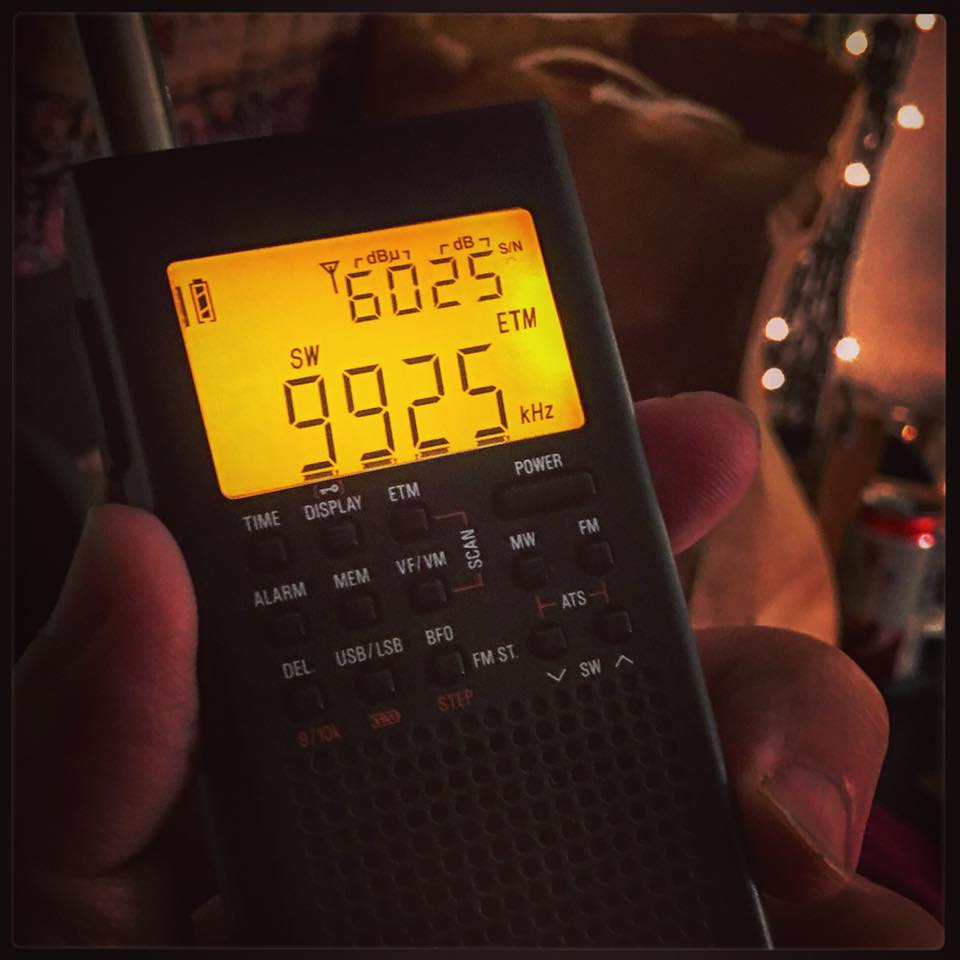 Welcome to program 3 of Shortwave Radiogram.

Here is the lineup for today's program, with MFSK modes as noted:

With the German Aerospace Center (DLR) expecting jet fuel demand
to increase 50 percent by 2030, environmental prospects for the
industry are dire.

But what if flying could be carbon-neutral; indeed,
climate-friendly? It's a little-known fact that this is possible.

To reach the goals of the Paris climate agreement to limit global
warming to well below 2 degrees Celsius, every person on Earth
would be limited to producing an average of only 2 tons of CO2
annually over the next 30 years.

However, a roundtrip between Berlin and New York in a relatively
efficient Airbus 380 generates greenhouse gases equaling some
three tons of CO2 in the environment. That's because, in addition
to the direct CO2 emissions (one ton CO2 equivalent), the flight
results in increased formation of ozone in the clouds (two tons).

A particular problem for air traffic is emissions is the high
altitude. In addition to CO2, production of nitrogen oxide
through jet engine exhaust produces ozone, a major cause of
global warming.

Contrails, or condensation trails, are also produced, which
create clouds made of ice crystals that can also trap greenhouse
gases, warming the climate.

Overall, the climate impact of jet fuel combustion is about three
times as high when planes are in the stratosphere than when they
are on the ground.

With climate-optimized flight routes, however, the negative
effects of flying can also be reduced and can "even go in the
opposite direction," according to Stefanie Meilinger of the
International Center for Sustainable Development at
Bonn-Rhein-Sieg University in Germany.

The greatest potential lies in preventing the creation of clouds.
"Condensation trails and fog clouds are formed out of ice
crystals in certain weather conditions," Meilinger explained.
Climate-optimized flight routes would work by avoiding such
weather, hence limiting cloud generation.

Beyond this, such clouds can have either a warming or cooling
effect on the climate.

That would depend on the substratum and ratio of different
reflections, she explained.

"If the solar radiation is reflected by clouds formed by plane
flight back into outer space, this has a cooling effect," she
said. "But if the Earth's radiation of heat into space is
hampered by clouds, the climate is further heated."

This all depends on the route the plane flies. "With our current
routes, we have an overall warming effect," Meilinger told DW.

Under the direction of DLR and in cooperation with the German
Meteorological Service (DWD) and the German Air Traffic Control
(Deutsche Flugsicherung), Meilinger has analyzed Lufthansa
flights to assess the possibility of designing air traffic routes
that limit climate damage. Ideally, they should even contribute
to climate protection.

The scientists simulated climate-optimized flight routes for
40,000 Lufthansa flights, which in models succeeded in reducing
the overall climate warming effects. "Even net-cooling air
traffic" was realized on some European routes, stated the report.

"On the one hand, there is the possibility to close particularly
climate-damaging air routes for air transport," explained Urban
Weißhaar, a flight route expert at Lufthansa Systems. "The other
possibility is the inclusion of cloud formation in emissions
trading."

This, however, would result in some effects on passengers and
airlines.

Cloud formation with climate impact could be priced, like CO2
emissions. Airlines with climate-friendly routes could gain an
advantage by paying less money for pollution certificates -
making any additional costs by a small detour very worthwhile.
For climate protection, at least.

Volker Grewe of DLR is in favor of reducing the climate impacts
of air travel.

"Simply speaking, if we can avoid regions in the atmosphere where
the so-called non-CO2 emissions have the greatest impacts on
climate change, we can significantly reduce this climate change,"
he explained.

With colleagues from five countries, Grewe is part of an EU
project that has been evaluating data from 800 daily
trans-Atlantic flights. As a result, he believes that "a
significant reduction in the climate impact of aviation is
possible at a relatively low cost."

Replacing jet fuel made from fossil fuels with more renewable
sources would also be a fundamental step on the road to
sustainable air travel.

In this regard, the production of jet fuel from biomass - or even
from wind and solar electricity - is widely developed and tested,
and is generally possible. In the latter case, climate-neutral
electricity is produced with the aid of electrolysis from water
hydrogen (power-to-gas), and in a further step, with the addition
of CO2 kerosine (power-to-liquids).

The production of this jet fuel on the shores of the sun-drenched
and windy countries of the world is "economically
cost-effective," said Norman Gerhardt of the Fraunhofer Institute
for Wind Energy and Energy Systems Engineering.

However, capacity for large-scale production would have to be
significantly built out, and he doubts that produced quantities
of such fuel would sufficiently match current demand.
Infographic power-to-gas

Integrating air traffic into emissions trading could be another
important way to achieve more climate-friendly air travel. One
proposal suggest that by 2020, all airlines should pay $10
(around 9 euros) per ton of CO2 emitted, but that the price of
these pollution permits should increase to $80 dollars per ton by
2030.

From 2025, other climate effects of air traffic such as cloud
formation would also be included in the emissions trading price.

Another important instrument for more climate protection is the
reduction of environmentally harmful subsidies.

According to data provided by Germany's Federal Environment
Agency (UBA), Germany subsidizes air flights to the tune of 12
billion euros per year - mainly by exempting ticket prices from
sales tax and jet fuel from energy tax.

The UBA recommends that the government abolish such benefits.
This would also level the playing field for other, more
climate-friendly modes of transport such as bus, car and train.

If these subsidies were slashed and income taxes reduced instead,
every worker in Germany would have more than 270 euros more to
take home each year.

To protect the climate, the UBA also recommends that people avoid
flying. "Take advantage of alternatives to flying: use different
modes of transport, vacation closer to home, or use video
conferencing for business meetings rather than traveling," is
their creed.


Image: Condensation trails from an Airbus A380 ...


Next, the same image that was previously transmitted in MFSK64
...

Diagnosing fungal infections, which kill 2 million people each
year and cost global agriculture more than $60 billion annually,
is a complex, expensive procedure; but, synthetic biology
researchers found a way to replace the specialized equipment with
a simple, one-component biosensor that could cost less than a
penny.

Writing in the journal Science Advances, Nili Ostrov, Miguel
Jimenez, Sonja Billerbeck and their coworkers at Columbia
University's Cornish Lab described how they genetically altered
yeast so it could detect disease-causing pathogens and turn red.
First, they swapped out one of the yeast's receptors for one that
recognized the pathogen Candida albicans, which can cause
life-threatening infections. Then, Ostov explained, "we
engineered into it the tomato pigment for red color called
lycopene, and when the yeast detects the pheromone of other
organisms in its surroundings, it will turn red." The change
happens in fewer than three hours.

By replacing the baker's yeast gene with similar genes from other
fungal species, the researchers showed the biosensor could detect
nine additional human, agricultural and food spoilage pathogens.
And the dipstick test detected pathogens in soil, urine, serum
and blood. It was still effective after being stored at room
temperature for 38 weeks.

Simplicity, however, was not the researchers' only goal.

Co-author Miguel Jimenez said, "The idea we had was really, could
we build a diagnostic device that was very, very cheap, basically
the cost of just the sugar that feeds the yeast and that would be
the only expensive reagent required? And we thought if it was so
cheap, people outside the lab could use it all the time for
continuous surveillance of pathogens."

Another advantage is the yeast-based tester could be easily
manufactured in developing countries, because, as Jimenez noted,
"Every country can make beer!"

The researchers have developed a prototype and are working to get
it to places that need it.


Image from the accompanying video ...

This is Shortwave Radiogram in MFSK16

Swedish carmaker Volvo says it is phasing out the internal
combustion engine in favor of electric motors by 2019.

Volvo, which is Chinese owned, is the first traditional carmaker
to announce the move.

"This announcement marks the end of the solely combustion
engine-powered car," said Volvo's president Håkan Samuelsson in a
statement Wednesday. "People increasingly demand electrified
cars, and we want to respond to our customers'current and future
needs.".

The company, which made a name for itself for emphasizing
passenger safety, said it will offer five electric cars between
2019 and 2021. Three will be branded as Volvo and the others will
be labeled as Polestar, the company's high-end brand.

The company said it will also offer plug-in hybrid or other
hybrid-type cars, some of which do use a small gas engine along
with a rechargeable battery.

The company says it will continue to make pure combustion engine
cars launched prior to 2019.

Geely, the Chinese company which has owned Volvo since 2010, was
likely an impetus for the move as electric vehicles have been
eagerly adopted in China due to high levels of air pollution.

According to Center for Automotive Research at Germany's
University of Duisberg-Essen, the country is home to half the
world's electric cars. China has said it wants 5 million electric
cars on Chinese roads by 2020.

Electric carmaker Tesla recently announced it was in talks to
build a plant near Shanghai.


Next, the same image as transmitted previously in MFSK16 ...

Thanks to colleagues at WRMI, Radio Miami International,
www.wrmi.net, and at Space Line in Bulgaria, www.spaceline.bg 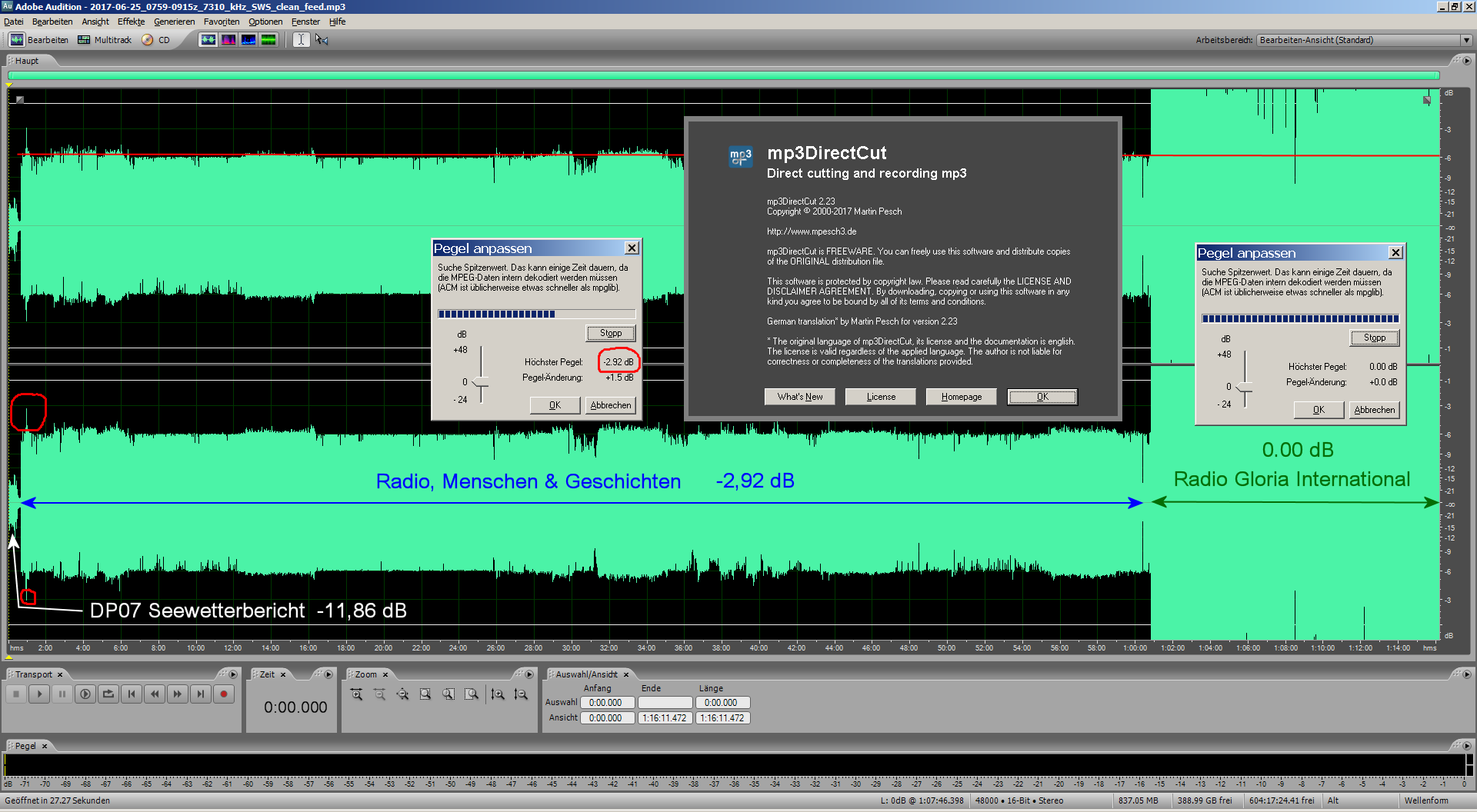 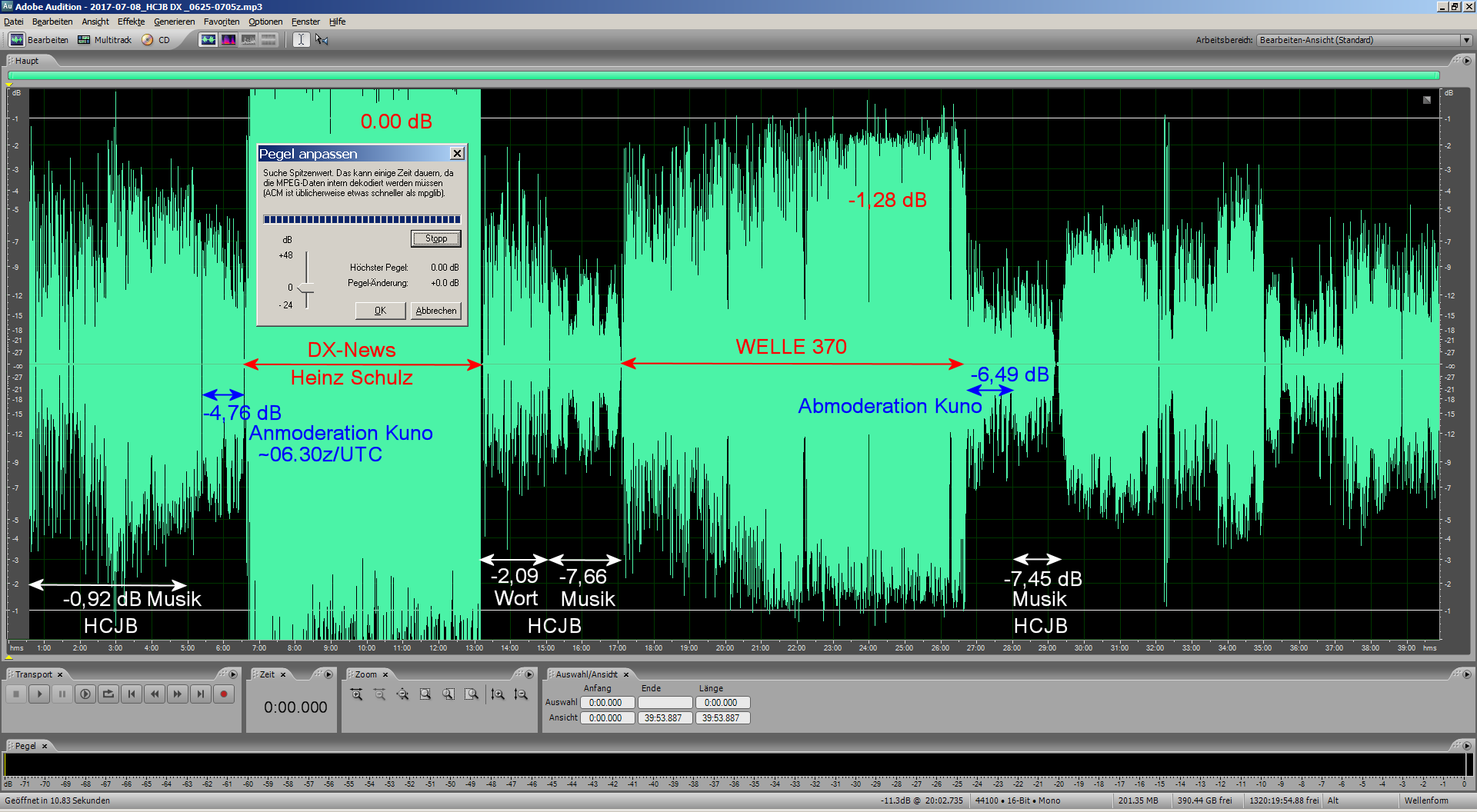 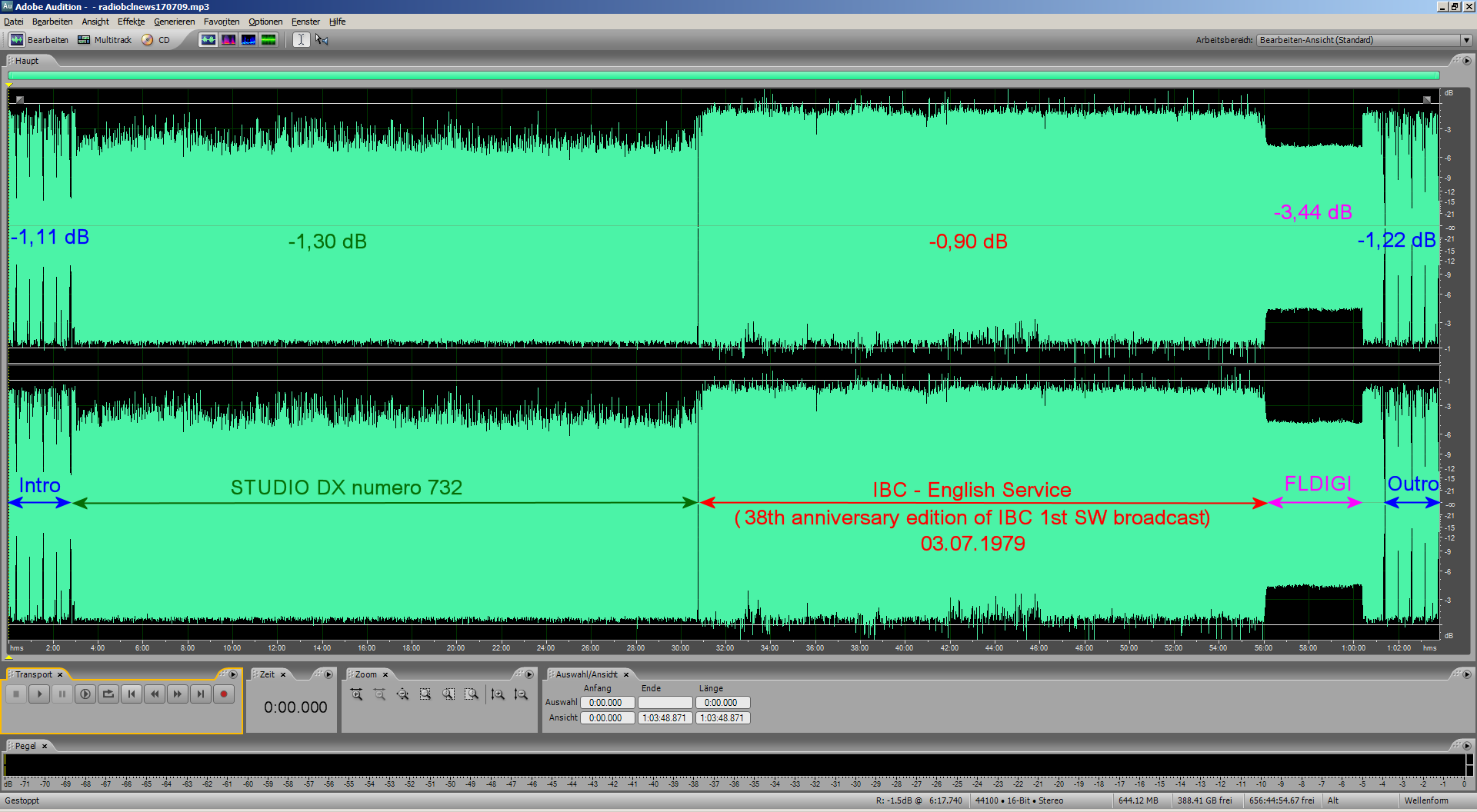