Instead of the usual image, here are two KBC waterfall IDs
contributed by @howtophil .

Welcome to program 7 of Shortwave Radiogram.

KASKASKIA RIVER STATE FISH AND WILDLIFE AREA - The Illinois
Department of Natural Resources is reintroducing a living fossil
into its waterways. The alligator gar is a fish so old, it's
thought to have evolved during the Early Cretaceous period, more
than a 100 million years ago.

Alligator gar are the second largest freshwater fish in North
America. Illinois fisheries biologist Randy Sauer says they
disappeared from the state's waterways in the 1990s, although
they continued to thrive in southern U.S. rivers.

"We want to restore the ecosystem because it is important to have
top predators to balance the species below them in order to keep
check on some more abundant species," he said.

Beyond that, alligator gar make for great big game fishing. The
diamond-scaled animals, which breathe both air and water, can
grow up to 2.7 meters and weigh more than 136 kilograms. In fact,
Sauer says, their large size is what did them in originally in
the state.

"It was pretty much extirpated out of its range because of
misconceptions about it eating sport fish," he said. "People
would target it and put bounties on it."

Everything is on the menu

The alligator gar is an opportunistic feeder, meaning it will eat
whatever it encounters — from an occasional turtle or small duck
to invasive species such as Asian and silver carp. Sauer hopes
the re-introduction program will help the state's efforts to
control the carp.

Because gar can live up to 60 years, this program is going to
take decades to fully expand.

"The (female) alligator gar does not sexually mature until 11
years, and the male not till 6 or 7 years," Sauer said, "so at
the outset of this project we're probably going to stock more
heavily than 10 or 20 years down the road when hopefully these
fish will find each other and start doing the job on their own."

To date, 7,000 alligator gar fingerlings have been fitted with
tiny transponder tags so that they can be tracked and then
released into Illinois waterways. As it rains and floods,
biologists expect some of the fish to follow the rivers all the
way down to join other populations in Louisiana and Texas.


Image of caught alligator gar from the accompanying video ...

Apple, Inc. has confirmed that it is removing some applications
providing virtual personal networks, or VPNs, from its China App
Store, to comply with new Chinese regulations — a move critics
say is capitulating to internet censorship.

Apple confirmed the move in an email to National Public Radio on
Saturday, after several VPN providers announced that their apps
had been removed from the China App Store.

Software made outside China can sometimes be used to get around
China's domestic internet firewalls that block content that the
government finds objectionable. Critics call China's "great
firewall" one of the world's most advanced censorship systems.

"Earlier this year," Apple said, "China's MIIT [Ministry of
Industry and Information Technology] announced that all
developers offering VPNs must obtain a license from the
government. We have been required to remove some VPN apps in
China that do not meet the new regulations."

App maker Express VPN said in a blog post that its app was
removed from the China Apple Store, and it noted that
"preliminary research indicates that all major VPN apps for iOS
[Apple operating systems] have been removed."

The statement continued, "We're disappointed in this development,
as it represents the most drastic measure the Chinese government
has taken to block the use of VPNs to date, and we are troubled
to see Apple aiding China's censorship efforts."

Another company, Star VPN, also announced it had been contacted
by Apple with the same notice.

Golden Frog, a company that makes security software, told the New
York Times that its app also had been taken down from the China
App Store.

"We gladly filed an amicus brief in support of Apple and their
backdoor encryption battle with the FBI, so we are extremely
disappointed that Apple has bowed to pressure from China to
remove VPN apps without citing any Chinese law or regulation that
makes VPN illegal," said Sunday Yokubaitis, president of the
company.

The Times reports that this is the first time China has
successfully used its influence with a major foreign technology
platform such as Apple, to flex its muscle with software makers.

China is Apple's largest market outside the United States.

The ghostly radio station that no one seems to run

"MDZhB" has been broadcasting since 1982. No one knows why.

In the middle of a Russian swampland, not far from the city of St
Petersburg, is a rectangular iron gate. Beyond its rusted bars is
a collection of radio towers, abandoned buildings and power lines
bordered by a dry-stone wall. This sinister location is the focus
of a mystery which stretches back to the height of the Cold War.

It is thought to be the headquarters of a radio station, "MDZhB",
that no-one has ever claimed to run. Twenty-four hours a day,
seven days a week, for the last three-and-a-half decades, it's
been broadcasting a dull, monotonous tone. Every few seconds it's
joined by a second sound, like some ghostly ship sounding its
foghorn. Then the drone continues.

Once or twice a week, a man or woman will read out some words in
Russian, such as "dinghy" or "farming specialist". And that's it.
Anyone, anywhere in the world can listen in, simply by tuning a
radio to the frequency 4625 kHz.

It's so enigmatic, it's as if it was designed with conspiracy
theorists in mind. Today the station has an online following
numbering in the tens of thousands, who know it affectionately as
"the Buzzer". It joins two similar mystery stations, "the Pip"
and the "Squeaky Wheel". As their fans readily admit themselves,
they have absolutely no idea what they are listening to.

In fact, no-one does. "There's absolutely no information in the
signal," says David Stupples, an expert in signals intelligence
from City University, London.

The frequency is thought to belong to the Russian military,
though they've never actually admitted this. It first began
broadcasting at the close of the Cold War, when communism was in
decline. Today it's transmitted from two locations – the St
Petersburg site and a location near Moscow. Bizarrely, after the
collapse of the Soviet Union, rather than shutting down, the
station's activity sharply increased.

Some millennials are discovering TV antennas

The Wall Street Journal reports that millennials have unearthed
an amazing hack to get free TV: the Antenna - But is it Legal? it
seems 29% aren't sure

Dan Sisco has discovered a technology that allows him to access
half a dozen major TV channels, completely free.

"I was just kind of surprised that this is technology that
exists," says Mr. Sisco, 28 years old. "It's been awesome. It
doesn't log out and it doesn't skip."

Let's hear a round of applause for TV antennas, often called
"rabbit ears," a technology invented roughly seven decades ago,
long before there was even a cord to be cut, which had been
consigned to the technology trash can along with cassette tapes
and VCRs.

The antenna is mounting a quiet comeback, propelled by a
generation that never knew life before cable television, and who
primarily watch Netflix , Hulu and HBO via the internet.

Almost a third of Americans (29%) are unaware local TV is
available free, according to a June survey by the National
Association of Broadcasters, an industry trade group.

Image: There is no satellite dish or cable connection at the
Elliott household. Instead, we use something like this ...

This is Shortwave Radiogram in MFSK16 ...

According to Scientific American, six tiny "Sprite" satellites,
each consisting of a 4-gram circuit board but packed with
electronics, were deployed in late June. The Sprites are the
brainchild of Zac Manchester, KD2BHC.

The Sprites went into low-Earth orbit as secondary payloads on
the Latvian Venta and Italian Max Valier satellites, launched
from India. Signals on 437.325 MHz from at least one of the
exterior-mounted Sprites have been received in California and New
York.

Manchester launched 104 Sprites into orbit in 2014 aboard
KickSat-1, but they failed to deploy.


This is Shortwave Radiogram in MFSK32. 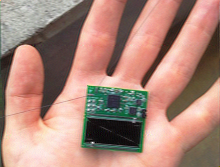