This weekend on Shortwave Radiogram, the subject is U.S. airlines
that no longer exist.

The once famous Pan Am brand now belongs to a freight railroad in
the northeast USA ...


Welcome to program 10 of Shortwave Radiogram.


Today on Shortwave Radiogram is the second of two summer special
programs consisting mostly of images.

This program looks at several U.S. airlines that no longer exist.

The airlines included in this half hour include international
airlines with which Shortwave Radiogram outside the United States
might be familiar.

There will also be airlines on which I have traveled or that I
remember for one reason or another.

Because of time limitations, I will not try to explain the
reasons for the demise of each airline. In some cases, the
airline was absorbed in a merger.

I refer you to a very helpful Wikipedia article about defunct
airlines in the United States ...

... and especially to the links, that will lead you to more
information about each airline.

Shortwave Radiogram program 10 is now ready for boarding, except
that we have to wait for the cheap seats at the back of the plane
...


Pan Am World Airways was founded in 1927 and eventually became
the "unofficial overseas flag carrier of the United States." Pan
Am declared bankruptcy and shut down operations in 1991 ...

Trans World Airlines (TWA) rivaled Pan Am for international
flights. In 1988, it "carried more than 50% of all trans-Atlantic
passengers." Much of this traffic was fed by TWA's domestic US
flights. After financial difficulties, TWA was absorbed by
American Airlines in 2001 ...

Northwest Airlines, founded in 1926, was originally known for its
flights to Asia. Thus for many years it was branded as Northwest
Orient Airlines. Flights across the Atlantic eventually were
added. In 2008, Northwest was absorbed by merger into Delta
Airlines. ...

National Airlines operated from 1934 to 1980, In addition to its
domestic routes, from 1970 to 1978 National was, with Pan Am and
TWA, the only U.S. airlines that operated scheduled passenger
flights to Europe. In 1980, Pan Am took over the National fleet
and route network ...

Braniff Airways operated from 1928 and, as Braniff International,
was known for its flights to Latin America, in addition to
domestic flights in the midwestern and southwestern USA. The
airline was also known for its colorful livery. Braniff ceased
operations in 1982, although other companies used the name for
limited periods after 1982. (My first ride on an airplane was a
Braniff flight from Chicago to Kansas City in 1965.) ... 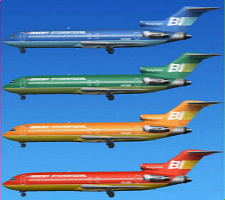 
Piedmont Airlines, based in North Carolina, began operations in
1948. It was known especially for its customer loyalty (perhaps
because it provided passengers with entire 12-ounce cans of soft
drinks rather than just a the small plastic cup). Eventually its
routes expanded into the western United States and even into the
Bahamas and Bermuda. It was merged into USAir in 1989. In 1974, I
flew on one of Piedmont's Japanese-built YS11As, shown in this
image ...

Allegheny Airlines began passenger operations in 1952. Its hub
and operational center were in Pittsburgh, although its
headquarters were in Washington DC. Most of the airline's flights
were in the northeastern USA. ...

As Allegheny's routes expanded to the west and even into Canada,
and to shed its regional image, the airline's name was changed in
1979 to USAir. That became US Airways in 1997. Flights to Europe
were added. The US Airways name prevailed after a merger with
America West airlines in 2005, but disappeared after the airline
was absorbed into American Airlines in 2015 ...

North Central Airlines was founded in 1944. Based in
Minneapolis, it served sections of the USA indicated by its name.
North Central was known by the "Herman the duck" logo on the
tails of its aircraft. North Central merged with Southern Airways
in 1979 to become Republic Airlines (but keeping Herman the
duck). Republic was absorbed by Northwest Airlines in 1986.

Ozark Airlines began operations in 1950 and served the
midsection of America from its St. Louis hub. In 1986, Ozark
merged into TWA, which also had its main hub in St. Louis.