My wife, son, and I just traveled in this little car all the way
from Virginia to Colorado.

We left son and car in Colorado, where he begins graduate school.
Wife and I flew back.

Welcome to program 12 of Shortwave Radiogram.

The sun has emitted two huge solar flares - one of which was the
biggest in more than a decade. While solar flares and winds don’t
really pose a direct risk to human health, they could bring down
communications.

The two bursts of radiation from the sun were so intense that
high-frequency blackouts were experienced on Earth, lasting for
about an hour.

Both were X-class flares – the most intense classification of
coronal ejection – with the second being the biggest observed
since 2006.

NASA's Solar Dynamics Observatory, which is constantly looking at
the sun, captured images of both events.

Image: X2.2 and the X9.3 flares emitted by the Sun on 6 September
2017. The imagery was captured by NASA's Solar Dynamics
Observatory and shows light in the 131 angstrom wavelength ... 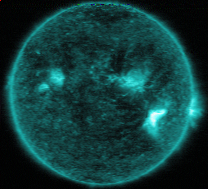 Both professional and citizen scientists conducted formal and
informal investigations into the effect of the August 21 solar
eclipse on HF radio propagation. Nathaniel Frissell, W2NAF, of
HamSCI, has said it will take some time to get a more scientific
analysis of data compiled during the Solar Eclipse QSO Party.
Frissell and others are investigating whether the sudden absence
of sunlight during the eclipse — and especially of solar
ultra-violet and x-rays — would briefly change the properties of
the upper atmosphere. Professional ionospheric researcher Phil
Erickson, W1PJE, of the Atmospheric Sciences Group at MIT’s
Haystack Observatory, said he can say categorically that there
was a definite, large, and measurable effect in the ionosphere
from the eclipse.

"We saw a 2X reduction in electron density during the eclipse for
at least 45 minutes to 1 hour," Erickson told ARRL. "This
reduction had direct impacts on HF propagation along the bottom
side." Erickson said many models and observations exist from
previous eclipses that demonstrate these effects. Erickson said
MIT researchers used a "megawatt-class Thomson scatter radar"
which can directly measure the plasma state of the ionosphere,
including electron density, across a huge area in the eastern US.

"Scientists in the worldwide space physics community will be
using these and many other eclipse observations to learn more
about our ionosphere, space weather, and its effects on
navigation and communication signals including amateur radio,"
Erickson said. He has shared his data with the HamSCI team.

Bob Reif, W1XP, was in North Carolina where the eclipse totality
was about 97%. "I had two radios running multi bands of WSPR," he
reported. "Lots of data to look at, but what jumped out was that
at almost the exact time of maximum coverage of the sun at this
location, 160 meters opened for about 30 minutes and then closed
down again till the normal gray line. So the D layer responded to
the shadow of the moon to some extent."

Gene Greneker, K4MOG, in Georgia told ARRL that his own eclipse
experiment "worked out rather well." He set up an RFSpace NetSDR
receiver at his location, locked to a 10-MHz GPS standard and
tuned to WWV on 15 MHz. "The NetSDR provides in-phase and
quadrature components of the WWV signal, which allows relative
signal phase to be reconstructed from recorded data," Greneker
explained in a more-detailed account.

"Signal phase-vector rotation change was chosen to indicate
totality arrival, because phase is very sensitive to any change
in propagation path length, possibly caused by ionospheric
movement, up or down. Solar presence or absence can cause
vertical ionospheric movement."

Greneker recording the phase of the 15-MHz WWV signal from 1800
UTC until 1900 UTC on August 21. "Each time the path length
changes by 1 wavelength, there is a 360° change in the phase of
the signal," he said. Greneker offset the path of totality to the
south, running parallel to the path between WWV in Fort Collins,
Colorado and his location in Atlanta.

Greneker assumed that the reflection point off the ionosphere was
south of Kansas City, and, he said, the minimum dip in the phase
record occurred very close to totality at that location. "At 1809
hours UTC, when the totality point was parallel to the midpoint
of the propagation path, the path length increased from zero
wavelengths to 157 wavelengths, or 3,140 meters, during the
intervening 9 minutes." He reported. As totality moved southeast
solar radiation began to increase and the path length decreases
as the ionospheric reflecting point moves downward.

Bob Skaggs, KB5RX, told ARRL he spent about 4 hours in the
central part of Mission Valley, Montana, listening to
conversations on various 20-meter frequencies with a low antenna.
"At maximum of the eclipse the propagation went almost to nothing
for maybe about 15 or 20 minutes," he said. "As the eclipse
resided, signals came back up." Skaggs tried 17 meters for 5
minutes at 1800 UTC and heard "no signals at all."

He also said the local animal population responded to the eclipse
as if evening were approaching.

Kim's note: On my cousin's farm near St. Joseph, Missouri, the
horses and mule were restless during the full eclipse. But that's
because the neighbors shot fireworks during the complete
darkness. 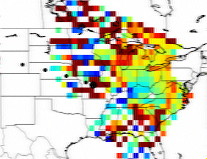 
Kim: The voice you hear at the beginning of each Shortwave
Radiogram ("From somewhere in the ionosphere ... ") is Jim Cutler
-- https://www.jimcutler.com/ .

Jim is a voice actor and professional photographer. He visited
the TWA terminal at JFK International Airport in New York when it
was recently opened to the public -- before being converted to a
hotel. TWA ceased operations on 2001. It was one of the airlines
included in the SWRG10 show about defunct U.S. airlines.

Jim writes: "The TWA Flight Center was the pinnacle of 1960’s
cool and style. The agents and flight attendants dressed exactly
how you’d expect for the proud showpiece of TWA. The lounges are
still there. The red plush carpet is, too. The red seating areas
and the mind-blowing architectural angles and lines are there,
and in great shape."

Here is one of the photos: "The long tunnel over to the terminal
still features the signature plush red carpet. All the tunnel
lights work. Whoever maintains the unused facility keeps it clean
and has done a great job." ...

Kim: On this weekend with hurricanes in the news, we look back at
the odyssey of Hurricane Ivan of 2004. It formed on 2 September
as a tropical depression, made landfall in Alabama as a category
3 hurricane on 16 September, and weakened while crossing the
United States. But it reformed when it re-entered the Atlantic
Ocean, and on 23 September, it made landfall again, in Lousiana,
as a tropical depression.


Image: The track of Hurricane Ivan ...

Another weather phenomenon this week is the high temperatures
in western North America, with associated wildfires. This photo
of the sun through the haze was taken by my son Ian, starting
graduate school at the University of Colorado in Boulder. He
wrote, "It smelled pretty strong, too." ... 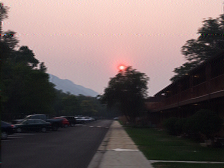