Welcome to program 14 of Shortwave Radiogram.

A fleet of tiny spacecraft could visit over 300 asteroids in just
over three years, according to a mission study led by the Finnish
Meteorological Institute. The Asteroid Touring Nanosat Fleet
concept comprises 50 spacecraft propelled by innovative electric
solar wind sails (E-sails) and equipped with instruments to take
images and collect spectroscopic data on the composition of the
asteroids. Each nanosat would visit six or seven asteroids before
returning to Earth to deliver the data. The concept will be
presented by Dr Pekka Janhunen at the European Planetary Science
Congress (EPSC) 2017 in Riga on Tuesday 19th September.

"Asteroids are very diverse and, to date, we've only seen a small
number at close range. To understand them better, we need to
study a large number in situ. The only way to do this affordably
is by using small spacecraft," says Janhunen.

In the mission scenario, the nanosats flyby their target
asteroids at a range of around 1000 kilometres. Each nanosat
carries a 4-centimetre telescope capable of imaging the surface
of asteroids with a resolution of 100 metres or better. An
infrared spectrometer analyses spectral signatures in light
reflected or emitted by the asteroid to determine its mineralogy.
The instruments can be pointed at the target using two internal
reaction wheels inside the nanosats.

"The nanosats could gather a great deal of information about the
asteroids they encounter during their tour, including the overall
size and shape, whether there are craters on the surface or dust,
whether there are any moons, and whether the asteroids are
primitive bodies or a rubble pile. They would also gather data on
the chemical composition of surface features, such as whether the
spectral signature of water is present," says Janhunen.

E-sails make use of the solar wind - a stream of electrically
charged particles emitted from the Sun - to generate efficient
propulsion without need for propellant. Thrust is generated by
the slow rotation of a tether, attached at one end to a main
spacecraft carrying an electron emitter and a high-voltage source
and at the other to a small remote unit. The spinning tether
completes a rotation in about 50 minutes, tracing out a broad,
shallow cone around a centre of mass close to the main
spacecraft. By altering its orientation in relation to the solar
wind, the nanosat can change thrust and direction.

The thrust generated by E-sails is small; a 5 kilogramme
spacecraft with a 20-kilometre tether would give an acceleration
of 1 millimetre per second at the distance of the Earth from the
Sun. However, calculations show that, on top of the initial boost
from launch, this is enough for the spacecraft to complete a tour
through the asteroid belt and back to Earth in 3.2 years.

Nanosatellites do not have the capacity for a large antenna, so
the concept includes a final flyby of Earth to download the data.
The overall mission would cost around 60 million Euros, including
launch, giving a cost of about 200,000 Euros for each asteroid
visited.

"The cost of a conventional, state-of-the-art mission to visit
this number of asteroids could run into billions. This mission
architecture, using a fleet of nanosats and innovative
propulsion, would reduce the cost to just a few hundred thousand
Euros per asteroid. Yet the value of the science gathered would
be immense," says Janhunen.

Image: Artist's concept of the spacecraft ...

Little nuts with a big impact

When you stroll through a German forest in fall, they can be as
numerous as the brown leaves that cover the forest floor: acorns.
These leathery nuts that contain the seeds of oak trees are such
a common sight that few people would even bother picking one up
during an afternoon walk.

But it is this ubiquity, which makes them crucial to many
ecosystems. If they abound, life is good. When they are scarce,
life gets hard.

Many animals feed on the brown nuts, including certain bird
species and small mammals like mice. But perhaps most famous
among acorn-munching rodents are squirrels and chipmunks,
although, deer, wild boar and even bears gorge themselves on the
nutritious nuts as well.

Acorns are a popular food source, not just for small rodents but
deer, wild boars and even bears, too

Nutritious — if you can handle them

Acorns are an attractive food source because they provide a lot
of protein, carbohydrates and fats, as well as minerals and
vitamins. On the downside, they also contain bitter tannins,
which many species struggle to digest (including humans). When
cattle eat large amounts of acorns, the tannic acid produced
during digestion can cause kidney failure, for example.

Obviously oak trees don't produce the nutritious nuts to feed the
animals that live around them. They want to spread their seeds
and since the wind won't carry the heavy nuts, they have to count
on the hungry animals in the forest to do it for them.

When the nuts are eaten by deer or wild boar, that doesn't work
so well as they will gobble up the whole acorn, seed and all.
Squirrels, on the other hand, are a different story.

When they get the chance, the little rodents will eat the seeds
as well but they also like to hoard the nuts in many different
caches as a reserve for when food is scarce. Putting them in many
different places has the advantage of reducing the risk of all
their reserves being discovered by another hungry
acorn-aficionado.

The animals are generally very good at remembering where they've
squirreled away their stashes. Still, occasionally, they will
forget a cache, or worse, succumb to a predator or another cause
of death before they can retrieve all of their nuts.

That's when the acorn gets its chance to grown into a mighty oak.

An American Aerosol in Paris

On September 5, 2017, residents of the Pacific Northwest awoke to
ash falling from the sky like snow. But even as ash hit the
ground, wildfires burning across the western United States and
Canada lofted smoke high into the atmosphere. Some of it drifted
all the way to Europe.

Snapshots of the smoke's intercontinental journey are shown in
the maps above. The data were collected from September 4-7 by the
Ozone Mapping Profiler Suite (OMPS) on the Suomi NPP satellite.
The maps show relative aerosol concentrations, with lower
concentrations in yellow and higher concentrations in dark
orange-brown.

Throughout the series, high concentrations of aerosols appear
over their sources in the Pacific Northwest. But prevailing winds
also swept up the high-altitude smoke aerosols and carried them
east across the continent. On September 4, the smoke appears to
have arrived over the U.S. Midwest, and by September 5 it reached
Newfoundland. By September 6, the smoke cloud is obvious over the
middle of the Atlantic Ocean.

"You can see that the smoke cloud on September 6 is part of the
long stream of smoke emanating from the Pacific Northwest," said
Colin Seftor, an atmospheric scientist working for NASA's Goddard
Space Flight Center. "It almost looks like it was flung across
the Atlantic."

By September 7, the smoke had arrived over Ireland, the United
Kingdom, and northern France. These aerosols are high in the
atmosphere, so they are not a serious concern for near-ground air
quality and human health. Still, it shows how events on one
continent can have effects halfway around the world.

"It's not that uncommon for smoke from fires in North America to
reach Europe," Seftor said. He has casually noticed, however,
that the smoke clouds reaching Europe this year seem to be larger
and thicker. He also points out that they seem to be more
persistent; large fires in mid-August sent smoke to Europe that
hung around for days.

Wildfires were burning long before these maps were compiled, and
they continue to burn even now. This natural-color image shows
smoke across the upper Midwest on September 13, 2017, as observed
by the Moderate Resolution Imaging Spectroradiometer (MODIS) on
NASA's Aqua satellite. Record heat in parts of the U.S. West has
been cited as a possible cause for the widespread fire activity
this year—which was somewhat unexpected, given the region's wet
winter and spring.

"There has been a lot of smoke over the whole northern hemisphere
this year, and that is somewhat striking to me," Seftor said.
"It's going to take awhile for everything to dissipate."

Rockwell Collins to be Sold to United Technologies

United Technologies has announced plans to acquire avionics maker
Rockwell Collins in a $30-billion deal set to be consummated in
2018. United Technologies said it wants to further enhance its
role in aviation for both its military and commercial customers
in the area of new aircraft connectivity systems.

Collins Radio Company was purchased by Rockwell International in
1973. In 2001, the avionics division of Rockwell International
was spun off to form Rockwell Collins. In its Amateur Radio
heyday, the Collins S-Line was considered the king of the hill.
Vintage Collins gear remains popular, and Collins mechanical
filters are still widely used.


Lenin on Linen: An Artist Remembers Her Soviet Childhood

Two weeks after 14-year-old Zoya Cherkassky-Nnadi and her family
left Kyiv for a new life in Israel, the U.S.S.R collapsed.
Recently, the artist drew on memories of her Soviet childhood in
a series of paintings that have captivated the Russian-speaking
Internet.

A young dissident tuning into Radio Liberty, which is also the
name of the painting. 'We believed in something that didn’t
exist, because no-one had been to the West,' Cherkassky-Nnadi
said. 'People thought that things were the same in the West, but
somehow better. But now I have lived the majority of my life in
the capitalist world and I have a lot of criticism towards this
system.' ... 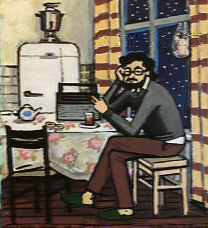