Welcome to program 21 of Shortwave Radiogram.

What to call the Persian language in Afghanistan? It's a question
Afghans have grappled with and sparred over for decades.

The long-simmering dispute was reignited after the BBC changed
the name of one of its local-language Facebook pages to BBC Dari,
prompting a backlash from many Afghan Persian speakers who
despise the word officially used to describe their language.

Many Persian speakers in Afghanistan prefer and use the name
Farsi, the official language in Iran. They say the term Dari has
been forced on them by the dominant Pashtun ethnic group as an
attempt to distance Afghans from their cultural, linguistic, and
historical ties to the Persian-speaking world, which includes
Iran and Tajikistan.

Language has long been a sore point in Afghanistan, where it has
exposed unresolved tensions among the country's ethnic and
linguistic groups.

"Dari is not the Afghan dialect of Farsi," says Partaw Naderi, a
prominent Afghan poet and minority-rights activist. "Dari is the
name of a language that is also known as Farsi."

Naderi says historical documents prove that the word Dari, along
with Parsi, dates as far back as the sixth century, when it was
used to describe the Persian language. After the language adopted
the Arabic script centuries later, it fell out of use and was
replaced by the term Farsi.

Naderi says he prefers to use the word "Farsi-Dari" to describe
the Persian language, calling it a solution to the current
standoff. Any change would require a constitutional amendment.

Naderi says that while the Persian spoken in Afghanistan and
neighboring Iran have distinct accents and variations in
vocabulary and usage, the language is the same. There are dozens
of regional variations of Persian inside Iran and Afghanistan,
Naderi says.

Dari became an official language in Afghanistan in the country's
1964 constitution. Two earlier constitutions in the 20th century
had labeled it Farsi. ...

Mina Baktash, head of the BBC's Afghan service, said on November
4 that there were "absolutely no political and cultural reasons
behind our decision" and added that the term Dari was the
official name of the language in Afghanistan.

But that has not ended the criticism of the BBC.

The Private Arman-e Melli daily newspaper accused the BBC of a
"plot to divide Dari from the Persian language."

"The people in Afghanistan, Iran, and Tajikistan speak Dari,
which is the Persian language," said an editorial published on
November 5. ...

Sample of text from the BBC Dari Facebook page ...

The epic WSPR-carrying Canada C3 voyage of the Polar Prince to
commemorate Canada's 150th Anniversary of Confederation
celebration ended successfully on October 28. Over the course of
the 150-day expedition from Toronto, Ontario, to Victoria,
British Columbia via the Northwest Passage, the CG3EXP WSPR HF
beacon was received on every continent except Antarctica, CG3EXP
trustee Barrie Crampton, VE3BSB, told ARRL this week.

"The Ultimate 3S beacon transmitter made 64,800 transmissions
that resulted in 397,964 uploads to WSPRnet.org," Crampton said.
The CG3EXP WSPR beacon — which transmitted on 40, 30, and 20
meters — provided an opportunity for the Amateur Radio community
to follow the vessel's progress and share in the celebration.

However, the end of the voyage does not mean the end of the
beacon's transmissions. Crampton said the CG3EXP beacon "will
likely remain on the air as the Polar Prince returns to the east
coast of Canada via the Panama Canal."

The deadline for Radio Amateurs of Canada (RAC) Canada C3
Expedition Award submissions is November 30. The purpose of the
award was to track the voyage of the Polar Prince from Toronto to
Victoria and to study radio propagation in the Arctic regions of
Canada. Stations listened for WSPR signals from CG3EXP and
recorded the 6-character Maidenhead grid square that was
transmitted, as well as the location of the ship at the time of
the reception.

The WSPR beacon consists of a QRP Labs Kits U3S beacon
transmitter. The antenna is a 30-meter resonant end-fed dipole
from MyAntennas.com, sloping at 62° up to the mid-mast.

Earlier this year, Crampton explained that the Polar Prince did
not carry a full-blown Amateur Radio station because of
logistics, space, technical requirements, and the fact that many
other groups also wanted their research projects on board. A WSPR
beacon was far easier to implement, he said. Also, he quipped, it
"doesn't eat, sleep, get seasick, or need a bunk." 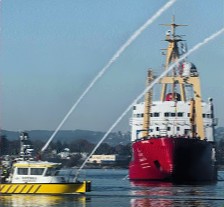 North Korean authorities have recently installed power meters in
Pyongyang and are charging more for electricity in a bid to
update an aging and inefficient system for measuring power
consumption, North Korean sources say.

Residents had previously used electric power with little care for
savings because the rates charged were low and based on estimates
of likely cost, one Pyongyang resident told RFA's Korean Service.

Now, however, consumption is being precisely measured and rates
have risen sharply, RFA's source said, speaking on condition of
anonymity.

"These days, city residents try to save electricity any way they
can. They are purchasing energy-efficient lighting and turning
off unnecessary lights to save energy," he said.

"In the past, Ministry of Electric Power Industry staff would
visit every household to count the number of lights and
electrical appliances, and would charge rates based on estimates
of what the household would use in the coming month," the source
said.

Use was charged at a rate of 0.12 North Korean won per one
kilowatt hour (with approximately 8,000 won equaling U.S. $1.00),
the source said, adding, "The cost was so low as to be almost
free, but the calculated costs were never accurate."

Rates have now increased to 35 won per one kilowatt hour, and if
usage exceeds 100 kilowatt hours, a progressive charge of 350 won
per kilowatt hour will be applied, he said.

"It will be interesting to see if Kim Jong Un will be able to do
what his father couldn't," RFA's source said, also speaking on
condition he not be named.

Water consumption in North Korea is still being charged according
to the older method, however, the source said.

"The bill is roughly estimated by counting the number of people
in each household, and the water bill is very low, so the
residents end up wasting water."

North Korean authorities are aware of the problem, but it is too
costly for now to install power meters and water meters
nationwide, he said. 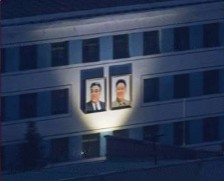 And on the subject of electric power, this photo: 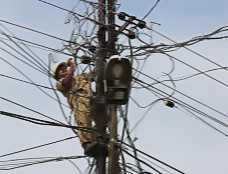