5B4 - Celebrating the Christmas season, Alex 5B4ALX) is active as 5B4XMAS
until 31 December. He operates SSB, CW and digital modes on all
bands. QSL via Club Log's OQRS, or via IZ4AMS (more information on
http://www.5b4alx.cloud/).
6W  - Once again Earl, WA3DX will be touring Senegal between 25 December
and 12 January and will be active holiday style as 6W1/WA3DX from
Dakar, as 6W7/WA3DX from Mbao, as 6W6/WA3DX from Kaolack and the
Saloum Islands (not IOTA). He will operate SSB, PSK and SSTV on
40-10 metres. QSL direct to WA3DX.
A7  - A team from the Qatar Amateur Radio Society will be active again as
A70X from Al-Safliyah Island (Yo8) on 1-6 tatry. QSL via
M0OXO's OQRS.
G   - The Welland Valley Amateur Radio Society will host a series of
special event stations in 2018 to mark the end of World War I, and
in remembrance of the millions who were killed or wounded. A total
of twelve special call signs have been applied for and will be put
on air during the year: GB1GW (January), GB1FWW (February), GB2GW
(March), GB2FWW (April), GB4GW (May), GB4FWW (June), GB5GW (July),
GB5FWW (August), GB6GW (September), GB6FWW (October) and GB8GW
(November), plus GB0AD on 10-11 November to mark Armistice Day. See
http://www.qrz.com/db/GB1GW for QSLling options and details about
the certificates available for contacting the special callsigns.
H40 - Cezar, VE3LYC will be active from Taumako Island (OC-179), Temotu
for at least five days in early May 2018. He plans to
operate CW and SSB on 40-10m. Bookmark http://oc-179.weebly.com for
more information and updates.
H44 - Shane, VK4KHZ is active again as H44DA from Busuone on Malaita
Island (OC-047), Solomon Islands until early January. "My primary
interest is still 6m SSB", he says, "and when 6m is quiet I will
most likely be on HF (10, 15, 20, 40, & 80m) or on SO50 satellite".
This is not a DXpedition, but Shane's annual holiday: "I will be
operating the radio only as time permits and when doing so,
training the locals in the operation of the equipment so please be
patient and courteous". QSL direct only to VK4KHZ.
PJ7 - Vadym, UT6UD will be active as PJ7/UT6UD from Sint Maarten (NA-105)
from 30 December to 13 January. He will be QRV on 160-17 metres CW
and SSB. QSL via LoTW, or direct to home call (see qrz.com for
PayPal instructions).
T8  - Ryosei, JH0IXE will be active again as T8CW from Koror (OC-009),
Palau from 27 December to 5 January. QSL via JA2KCT (bureau) or
JH0IXE (direct), LoTW and eQSL; logsearch on http://t8cw.idou.net.


May 2018 be a good year for shortwave and for KBC listeners!

Welcome to program 28 of Shortwave Radiogram.

Here is the lineup for today's program, all in MFSK32

As part of 50th celebrations, radio broadcaster 4KZ in Northern
Queensland is now on 5055 kHz and already getting signal reports
including from North America and New Zealand.

General Manager of NQ Radio (4KZ, 4AM, 4AY, KIK FM & KOOL FM), Al
Kirton announced the decision to SWLing Post in May, and now
confirms the transmission began on December 20.

He told the WIA: "Unfortunately we are on half power for a couple
of weeks until one of the RF boards can be repaired, then we will
go up to I kW."

The shortwave broadcast is from a site at east Innisfail in
Tropical North Queensland. Mr Kirton said the USA-made 1.2 kW
transmitter being used is feeding an Inverted V antenna at about
14 metres high at the peak.

The program is from the 4KZ and 4AY AM band transmitters and
designed to cover the Cape York area and the northern outback.
However the 60m band signal has been heard further away.

He said: "I have had many reception reports, many with audio
clips", some from Queensland, Northern Territory, New South Wales
and Victoria, as well as from "Monterey USA, Alberta Canada and
New Zealand."

The transmission hours are about 0500 to 2300 hours UTC. All
confirmed reception reports will receive a 4KZ shortwave QSL
card. No return postage is required.

The Australian Broadcasting Corporation stopped its shortwave
services to the northern outback in January 2017.

Image: Map of Australia showing the location of Innisfail,
Queensland ... 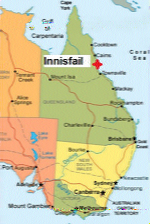 Radio Caroline returns to the airwaves

Legendary pirate station Radio Caroline returned to
analogue radio, broadcasting on a frequency formerly used by the
BBC World Service. It's all legit now though, the station's
pirating days are long behind it.

The original offshore pirate station's appearance on medium wave
frequency 648kHz is the conclusion of a long campaign, started
with an early day motion in Parliament by Tracey Crouch MP in
2010.

Broadcasting online for more than a decade now, the station has
had various temporary licences on the more conventional airwaves,
and for the last couple of years a regular weekend spot on the
Isle Of Man's Manx Radio. However, this is the first time it's
been permanently available on AM since its pirate days came to an
end in the early 90s.

Currently operating on a local licence, allowing it to broadcast
to Suffolk and North Essex, Radio Caroline boss Peter Moore noted
the "ironic twist" of the station being given a former BBC
frequency – Radio 1 having been launched in 1967 in direct
response to the popularity of pirate stations.

"The unlikely return of Caroline to regular radio opens the
latest chapter in its extraordinary 53 year history", Moore told
the BBC. "Caroline was the first of many pirate stations to
broadcast from ships and abandoned wartime forts off the British
coast, opening at Easter 1964".

He added that, while technically it's only available in Suffolk
and Essex, it can be heard in other areas too, saying that "test
transmissions have reached further afield and it can be received
along much of the East Coast". 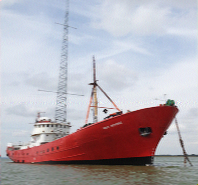 The following 14 images are "Happy New Year" in the languages of
the Shortwave Radiogram listeners who are currently sending
reception reports or reporting to our Twitter account
@SWRadiogram ...