Welcome to program 33 of Shortwave Radiogram.

North Koreans who live in border areas where mobile reception
from China is available use smuggled cell phones to talk to
family members living in China or South Korea. Authorities use
radio locators to determine the callers' locations through the
use of radio waves.

Residents are anxious about the new radio locators because they
allow authorities to immediately detect and monitor call
locations and conversations, sources said.

The Russian devices perform better than the German ones that
authorities have been using and are especially "terrorizing"
executives in government's run companies who frequently make
illegal calls to the outside world, they said.

"The State Security Department recently ordered installations of
the newest version of additional radio locators along the border
with China in Yanggang province," said source from the province,
adding that the agency has already set up 30 Russian radio
locators there since early January.

"They are known to perform better than German radio locators that
are already installed, so those who use illegal phone users are
filled with terror about them," said the source, who requested
anonymity.

As of the beginning of the New Year, the State Security
Department, North Korea's secret police agency, stepped up
crackdowns on illegal phone users in border areas, he said.

"Until now, there was no problem detecting illegal calls using
the German radio locators, so when residents made the calls, they
had to change locations every one to five minutes to avoid
detection by the German devices," the source said.

But with the new devices, which are not thrown off track by
physical movement, more executives from government and judicial
authorities have been caught making calls, he said.

"One executive from the Yanggang's Organization and Guidance
Department (OGD) got caught, and it profoundly affected the
society," the source said.

The OGD is an oversight agency of the Central Committee of the
Workers' Party of Korea, the country's ruling party. Its main
responsibility is to implement the teachings and decisions of
North Korean founder and former president Kim Il Sung,
grandfather of current leader Kim Jong Un.

"As the New Year began, the [provincial] State Security
Department installed dozens of the latest model of radio locators
in the North Hamgyong area to block the inflow of outside
information and the leakage of inside information to the
outside," said the source who declined to be named.

Though state security authorities informed residents about the
installation of the new models and said that those caught using
phones illegally would be sentenced to at least six months in a
labor camp, the warning has not deterred everyone from placing
calls to the outside, he said.

"Illegal phone calls in the border area continue, despite that
those making them could face hard labor in a camp in this
extremely cold weather," he said.

The source cautioned that authorities will not be able to detect
all illegal calls made with the Russian-made radio locators given
the high number of people who use illegal mobile phones in border
areas.

"Though the devices are the newest radio locators, it won't be
easy to uncover all illegal phone calls," he said. "If North
Korea blocks all the illegal calls that executives, traders, and
smugglers make, its market will be paralyzed."

And even if executives and traders are caught, they can always
bribe authorities to look the other way, making use of the
devices pointless, sources said.


Image: Bridges across the Yalu River between China and North
Korea ...

An American news outlet that made a rare visit to North Korea to
cover the country's Olympic team is being criticized by the Trump
administration for coverage that, in the words of one official,
depicted "the most totalitarian country on the planet … as a
cheerful winter holiday resort."

In some segments of the program, Holt was framed against a
backdrop of children sledding, skiers in brightly colored gear,
and jumbo screens displaying singers in military uniforms. Holt
said that he and his crew had undergone an extensive customs
search when entering North Korea, noting that the resort was
"certainly" an aspect of North Korea that its leaders "would like
us to see."

Criticism of the broadcast erupted online, accusing NBC of
misrepresenting a stage-managed piece of North Korean propaganda
for American viewers. Holt defended the coverage, saying, "You go
to a place like North Korea with your eyes wide open."

"We are embarrassed for NBC. A first-year journalism student
would know to highlight the severe constraints on their ability
to report on North Korea as it truly is," the official said. "It
is no small feat of the most totalitarian country on the planet
to be depicted as a cheerful winter holiday resort, but somehow
NBC has managed to do it."

The controversy over Holt's coverage comes amid a slight easing
of tension between Pyongyang and Seoul, a change which could
undercut the Trump administration's campaign of international
sanctions and "maximum pressure" on North Korea to halt its
nuclear and missile programs.

In response to last week's White House comment, an NBC
spokesperson told VOA that Holt clearly stated that the North
Korean "government escorts determined where they could go,
watching and listening to every move." In one report, Holt said,
"What you're seeing here certainly flies in the face of a country
that's undergoing crippling sanctions, and that may be part of
the reason we were invited to see this."

Holt told Adweek on Monday that the Olympic Games will be
conducted with a major news story in the background.

"The world is holding its breath on the issue of: Is this the
breakthrough? Is this the moment when they can start having a
useful dialogue?" he said. "On a geopolitical level, this may
complicate how the White House views the North Korean nuclear
threat if this sets a pattern for a stronger relationship between
the North and South."

When he's not on ham radio, Scott Tilley, VA7TIL, an amateur
astronomer, hunts spy satellites. Using an S-band radio from his
home in Roberts Creek, British Columbia, Tilley routinely scans
the skies for radio signals from classified objects orbiting
Earth, according to a recent article on Spaceweather.com. Since
starting 5 years ago, Tilley has located dozens of secret or
unlisted satellites. Earlier this month, while hunting for ZUMA —
an undisclosed US government spacecraft lost in a January 8
launch mishap — when he saw the signature of IMAGE (Imager for
Magnetopause-to-Aurora Global Exploration), a NASA spacecraft
believed to have died in December 2005. The discovery has
delighted space scientists.

"The long gone and nearly forgotten IMAGE spacecraft has come
back to life and been detected by an amateur astronomer," said
Mission Manager Richard J. Burley at NASA's Goddard Space Flight
(GSFC), which confirmed that what Tilley spotted is, indeed,
IMAGE. Amateur observer Paul Marsh, M0EYT, in the UK provided the
first independent confirmation of the IMAGE signal.

NASA said on January 29 that observations from five sites were
consistent with the RF characteristics expected of IMAGE.
"Specifically, the radio frequency showed a spike at the expected
center frequency, as well as side bands where they should be for
IMAGE," NASA said. "Oscillation of the signal was also consistent
with the last known spin rate for IMAGE."

But just to make certain beyond a shadow of a doubt, NASA will
next attempt to capture and analyze data from the signal. The
challenge to decoding the signal is primarily technical. The
types of hardware and operating systems used in the IMAGE Mission
Operations Center no longer exist, and other systems have been
updated several versions beyond what they were at the time,
requiring significant reverse-engineering."

If data decoding succeeds, NASA will try to turn on the science
payload to understand the status of the various science
instruments.

After the spacecraft went silent, an unsuccessful 2007 effort was
made to track IMAGE in the hope that a "long shadow encounter"
would drain the battery enough to cause IMAGE to reset its
control hardware. When that effort failed, the mission was
declared to have ended. Space scientists now theorize that an
even longer eclipse — or other event — did reset the system and
bring the transmitter back to life. Yet to be determined is
whether it's possible to restore IMAGE to operation and to what
degree.

Launched in 2000 on a mission to monitor space weather, IMAGE
mapped plasma patterns around Earth, keeping tabs on the planet's
magnetosphere as it responded to solar activity; on-board
ultraviolet cameras shot images of Earth's auroras. "It had
capabilities that no other spacecraft could match — before or
since," said Patricia Reiff, a member of the original IMAGE
science team at Rice University.

"If revival occurs, the mission should be able to continue as
before with no limitations," NASA's IMAGE Failure Review Board
said in its 2006 report. Reiff said scientists stopped listening
after the 2007 effort failed.

After seeing the radio signature, Tilley used a program called
STRF to identify it. STRF deduces orbital elements from the
Doppler shifts of their radio signals, and it immediately matched
what Tilley saw to IMAGE.

Reiff said UC Berkeley still has a ground station that was used
for real-time tracking and control and is scrambling to find the
old software to see it they can get the spacecraft to respond. 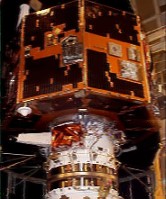 This image of the "super blue blood moon" over London on 31
January ...