This Tesla Roadster launched Tuesday by the SpaceX Falcon Heavy
rocket has a sign on its dash saying "Don't Panic" ...

Welcome to program 34 of Shortwave Radiogram.

"13 February is World Radio Day - a day to celebrate radio as a
medium; to improve international cooperation between
broadcasters; and to encourage major networks and community radio
alike to promote access to information, freedom of expression and
gender equality over the airwaves.

"UNESCO invites all radio stations and supporting organisations
to join us for World Radio Day 2018, a chance to strengthen
diversity, peace and development through sports broadcasting."

Kim: I usually don't think of "diversity, peace and development"
when I hear a football game on the local radio station. 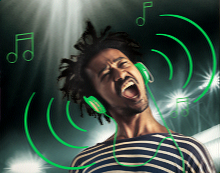 In a message on Twitter, the Pakistan Electronic Media Regulatory
Authority (PEMRA) said on February 7 that last year's ban was
still in place and urged the media to "desist from promoting" the
festivities.

In February 2017, the Islamabad High Court prohibited
celebrations in public spaces and government offices across the
country. It also ordered local media not to publicize anything
related to the day.

Petitioner Abdul Waheed said at the time that he had asked the
court to rule against promoting Valentine's Day because he
believed print and electronic media present the day as if it was
part of local culture.

In 2016, Pakistani President Mamnoon Hussain urged people in the
Muslim-majority nation not to observe the day, saying that it was
a not a Muslim tradition but a Western one.

"Valentine's Day has no connection with our culture and it should
be avoided," he said.

With reporting by AFP 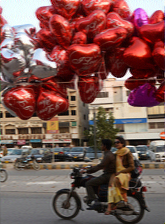 On Tuesday, Feb. 6th at 3:45 PM ET, Falcon Heavy successfully
lifted off from Launch Complex 39A at Kennedy Space Center in
Florida. Falcon Heavy is the most powerful operational rocket in
the world by a factor of two, with the ability to lift into orbit
nearly 64 metric tons (141,000 lb) -- a mass greater than a 737
jetliner loaded with passengers, crew, luggage and fuel.

Next on Shortwave Radiogram, another experiment comparing Olivia
modes.

As the bandwidth decreases, the speed of the text printout will
also decrease.

The RSID for each mode should change your software to the correct
mode. If it does not, a 30-second tone after each RSID will give
some time to change the mode manually. The Olivia 8-2000 mode
will require a custom mode change: Op Mode > Olivia > Custom >
set bandwidth to 2000 Hz and the tones to 8. The Olivia 8-1000
(1K) and 8-500 modes can be set in the main Olivia window.

World's Most Popular Dinosaur on the Move at Chicago's Field
Museum

CHICAGO - From the Black Hills of South Dakota ... to the black
mugs lining the shelves of the Field Museum gift shop ... the
world's most popular T-Rex leaves a lasting impression.

Sue is the name affectionately bestowed on the Field Museum's
star attraction, the world's largest and most complete fossilized
example of a Tyrannosaurus Rex.

She was named after the woman who discovered her, paleontologist
Sue Hendrickson. When she discovered the dinosaur emerging from
obscurity in the rock formations of South Dakota in the early
1990s, it was only the beginning of the T-rex's long journey that
included seizure by federal authorities and ultimately an auction
at Sotheby's in New York.

Chicago's Field Museum won the bidding at that auction in 1997,
spending more than $8 million to bring Sue to Chicago.

And that is where she has been for the last 18 years.


"Sue is known the world over also, because we have two casts of
Sue that travel around the world, so we take Sue to other
museums, as well as people coming here to take a look at Sue,"
Hansen told VOA during a recent press event at the Field Museum.
"Those casts of Sue have been traveling for 15 years or so, so in
the aggregate, millions of people have come to know about Sue,
and they didn't even come to Chicago."

"People that haven't seen her have a relationship to Sue through
social media, and she's a great ambassador not only for Field
Museum but natural history museums in general," said Japp
Hoogstraten, Field Museum's director of exhibitions.

Despite that popularity, Hoogstraten says Sue always seemed
dwarfed by the 21-meter-high ceiling of her home in Stanley Field
Hall. "A lot of visitors come to the Field Museum to see Sue and
feel that she is a little smaller than expected, the buildup is
too big, because this is such a huge space."

Hansen says the museum has received plenty of feedback about it
over the years.


The full text and video of the preceding VOA news story is at
https://www.voanews.com/a/t-rex-moving-to-new-exhibit-at-chicago-museum/4244205.html

Image: The skeleton of Sue, the Tyrannosaurus Rex, at the Field
Museum in Chicago ...