A Canadian National railroad locomotive plows through the snow in
New Brunswick ...


Welcome to program 35 of Shortwave Radiogram.

@experimradio is a new Twitter feed that tracks licenses in the
Experimental Radio Service, as issued by the Federal
Communications Commission in the United States.

This special category of stations is used to experiment with new
uses for radio, to demonstrate products for prospective
customers, and to develop technologies for defense and
intelligence purposes.

Unlike most other radio services such as broadcast, amateur or
mobile telephone, the Experimental Radio Service is not limited
to specific frequency allocations. These stations may be assigned
to operate anywhere in the radio spectrum, and may even use the
international high-frequency bands if they can justify their
needs to the FCC.

The FCC issues these stations callsigns which must include the
letter X. However, many such stations request exemption from any
requirement to identify themselves on the air. The FCC usually
grants such requests.

Recent examples include a satellite with LED displays that will
be visible from the ground; a medium-wave facility to transmit
power over long distances; rocket tracking and control links and
devices to detect concealed weapons.

The Twitter feed is curated by Bennett Kobb, AK4AV, a technology
journalist in Washington, D.C. and longtime supporter of VOA
Radiogram and Shortwave Radiogram. 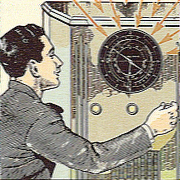 Here's a new plan for finding life on other planets

Instead of looking for water as a sign of life on distant
exoplanets, scientists should instead look at an exoplanet's
ionosphere, the thin uppermost layer of atmosphere.

For decades, astronomers have been searching these distant
exoplanets for signs of life, mostly looking for that most
essential molecule, water. But Michael Mendillo and his
colleagues have a different idea: search for an ionosphere like
our own planet's.

Find an ionosphere like Earth's, they say, packed with single
oxygen ions, and you have found life. Or, at least, life as we
know it.

On January 9, 1992, astronomers announced a momentous discovery:
two planets orbiting a pulsar 2,300 light years from our sun. The
two planets, later named Poltergeist and Draugr, were the first
confirmed "exoplanets" -- worlds outside our solar system, circling
a distant star.

Scientists now know of 3,728 (confirmed) exoplanets in 2,794
systems, each one begging the question: "Is anyone else out
there?"

"What more important question could we ask? Are we alone?" asks
Mendillo, professor of astronomy at Boston University. "I don't
know of any more fascinating question in science."

"Throughout the history of human civilization, we have never
gotten to the point -- until basically the last 15 years -- where we
could see planets around other stars. And now we're at the point
where we're coming up with ideas to discover life outside Earth,"
says John Clarke, professor of astronomy at Boston University,
and director of the Center for Space Physics. "This is a great
intellectual adventure that we're on."

Their work began when Mendillo and associate astronomy professor
Paul Withers received a grant from the National Science
Foundation to compare all planetary ionospheres in the solar
system. (All the planets have them except Mercury, which is so
close to the sun that its atmosphere is stripped off entirely.)
Simultaneously, the team was also working with NASA's MAVEN
mission, trying to understand how the molecules that made up
Mars' ionosphere had escaped that planet.

Since the early years of the Space Age, scientists have known
that planetary ionospheres differ greatly, and the research team
started to focus on why that was the case, and why Earth's was so
different. While other planets stuff their ionospheres full of
complicated charged molecules arising from carbon dioxide or
hydrogen, Earth keeps it simple, with mostly oxygen filling the
space. And it's a specific type of oxygen—single atoms with a
positive charge.

"I started thinking, how come our ionosphere is different than
the other six?" recalls Mendillo.

The team ticked off numerous possibilities for Earth's high
concentration of O+ before settling on a culprit: green plants
and algae.

"It's because we have this atomic oxygen that traces its origin
back to photosynthesis," says Mendillo. "We have atomic oxygen
ions, O+, in the ionosphere as a direct consequence of having
life on the planet. So why don't we see if we can come up with a
criterion where the ionosphere could be a biomarker, not just of
possible life but of actual life."

Most planets in our solar system have some oxygen in their lower
atmospheres, but Earth has much more, about 21 percent. This is
because so many organisms have been busy turning light, water,
and carbon dioxide into sugar and oxygen—the process called
photosynthesis—for the past 3.8 billion years.

"Destroy all the plants on Earth and our atmosphere's oxygen will
vanish away in mere thousands of years," says Withers, who notes
that all this oxygen exhaled by plants doesn't just stick around
the Earth's surface. "To most people, O2, the oxygen we breathe,
is not a very exciting molecule. To chemists, however, O2 is a
wild, exhilarating, and perilous beast. It just will not sit
still; it chemically reacts with almost any other molecule it can
find and it does so very quickly."

On Earth today, excess oxygen molecules, in the form of O2, float
upward. When the O2 gets about 150 kilometers above the Earth's
surface, ultraviolet light splits it in two. The single oxygen
atoms float higher, into the ionosphere, where more ultraviolet
light and x-rays from the sun rip electrons from their outer
shells, leaving charged oxygen zipping through the air. The
abundance of O2 near the Earth's surface—so different than the
other planets—leads to an abundance of O+ high in the sky.

This finding, says Mendillo, suggests that scientists seeking
extraterrestrial life could perhaps narrow their search area. PhD
candidate Paul Dalba, who was working on exoplanet atmospheres
with assistant professor of astronomy Philip Muirhead, joined the
team to weigh in.

The researchers report their findings in the journal Nature
Astronomy.


Image: The search for extraterrestrial life has focused mostly on
exoplanets like Kepler-186f, shown here ... 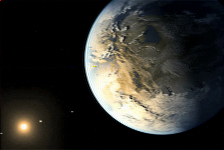 The supermassive black holes lurking at the centers of galaxies
have been known to chow down on anything unlucky enough to pass
too close, but the opportunity to see that in action rarely
occurs at the Milky Way's quiet core. Now, astronomers using the
Atacama Large Millimeter/submillimeter Array (ALMA) observatory
in Chile have imaged a very active black hole at the center of
spiral galaxy M77, which is apparently feasting on the universe's
largest donut.

The heart of M77 is what's known as an active galactic nucleus
(AGN), meaning that gas and matter is constantly being sucked
into the central black hole and giving off intense light. These
active regions in the universe could help unlock the mysteries of
how galaxies and the supermassive black holes at their cores
develop in tandem.

Apart from the occasional spectacle, our own galactic center
isn't very active, so astronomers need to look further away to
find those clues. The team, made up of researchers from the
National Observatory of Japan, SOKENDAI and Kagoshima University,
used ALMA to image M77's galactic nucleus.

The team spotted a compact gaseous structure, resembling a
gigantic donut, surrounding the black hole. The cloud stretches
some 20 light-years out from the center, and is spinning around
the black hole. The existence of these spinning torus structures
has been hypothesized for decades, but according to the
researchers, this marks the first time one has been directly
observed.

"To interpret various observational features of AGNs, astronomers
have assumed rotating donut-like structures of dusty gas around
active supermassive black holes," says Masatoshi Imanishi, lead
author on a paper describing the find. "This is called the
'unified model' of AGN. However, the dusty gaseous donut is very
tiny in appearance. With the high resolution of ALMA, now we can
directly see the structure."

The resolution of ALMA's images can't hog all the credit for the
discovery. The researchers say it was also important to focus on
specific molecular emission lines, and microwave emissions were
detected from hydrogen cyanide (HCN) molecules and formyl ions
(HCO+). Since these molecules only emit microwaves in dense gas,
it tells the team a lot about the donut's density.

But there's more to the story. The researchers say that the torus
isn't spinning perfectly in line with the black hole's gravity –
instead, there's a high degree of randomness to its motion. That
implies a violent past, which may have involved a collision with
a smaller galaxy.

The research was published in Astrophysical Journal Letters.

Image: An artist's rendition of the gigantic donut of gas that
surrounds the supermassive black hole at the center of the galaxy
M77 ...


At the 2018 Winter Olympics in PyeongChang, Perrine Lafont of
France, who won gold in the women's moguls ... 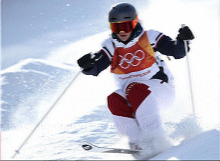 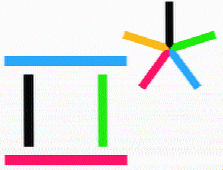 "Arirang" (아리랑; [a.ɾi.ɾaŋ]) is a Korean folk song, often considered the unofficial national anthem of Korea. There are about 3,600 variations of 60 different versions of the song, all of which include a refrain similar to, "Arirang, arirang, arariyo (아리랑, 아리랑, 아라리요)" It is estimated the song is more than 600 years old.
"Arirang" is included twice on the UNESCO Intangible Cultural Heritage list. South Korea successfully submitted the song for inclusion on the UNESCO list in 2012.  North Korea also successfully submitted the song for inclusion in 2014.  In 2015, the South Korean Cultural Heritage Administration added the song to its list of important intangible cultural assets.