At the Winter Olympics, the Dutch "own" speedskating ...

Welcome to program 36 of Shortwave Radiogram.

*** with three images
* with image


Broadcasting Board of Governors budget request includes plans
for shortwave

The Broadcasting Board of Governors, consisting of VOA, RFE/RL,
Radio Free Asia, Radio/TV Martí, Radio Sawa and Alhurra, is
slated for a $24 million budget reduction in fiscal year (FY)
2019.

Of course, Congress will review and probably will modify the
President's budget request for BBG and other agencies.

Here are excerpts from the budget request pertaining to
shortwave:

"TSI [Technology, Services and Innovation, i.e. BBG engineering]
continues to move the BBG from traditional broadcasting
technologies, such as cross-border radio transmissions shortwave
(SW) and medium wave (MW serving regions where these platforms
are no longer popular, to other delivery systems that are rapidly
growing in effectiveness and are less expensive to operate (e.g.,
FM radio, DTH satellite, internet streaming, mobile, and social
media). ...

"As part of its multi-year global network realignment, TSI
will continue to focus efforts on upgrading its shortwave
capacity at the Kuwait Transmitting Station, even as use of SW
decreases. With superior strategic location and extremely low
operating costs, this station will be able to serve the
overwhelming majority of legacy SW audiences in the most
cost-effective manner possible, at a fraction of the cost of
other BBG operated site or expensive leased capacity. ...

"Over the years, the use of shortwave (SW) radio has declined
globally. TSI has responded by consolidating broadcasts to more
cost-effective transmitting stations and reducing or even
eliminating SW where it is no longer relevant. In markets where
SW does still retain a sizable, valuable audience, TSI is
committed to making SW service available in the most
cost-effective way possible. To meet this need, TSI has been
upgrading the Kuwait Transmitting Station (KTS), which enjoys a
superior strategic location and extremely low operating costs. In
FY 2017 TSI continued to expand that facility, and in FY 2018 TSI
will procure and install new antennas. In FY 2019, TSI is
committed to investing in the KTS expansion further, utilizing
whatever resources may be available, in order to realize
longer-term savings. Ultimately, the BBG's goal is to be able to
serve most legacy SW audiences from this one site, at a fraction
of the cost of all the other transmitting stations, so that
other, more expensive sites may be scaled back or closed.

"In FY 2017, TSI completed the closure of the station in Sri
Lanka and in FY 2018 will close the BBG facility in Poro,
Philippines. TSI's systematic and thorough review of all
transmission leases will continue in FY 2019, identifying further
opportunities for savings. In the years between 2010 and 2016,
total costs associated with Cross Border Radio (SW and MW ) have
declined by over $25 million (34.5%), and we expect this decrease
to continue as we respond to market needs and as the
Administration and Congress authorize us to shutter less
effective legacy facilities …

"[I]n China, including Tibet, TSI will continue to provide
satellite TV and radio service via Telstar 18, the most popular
satellite in China, for only a fraction of the cost of the BBG's
legacy shortwave and medium wave transmissions to the region.
This allows TSI to leverage the widespread use of satellite
receiver dishes across the country and provide accessible
programming where local cable and internet access is restricted.
In FY 2018, TSI will procure additional satellite capacity on
this satellite, allowing BBG to simultaneously distribute HD and
SD TV programming and capitalize on the migration of Chinese
audiences to HDTV, while not stranding legacy SD users. …

"Radio remains a very popular platform in many BBG markets,
particularly Africa. BBG global weekly radio audiences increased
by a stunning 28 million in 2016 alone and by 35 million since
2012. While shortwave continues to be a relevant means of
delivery in several African markets, in most countries rapid
growth and competition in the media market have shifted radio
habits almost entirely towards FM. The BBG provides 24/7 FM radio
programming in over 30 markets across the continent. … 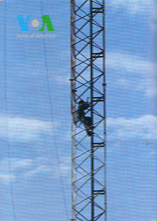 But good news for Kuwait and Greenville stations

"As part of its multi-year global network realignment, TSI will
continue to focus efforts on upgrading its shortwave capacity at
the Kuwait Transmitting Station, even as use of SW decreases.
With superior strategic location and extremely low operating
costs, this station will be able to serve the overwhelming
majority of legacy SW audiences in the most cost-effective manner
possible, at a fraction of the cost of other BBG operated site or
expensive leased capacity. …

"The BCI [broadcasting capital improvement] funds in FY 2018 (and
base funds in FY 2019) will be used to continue the planned
reconfiguration and expansion of the shortwave broadcast
infrastructure at the Kuwait Transmitting Station. This will
allow BBG to enhance transmission to multiple regions, including
Africa, and achieve cost savings for shortwave broadcasts.
Because of the very low cost of electrical power in Kuwait, the
Kuwait Transmitting Station is the least expensive IBB station to
operate. This project will allow the agency to shift
mission-critical but higher cost transmissions from other
stations in the IBB network to Kuwait.

"TSI will install and deploy three newer SW transmitters at the
Greenville, NC Edward R. Murrow transmitting station enabling a
doubling of frequencies servicing Cuba and making it extremely
difficult for the Cuban government to effectively block Radio
Marti signals into the Island. …

"To serve audiences in less developed areas of the world, the BBG
must continue to broadcast via traditional technologies, such as
shortwave, and maintain capability and improve efficiency on
these platforms by replacing antiquated equipment. But to stay
relevant in competitive news markets and serve current and future
audiences, the BBG must continue to invest in new cutting-edge
technology. In areas where ownership and usage of shortwave radio
has declined significantly, the Agency has evolved away from
broadcasting in that medium. The BBG has closed transmission
stations, repurposed equipment and invested these savings in
platforms that the audience has shifted to, primarily television
and digital media." 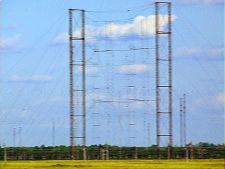 With an astronomer's toolkit and an artist's eye, Zoltan Levay
has transformed raw data from the Hubble Space Telescope into
stunning space vistas for almost a quarter century. He's now
preparing for a new challenge: Working with light not visible to
human eyes.

Levay's next charge is the James Webb Space Telescope, set to
launch in 2019. Unlike Hubble, which mostly views the universe in
visible light, Webb will observe in infrared, with wavelengths
too long for human eyes to detect.

"We're translating this invisible light into the visible range,
so we can visualize it," Levay says.

The switch is worth making because the telescope will see further
back in time than Hubble - possibly to the universe's first stars
and galaxies, whose light has been stretched by cosmic expansion.

But it also makes the most common question Levay gets - "What
does it really look like?" - tougher to answer.

"The most important thing for us is we don't want to make things
up," says Joseph DePasquale, a science visualizer who in March
2017 joined Levay at the Space Telescope Science Institute in
Baltimore. Both have academic training in astronomy and informal
training in art (Levay in photography, DePasquale in painting).

The main challenge will be color, DePasquale says. The artists
will employ a "chromatic ordering" strategy used for other
observatories, including Hubble. Each infrared wavelength in the
range captured by the telescope will be assigned a color. The
longest will be red, the shortest blue and the rest in between.

But the pair worry that Webb's images might look too fake. Hubble
captures something close to real colors, but in similarly
processed images from the infrared Spitzer Space Telescope, all
stars appear blue (because stars emit more light at visible
wavelengths and in the near-infrared). Spitzer images also can be
dominated by gas in mid-wavelength greens.

"There's nothing inherently wrong with that," DePasquale says,
but he's uncertain about the aesthetics. And so, the team hasn't
chosen the palette for James Webb's images yet.

Another challenge will be visualizing spectra, rainbows of
split-up light that can reveal chemical composition. Compared
with Hubble's, much more of Webb's data will come in spectral
form, Levay says. But spectra are often presented as simple bands
of color. How will the team bring spectra to life?

The pair will also decide whether to leave in visual side effects
of how the telescope works. When Hubble's cameras create cross
hairs coming out of bright stars, for instance, Levay and
DePasquale let them be. "That's an artifact, but it's visually
pleasing, so it stays," DePasquale says. The honeycomb pattern of
Webb's mirrors might likewise imprint itself on the stars in the
images, like an artist's signature.

It's hard to know if Webb's images will become as iconic as
Hubble's - or more so. "Hubble grew up pretty much at the same
time as the Internet and ultimately was one of the first
observatories to enjoy ‘mass-market' distribution of results,"
Levay says. By contrast, the Webb telescope is already on
Twitter, and it hasn't even launched yet. It has the potential to
reach a huge audience from the very beginning.


Image: Visualizations of images from the upcoming James Webb
Space Telescope could look akin to these from the Spitzer Space
Telescope ...