This giant sign advertising the Potomac Mills shopping mall
south of Washington DC was bent by the high winds on 2 March,
closing lanes on the adjacent interstate highway until it could
be dismantled ...

Welcome to program 38 of Shortwave Radiogram.

Clocks in Europe are running late because of the Kosovo conflict

Clock radios and timers on microwaves and stoves have gotten out
of sync in Europe in recent weeks. The reason: Coordination
problems between the power grid operators of Kosovo and Serbia.

Since mid January power companies in Kosovo and Serbia have
failed to mutually balance their electricity grids in the case of
irregularities. According to the grid codes of the European
Network of Transmission System Operators for Electricity
(ENTSO-E), they are obliged to maintain a mean frequency of 50
hertz (oscillations per second) and help each other out if
necessary.

But in reality, the mean frequency was lower most of this year.
The reason: The operators did not talk to each other. This
resulted in power deficits of the larger regional grid control
area Serbia, Macedonia, Montenegro, also known as the "SSM
Block".

All in all the, frequency deviations amount to the equivalent of
113 Gigawatt hours (GWh) in lost energy. That is roughly the
daily production of a larger scale brown coal power plant.

There are 36 member states in ENTSO-E with interconnected power
grids, ranging from Spain to Norway and from Turkey to the
British Isles. The recent reductions of the frequencies have
affected 25 of the member-states.

This resulted in a situation in which clocks which are dependent
on the power grid, such as clock radios or clocks built into home
appliances like stoves or stereo systems, have lost time. Since
the beginning of the problems in January it has amounted to
roughly six minutes.

Better to lose six minutes than suffer a blackout

To maintain the required frequency of 50 Hertz, the electricity
grid uses a primary control. This is a technical mechanism which
makes sure that power deviations will be quickly balanced by
drawing additional energy from batteries or other sources in
neighboring power grids - until additional power plants have been
activated and reached their full power levels.

If balancing doesn't work, a five-step plan takes effect: If the
frequency drops below 49.8 hertz, the first step takes effect,
and additional primary regulation sources must be activated.

If that isn't enough to stabilize the network, operators may have
to disconnect selected consumers or parts of the grid. In the
fifth step, when the frequency drops below 47.5 hertz, a total
blackout can occur.

"I don't know of any other case where a partner has not met the
rules over a longer period of time," says Christian Rehtanz, a
professor at the Institute for Energy Systems at the Technical
University of Dortmund. "The situation is new and needs to be
fixed."

Rehtanz says he could imagine separate areas of the grid having
to be disconnected - but he also warns of the consequences.

"The dilemma is that we should not risk triggering a blackout in
any region. On the other hand, the political actions of some
should not endanger the secure operation of the whole system."


A technical, but also political, problem

ENTSO-E has called on its member states to solve the problem with
urgency, both in a technical and a political sense. Some states
should not be put into a position where they have to provide
"primary regulation energy" (the energy used to balance short
term irregularities in the system) over a longer period of time
in order to compensate for regional deficits.

But, there is no reason for panic, either. Frequency deviations
of up to one percent (49.5 to 50.5 hertz) for up to 44 hours per
year are normal, says Jutta Jansen. She's a professor of electric
power supply with renewable energies at the Technical University
of Darmstadt. "This shows that the frequent but minimal
deviations we've seen recently do not appear critical for
operating the power grid."

And the fact that the clocks are running late is "an unpleasant,
but not really dangerous, situation," she says. In the long run,
the lost time could actually be compensated for by raising the
frequency again slightly above 50 hertz.

So maybe it's better to wait before resetting your clock -
otherwise, you might have to set it back again later.

Scientists studying data from NASA's Juno spacecraft have
published a trove of papers in Nature this week, making a number
of intriguing and surprising findings about the atmosphere of the
largest planet in our Solar System. The papers are summarized and
linked in this NASA news release.

Some of the most striking discoveries come from visible and
infrared observations made by Juno during its first five science
passes in its elongated orbit around Jupiter. (The spacecraft
entered Jupiter's orbit on July 4, 2016. It will make its 11th
pass on April 1.) In these initial passes, scientists found
clusters of strange and long-lasting cyclones orbiting the north
and south poles of Jupiter.

At the north pole, eight persistent, polygon-shaped cyclones were
observed around a single polar cyclone. In the south, five storms
circled a single cyclone. Scientists confirmed the circulation of
these storms through time-lapse imagery. The northern storms,
measuring 4,000 to 4,600km in diameter, are smaller than the
southern hemisphere storms, which are 5,600 to 7,000km in
diameter.

Normally, scientists would expect these cyclones to migrate
toward the pole due to the Coriolis beta effect, in which
vortices in a fluid would naturally drift toward the pole.
However, on Jupiter, these vortices have persisted and not
drifted substantially or merged during Juno's initial
observations. This has surprised scientists, because the polar
cyclones are so densely packed, with the spiral arms of each one
coming into contact with its neighbors.

They should be pushing and pulling at one another and merging as
a result. "The question is, why do they not merge?" said Alberto
Adriani, Juno co-investigator from the Institute for Space
Astrophysics and Planetology, Rome, and lead author of the paper.
"We know with Cassini data that Saturn has a single cyclonic
vortex at each pole. We are beginning to realize that not all gas
giants are created equal."

As the researchers note, "The configuration of the cyclones is
without precedent on other planets." NASA scientists are now
trying to model the atmospheric conditions under which such
features might form and persist in the Jovian atmosphere. More
data from future Juno passes by Jupiter will certainly help.

For the last few years, Goodyear has rolled into the Geneva Motor
Show with new tire designs that could be described as intriguing
concepts at best and crazy, outlandish ideas at worst. Either
way, they do provoke thought around the future of transport and
this year's rendition is no different, hiding living moss inside
the sidewall to cleanse the surrounding air as the car rolls down
the road.

Goodyear's earlier concepts have included tires that convert heat
and motion into an electrical current, a spherical tire that
enables cars to drive sideways, and another spherical version
that incorporates artificial intelligence.

The newly announced Oxygene won't spin sideways, but it will
harvest energy through photosynthesis. It inhales C02 from the
air and moisture from the road, feeding a living moss in its
sidewall and releasing oxygen into the air. The way Goodyear sees
it, in a city the size of Paris with 2.5 million vehicles on the
road, a society-wide adoption of the Oxygene tire would create
3,000 tons of oxygen and soak up more than 4,000 tons of C02 a
year.

What's more, the tire would also capture energy generated during
photosynthesis and use it to power electronics inside it, such as
onboard sensors, a customizable safety light, and an artificial
intelligence processing unit. It would also use Li-Fi to hook up
with the Internet of Things and talk to other cars and road
infrastructure. The tread would be 3D-printed using rubber powder
from recycled tires.

This thing is never going to make it onto the road, at least not
in its current form – scientists have been trying to draw
meaningful amounts of energy from artificial photosynthesis for
decades, for example – but take it for what it is, a thought
experiment in how we might move people around cities in cleaner,
more environmentally ways, and it is certainly an interesting
idea. 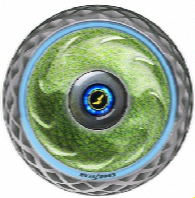 
Next on Shortwave Radiogram, our MFSK image enhancement
experiment.

The experiment was designed by Mark Braunstein, WA4KFZ.

Complete details are available at
http://swradiogram.net/post/171634138892/mfsk-image-enhancement-experiment

Basically, the experiment involved transmitting an MFSK32 image
at normal speed, then at half speed.

Please record the image transmitted at half speed, then play it
back at full speed.

If you use the Audacity software, use Effect > Change Speed >
Percent Change: 100

After you have decoded both the images transmitted at normal
speed and at half speed converted to normal speed, compare them
for quality.

Please report your results, attaching the images if possible, to
radiogram@verizon.net

Next, the image transmitted at normal speed ...

Now, the image transmitted at half speed ...