This is Tinsel, a "comfort" guinea pig for the students of Goshen
High School in Indiana ...

Welcome to program 41 of Shortwave Radiogram.


From the South Bend (Indiana) Tribune:

Dyngus Day, the Polish holiday that falls one day after Easter,
is no exception. Devotees flock to bars and social clubs for a
mixture of traditional Polish foods, alcohol and dancing.
Politicians descend on places such as the West Side Democratic &
Civic Club in South Bend, eager to make a speech and press the
flesh.

All this is done over the din created by big crowds and music,
sometimes live, to which people polka. South Bend does it like
few other cities.

"The day also is big in Buffalo, N.Y., and in some other
communities," longtime Tribune columnist Jack Colwell wrote in
2007. "Nowhere is it celebrated just the way it is in South
Bend."

Beer is often the go-to drink for those inclined to celebrate
with booze in hand.

Domestic offerings such as Budweiser, Bud Light, Miller Lite and
Coors Light take center stage. They're easy drinking and can be
consumed in volume. Drewrys, a beer brewed locally into the early
1970s then briefly brought back to life a few years ago, has been
popular in the past.

Yet there is another, lesser-known alcohol that powers Dyngus Day
celebrations.

In some bars, it might collect dust. But to the establishments
that brim with patrons on Dyngus Day and cater to the Polish
community in general, there is no mistaking its importance.

Everybody within that sphere knows about jezynowka, a
blackberry-flavored brandy.

"It was for any event," Stella's Crumstown Tavern owner Marcia
Rathwick says. "You always had a bottle at the house. It's best
cold. I believe so. It was always in the fridge."

Jezynowka - often shortened to just "jez" and pronounced "yazh" -
is the Dyngus Day spirit of choice, without question. Proof is in
the consumption.

Rathwick says Stella's goes through about a bottle each week, on
average. She'll have six or so on hand for Dyngus Day.

The nearby Crumstown Conservation Club gears up in a serious way.
Dyngus Day celebrations at the club begin about 7 a.m. with folks
lined up outside the door in hopes of scoring a prime spot
inside. Shortly thereafter, the shots of jezynowka start flowing.

Annette Wise, bar manager and secretary on the Conservation Club
board, says she ordered four cases of the liquor for Dyngus Day.
She expects to go through every bit of it by the time the club
closes up for the day.

"We carry it all year round down here," Wise says. "Down here,
it's used for any type of celebration - birthdays, weddings, they
use jez. Any time they celebrate, it's a shot of jez, especially
in the Polish community."

The unfamiliar might be wondering: What, exactly, does it taste
like? Let the veterans be your guide.

"You ever had Robitussin?" Julie Brown, a longtime bartender at
Stella's whose father always kept a bottle around, quips.

"It tastes like Vicks Formula 44 if you ask me," Wise says.

Cough syrup comparisons, admittedly, aren't the most flattering.
The brandy is fruity and smooth. It does, in fact, coat the
throat like cough syrup. Most would admit it's an acquired taste.
That doesn't keep jezynowka from having its fans.

"I like the flavor," Rathwick says. "A lot of people are like,
‘How can you drink that stuff?' I don't think it's that bad. I
like it. But it's not something you sit around and drink every
day. You're not like, ‘Hey, I'm going to go to the bar for some
jez. Want to come?'"

One more thing about jezynowka: It's almost exclusively taken as
a shot.

Rathwick says she's seen it mixed in the past with Southern
Comfort to make a concoction called "Wyoming wobbling water." In
recent years, some customers have mixed it with Red Bull, the
energy drink, to create a jezynowka bomb. Hunters might sip it
when they're out on a cold morning.

But for the most part, it's taken straight and quick, never
mixed. So if you're inclined to give it a try this Dyngus Day,
make sure to do it as tradition dictates.

"I've been a bartender for 32 years," Brown says, "and I've never
had anyone order it in a drink. It's always been in a shot." 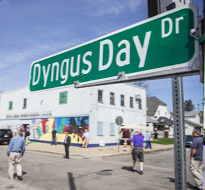 But their feast-day is based on the consumption of alcohol, that should be "alternative facts".

OK, funny story.
For some people, however, the whole year is "April 1st", which is sadder.

SYDNEY - Australian scientists say a powerful ground-based laser
targeting space junk will be ready for use next year. They say
there are hundreds of thousands of pieces of debris circling the
Earth that have the potential to damage or destroy satellites.

Reducing the amount of space junk in orbit has been the focus of
a meeting of scientists this week in Canberra organized by
Australia's Space Environment Research Center.

The meeting has heard that a laser using energy from light
radiation to move discarded objects in space could be ready for
use within a year. Researchers in Australia believe the
technology would be able to change the path of orbital junk to
prevent collisions with satellites. The aim is to eventually
build more powerful laser beams that could push debris into the
Earth's atmosphere, where it would burn up.

Professor Craig Smith, head of EOS Space Systems, the Australian
company that is developing the junk-busting devices, explained
how it would work.

"We track objects and predict collisions to high accuracy and if
we think a space debris object is going to have a collision with
another space debris object then we can use our laser to change
its orbits rather than crashing into a satellite or another space
debris object causing more space debris. Again as we ramp up the
power to bigger and bigger lasers then, yes, you can actually
start moving it enough to what we call de-orbit the satellite by
reducing its velocity enough that it starts to change orbit
height and eventually hits the atmosphere and the atmosphere
takes over and drags it," Smith said.

The system, which would operate through a telescope near the
Australian capital, Canberra, is expected to be finished early
next year. It is estimated there are 7,500 tons of trash in
space. This includes an estimated half-a-million marble-sized
pieces of junk, while other items, such as discarded rockets and
disused parts of space crafts, are much larger.

In 2012, the eight-ton Envisat Earth Observation satellite
unexpectedly shut-down in orbit, where it remains. The size of a
school bus, the satellite is one of the largest pieces of 'junk'
in orbit and could become a catastrophic hazard if struck by
other space debris and broken into fragments.

But space debris does not have to be big to cause damage. A
floating fleck of paint is thought to have cracked a window on
the International Space Station.

In Europe, large nets and harpoons are being developed to catch
debris encircling our planet. 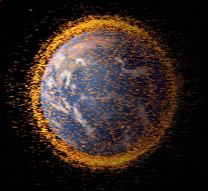 On Shortwave Radiogram, time for one more image.

First the image, then the caption ... 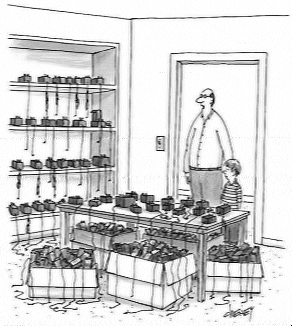 "One day, son, all of these perfectly good A.C. adapters, which
have long outlived the products they were originally designed
for, will be yours."

This is Shortwave Radiogram in MFSK32, where your decoded MFSK32
text should still be in the receive pane ...