Yes, the tulips are in bloom in the Netherlands, home of The
Mighty KBC ...


Welcome to program 46 of Shortwave Radiogram.

ANNAPOLIS/CAMBRIDGE/EASTON, MD - It's another busy day for Tommy
Price, who has a list of around two dozen restaurants and other
seafood businesses to visit, to pick up discarded oyster shells.

Fast and energetic, he moves barrels of smelly shells from
restaurants' back storage areas to his truck. "We do seven
pickups a week, plus events on weekends. I'd say we're getting
somewhere between 500 and even 800 bushels a week," he says.

That's the beginning of a recycling process, a journey for the
oyster shell to return to the water.

Price is the operation manager with Shell Recycling Alliance, a
program run by the Oyster Recovery Partnership.

Last year, the program collected 33,400 bushels of oyster shells
from restaurants all around the Chesapeake Bay area. Every half
shell collected becomes a new home for around 10 baby oysters.

Oysters have been a popular item on the menu of Mike's Crab House
since 1958.

The famous seafood restaurant, in Riva, Maryland, is one of more
than 330 restaurants in Maryland, Virginia and Washington D.C.
that now recycle their oyster shells.

Tony Piera says he and Mike's other owners joined the program
four years ago.

Mike's Crab House is one of the top ten contributors to the
program this year, with more 822 bushels of recycled oyster
shells in 2017.

"I think I'm getting more customers here because they know we
recycle here," Piera says. "They know it's good for the
environment, the Chesapeake Bay."

The Oyster Recovery Partnership began in 2010 with 22
restaurants. Spokeswoman Karis King says the program has been
well received and is expanding.

"We continue to grow and expand from us basically knocking on
doors, trying to get people involved," she adds. "It's turned out
into getting requests every single day, 'How do we become part of
this program?' 'I'm really excited about the program.' 'I want to
do my part.' 'I want to be sustainable.'"

The recycling program offers incentives to encourage more
restaurants to join. "In Maryland, tax credits that restaurants
can claim based on how many bushels they recycle. We also provide
them with support, restaurant training to talk to the servers
about what the program is and why it's important."

Done with his day's rounds, Tony Price heads to a facility where
the first phase of the process - cleaning the shells - begins.

"The shell is taken down here, it's aged, it sits for about a
year. It dries out, sun, wind, rain," he explains. "(It) kind of
decomposes a little all the tissue that's left. Behind me is the
shell washer. There are jets of a high pressure water from a
pressure water system tumbles the shells, just give it a nice
cleaning. So, it comes out brilliant white as opposed to the
stuff on the other side is the raw shell. It's a little bit
grayer."

Then, the shells go to the University of Maryland's Center for
Environmental Science Horn Point Oyster Hatchery for further
processing.

Hatchery manager, Stephanie Alexander, says her team gets tiny
baby oysters, called spat, ready to be attached to the clean
oyster shells. "We get the adult oysters, we spawn them and
create the babies. Then, we grow those baby oysters for two to
three weeks. Then they mature and we attach them to the shell to
become spat on shell."

Now firmly attached to the recycled natural shells, the spat are
put back in the Chesapeake Bay. Here, they will grow and
flourish, increasing the oyster population.

Alexander says new generations of oysters are crucially important
for the health of the bay. They filter the water.

"That kind of makes them the bay's kidneys," she explains. "The
cleaner water you have, the more sunlight can penetrate, the more
grasses you end up having, which results in nursery area for fish
and crabs when they are small and juvenile so they don't get
eaten. They also are spawning and reproducing, adding to the
population. They (oyster shells) create habitat for many, many
creatures. They are kind of the coral reefs of the bay."

The success of the Recycling Shell Alliance program encourages
more restaurants to join. That's good for the bay and for people
who love to eat oysters.

Scotland's government has set up a bottom limit for pricing
alcohol content. First Minister Nicola Sturgeon said the
move would "save lives."

Scotland introduced a minimum price per unit of pure alcohol on
Tuesday. The move is aimed to curb the sale of cheap and strong
drinks in a society burdened by abuse of alcohol.

Scots consume nearly 20 percent more alcohol on average than
residents of England or Wales, according to government data.
Officials say 24 people die from alcohol-related causes every
week, and that 60 percent of young offenders in Scottish prisons
were drunk at the time of the offense.

Other parts of the UK were also mulling minimum pricing for
alcohol, Sturgeon told the AFP news agency.

"I think we will see countries across Europe and further afield
look to replicate what has been done here in Scotland," she
added.

Pubs safe from the price hike?

Under the new policy, alcohol sellers will be expected to charge
at least half a British pound (€0.57/$0.68) for every unit of
pure alcohol. In the UK, a unit is set at 10 ml or 8 grams of
alcoholic content. This roughly works out to nearly 3 units per
pint of beer or two per standard glass of wine, although these
figures vary with the brands and makes of alcoholic beverages.

"Almost all drinks bought in the pub are already sold well above
any likely minimum price, so they wouldn't be affected," the
government said on their website.

The Scottish parliament first adopted the measure in 2012, but it
was challenged in court by the Scotch Whisky Association and
other representatives of the industry. That launched a yearslong
legal battle that reached the European Court of Justice in 2015.
Last year, Britain's Supreme Court sided with the Scottish
government.

"The premium whiskies that the industry in Scotland is so
renowned for are not the alcohol products that are going to be
most affected by minimum pricing," she told the AFP news agency.


Image: One brand of white cider in Scotland ...

Kim: I found a review of Diamond White at https://bit.ly/2FFZtfs
...

Kim: Sounds like a good candidate for official drink of Shortwave
Radiogram. I don't think we can get it here in the USA, which is
probably just as well.

For six-and-a-half decades, Germany's international public
broadcaster has been providing the world with news and
information. Deutsche Welle's offerings are more diverse and
widely used than ever before.

"Dear listeners in faraway countries" - with these words from
German President Theodor Heuss, Deutsche Welle (DW) began
broadcasting on May 3, 1953. Germany's foreign public radio
station was charged with providing audiences abroad with a
political, economic, and cultural picture of the country.

DW broadcast via shortwave and initially only in German. The
first foreign languages were added in 1954. In 1992, DW expanded
into television and, shortly thereafter, the internet.

"Of course the days of just shortwave were easier," says Deutsche
Welle Director General Peter Limbourg. "But thanks to the
internet, social media, and our network of partners, we now have
the chance to reach significantly more people than we used to. We
offer a mix of news, background, and think pieces, presented in a
modern fashion and oriented around the interests of our diverse
and often very young target audiences."

Limbourg has been DW's director general for the past four and a
half years.

The audience has also changed. Today more and more people get
their news via smartphones. Listeners have become followers.

Since 1965, the Deutsche Welle Academy has trained thousands
journalists from around the world. When they go abroad, German
government ministers often encounter high-ranking partners who
tell them how they've been influenced by Deutsche Welle.

Sixty-five years after Deutsche Welle's founding, the global
political situation is similar in a number of respects to 1953.
Fears of a new Cold War are growing, and freedom of speech and
the press is threatened in many parts of the world.

"The times have become rougher, which means more work for DW,"
Limbourg says. "We need to provide information, build bridges and
communicate values. Whether you call it a new Cold War or a
multipolar world order, the challenges that come from propaganda,
fake news, migration, climate change and terrorism are
increasing."

DW is partly blocked in China and Iran - a worrisome development,
but also one that shows, in Limbourg's words, "that our work is
very relevant."

Today, the rivalry of political systems and ideologies is
mirrored in competition between international media.

Deutsche Welle employs some 3,400 people from 60 countries in
Bonn and Berlin, making it Germany's most multicultural
broadcaster. And the number of DW correspondents in Africa, Asia
and Latin America is growing.

"This diversity is a treasure trove for Deutsche Welle and one of
our strengths," says Limbourg. "We learn from one another, and
the interactions of cultures, religions and traditions constantly
yield innovations and improvements, all based on the democratic
values of the German constitution. It's a great joy for me to
work with so many different, inspiring colleagues."

And what does the rest of the world think? Sandra Petersmann is a
veteran DW journalist with extensive experience in crisis
regions. In the year 2000, as a young journalist, she accompanied
doctors working for an aid organization on a trip through Eritrea
on the Horn of Africa.

"One afternoon we passed through a small village where a couple
of dozen people were gathered around a tiny battery-operated
radio under a majestic Kosso tree," Petersmann says. "I
recognized the station ID as Deutsche Welle's. I didn't
understand a word my colleagues from the Amharic-language
department were saying, but when I introduced myself to the
people under the tree as a DW journalist, I was immediately
invited to a traditional coffee and incense ceremony."

Petersmann adds that she experienced similar scenes in
Afghanistan, where in the villages "people don't have TV, yet are
still hungry for information."

Known the world over

Like many colleagues, Petersmann regrets that DW no longer
produces radio programming in numerous languages. But the times
have changed. Podcasts and social media are the flavor of the
day.

When a Deutsche Welle microphone appears in a refugee camp in
Jordan or Turkey, people are eager to tell their stories. And
when the best-known face on DW's Arabic service, Jaafar
Abdul-Karim, is on the go in Beirut, Amman or Cairo, young people
flock to him. His "Shabab Talk" show takes on subjects that many
state-run television broadcasters in the Arab world shun, and he
reaches an audience of millions of young people.

DW online articles in Urdu, Pashtu or Chinese attract tens of
thousands of hits when the subject matter is freedom of speech,
women's rights, corruption or better educational opportunities.
As do expert background reports about the policies of the German
government under Chancellor Angela Merkel in the age of Donald
Trump and Vladimir Putin.

Conversely, Germans appreciate how the country profits from
Deutsche Welle, especially in times of global instability. The
existence of the foreign public broadcaster is guaranteed by the
special "Deutsche Welle Law," and Germany's parliament, the
Bundestag, keeps abreast of developments at the country's global
media outlet.

In international polls, 96 percent of DW users say that the
broadcaster is trustworthy. That's more than 150 million people a
week - a number that is growing.

Some severe weather this past week in the United States,
including this tornado near Culver, Kansas, on 1 May.
https://bit.ly/2ri1sl2 ... 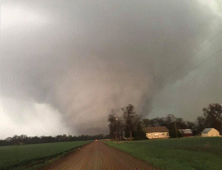 THANK YOU FOR DECODING THE MODES ON SHORTWAVE RADIOGRAM..