Welcome to program 47 of Shortwave Radiogram.

Here is the lineup for today's program, in modes as noted.

There have been reports in the media that a couple of
supervolcanoes, such as Yellowstone in the US and Taupo in New
Zealand, that are saying are on the verge of eruption.

The United State Geological Survey (USGS) says, however, that
such an eruption at Yellowstone is very unlikely in the next
thousand or even 10,000 years. Scientists say they have also
found no indication of an imminent smaller eruption of lava.

New Zealand’s GeoNet website that provides geological hazard
information for New Zealand indicates that the alert level for a
Taupo eruption is currently at 0 and that there is no volcanic
unrest.

A new study led by researchers at the University of Illinois at
Urbana-Champaign provides some comfort, suggesting that
geological signs indicating a catastrophic eruption would be
clear far in advance.

While there have been reports of seismic or geyser activity near
a couple of supervolcanoes, the study, published in journal
Geophysical Letters suggests that signs of disastrous eruption
will be much greater and longer-lasting than anything that has
been documented so far.


This is Shortwave Radiogram in MFSK16


MFSK16 is a slow mode: 55 English words per minute. It is,
however, very effective in poor reception conditions. And because
it is a narrow mode, it can be moved to an audio frequency where
interference is less intense.

Next on Shortwave Radiogram, some examples of non-Latin text.

SYDNEY — Australia's bid to join the rapidly growing space
industry will receive a multimillion-dollar boost. Most developed
countries, including New Zealand, have agencies dedicated to
promoting industries in space. Australia has many space startups,
some of which have struck deals with NASA and other international
agencies.

Australia is entering the race into space late compared to other
developed nations. The National Aeronautics Space Administration
(NASA), the U.S. civilian space program, was set up in 1958,
while the Canadian Space Agency was formed in 1989. The United
Kingdom Space Agency aims to capture 10 percent of the global
space market by 2030.

Australia currently does not have rockets that can transport
satellites into orbit, nor does it have any launch capabilities.
However, the rapid advance of technology and reusable rockets
have drastically cut the cost of doing business in space.

A company in Australia's Northern Territory is working with
Indigenous groups to build a launch site. 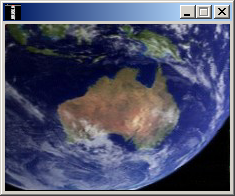 French President Emmanuel Macron arrived in New Caledonia on
3 May for a visit that precedes a referendum on independence
for the Pacific territory. His programme aroused criticism
from both separatists and French loyalists.

Arriving after a three-day trip to Australia, Macron declined to
take a position on the independence vote, although during last
year's presidential election campaign he expressed a preference
for the territory remaining part of France .

The visit was an opportunity to "pay tribute to some important
occasions in our common history, occasions which may have
sometimes been painful", he said.

Among those painful occasions was the storming of a cave on the
island of Ouvéa that saw 21 people killed.

Macron took part in a ceremony marking the 30th anniversary
of the event, in which separatists of the Kanak and Socialist
National Liberation Front (FLNKS) killed four gendarmes and took
27 others hostage.

When French commandos stormed the cave 19 separatists and two
soldiers were killed.

A year later separatist leaders Jean-Marie Tjibaou and Yeiwéné
Yeiwéné were murdered by fellow separatist Djubella Wea at the
monument to the Kanaks who were killed.

Some of their relatives and local residents have threatened to
disrupt the ceremony, which takes place at a monument
commemorating the dead gendarmes, although other Kanak tribes
have called on the population to take part in it.

The fifth of May was the anniversary of the 1998 Nouméa accords,
which ended the violence and started a process of decolonisation
and increasing autonomy that will culminate in the referendum in
November.

Macron marked the occasion by presenting the local government
with the original of France's declaration of its colonisation of
the territory in 1853.

Apart from a desire to counter British and Dutch presence in the
Pacific, France's main reasons for taking over the territory was
to build a penal colony, which later served to imprison left-wing
rebels from the 1871 Paris commune and Algerians who fought
France's colonisation of their country.

The French president, the seventh to visit New Caledonia but the
first to go to Ouvéa, made what was billed as a "major
speech" at a theatre built on the site of the penal colony.

Loyalists to march for flag

Of the archipelago's 270,000 inhabitants, about 40 percent are
indigenous Kanaks, 27 percent of European origin, the rest
defining themselves as mixed race or of other origin.

An opinion poll has shown a big majority likely to reject
independence in November's vote and some of the loyalist camp has
criticised Macron's visit as concentrating too much on Kanak
identity.

They organised a march in honour of the French tricolore
flag on 4 May, supported by three organisations, including the
far-right National Front. Local representatives of the mainstream
right Republicans also joined the demonstration.

"The head of state cannot just mediate and guarantee dialogue,"
Republicans Senator Pierre Frogier told a rally for the No vote
in the referendum on Wednesday. "He is also the guarantor of
French solidarity." 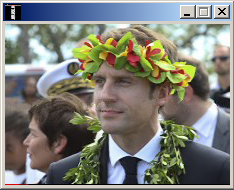 
The next image shows a freight train circa 1910 on 10th Street in
New York City. It's a steam engine in "dummy" housing to look
like a trolley, so as not to scare the horses, because trolleys
were common on 10th Street, but steam engines were not. From
http://www.shorpy.com/node/1782 . 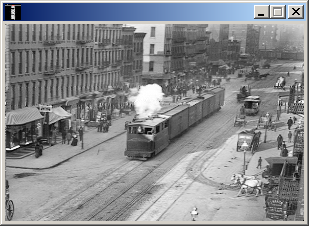 
BSR Radiogram #8
from BroadSpectrumradio.com
by James M. Branum, KG5JST
For broadcast on the 1st week of May 2018
QSL's can be sent to broadspectrumradio@gmail.com

This episode was created while I was riding on several Amtrak trains, so I thought it would be good to feature trains on this program.

My journey began last week around 10:30 pm local time on May 1, when I boarded an Amtrak Thruway bus at the Oklahoma City Amtrak station (FYI, Amtrak trains only go south from OKC at the present time), which was an uneventful and comfortable ride to Newton, Kansas,
with enough time to get some sustenance at the open-all-night Drubers donut shop, a little over 1 block from the train station. After that I boarded the Amtrak Southwest Chief, around 3 am and rode it over night until around 3 pm when I arrived in Chicago. Most of
this ride I slept through, but I did get to see the Mighty Mississippi river when we crossed from Fort Madison, Iowa into Illinois and then onward to Chicago. --- And I should mention this train was one of the wonderful double-decker Superliner trains found in the
western USA.

Chicago is always a fun layover, and enough time to sample some craft beer and an Italian beef sandwich, before getting on my next train, the Lake Shore Limited. This is a Viewliner train (single decker) but still relatively comfortable in coach, with a lot of pretty
scenery, especially after I woke up in New York.

Unfortunately we also had to deal with the US border patrol at 2 places (both in Buffalo and Syracuse), who prowled the trains even though we crossed no international border. The first time they just asked everyone if they were a US citizen, but the second time they
didn't bother with the pretence of not looking racist, and just questioned anyone whose skin tone was sufficiently dark to be suspicious in their eyes. --- It really is hard to not be disgusted at what this country has become.

Then in Albany we had a short layover, while some of the cars from our train were seperated and attached to an engine heading east to Boston, while the rest of the train continued to the south towards New York Penn Station in Manhattan, but I disembarked at the
Croton-Harmon station and then secured a ride to Stony Point, my final destination.

Probably the best scenery of the trip thus far was the journey south from Albany along the Hudson River. It was breathtakingly beautiful, with some lucky passengers even getting to see some bald eagles (I wasn't one of the lucky ones unfortunately).

And now I'm on my way back, taking the Lake Shore Limited to Chicago, but taking a different path from there, taking the Texas Eagle south and west through Illinois, Missouri, Arkansas and finally Texas until I reach Fort Worth, then a final change in trains to the
Amtrak Heartland Flyer in Oklahoma City.

So here are some pictures, including a map of the Amtrak system, a more detailed map showing the routes I traveled, the logos of the trains I took and finally some pictures if time permits. 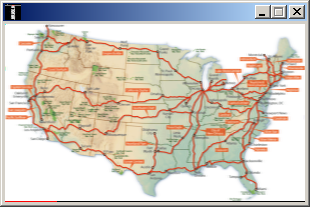 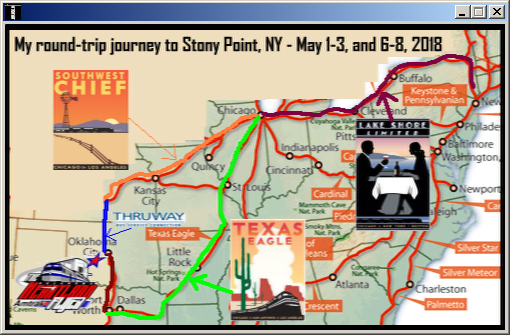 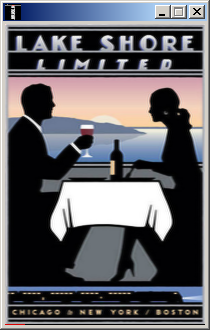 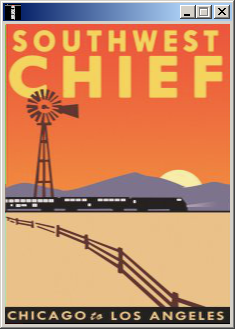 
Here are some pictures of me in Chicago...