Field Day is ham radio's open house. Every June, more than 40,000
hams throughout North America set up temporary transmitting
stations in public places to demonstrate ham radio's science,
skill and service to our communities and our nation.


Welcome to program 53 of Shortwave Radiogram.

China has taken over many of the Australian Broadcasting
Corporation's former shortwave radio frequencies into the
Pacific.

In response to budget cuts, tiA C last year ceased shortwave
broadcasting in the Asia-Pacific region ahead of a switch to FM
transmission.

"Since Radio Australia has dropped off shortwave, many of the
exact frequencies we used to use have been now taken over by
Chinese stations targetting the Asia Pacific region," he
explained.

"Now, shortwave bounces off the upper atmosphere, so a single
shortwave transmitter can be heard over thousands of kilometres.
It works particularly well over the many islands throughout the
Pacific region."

The revelation that the frequencies have been snapped up comes at
a time of heightened speculation in Australian media and
commentariat about the motives behind China's growing influence
in the Pacific.

"There's obviously a bit of interest there... the fact that China
has been ramping up while we've been pulling back," Mr Marks
said.

"I should say that Radio New Zealand International (now known as
RNZ Pacific) does a terrific job in the Pacific. They're up there
every day and they're managing to run it. It just seems odd that
Australia wouldn't be doing it."

The withdrawal of ABC's shortwave presence in the Pacific is part
of an ongoing Australian government review of the country's media
services in the wider region. 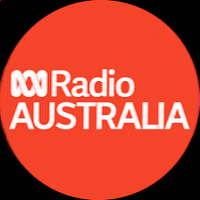 Experimental operations now under way on HF appear aimed at
leveraging low-latency HF propagation to shave microseconds from
futures market trades and gain a competitive edge in a field
where millionths of a second can mean winning or losing.
Bloomberg on June 18 reported on a secretive antenna facility
near Maple Park, in Kane County, Illinois, and speculated that
futures traders might be looking to take advantage of
lower-latency HF propagation over state-of-the-art microwave
links and undersea cables, where even the slightest path delay
could compromise a transaction. The facility is not far from a
major futures data center. As the Bloomberg article explained,
"Rapidly sending data from there to other important market
centers can help the speediest traders profit from price
differences for related assets. Those money-making opportunities
often last only tiny fractions of a second."

Radio amateur Bob Van Valzah, KE9YQ, said in a May blog post that
he recently stumbled onto the first evidence of HF radio futures
trading at a site in West Chicago, Illinois. There, he spotted HF
log-period dipole arrays on a pole, and a microwave dish he
determined was aimed at a Chicago Mercantile Exchange (CME) data
center. Additional research led him to the antenna facility in
Maple Park, Illinois, which also sported a microwave dish that
appeared aimed in the direction of the CME data center. Two
approximately 170-foot towers on the site support a directional
wire array for HF. Van Valzah is a performance engineer on leave
from the high-frequency - no pun intended - trading field.

Bloomberg said the company behind the Kane County project is New
Line Networks, LLC, a joint venture of Chicago-based Jump
Trading, LLC, and New York-based Virtu Financial, Inc. While no
FCC Part 5 Experimental license appears to have been assigned to
New Line Networks, WH2XVO is assigned to partner Virtu Financial,
which assumed the license from Services Development Company LLC.

Sites listed on the license are Aurora and Chicago, Illinois, in
addition to Homer, Alaska, and Secaucus, New Jersey - home to
several financial firms and right across the Hudson River from
many more in New York City. Part 5 Experimental license WI2XAJ
has been assigned to Toggle Communications, which is using the
West Chicago site and appears to be experimenting with a similar
system from other sites. Other entities may also be conducting
similar experiments.

The Experimental licensed systems use a variety of frequency
shift-keying modes, including FSK, AFSK, QPSK, and 8-PSK, on
frequencies ranging from about 6 MHz to 24 MHz and power levels
from 20 kW ERP to nearly 50 kW ERP, depending on the Experimental
license in question. Van Valzah pointed out in his blog post
that, while HF is low bandwidth, unreliable, and expensive, "you
can't beat it for latency."

Speculation is that the systems are taking advantage of
software-defined radio (SDR) techniques and technology.
Transmitter equipment information on the Experimental license
application for WH2XVO was redacted from the public filing.

ARRL reached out to the point of contact listed on the WH2XVO
application but has not heard back.


Image: Flowers at the Ten-Barton Gardens here in Arlington,
Virginia ...

Image: The weekly bird from the #cutlerbirdcam1 maintained by our
announcer Jim Cutler ...

Image: This strange sunset at Gettysburg, Pennsylvania was caused
by a cloud at the horizon casting a shadow upward ...


Image: This tiny funnel appeared near Centreville, Virginia on
17 June. It was too small to cause any damage. 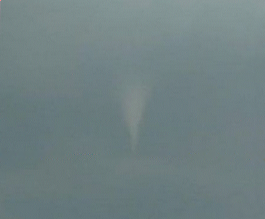 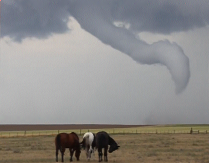 Image: On the first day of Northern Hemisphere summer,
meteorologists worldwide wore ties color-coded to show how the
planet has warmed since the late 1800s ...

Image: A painting (by an unknown artist) of summer solstice in
Hanlontown, Iowa ... 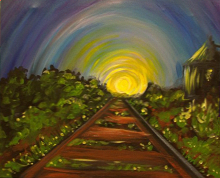 
Welcome to the BSR Radiogram #13, a production of James M. Branum (KG5JST) with support from BroadSpectrumRadio.com.


As always your QSL reports are always welcome at broadspectrumradio@gmail.com. Many folks also post reception reports to the facebook group for the Shortwave Radiogram.

According to http://www.arrl.org/field-day , "Field Day is ham radio's open house. Every June, more than 40,000 hams throughout North America set up temporary transmitting stations in public places to demonstrate ham
radio's science, skill and service to our communities and our nation. It combines public service, emergency preparedness, community outreach, and technical skills all in a single event. Field Day has been an annual event
since 1933, and remains the most popular event in ham radio."

For my field day experiences, I participated some with our local club and some on a solo basis. Here are my reports of the fun...

The EARS field day is the largest field day in Oklahoma (and since I'm a member of the club), I decided that this was the year for me to check it out. I have to admit though, I was a bit nervous, as I've never participated

in a club contest like this before and was rather nervous about how I would do during my time on the radio.

The setup for the station was pretty awesome. They ran 7 transmitters (all ICOMS, I think running 100 watts on SSB, 30 watts digital, and also some CW and satellite stuff), and most of the time had 5 or so of the
transmitter running (late night, of course there wasn't much interest in running the 10 meter radio given band conditions). I got to run the 40 meter transceiver for a bit on SSB and made a few contacts, including one
with N6R, a special event station that was set up on the grounds of the Ronald Reagan Presidential Library ( https://www.qrz.com/db/n6r ). I'm not much of a Reagan fan myself, but I nonetheless I thought it was cool that
I got to make this contact.

Along with the radio operating, I had a blast getting to know other club members (many whom I only know from our 2 meter and 10 meter Monday night nets) and of course eating some good BBQ.

The antenna setup for K5EOK was pretty impressive, as you can see here: 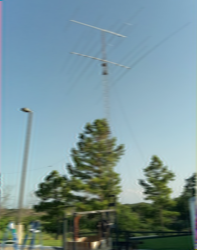 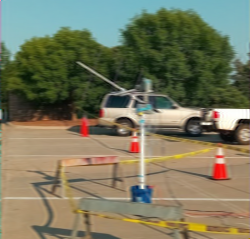 Along with my club participation, I did have some fun trying to make contacts from my Yaesu Ft-817 5 watt radio and a couple of antennas mounted on my bicycle. I didn't have much luck (too much noise on 20 meters and no
one else on 2 meter simplex when I was on) but I did enjoy getting to ride around Edmond with my new 20 meter MFJ HF Hamstick antenna ( I purchased it on amazon:

The biggest problem all weekend was the weather. Crazy thunderstorms kept me from getting out on the road as much as I wanted... but when it was clear, it was insanely hot and humid.

Also for awhile I ran my WSPR beacon from the bike, and I got some pretty amazing results, as you can see from the following maps: 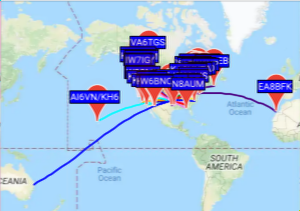 I'm still working to raise funds to continue buying shortwave air time to continue broadcasting this show. If you would like to help, your donations will make a huge difference.

Donations can be made to me via paypal here: https://www.paypal.com/cgi-bin/webscr?cmd=_s-xclick&hosted_button_id=6XREXD3VDEMGW

More details can be found on BroadSpectrumRadio.com

Speaking of funds... mine are running low, and so I may not be able to continue the weekly broadcasts in July. Please monitor our facebook page and website for info if our schedule is changing.

One possibility I am considering is that if I can't continue the weekly shortwave broadcasts, I may still produce the weekly programs for airing on my Part 15 micropower AM radio station (more for my own amusement than
anything), but also share them online. So if you are more interested in the content and are not as concerned about the fun of hearing on SW, please let me know (broadspectrumradio@gmail.com), and I'll take that into
consideration. But if you love hearing us on shortwave, please consider making a donation. 30 USD per week is the cost to keep this airing on WRMI, and I really would like to do that. Anything, even $5, would be helpful.

That's it for this week. Tune in again soon, whether it is on shortwave (and hopefully it will be) or online. And of course, please send your QSL reports to broadspectrumradio@gmail.com.