4S - DK7TF and DH6ICE will be active again as 4S7DLG from Sri Lanka
(AS-003) from 22 November to 6 December. They will operate mainly
SSB and FT8. QSL via LoTW, or via DK8ZZ (direct or bureau).
F - The Radio Club de Nice (F4KJQ) will be active as TM8AB between 24
November and 12 December to commemorate the 95th anniversary of the
first Transatlantic amateur two-way contact between Leon Deloy F8AB
and Fred Schnell 1MO (28 November 1923).
F - F4ESV, F5LPY and F8EFU will be active as TM18EHF from 29 November
to 13 December for the European Women's Handball Championship. They
will operate CW, SSB and digital modes on 160-10 metres. QSL via
F4ESV, direct or bureau.
FS - Look for Paul FS/K9NU, John FS/W9ILY, Mike FS/W9MK, John FS/K9EL as
well as Marco FS4WBS to be active from St. Martin (NA-105) from 28
November to 8 December. They will operate CW, SSB, FT8 (Fox & Hound
mode on 3567, 7056, 10131, 14090, 18095, 21091, 24911 and 28091
kHz) and some RTTY on 160-6 metres with three stations and a focus
on 80 and 160m during hours of darkness. QSL FS4WBS via LoTW or
IZ1MHY; QSL others via LoTW, Club Log's OQRS, or via home calls.
HA - Established as Magyar Rovidhullamu Amator Egyesulet (Hungarian
Shortwave Amateur Union) in 1928, the Hungarian Radioamateur
Society (MRASZ) celebrates its 90th anniversary and commemorates
its founding fathers. Look for special event stations HG90MRASZ,
HG90MRAE, HA90AM (Anzerberger Mihaly), HA90HL (Horvath Laszlo),
HG90BD (Bibo Denes), HG90BJ (Brisky Jozsef), HG90FI (Fodor Istvan),
HG90HL (Hollos Lajos), HG90KI (Kemeny Istvan), HG90MF (Mayer
Ferenc), HG90NK (Nekolny Kurt) and HG90NS (Nagy Sandor) to be
active from 15 November to 15 December. QSLs via the HA bureau
and LoTW. Logsearch and downloadable awards can be found at
http://www.mrasz.org/onlinelog-award-download-90.
OH - Santa's Radio Club (https://oh9s.fi) will be active as OH9S on 1-8
December from Finnish Lapland, some 200km above the Arctic circle.
Activity will be mainly on 80m-6m on all modes, FT8 included. All
QSOs will be confirmed automatically via the bureau and LoTW;
direct cards via Club Log's OQRS (preferred) or via OH9MM.

T32 - Nobu, JA0JHQ (http://pandasan.jimdo.com/) will be active as T32NH
from Kiritimati (Christmas Island, OC-024), East Kiribati on 5-11
December. He will operate mostly CW and FT8 on 160-6 metres, and
will participate in the ARRL 10 Meter Contest. QSL via LoTW
(preferred) or direct to JA0JHQ.

Welcome to program 76 of Shortwave Radiogram.

Several long-term forecasts have been released for the coming
season and what has been the "norm" of late seems to be more
abnormal conditions.

Across Canada and much of the U.S. the west will be generally
warmer than than normal, while the east will experience general
colder conditions.

"A developing El Niño typically signals a milder winter across
most of the country, and for Western Canada that is exactly what
we expect for the upcoming season," said Chris Scott, Chief
Meteorologist at The Weather Network. "For the Western Prairies,
this means the abnormally cold fall has not been a sign of things
to come. However, from Ontario to Atlantic Canada we are seeing a
snowy sneak preview of what will become the dominant pattern for
winter."

Across Europe, "unsettled" might be the operative word, and
apparently accompanied by powerful windstorms which will affect
various countries at various times across most of Europe.

Australia, where "winter" is actually summer in the southern
hemisphere, experienced one of its hottest years ever last year.
This appears to be the same this year with temperatures predicted
to be above normal for virtually the entire country through
December and January. Conditions are also expected to be drier
and that would mean those regions already affected by drought
would have a low chance of recovery.

French automaker Renault has unveiled an ambitious plan to
construct two wind-powered roll-on/roll-off vessels by as early
as 2020.

For the project, Renault has partnered with the French start-up
Neoline, which was founded in 2015 with the goal of becoming the
world's first shipowner specializing in sailing cargo ships.

According to a press release, Renault and Neoline will first
develop a 136-meter vessel and 4,200 square meters of sail area
to serve as a model. The end goal, however, is to build two
sail-powered ships by 2020-2021 to service a pilot route joining
Saint-Nazaire, the U.S. Eastern seaboard and Saint-Pierre &
Miquelon off the coast of Newfoundland.

Renault says the project is part its environmental strategy aimed
at reducing its carbon footprint by 25% between 2010-2022, with a
6% target for its supply chain compared to 2016 levels.

"Groupe Renault's objective is to reduce the environmental impact
of each vehicle throughout its entire life cycle, from parts
transportation up to delivery and end-of-life processing,"
commented Jean-Philippe Hermine, Vice President of Strategic
Environmental Planning at Renault Group.

Renault, which has been making cars since 1898, now has a
presence in 134 countries and sales of 3.76 million vehicles in
2017. Nearly 60% of the Group's parts and vehicles are
transported by sea.

Jean Zanuttini, CEO of Neoline, stated: "We are especially
pleased that Groupe Renault, a key player in accessible and
sustainable mobility for all, is the first partner to join us on
board our journey by trusting in Neoline's maritime transport
solution. Considering that the traditional sea freight accounts
for nearly 3% of CO2 emissions in Europe, Neoline aims to build
an innovative French solution to address a global environmental
challenge while remaining within an industrial and competitive
framework, with the support from its partners."

Image: Artist's rendition of the ship ... 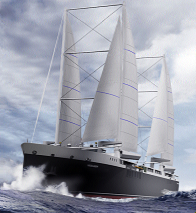 Radio broadcast on HF (high frequency or shortwave) has a solid
role to play in the pantheon of media in the Australian and
pan-Pacific context. It might be off the radar for the urban
masses, but HF radio is the proven, economical alternative to
satellite and cable for communication over continental or oceanic
distances. Our commercial airlines use HF radio every day. So do
our mining companies and emergency services. People holidaying in
our remote areas buy or rent HF transceivers for their cars.
Australia has the largest number of civilian users of HF radio in
the world.

For thirty years a simple system of three HF transmitters quietly
provided Australian Broadcasting Corporation (ABC) radio to
remote populations across inland Australia, the Northern
Territory (NT). Centered on Alice Springs, Tennant Creek and
Katherine each transmitter reached out nominally 450 km, covering
an area of nearly 2 million square kilometres. In practice the
area serviced was larger, extending into Queensland and Western
Australia. Such is the utility of this versatile medium. The
audience was small, only a couple of hundred thousand, living or
moving through the most remote places in Australia, but this was
their lifeline.

During the cyclone season, storm alerts and flood warnings would
reach people in the inland beyond the call of AM and FM networks.
Yes, such people do exist in Australia and elsewhere in the
Pacific.

Like many marginalised communities the HF radio listeners of the
outback struggled to make urban elites understand their very real
world. So in 2016 when the ABC announced the closure of the
domestic HF transmitters in order to fund its DAB+ radio rollout
in Canberra and Hobart, the backlash from the remote communities
was shrugged off and the closures proceeded in 2017. ABC pointed
at its satellite as an alternative, but had no answer when asked
how to equip a jillaroo's horse, a dusty 4WD or an offshore
tinnie with a fragile satellite dish, an expensive receiver and
the power point to run it all.

People who are used to an effective service tend to take its loss
badly. So it has been in the NT. Politicians were pursued by the
inland listeners wanting a better deal. The matter has culminated
with the main opposition Australian Labor Party pledging to
restore the HF distribution of ABC within Australia if it wins
the forthcoming the federal election.

Let's hope political expediency at the federal government level
and within ABC doesn't foul this up. We don't want a half-baked
resurrection as a sop to fend off critics of the ABC or to let
politicians grandstand.

The three domestic HF sites in the NT cost a lot more than
AUD$1.9 million p.a. to run. That was a figure bandied about by
ABC after criticism of its DAB+ expansion costs. But for a sum in
the order of half that, plus re-establishment costs, a service
can be implemented which would have greater coverage, better
reliability and lower outgoings. What's not to like? The key is
the former Radio Australia HF station at Shepparton, Victoria.

The cost of electricity at the NT sites was horrendous. Apart
from feeding three thirsty 50 kW tx, huge air conditioning plant
was required at each site to pull out waste heat and combat 50°C
summer temperatures. Maintenance costs were savage. On-air
availability was lousy (worst in the ABC network) because of
environmental challenges and long maintenance travel times.

So here's a plan: re-locate a near-new Continental 418G HF 100 kW
transmitter from Tennant Creek to Shepparton. Electricity is much
cheaper and more reliable at Shepparton. It's a cooler site and
has permanent, trained staff. The consolidation of spares and
expertise with the other Continental transmitters at Shepparton
makes engineering and economic sense. Re-locate the two small
6-12 MHz HR2/2/0.4 and HR2/2/0.6 aerials from the former RA
station at Brandon. Erect them both as AHR2/2/0.4, align one on a
boresight of 000°T and the other one on a boresight of 320°T.
Feed both aerials from the transmitter via a splitter, run the
transmitter at 80 kW so each array receives 40 kW. Run a 5.9 MHz
channel at night and a 9 or 11 MHz channel during daylight.
Bingo. You now have a two-frequency network covering the sector
between 020° & 300° at a range of 1500 km -> 3000+ km. What a
great conduit for cyclone/flood alerts, quality news and
entertainment and if the ABC can manage that then it might just
get back to meeting its charter obligations to all Australians. 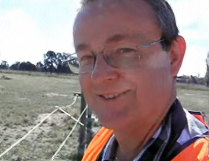 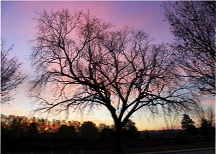 The Kennedy Center in Washington DC, with lights for the
holidays. From bit.ly/2Q1471D ...

Our painting of the week is by Australian Christopher Vidal. From
bit.ly/2FO238t ... 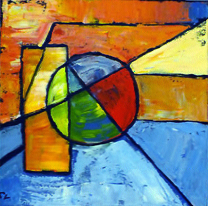 Next, some ASCII art. Use a monospace such as Courier. Or copy to
a word processor or email client and select a monospace font ... 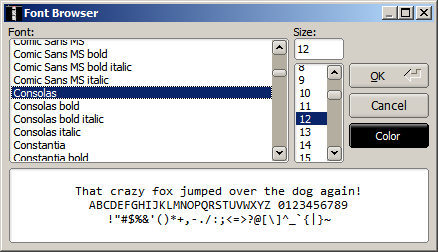 By the way: next week because of maintenance, the Channel 292 transmitters will stay quiet for a few days. Because of that there will be no Slow Scan Radio on 6070 kHz on December 8.

I have been looking for an alternative, but I didn't succeed to have that in place before this show. Please watch www.slowscanradio.com for an update on that. There is a chance, next week we will be on another frequency
for once. It can also be that we skip one week.

By the way our copyright info and other info on the images can be found on our website this week.
de k 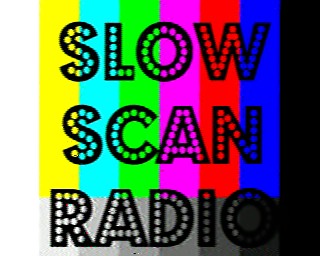 taken 13 years ago, near to Trethowel, Cornwall, Great Britain 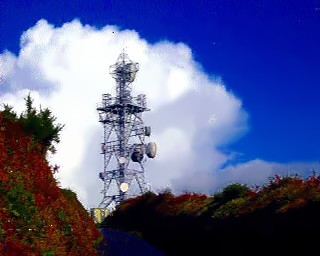 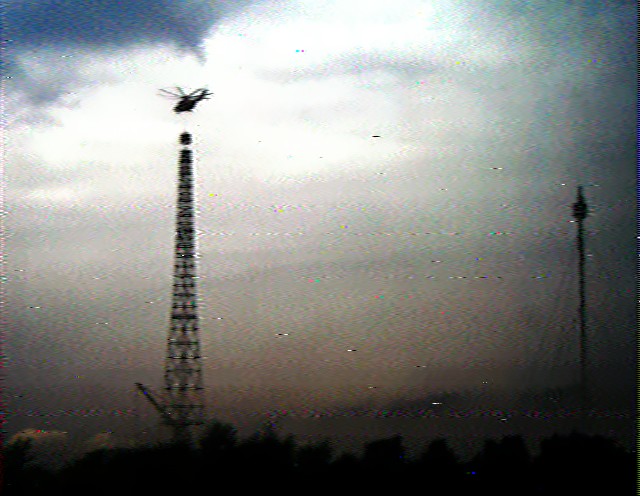 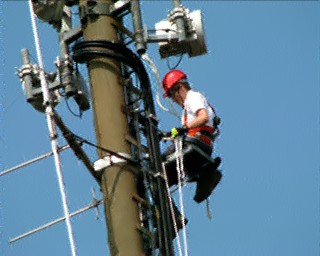 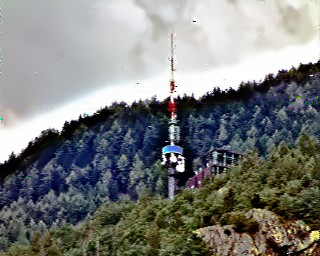 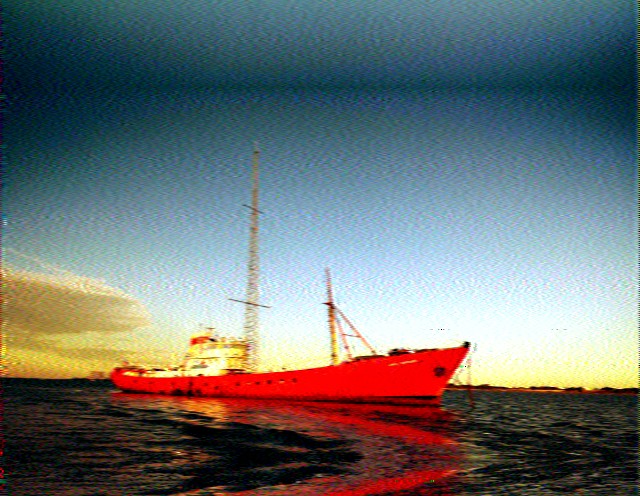 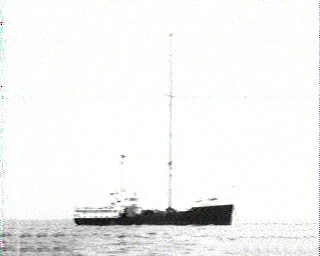 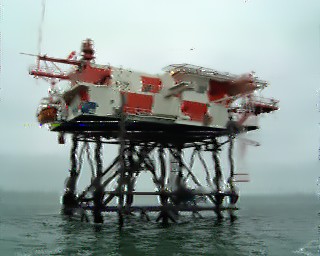 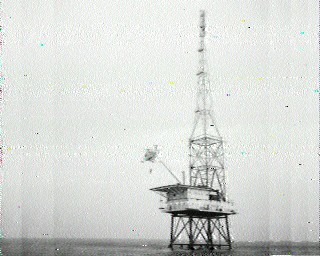 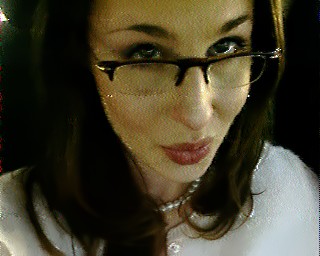 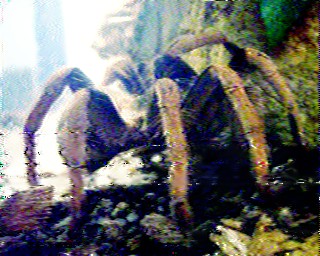 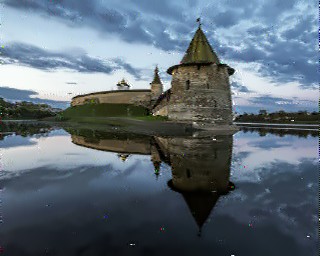 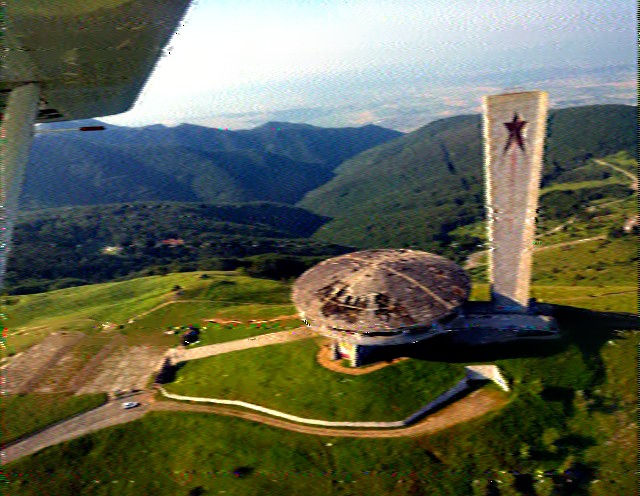 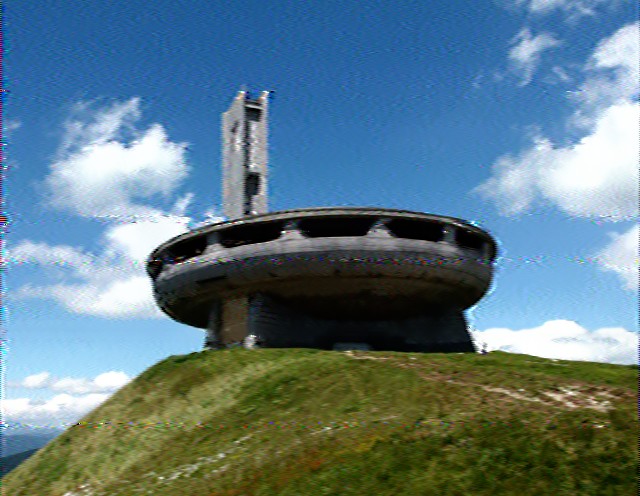