6W - The annual 6V1A expedition to the island of Goree (AF-045) will be
conducted on 7-9 December. Tafa 6W1KI, Ouzin 6W1PZ, Jul 6W1QL, John
6W7JX and others will operate SSB and CW on various bands with
two stations. PayPal 6v1a.aras[@]gmail.com for a direct QSL.
9M2 - Rich, PA0RRS will be active again as 9M2MRS from Penang Island
(AS-015), West Malaysia from 2 January to 15 February. He will
operate mainly CW, RTTY, PSK and FT8 on the HF bands. QSL via Club
Log's OQRS, LoTW, eQSL or via PA0RRS (bureau preferred).
FO - Cezar, VE3LYC and Adrian, KO8SCA [425DXN 1433] are scheduled to
arrive at Papeete (Tahiti) around 7 UTC on 3 December, and to reach
Rikitea (Mangareva Island) on 4 December around 23 UTC. Their
tentative operating schedule is to be QRV as TX0M from Morane Atoll
(OC-297, new one for IOTA) on 6-10 December, and as TX0A from Maria
Est Atoll (OC-113) on 12-16 December. "The final decision regarding
the sailing itinerary", however, "will be made at the time of
leaving Mangareva, based on the weather forecast".
It will be possible to track the DXpedition's progress via the
InReach system: see https://tx0a-tx0m.weebly.com/ for the link,
which will be made available between 2 and 19 December. The system
will also allow the operators to exchange information with Johan
(PA3EXX), their Pilot Station. "If you have any message for us",
they say, "please forward it to Johan, and he will ensure that is
delivered. He will keep the community informed on our progress, and
provide us with appropriate feedback".
Plans are to operate SSB and CW with two stations on 40-10 metres.
In order to maximize the number of unique callsigns logged, one
station will be QRV on 20m as long as the propagation permits. The
logs will be uploaded to Club Log when the operators return back
home. QSLs via Club Log's OQRS (direct or bureau), or via VE3LYC
(direct or bureau).
HR - Tom, N9EAW will be active holiday style as HQ9T from Roatan Island
(NA-057) on 1-18 December. He will operate SSB and slow CW on the
HF bands. QSL direct to N9EAW.

Welcome to program 77 of Shortwave Radiogram.

Cities such as Santiago de Chile and Cali in Colombia have
started using electric buses. Others like San Jose, Costa
Rica, and Panama City are in the middle of pilot projects to
make transportation cleaner.

A new fleet of 200 buses in Chile's capital, known as Third
Millennium (Tercer Milenio), is to replace the current
transportation system that was launched in 2007.

"We've said all along that a civilized nation needs a
high-quality transport system that is safe, clean and
sustainable," Chilean President Sebastian Pinera said while
presenting the new buses in October.

"Our project aims to replace the notorious Transantiago."

The new Santiago fleet includes 490 diesel buses with the Euro 6
emission standard, the strictest one in place so far.

In Colombia, 125 electric buses were ordered for the city of
Cali. It is the first bus fleet of this type in the whole
country. In May 2019, 26 of them will start operating. The new
buses will complement the MIO transport system (Masivo Integrado
de Occidente).

The buses, which have eight battery packs, will have a maximum
range of 240 kilometers (149 miles). According to MetroCali, the
city's transport system, the buses have "regenerative" brakes,
helping to recharge the batteries while breaking.

"We're kicking off the process of modernization that our system
must undergo in the coming years to make bus fleets comply with
zero-emissions policies," said MetroCali President Nicolas
Orejuela.

In 2019, Costa Rica is to start a pilot project involving three
electric buses that will commute between different cities. At the
end of 2017, the country approved comprehensive electric
transportation legislation and incentives to promote greener
transportation.

Argentina for its part is about to implement its own one-year
pilot project involving eight electric buses. The city of Buenos
Aires launched a clean mobility plan (Plan de Movilidad Limpia)
to reduce harmful emissions.

In August 2018, Panama City started running electric bus tests in
the old city center. People can use the service free of charge
for six months.

"If the current fleet of buses and taxis in 22 Latin American
cities were replaced with electric vehicles right away, the
region could save almost $64 billion (€65.2 billion) in fuel by
2030, emit 300 million tons of carbon dioxide less and save
36,500 people from premature death," a study by the International
Automobile Federation (FIA) pointed out.

Latin America and the Caribbean "account for some 10 percent of
global emissions of greenhouse gases and are among the regions
with the greatest decarbonization potential," United Nations
researchers added.

That gunk lines the bottom of what's called an algal turf
scrubber at the Port of Baltimore. The meter-wide, shallow
channel runs the length of a football field alongside one of the
port's giant parking lots.

"Actually, it's always pretty," May corrected himself. Even the
gunk. Because that gunk is removing pollution from the Chesapeake
Bay. Plus, May's colleagues are turning it into clean, renewable
electricity.

The Chesapeake needs the help.

Like many waterways around the world, the bay is polluted with
excess nutrients from farm fertilizer runoff, city wastewater and
other sources. Algae feast on those nutrients, triggering massive
growth that chokes out other aquatic life. Last summer, algal
growth left an average of 4.6 cubic kilometers of the bay without
oxygen.

A third of the pollution reaching the bay literally falls out of
the sky.

Fossil fuels burned in power plants, cars and elsewhere create
nitrogen oxide air pollution, which ultimately ends up in the
bay, either attached to airborne particles or dissolved in
rainwater.

Forests would soak up that pollution. But like many urban areas,
the Port of Baltimore has a pavement problem. There's not a tree
to be found at the entire 230-hectare Dundalk Marine Terminal,
where the algae scrubber is located.

So regulators require the port to remove as much pollution from
the bay as its parking lots allow in. That's where the algal turf
scrubber comes in.

The scrubber is like "a controlled algal bloom on land," May
said, "which puts the algae to work pulling nutrients out of the
water."

The city of Durham, N.C., is planning to build another scrubber
to clean up a local reservoir. A pilot study found it would cost
about half as much as typical pollution control measures, such as
constructed wetlands, and much less than retrofitting existing
systems. Others are up and running in Florida.

The algal turf scrubber creates one big challenge, May said.

"What do we do with that algae? You have to have an end use or
else you're going to pile that algae up very quickly," he said.

It's high in protein and omega-3 fatty acids. It's been turned
into animal feed. It can be fermented into biofuels. Some of
May's colleagues have used it to launch a fertilizer business.

But here at the Port of Baltimore, they're turning it into
electricity.

May works with University of Maryland colleague Stephanie
Lansing, an expert in a process called anaerobic digestion. It's
not much different from our own digestion.

"You have bacteria in your gut that break down food. We're doing
that same process in an anaerobic digester," Lansing said. "We're
breaking down the material, and we're producing energy in the
process."

In this case, the microbes digesting the algae produce methane
biogas. The biogas runs a fuel cell.

"The fuel cell is actually a very efficient way to use the
energy," she said. This small, pilot system produces a modest
amount of electricity. 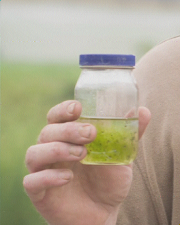 During December, Comet Wirtanen may be visible to the naked eye,
but smaller than this telecopic view. From cbsn.ws/2QIOThc ...


This image of asteroid Bennu, from a distance of 80 km, was taken
by the OSIRIS-REx spacecraft on 3 December. From
go.nasa.gov/2QfFwGk ...


The engine of the Soyuz-FG rocket launching three new crew
members to the International Space Station, 3 December. From
bit.ly/2AX95lz ... 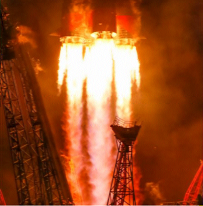 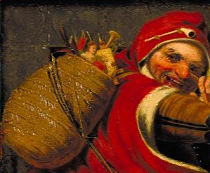 
This is Shortwave Radiogrm in MFSK32 ...


Next, a message from Tecsun Radios Australia ...

Tecsun Radios Australia is running a great competition for all
Shortwave Radiogram listeners! Starting from next week they’ll
start transmitting images at the end of every Radiogram
broadcast.

All you need to do is decode and collect the 6 Tecsun Radios
images transmitted each week on Shortwave Radiogram for your
chance to win a Tecusn PL880 Radio prize pack worth over $250
Australian Dollars!

Share all 6 images on Twitter @TecsunRadios and send them an
email hello@tecsunradios.com.au. The winner will be judged on 1
February 2019. They’ll even ship the prize pack anywhere in the
world! 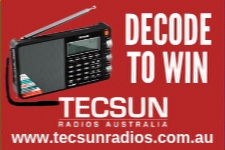