Welcome to program 87 of Shortwave Radiogram.

Russia Mulls Disconnecting From Internet In Test Of Cyberdefenses

Russia is planning to temporarily disconnect from the global
Internet in the coming weeks as it tests its defenses against
cyberattacks.

Russian media reported on February 11 that the test, which will
cut off all data routes connecting Russia to the outside
cyberworld, will occur before April 1, though a firm date has yet
to be set.

A bill was submitted to the State Duma on December 14 on the need
to ensure the autonomous operation of the Russian segment of the
Internet if there is no access to foreign servers.

Once approved, the legislation will require the local Internet,
known as the RUnet, to pass through exchange points managed by
Russia's telecommunications regulator, Roskomnadzor.

A note attached to the bill explained that the draft amendments
to the Law on Communications were worked out "taking into
consideration the aggressive nature of the September 2018 U.S.
national cybersecurity strategy," in which "Russia directly and
without any evidence is accused of cyberattacks."

Once in force, the system will protect Russia in the event of
cyberwar while also filtering Internet traffic to the country.

According to the bill, "technical devices" will be installed in
the Russian segment of the Internet to locate traffic sources.

Those "technical devices" will be used when necessary to limit
access to online resources with banned information," the bill
says.

Russia will also establish its own national domain-name-server
(DNS) system -- a decentralized naming system for computers,
services, or other resources connected to the Internet or a
private network, which will help to identify computers from which
data is being added to the Internet.

Interfax reported on February 11 that a bill on the steady
operation of the RUnet has been included in the February 12
agenda of the State Duma session.

In March last year, Putin's then-Internet adviser, German
Klimenko, said Russia would be prepared with its own segment of
the Internet should Western countries seek to punish it by
cutting off all access.

Russia has been accused of carrying out cyberattacks and of using
the Internet -- particularly social networks such as Facebook and
Twitter -- to attempt to sow discord and interfere in elections
in the West.

In response, social networks have been aggressively seeking out
so-called "troll farms" which use deceptive accounts to spread
false information.

With reporting by The Independent, Interfax, and ZDNet


Another reminder that the Winter SWL Fest will be 28 Feb to 2 Mar
near Philadelphia. I will be there to demonstrate Shortwave
Radiogram and visit radio friends. It's OK to register at the
door, although banquet attendance requires some advance notice.
Information at www.swlfest.com.

The Fest is sponsored by NASWA, the North American Shortwave
Association: www.naswa.net.

And there will be another round of SSTV from the International
Space Station this weekend, Friday 0845 to Sunday 1725 UTC,
145.8 MHz (FM).

"I declare the Opportunity mission is complete," NASA official
Thomas Zurbuchen said Wednesday of the U.S. Mars rover mission
that outlasted its projected life span by more than 14 years.

The Opportunity rover succumbed to a Martian dust storm and lost
contact with Earth nearly eight months ago. NASA finally gave up
on it after more than 800 attempts to re-establish contact.

Zurbuchen, associate administrator for science at the National
Aeronautics and Space Administration, said at a news conference
at the space agency's Jet Propulsion Laboratory in Pasadena,
Calif., that he shared the news "with a deep sense of
appreciation and gratitude."

Opportunity was launched in 2003 and reached Mars a year later,
close on the heels of its "twin," a rover named Spirit. Both
rovers, roughly the size of golf carts, were tasked with
activities that would last about 90 days, but both far outlasted
their original missions, spending years exploring the planet's
rocky terrain while using solar panels for engine power.

Spirit got stuck in 2009 and stopped communicating with NASA a
year later. It is believed to have shut down for good during the
harsh Martian winter.

Opportunity continued to explore until last year when a dust
storm consumed the entire planet and blocked communication with
Earth.

NASA scientists said they had hoped the wind would eventually
clear debris off Opportunity's solar panels and allow it to power
up and re-establish contact. But repeated attempts to reach the
rover failed.

Late Tuesday, NASA scientists made one last try to reach it. By
Wednesday, the agency announced the long mission was finally
over.

But NASA's work on Mars continues. The rover Curiosity has been
exploring another part of the planet since 2012.

Next year, two more rovers - one from China and one from a
combined effort by Russia and the European Union - are expected
to begin their own voyages to the Red Planet.

Image: This 2004 photo shows the shadow of the rover Opportunity
in the Meridiani Planum region of Mars ... 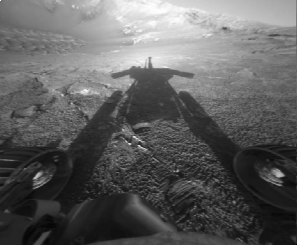 NASA's Mars Atmosphere and Volatile Evolution (MAVEN) orbiter is
taking on a new job as it shifts into a lower orbit to act as a
communications relay for the Mars 2020 mission slated to launch
next year. Under commands from mission control, the unmanned
science probe will dip into the upper layers of the Martian
atmosphere, which will slow it down and reduce its apogee (or
highest altitude) from 3,850 to 2,800 mi (6,200 to 4,500 km).

For the past four years, MAVEN has been busy studying the Martian
atmosphere, its mechanisms, and why the atmosphere is slowly
escaping into space. To achieve this, the spacecraft was placed
in an eccentric orbit that took it out as lq tkb850 mi (6,196
km) from the planet's surface, and as close in as 93 mi (150 km).

So this isn't completely new territory for Maven. The orbiter has
actually dipped into the atmosphere on nine previous occasions to
gather data. This means that MAVEN is capable of a maneuver known
as aerobraking. That is, by firing its thrusters, the spacecraft
can be made to skim into the upper reaches of the Martian
atmosphere, slowing it down and causing its orbit to gradually
decrease by about 1,000 mi (1,700 km).

According to NASA, this shift in the orbit will not only bring
MAVEN closer to Mars, but it will decrease its orbital period, so
it will circle the Red Planet 6.8 times per day instead of 5.3
times. This means that MAVEN will be in a better position to
relay data to and from the Mars 2020 rover and make contact more
often using its ultra high-frequency radio transceiver.

MAVEN was originally intended to operate for two years, but the
spacecraft is continuing to operate normally, and mission control
is managing its fuel on the assumption it will continue to
function until 2030. Meanwhile, it will carry on with both its
atmospheric studies and its new relay duties.

NASA says that the aerobraking maneuver will take place over the
next two and a half months, or 360 orbits. Once the thrusters
have set the craft on its new trajectory, the atmosphere will do
the rest of the work.

"The MAVEN spacecraft has done a phenomenal job teaching us how
Mars lost its atmosphere and providing other important scientific
insights on the evolution of the Martian climate," says Jim
Watzin, director of NASA's Mars Exploration Program. "Now we're
recruiting it to help NASA communicate with our forthcoming Mars
rover and its successors."


Our listener and friend Mike, AE7XB, experienced unusually heavy
snow at his home in western Washington ... 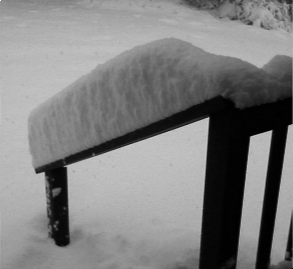 A Dodge Charger in "mean green" at the Chicago Auto Show. From
bit.ly/2RZblPX ...

A technician works on an electricity pylon in Roye, France. From
bit.ly/2SyZo8Q ... 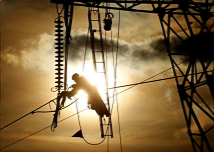 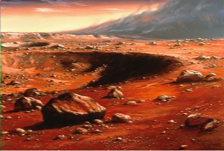 
Please also listen to SW Radiogram on 9400 kHz, just half an hour after this show!


Another show with data:


If you're listening to one of the websdr's, quite often results with SSTV will be better with kiwisdr's. You can find an overview of those on www.sdr.hu

Info and copyrights etc. will be on www.slowscanradio.com this week.

Please also listen to SW Radiogram on 9400 kHz, just half an hour after this show!

Another show with data:


If you're listening to one of the websdr's, quite often results with SSTV will be better with kiwisdr's. You can find an overview of those on www.sdr.hu

Info and copyrights etc. will be on www.slowscanradio.com this week.

3.
Pilot Marek Szufa in his replica of a Curtiss JN-4 (SP-SHUF)..
Photographer: Łukasz Golowanow
The copyright holder of this file allows anyone to use it for any purpose, provided that the copyright holder is properly attributed.

5. 6. 7. 8.
Images, received Sunday or Monday before the show aired, from the ISS by Kees, PE1RNL. Original pictures from the ISS were in PD120.

15.
A family of Sámi people in front of their lavvu, with a dog in the foreground between 1890 and 1900.
Public domain