Tulip season is only just beginning in the Netherlands, but it's
already over in Texas! ...

Welcome to program 95 of Shortwave Radiogram.

Study shows the International Space Station is brimming with
bacteria

Knowing the make up the microbial community on the International
Space Station (ISS) would be of huge use to space agencies trying
to safeguard the wellbeing of their astronauts. This has been a
focus of NASA's for a while, and its scientists have just put the
finishing touches on what they say is the first comprehensive
catalog of all the bacteria and fungi inside the ISS, describing
a bacteria-filled environment not dissimilar to a gym or an
office.

Over a period of 14 months, researchers gathered samples from
eight different surfaces around the inside of the ISS, including
viewing windows, toilets, exercise platforms and dining tables.

These surface samples were analyzed using traditional culture
techniques and gene sequencing methods, and the results paint a
picture of an enclosed environment brimming with bacteria. The
microbes present on the ISS were found to be mostly linked to
humans, with Staphylococcus aureus and Enterobacter among them.

These bacteria are rife in hospitals, offices, gyms and similar
enclosed environments that are home to human activity. This is
perhaps not all that surprising, given that 230 different people
from 18 different countries have visited the ISS and it has been
continuously occupied since 2000. But that doesn't make the
research any less important, as scientists seek to better
understand the microbes that inhabit these environments with a
view to developing safety measures for missions to the Moon, Mars
or maybe beyond.

"Specific microbes in indoor spaces on Earth have been shown to
impact human health," says Dr Kasthuri Venkateswaran from NASA's
Jet Propulsion Laboratory and author on the new study. "This is
even more important for astronauts during spaceflight, as they
have altered immunity and do not have access to the sophisticated
medical interventions available on Earth. In light of possible
future long-duration missions, it is important to identify the
types of microorganisms that can accumulate in the unique, closed
environments associated with spaceflight, how long they survive
and their impact on human health and spacecraft infrastructure."

The team published its research in the journal Microbiome.

The supermassive black hole is at the center of a huge galaxy
called M-87, which is 55 million light-years from Earth.

The picture, the result of decades of work by the Event Horizon
Telescope Collaboration (EHTC), isn't much to look at. It's a
fuzzy orange and yellow donut floating in space, but the
implications for physics, and the incredibly intricate way that
researchers got the picture, is science at its best.

The picture is exactly what scientists, particularly the late
Albert Einstein, predicted it would look like. There is the
eponymous center black hole where gravity is so powerful even
light cannot escape, and a circular area of superheated energy
rotating around the celestial entity at nearly the speed of
light, called the event horizon.

"We now know that a black hole that weighs 6.5 billion times what
our sun does exists in the center of M-87," EHTC scientist Shep
Doeleman announced at a press conference Wednesday in Washington.
"And this is the strongest evidence that we have to date for the
existence of black holes."

This picture is so important because while scientists have been
seeing the effects that black holes have on the structures around
them, they have never actually seen one, and this photo in effect
proves their existence, as well as one of the foundational
principles of Einstein's theory of general relativity.

At its center, the black hole is so big that even though it's a
long distance away, scientists reasoned it was likely to be the
largest such structures viewable from Earth. For that reason,
M-87 was chosen for the experiment.

More than 200 scientists worked for about a decade to link the
global network of eight radio telescopes, using atomic clocks.
One by one in an exact sequence, the instruments were pointed at
M-87 at what was, in effect, the same time, back in April 2017.

When the experiment was over, the researchers had five petabytes
- or a million gigabytes - of visual information to review. At
the press conference, researchers told the story about how it was
much quicker to take the data by plane to the various
supercomputers being used to analyze the information. They said
this was easier than trying to transfer that much data into the
cloud.

It took two weeks for a group of supercomputers to analyze the
data and begin to form all the collected information into the
modest photo that scientists released Wednesday.

And once that photo was collected, the researchers waited two
years to publish their data while scientists from all over the
world checked their work and signed off on the idea that what was
photographed was actually a black hole.

The team isn't done, though. They already are planning to create
even bigger telescopes than the Earth-sized one they used by
incorporating space telescopes like the Hubble and the
soon-to-be-launched James Webb Space Telescope. This should allow
researchers to take photos of dozens of other black holes.


Image: An image of the black hole at the center of Messier 87, a
massive galaxy in the nearby Virgo galaxy cluster ...

Solar Cycle 25 Predicted to be Similar to Cycle 24

Scientists charged with predicting the Sun's activity for Cycle
25 say it's likely to be much like that of current Cycle 24,
which is declining and predicted to bottom out in 2019 or 2020.
Solar Cycle 25 Prediction Panel experts said Cycle 25 may get off
to a slow start but is anticipated to peak between 2023 and 2026
with a sunspot range of 95 to 130. This is well below the typical
average of 140 to 220 sunspots per solar cycle. The panel
expressed high confidence that the coming cycle should break the
trend of weakening solar activity seen over the past four cycles.
The Solar Cycle Prediction Panel forecasts the number of sunspots
expected for solar maximum, along with the timing of the peak and
minimum solar activity levels for the cycle. The outlook was
presented on April 5 at the2019 NOAA Space Weather Workshop in
Boulder, Colorado.

"We expect Solar Cycle 25 will be very similar to Cycle 24:
Another fairly weak cycle, preceded by a long, deep minimum,"
said panel co- chair Lisa Upton, a solar physicist with Space
Systems Research Corp. "The expectation that Cycle 25 will be
comparable in size to Cycle 24 means that the steady decline in
solar cycle amplitude, seen from cycles 21 – 24, has come to an
end and that there is no indication that we are currently
approaching a Maunder-type minimum in solar activity."

The solar cycle prediction gives a rough idea of the frequency of
space weather storms of all types, from radio blackouts to
geomagnetic storms and solar radiation storms. In addition to its
effects on Amateur Radio signal propagation, space weather can
affect power grids; critical military, airline, and shipping
communications; satellites and GPS signals, and can even threaten
astronauts through exposure to harmful radiation.

Solar Cycle 24 reached its maximum in April 2014 with a peak
average of 82 sunspots. The Sun's Northern Hemisphere led the
sunspot cycle, peaking more than 2 years ahead of the Southern
Hemisphere sunspot peak. Given that the Sun takes 11 years to
complete one solar cycle, this is only the fourth time that US
scientists have issued a solar cycle prediction. The first panel
convened in 1989 for Cycle 22.

For Solar Cycle 25, the panel hopes for the first time to predict
the presence, amplitude, and timing of any differences between
the northern and southern hemispheres on the Sun, known as
hemispheric asymmetry. Later this year, the panel will release an
official sunspot number curve showing the predicted number of
sunspots during any given year and any expected asymmetry. The
panel will also look into the possibility of providing a solar
flare probability forecast.

"While we are not predicting a particularly active Solar Cycle
25, violent eruptions from the sun can occur at any time," said
Doug Biesecker, panel co-chair and a solar physicist at NOAA's
Space Weather Prediction Center (SWPC). An example of this
occurred on July 23, 2012, when a powerful coronal mass ejection
(CME) eruption missed Earth but enveloped NASA's STEREO-A
satellite. A 2013 study estimated that the US would have suffered
between $600 billion and $2.6 trillion in damages, particularly
to electrical infrastructure, if the 2012 CME had been directed
toward Earth. The strength of the 2012 eruption was comparable to
the famous 1859 Carrington event that caused widespread damage to
telegraph stations around the world and produced aurora displays
as far south as the Caribbean.


Screen capture from a Deutsche Welle film about alternatives to
slash-and-burn farming in Belize. From bit.ly/2X5ZjHd ...

A worker cleans the statue of Russian astronaut Yuri Gagarin, the
first person who flew to space, ahead of Cosmonautics Day, which
is celebrated on April 12, in Moscow, Russia. From bit.ly/2Uv1BmL
...

A farming technology container with 900 plants is lit by LED
lights outside an IKEA store near Duesseldorf. From
bit.ly/2IdEQwU ...

A rainbow is seen across the Yosemite Valley in front of El
Capitan in Yosemite National Park in California. From
bit.ly/2Uf8d3j ...

A sculpture of the performer Cardi B at the Brooklyn Museum. From
bit.ly/2Uf8d3j ... 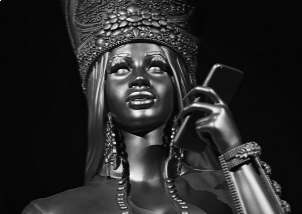 Our painting of the week is a spring still life with the Japanese
quince and pomegranate by Valentina Samoilik-Artyuschenko. From
bit.ly/2GgRdWK ... 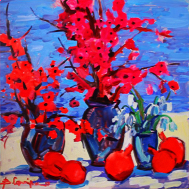 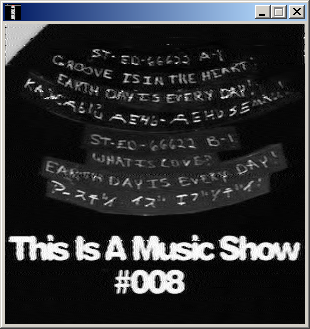