In the Netherlands, it's peak season for tulips and tourists.
Hoping that the latter do not trample the former ...


Welcome to program 97 of Shortwave Radiogram.

Last weekend, during the Sunday 0800 UTC broadcast, the excerpt
of Japanese text was decoded, at least partially, by some
listeners in Japan or via SDRs in Japan.

We will transmit Japanese text again this weekend, but this time
in MFSK16. MFSK16 is slower but more robust. Also, we will move
the center audio frequency up to 2000 Hz to escape any
interference from voice transmissions.

The RSID for MFSK16 will follow. If the RSID does not change your
decoding software's mode and center frequency, a 10-second tuning
signal will assist you in manually changing the mode and audio
frequency. MFSK16 requires precise tuning of the audio frequency.

This is Shortwave Radiogram in MFSK16 ...

We first covered California-based Alta Devices' solar cells being
used on UAVs in 2013, when they enabled a prototype solar-powered
version of AeroVironment's small Puma AE to stay aloft for over
nine hours. Now looking to give high altitude long endurance
(HALE) UAVs the ability to stay in the air for much, much longer
– even years at a time – the company has just released its
Anylight Solar for HALE product.

Built around Alta Devices' single junction gallium-arsenide solar
cells, which boast world-record efficiency of 29.1 percent,
combined with specialized packaging to withstand the conditions
found at altitudes of 20 km (60,000 ft) for extended periods,
Anylight Solar for HALE is intended for airplanes, airships,
and/or balloons flying at such altitudes.

The company says the specialized packaging it developed for the
product is lightweight and boasts a smooth, aerodynamic surface,
while providing protection from the extreme UV radiation, ozone
and temperatures found at high altitudes. Weight is obviously an
important factor for aircraft that need to stay aloft for
extended periods, yet still be able to carry their payload and
batteries to keep them operating through the night.

Working with potential customers, Alta Devices says the product
has also been designed to mechanically and electrically integrate
easily into various aircraft while providing maximum surface area
for the flexible solar cells. The company claims power output of
300 W/m2 (28 W/ft2) for the Anylight Solar for HALE product in
high altitude conditions.

HALE UAVs, which are also known as high altitude pseudo
satellites (HAPS), have a range of potential applications,
including as flying cell phone towers, for intelligence
surveillance and reconnaissance (ISR), search and rescue, border
patrol and mapping – all without the expense associated with
launching satellites into orbit. We've seen a number of
solar-powered HALE UAVs take to the air in recent years targeting
such applications, and with the release of Anylight Solar for
HALE that number only looks set to increase.

IARU already provided extensive input on the potential impact on
radio communications resulting from spurious emissions from WPT
devices, as detailed in CEPT ECC Report 289, published in
January. According to that report, given the planned density of
WPT systems for electric vehicles operating in the 79 – 90 kHz
range, it is calculated that there will be a widespread and
serious impact for the Amateur Service in the vicinity of WPT
systems, should spurious emissions, measured at 10 meters, be at
the current limits of ERC Recommendation 74-01.

At the Ankara meeting, IARU and other interested parties provided
further input. SE24 will meet again in early July to focus on WPT
issues.

Also at Ankara, IARU attended the Short-Range Devices Maintenance
Group meeting (SRD/MG), where it was noted that further work was
needed in SE24 before spurious emission limits for WPT devices
could be addressed in a regulatory sense. IARU was represented in
Ankara by IARU Region 1 President Don Beattie, G3BJ, who is
spearheading the IARU's work in this area.

The issue of WPT-EV is World Radiocommunication Conference 2019
(WRC-19) Agenda Item 9.1.6, for which studies are still under
way. Broadcasters, land mobile services, and others have also
expressed concern about spurious WPT-EV emissions. Further work
remains regarding generic WPT systems for such applications as
cell phone charging, power tools, and household appliances.

A Cygnus resupply mission to the International Space Station
(ISS) on April 11 also delivered three CubeSats of the BIRDS-3
constellation and three other CubeSats. The BIRDS-3 constellation
is a project of students at the Kyushu Institute of Technology.
The additional CubeSats include Swiatowid, KrakSat, and EntrySat.

All BIRDS-3 CubeSats are of the same design and have been
coordinated to operate on a common downlink frequency of 435.375
MHz. Each will transmit a CW beacon and 9.6 k GMSK telemetry. The
CubeSat deployer in the ISS Kibo module will deploy the BIRDS-3
CubeSats at a later date.

The BIRDS-3 constellation includes CubeSats from three countries:
They are Nepal's first satellite, NepaliSat-1; Uguisu from Japan,
and Sri Lanka's first satellite, Raavana-1. The primary mission
of the BIRDS constellation is to provide ciphered short messages
via its 435.375 MHz beacon, giving the opportunity for the
Amateur Radio community to decipher the messages using a publicly
available key on the BIRDS-3 website. Operators able to
successfully decipher the message will be recognized on the
BIRDS-3 website and receive a BIRDS-3 QSL card.

In addition to their primary mission, BIRDS-3 CubeSats will
conduct remote data collection based on low-powered LoRa
modulation to demonstrate remote data collection and processing
aboard a CubeSat to, for example, monitor water levels in
flood-prone areas. The LoRa remote station will operate at 433
MHz for Sri Lanka and Nepal and at 920 MHz for Japan. Data
collected will be posted on the BIRDS-3 website. Radio amateurs
contributing to receiving the processed data will receive a QSL
card showing the nature of data collected.

BIRDS-3 will also carry an imaging mission for public outreach
and awareness and Earth magnetic field measurement; a mission to
find commercial, off-the-shelf alternatives to expensive space
adhesives, and active attitude stabilization as a precursor to
active aiming control for future CubeSat missions.

Other CubeSats carried aloft on the same launch include:
Swiatowid, which will carry a V/U transponder, with an FM voice
uplink at 436.000 MHz and downlink at 145.850. Telemetry will be
transmitted on 435.500 MHz and at 2435.000 MHz; KrakSat, which
will transmit 9.6 k and 1.2 k telemetry at 435.500 MHz, and
EntrySat, a 3U CubeSat that will measure thermosphere parameters
during its orbital phase, and satellite re-entry during the
re-entry phase. It will carry an Amateur Radio FM relay with a
downlink of 436.950 (uplink not available) and 9.6 k packet.

-- Thanks to AMSAT News Service

A balanced sculpture is seen during the European Stone Stacking
Championships 2019 in Dunbar, Scotland. From bit.ly/2W2vBTG ...

An Emirati fisherman throws his net near Mirfa, near the coast of
the capital Abu Dhabi, UAE. From bit.ly/2vrZWix ... 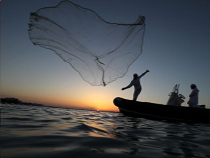 Blooming azaleas at the National Arboretum in Washington DC. From
wapo.st/2GGMwWz ...

This sidewalk scene in Washington DC shows why the pollen count
is so high in the spring. From wapo.st/2KOiSCU ... 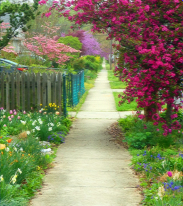 Only very early blooms as of 25 April at the Centennial Park
tulip garden in Holland, Michigan. But watch the Tulip Tracker at
bit.ly/2DyHSYG ...

This Egg Nebula was created by a dying star shedding its outer
layers. These kinds of nebulae exist in this state for only a few
thousand years. From bit.ly/2GwVJiU ... 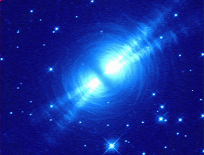 Our painting of the week is "Tokyo Night" by Sylvia Paul. From
bit.ly/2GFEMTk ... 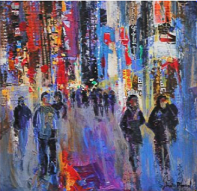