A topical cartoon by Michael P. Ramirez (with apologies to
Charles M. Schulz) ...

Welcome to program 102 of Shortwave Radiogram.

White House touts 'freedom gas' as next critical US export

The Department of Energy has said it wants to export
"molecules of US freedom" from a new liquefied natural gas
project to allies the world over. An official said it was
part of the White House's "America First" agenda.

The Trump administration has deemed liquefied natural gas, or
"freedom gas," a critical US export, saying it contains
"molecules of US freedom."

Earlier this week, the US Department of Energy announced the
approval of a liquefied natural gas (LNG) installation in Texas.
Undersecretary of Energy Mark Menezes said in a press release
that "increasing export capacity ... is critical to spreading
freedom gas throughout the world by giving America's allies a
diverse and affordable source of clean energy."

Steven Winberg, the assistant secretary for fossil energy who
signed the export order, said the announcement was part of the
White House's "America First" agenda.

"I am pleased that the Department of Energy is doing what it can
to promote an efficient regulatory system that allows for
molecules of US freedom to be exported to the world," Winberg
said.

The two Department of Energy employees appear to be building on a
metaphor coined by their boss, Energy Secretary Rick Perry,
earlier this month.

During his visit to Brussels a few weeks ago, Perry equated LNG
to US efforts to aid European liberation during World War II.

According to a report by the Euractiv media network, Perry said:
"The United States is again delivering a form of freedom to the
European continent. And rather than in the form of young American
soldiers, it's in the form of natural gas."

Perry agreed with a reporter who asked him if "freedom gas" was
an appropriate term.

The phrasing brings to mind other patriotic products like
"freedom fries" and "freedom toast," renamed in some American
eateries in reaction to French opposition to the US invasion of
Iraq in 2003.

Polar deserts in Canada's High Arctic are undergoing rapid
changes as increases in summer air temperatures lead to
permafrost thaw, leaving giant horseshoe-shaped pockmarks on the
barren terrain, according to a new study.

The research focuses on these horse-shaped landforms, also known
as thaw slumps, that develop when the ice within the permafrost
melts and the land slips down.

While thaw slumps are very common in the lower Arctic latitudes,
researchers had assumed the High Canadian Arctic, where average
annual ground and air temperatures are -16.5 C and -19.7 C,
respectively and the permafrost is over 500 metres deep, would be
more immune to the effects of warmer temperatures, said Melissa
Ward Jones, the study's lead author and a PhD candidate in
McGill's Department of Geography.

"For a long time we thought that areas that permafrost areas that
are closer to the thawing point… further south were the most
sensitive to change because they were closer to that zero degree
thawing point," Ward Jones said in a telephone interview from
Fairbanks, Alaska.

"But what my study is showing is that, no, these places aren't
immune to climate change."

Even a slight increase in summer temperatures is enough to
trigger a bigger permafrost thaw, she said.

Despite short Arctic summers, the thaw season, which lasts for
just 3-6 weeks a year, leads to the development and expansion of
slumps, which could have major implications for northern
infrastructure, Ward Jones said.

"I think it's a wakeup call that change is happening in these
areas that are really far north," Ward Jones said.

There has been a widespread development of retrogressive thaw
slumps in high Arctic polar deserts over a short period,
particularly during the unusually warm summers of 2011, 2012 and
2015, the research shows.

"When we see these widespread increases, these large jumps in
numbers going from 100 active slumps to over 200 active slumps,
that means something is going on bigger regional scale, so we're
linking this with increases in summer temperatures," Ward Jones
said.

This happens because the terrain in Canada's Arctic polar deserts
has very little vegetation and organic cover to insulate it from
increased summer temperatures, Ward Jones said.

"Where we are on Ellesmere Island permafrost is more in
equilibrium with climate, so any increase in summer temperatures
if you reach a new maximum summer temperatures, you're going to
have an increase in your thaw depth – the layer of soil at the
surface that goes above zero every summer – and if you have
ice-rich permafrost, which we do have in these areas, the ice
within the permafrost is going to melt," she said.

Wayne Pollard, a professor in McGill's Department of Geography
and co-author on the study, said their research clearly
demonstrates the complex nature of ice-rich permafrost systems
and climate-permafrost interaction.

"Furthermore, it raises concerns about the over simplification of
some studies that generalize about the links between global
warming and permafrost degradation," Pollard said in a statement.

TAIPEI - Electric vehicles have struggled to gain mass appeal in
much of the world despite the fanfare surrounding Tesla Motors,
the world's best-selling brand of plug-in cars last year. Drivers
worry about prices, comfort and what happens when a battery
expires in the middle of a trip.

But in Taiwan, scooter vendor Gogoro doubles its sales every year
largely because of a widespread battery exchange network
supported by a central government that's keen to control
emissions. Gogoro designs what it describes as ride-able scooters
as well as engines for other brands, filling what the chief
executive officer calls earlier market voids.

"People say we're the two wheels of Tesla, and in some ways, we
are," CEO and co-founder Horace Luke said. "We do a little bit of
everything."

The company, which launched in 2011, first had to prove that it
could all be done.

"Nobody could believe that an electric vehicle could be cool and
fun to ride, so we built that," said Horace Luke, founder of
Gogoro. "Nobody believed that you could swap batteries, so we
enabled that."

Gogoro stands out among other electric scooter developers by
working with Taiwan's central government plus the city of Taipei
to locate and pay for 1,300 battery swap stations. Those
alleviate rider fears of running out of juice in mid-trip, a
barrier to development of the world's $17.43 billion electric
vehicle industry.

Battery swap sites are placed every 500 meters in urban Taiwan,
usually in obvious roadside locations. They turn up every two to
five kilometers in other parts of the island. The central
government pays half the cost of building the swap stations and
offers publicly accessible land, Luke said. The government's
National Development Fund invested venture capital in Gogoro in
2014.

"You should have seen how hard it was for first 50 stations; it
was almost impossible," recalled Luke, 49, a Seattle native and
former software designer who moved to Taiwan for the engineering
talent and supply chain. He co-founded Gogoro in 2011.

"And our consumers are the ones voicing out. They go to the
government and say 'I want this here'," he said.

Taiwan's Environmental Protection Administration has set a goal
of cutting greenhouse gas emissions 10 percent from 2005 levels
by 2025 and hacking them by 20 by 2030.

For the government now, Luke added, "it's a win-win situation for
them to adopt electric."

Gogoro's stations do 90,000 swaps per day. Those transactions
give Gogoro the data it needs to know where it should resupply
batteries.

Worldwide, just "a handful" of countries have "significant market
share" of electric cars, the independent, intergovernmental
International Energy Agency says. Norway led in 2017 with 39
percent of new sales in 2017, followed by Iceland at 11.7 percent
and Sweden at 6.3 percent.

Taiwanese still want to know more about their next battery, said
Paul Hsu, co-founder of Okgo.life, a fellow Taiwanese electric
scooter brand with an app that lists types and prices of
batteries at the swap sites on its roster.

"Every rider has a plan for every trip. The riders know where
they're going but not how much money it will take to get there,"
Hsu said. For example, he said, "a short trip should have a
short-distance vehicle and a short-distance price."

Gogoro has raised its sales as well by designing scooter models
attractive to men who like bigger motorcycles along as well as
vehicles aimed at female riders. Sales doubled last year and
they're on track to double again this year, Luke said.

Taiwanese adapted especially fast because of the earlier
prevalence of gas-powered scooters. Riders were comfortable with
the idea of scooters in general – just not the noise and
pollution they kick up.

Tsai Cheng-yang, 36, an urban designer of the southern Taiwan
city Tainan, has five electric scooters in his household.
Compared to gas-powered scooters, he said, electric ones a
quieter, give off less heat and lack the stench of fuel, he said.
Operation costs are about the same, he said.

"If all vehicles were an electric powered, you'd feel it was
quite peaceful, with no odors either, quite happy and a different
experience," Tsai said.

Gogoro plans to overcome competitors such as Yamaha and Aeon by
selling motors to them, giving it a cross-brand presence, Luke
said. "The idea is to create a platform allowing others to create
their own vehicles," he said. 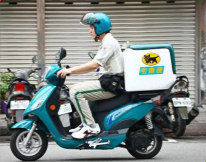 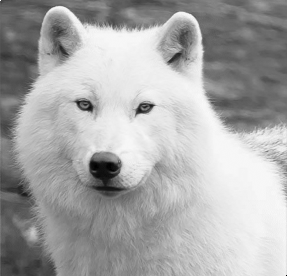 The sun goes down behind the nest of a pair of white storks with
their young near Laatzen, Germany, May 23. From
bit.ly/2XdWggI ... 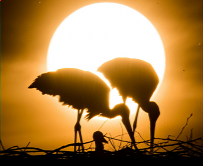 A little lion roars beside its mother at the zoo in Erfurt,
Germany. From bit.ly/2HMaekS ...

One of 24 goats released into Manhattan's Riverside Park as
"summer interns" to feast on invasive plants. From bit.ly/2Z4rzvd
... 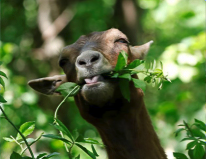 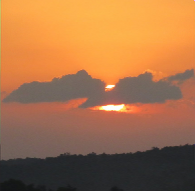 Our painting of the week is "Luminous Char" (2008) by Inuit
artist Kenojuak Ashevak. From bit.ly/2EIDRBr ...