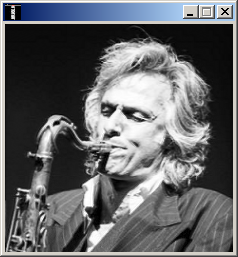 The Chris White sax solo on "Your Latest Trick" ...


Welcome to program 108 of Shortwave Radiogram.

Some think automated radio emails are mucking up the spectrum
reserved for amateur radio, while others say these new offerings
provide a useful service

Like many amateur radio fans his age, Ron Kolarik [K0IDT], 71,
still recalls the "pure magic" of his first ham experience nearly
60 years ago. Lately, though, encrypted messages have begun to
infiltrate the amateur bands in ways that he says are
antithetical to the spirit of this beloved hobby.

So Kolarik filed a petition, RM-11831, to the U.S. Federal
Communications Commission (FCC) proposing a rule change to
"Reduce Interference and Add Transparency to Digital Data
Communications." And as the proposal makes its way through the
FCC’s process, it has stirred up heated debate that goes straight
to the heart of what ham radio is, and ought to be.

The core questions: Should amateur radio—and its precious
spectrum—be protected purely as a hobby, or is it a utility that
delivers data traffic? Or is it both? And who gets to decide?

Read her article at
https://spectrum.ieee.org/tech-talk/telecom/wireless/is-ham-radio-a-hobby-a-utilityor-both-a-battle-over-spectrum-heats-up

NASA engineers are conducting an extremely long-range
reconfiguring of the space agency's two 42-year-old Voyager
deep-space probes to extend their service lives. By cutting back
and reallocating heating resources and bringing back online
thrusters that haven't been used in decades, the goal is to keep
the unmanned spacecraft sending back data from the frontiers of
the solar system for several more years.

Launched separately in 1977, the Voyager 1 and 2 missions are not
just a spectacular success in the annals of deep-space
exploration, but an ongoing one. As they flew on slingshot
trajectories that are sending them out of the solar system, never
to return, they sent back spectacular images of Jupiter, Saturn,
Uranus, and Neptune, and are currently returning instrument data
as they pass into interstellar space.

Unfortunately, after more than four decades in service, the two
probes are showing their age. According to NASA, they are the
oldest operating non-passive spacecraft and now they are
suffering from the encroaching cold 11 billion miles (18 billion
km) from the Sun as their nuclear power plants run down. Too
distant to use solar panels, the Voyager craft rely on
radiothermal generators (RTGs) that derive power from decaying
plugs of plutonium-238 fuel.

These generators allow the Voyagers to not only run their
instruments, but also keep the vulnerable electronics from
becoming too cold to operate. The RTGs lose four watts per year
and are now running at only 60 percent of their original output.
This means that they are expected to fail sometime around 2025.

To ensure that the spacecraft continue to work while power is
available, NASA engineers are now deciding which instruments to
take heating rations away from to give to others. This is
particularly important for Voyager 2, which has an additional
instrument drawing power. The Cosmic Ray Subsystem (CRS)
subsystem measures the charged particles that bombard the
spacecraft, but now its heater is being switched off.

NASA says that this is the first of a series of instrument
shutdowns with more to follow in the next few years. Meanwhile,
other cosmic ray, plasma, magnetometer, and low-energy charged
particle instruments will continue to collect data.

In addition, the space agency has determined that Voyager 2's
attitude thrusters have begun to degrade. A similar problem was
seen with Voyager 1 in 2017 and, like with Voyager 1, Voyager 2
has been ordered to bring back online a second set of thrusters
that have not been used since its 1989 flyby of Neptune.

"It's incredible that Voyagers' instruments have proved so
hardy," says Voyager Project Manager Suzanne Dodd at NASA's Jet
Propulsion Laboratory in Pasadena, California. "We're proud
they've withstood the test of time. The long lifetimes of the
spacecraft mean we're dealing with scenarios we never thought
we'd encounter. We will continue to explore every option we have
in order to keep the Voyagers doing the best science possible."


Where German is still spoken in the US

Over 300 years ago, German immigrants crossed the Atlantic
to reach, among other places, Pennsylvania. Their language
and culture continues to influence their descendants, as DW
correspondent Oliver Sallet discovered.

When Norman Sunday sits in front of his barn, he sometimes finds
himself looking wistfully over his property. The 82-year-old
farmer from the northeastern state of Pennsylvania knows that a
decades-old family tradition is coming to an end. He once bred
cattle here, but he's retired now and knows his children are
unlikely to follow in his footsteps.

Like many in Berk County, Sunday is the descendant of German
immigrants who came from the Palatinate region of southwest
Germany in the 18th century to find a new home. They were farmers
who worked hard, believed in God, and cultivated their German
culture.

While the farmer himself has never been to Germany, his parents
spoke Pennsilfaanisch Deitsch ("Pennsylvania Dutch"), a German
dialect spoken by the rural population for 300 years that is
still alive today. "Ich kann's ned gud schwätze, aber ich
verstehe" ("I can't speak it well, but I can understand it"),
said Sunday in the local dialect.

German dialect born in the USA

Patrick Donmoyer of the University of Pennsylvania wants to
preserve this German heritage for future generations. At the
German Cultural Heritage Center in Kutztown in Berks County, he
teaches Pennsylvania Deitsch in a former German school from 1870
that is now a museum.

On an old school slate board in the cultural center, one can see
"deitsche Sprichwadde" (German adages) written down such as
"Schpaar die Geld" ("saving money"), and the unusual phrase "gut
gwetzt ist halwer gmeht" ("well-sharpened is half mown"), which
literally refers to the mowing of fields with a scyth.

The language is not at risk of extinction, says Donmoyer. Around
40,000 people speak the dialect in Pennsylvania alone, and around
400,000 across America. The number is rising since many Amish and
Mennonites faith communities who speak Pennsylvania German as
their mother tongue traditionally have large families.

Some 30% of Pennsylvanians have German ancestors, and many of the
descendants still speak some form of German at home. Donmoyer
says a Pennsylvanian German dialect has developed into its own
language across 300 years.

'Barn stars' from the old country

Another German cultural import that is still typical across
Pennsylvania and beyond is the famous "barn star" or "hex sign"
seen fixed to farmhouses and barns. Ranging from decorative
five-pointed stars to colorfully painted twelve-point compasses,
the signature emblems were brought across the Atlantic by the
Palatinate immigrants and have developed into a distinct regional
art form.

At the Kutztown Folk Festival, Donmoyer demonstrates how to paint
the barn stars. Contrasting colors like yellow and black give the
impression that the stars are turning, he says. The emblems
should not be mixed up with pagan symbols, he adds, noting that
the sun, moon and stars have always played an important role for
people on the land. These Pennsylvania Germans simply continued
to draw what was important to them.

The popular Kutztown Folk Festival attracts 130,000 annual
visitors who come to experience the lifestyles of German
immigrants who have shaped Berks County to this day. In the
Wursthaus, one can get their fill of German-style Pennsylvanian
sausages with sauerkraut, while a brass band plays music that
would not be out of place in the southern German state of
Bavaria.

The band's trumpet player, Leon Moll, regularly spoke
Pennsylvania Deitsch with his parents as a child. Since their
death, however, he rarely speaks the language, while his children
"tun es nid mehr schwätze" ("don't speak it anymore"), he
explains. For many, it is only during the nine days of the annual
festival that their old country customs come to life. 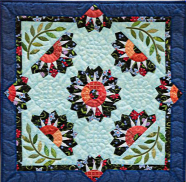 Fishing on a hot and muggy day near Buffalo, New York. From
bit.ly/2NPdalL ... 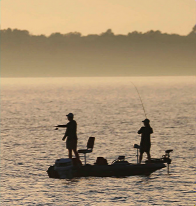 An example of the underwater photography of Raffaele Livornese.
From bit.ly/2NNJCVG ...

From CNN's "Germany's 30 most beautiful places," the arched
Rakotz bridge in Gablenz, Saxony. From cnn.it/2xG4GCB ... 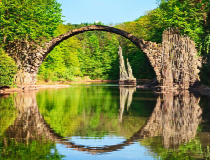 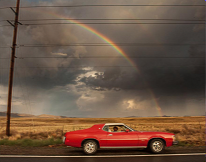 A motorcyle on the outskirts of Frankfurt on 4 July. From
bit.ly/2LgHBip ... 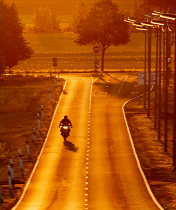 Our painting of the week in "Dreaming of Summer" by Mary Chaplin.
From bit.ly/2XZB9lV ... 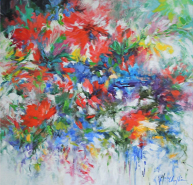