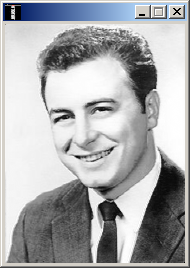 
Welcome to program 113 of Shortwave Radiogram.

Viewers of the various "extreme angling" TV shows have likely
already heard that it's getting more and more difficult to find
big fish in the world's lakes and rivers. A new international
study, however, now confirms that there has recently been a
drastic decline in populations of large freshwater animals.

Led by scientists from Germany's Leibniz-Institute of Freshwater
Ecology and Inland Fisheries, the study looked at data relating
to global populations of freshwater megafauna, gathered worldwide
between 1970 and 2012. The 126 species that were counted within
that period included 30-kg-plus (66-lb) animals such as river
dolphins, beavers, crocodiles, giant turtles and sturgeons.

Overall, it was found that freshwater megafauna populations
declined by a shocking 88 percent throughout the 42-year time
span. This was twice as high as the loss of vertebrate
populations on land or in the sea during the same period.

Regionally, the numbers were highest in the Indomalaya
biogeographic realm (South and Southeast Asia, and southern
China) and the Palearctic realm (Europe, North Africa and most of
Asia), at 99 and 97 percent respectively. As far as the worst-hit
species go, there was a 94-percent decline in large fish such as
sturgeons, salmonids (salmon, trout, char, etc) and giant
catfishes, followed by a 72-percent decrease in aquatic reptiles.

The biggest culprit in the loss appears to be overexploitation,
as the animals were killed for their meat, skin, or fur (or their
eggs were harvested) faster than they could reproduce.
Additionally, the ever-increasing damming of rivers played a
large role, keeping species from reaching their feeding and
spawning grounds.

It was also noted, however, that conservation efforts in recent
years have led to the stabilization or even increase of 13
megafauna species. These have included the green sturgeon and
American beaver in the US, and the Irrawaddy river dolphin in
Asia's Mekong basin. Additionally, although political differences
between bordering countries have made conservation difficult in
Europe, the Eurasian beaver has been reintroduced to regions
where it was once found, while efforts are also underway to
reintroduce two species of sturgeon.

A paper on the study, which was recently published in the journal
Global Change Biology, suggests that further conservation efforts
are very much needed.

Images sent back by ESA's Rosetta comet probe show that it wasn't
only thing orbiting comet 67P/Churyumov-Gerasimenko (67P/C-G). A
comparison of images taken four years ago when the comet was
closest to the Sun shows a piece of debris about 4 m (13 ft) in
diameter circling 67P/C-G like a mini-moon.

Though the Rosetta mission ended on September 30, 2016, the
massive treasure trove of data sent back by the unmanned
deep-space explorer is still paying dividends – some of them
quite unexpected. A case in point is a series of images taken by
the spacecraft as it neared 67P/C-G in late July and August 2015.

At this time, the comet was at perihelion, or the point in its
orbit when it comes closest to the Sun. It's also when a comet is
most active as the sunlight heats up the interior, causing the
subsurface ice to flash into gas that jets out, carrying with it
clouds of dust and debris. It's a time when the comet is
literally boiling away, so it's not surprising when larger chunks
get mixed up in the dust motes.

It was one of these chunks that was spied earlier this year by
Spanish astrophotographer Jacint Roger when he was going through
the Rosetta image archives – specifically, images taken by the
spacecraft's OSIRIS narrow-angle camera on October 21, 2015 when
it was 400 km (250 mi) from 67P/C-G. When he converted some of
these into an animated GIF, he saw an object orbiting the comet.

According to ESA, the mini-moon, unofficially named "Churymoon"
by researcher Julia Marín-Yaseli de la Parra, is now being
studied in more detail. Computer models suggest that the object
was ejected from 67P/C-G and spent its first 12 hours of
independence orbiting at a distance of between 2.4 and 3.9 km
(1.5 and 2.4 mi) from the comet's center. It then passed through
the coma, which made it hard to see, but was later seen on the
opposite side, indicating that it was, indeed, orbiting the comet
until around October 23, 2015.

Though other bits of debris have been seen in the vicinity of
67P/C-G, ESA says that this is the largest one yet found and will
be the subject of further study.

The Rosetta mission lifted off atop an Ariane 5 rocket on March
2, 2004 at the Guiana Space Centre in French Guiana. It arrived
at 67P/C-G on August 6, 2014 and was the first mission to escort
and orbit a comet as it approached the Sun on a highly elliptical
orbit. After two years of studying 67P/C-G, which included the
releasing of a small lander, the mission was terminated when the
orbiter ran out of propellant and it was ordered to set down on
the comet in a controlled landing before deactivating itself.


Image: Churyumov-Gerasimenko with its temporary moon (circled and
probably not visible) ... 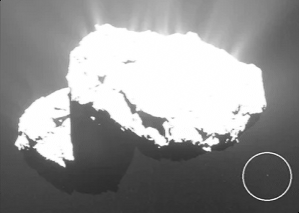 NASA's steam-propelled CubeSats control one another in space

CubeSats are tiny spacecraft with huge potential, but their small
stature doesn't lend itself to typical propulsion methods. This
has led scientists to get creative in working out ways of
shifting them through space, including harnessing photons from
the Sun and using regular ol' H20 as a propellant. NASA's OCSD
mission has now leaned on the latter to pull off a
first-of-a-kind maneuver between two of its CubeSats in low-Earth
orbit.

Steam-based propulsion has been around for thousands of years in
various forms, but is a particularly appealing option when it
comes to today's tiny spacecraft. For one, water doesn't contain
any volatile chemicals, therefore avoiding explosion risks at
launch. It also has a low molecular weight and can be turned to
vapor relatively easily.

And a few research groups are working on technologies for
CubeSats that would harness water for propulsion through space.
One prototype CubeSat from Purdue University back in 2017 was a
particularly promising example, with its four onboard thrusters
requiring just a few teaspoons of water for propulsion.

Since it entered low-Earth orbit in December of 2017, NASA's OCSD
(Operations and Data Transmission Optical Communications and
Sensor Demonstration), has been testing this out in space, among
other things. The project involves three tiny CubeSats and at one
point, the water-based propulsion systems have been used to bring
a pair of them to within 20 ft (6 m) of one another.

They do this by taking water from their fuel tanks, warming it to
produce steam and expelling it in short bursts to shift the
vehicle's position in space. But the primary motivation for the
mission isn't to actually demonstrate this propulsion system for
CubeSats, but to explore new optical transmission methods that
can relay data back to Earth more efficiently. Part of this
involves exploring how swarms of small spacecraft can work
together for such purposes when in close proximity to one
another.

To that end, the team uses GPS receivers, optical proximity
sensors and laser rangefinders to track the position of the
spacecraft in space. They were around 5.5 mi (8.85 km) apart when
the pair of CubeSats engaged one another via radio link. One of
the tissue-box-sized spacecraft then issued a command to its
partner to fire up its thruster and come into closer proximity,
which it duly obeyed.

While this was choreographed by human operators ahead of time,
NASA says it marks the first coordinated maneuver between two
CubeSats in low-Earth orbit, with one issuing the command to
another, and starts to demonstrate the potential of fleets of
CubeSats to work cooperatively.

"The OCSD team is very pleased to continue demonstrating new
technical capabilities as part of this extended mission, over 1.5
years after deployment," says Darren Rowen, director of the Small
Satellite Department at The Aerospace Corporation. "It is
exciting to think about the possibilities enabled with respect to
deep space, autonomously organizing swarms of small spacecraft." 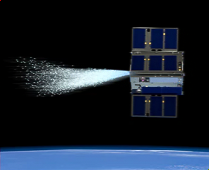 Cleome at dusk in West Philadelphia. From bit.ly/2N63vVF

More lightning this past week in Washington DC, this time with
the Washington Monument and Reflecting Pool in the picture. From
wapo.st/2yZJrMx ... 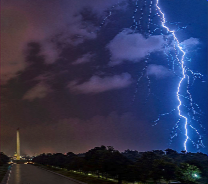 One of 130 murals commissioned in Jersey City, New Jersey, since
2013 to discourage graffiti. From bit.ly/2Z5cVXY ... 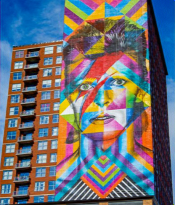 Someone has been leaving old-style CRT television sets on the
doorsteps of homes in Henrico County, Virginia. And the
prankster has a CRT head. See wapo.st/2P5rB5U ...

Detail of a light and mirror artwork by artist Anthony James, on
display during the Seattle Art Fair at CenturyLink Field on
August 04, 2019, in Seattle, Washington. bit.ly/2YXdrat 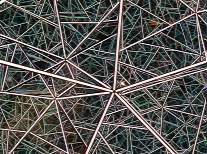