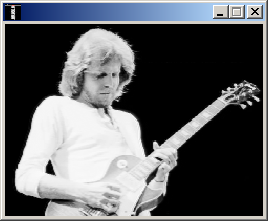 Welcome to program 118 of Shortwave Radiogram.

Researchers at the University of Illinois at Urbana-Champaign
have replicated one of the most well-known electromagnetic
effects in physics, the Hall Effect, using radio waves (photons)
instead of electric current (electrons). Their technique could be
used to create advanced communication systems that boost signal
transmission in one direction while simultaneously absorbing
signals going in the opposite direction.

The Hall Effect, discovered in 1879 by Edwin Hall, occurs because
of the interaction between charged particles and electromagnetic
fields. In an electric field, negatively charged particles
(electrons) experience a force opposite to the direction of the
field. In a magnetic field, moving electrons experience a force
in the direction perpendicular to both their motion and the
magnetic field. These two forces combine in the Hall Effect,
where perpendicular electric and magnetic fields combine to
generate an electric current. Light isn't charged, so regular
electric and magnetic fields can't be used to generate an
analogous "current of light." However, in a recent paper
published in Physical Review Letters, researchers have done
exactly this with the help of what they call "synthetic electric
and magnetic fields."

Principal investigator Gaurav Bahl's research group has been
working on several methods to improve radio and optical data
transmission as well as fiber optic communication. Earlier this
year, the group exploited an interaction between light and sound
waves to suppress the scattering of light from material defects
and published its results in Optica. In 2018, team member
Christopher Peterson was the lead author in a Science Advances
paper which explained a technology that promises to halve the
bandwidth needed for communications by allowing an antenna to
send and receive signals on the same frequency simultaneously
through a process called nonreciprocal coupling.

In the current study, Peterson has provided another promising
method to directionally control data transmission using a
principle similar to the Hall Effect. Instead of an electric
current, the team generated a "current of light" by creating
synthetic electric and magnetic fields, which affect light the
same way the normal fields affect electrons. Unlike conventional
electric and magnetic fields, these synthetic fields are created
by varying the structure that light propagates through in both
space and time.

"Although radio waves not carry charge and therefore do not
experience forces from electric or magnetic fields, physicists
have known for several years that equivalent forces can be
produced by confining light in structures that vary in space or
time," Peterson explained. "The rate of change of the structure
in time is effectively proportional to the electric field, and
the rate of change in space is proportional to the magnetic
field. While these synthetic fields were previously considered
separately, we showed that their combination affects photons in
the same way that it affects electrons."

By creating a specially designed circuit to enhance the
interaction between these synthetic fields and radio waves, the
team leveraged the principle of the Hall Effect to boost radio
signals going in one direction, increasing their strength, while
also stopping and absorbing signals going in the other direction.
Their experiments showed that with the right combination of
synthetic fields, signals can be transmitted through the circuit
more than 1000-times as effectively in one direction than in the
opposite direction. Their research could be used to produce new
devices that protect sources of radio waves from potentially
harmful interference, or that help ensure sensitive quantum
mechanical measurements are accurate. The team is also working on
experiments that extend the concept to other kinds of waves,
including light and mechanical vibrations, as they look to
establish a new class of devices based on applying the Hall
Effect outside of its original domain.


From the University of Colorado Boulder:

Early one morning in late August 2019, Colorado photographer
Glenn Randall hiked several miles to a stream flowing into Lake
Isabelle in the Indian Peaks Wilderness. He set up his camera
near the stream and began photographing about 20 minutes before
sunrise when a golden glow developed at the horizon.

It wasn't until Randall was back at home, however, that he
noticed something odd: The sky above the golden glow and its
reflection in the water were both a deep violet.

"I was editing the photos and thought, 'Wow, that water is
purple,'" Randall said.

He's not alone. Photographers across the country have noticed
that sunrises and sunsets have become unusually purple this
summer and early fall.

Now, researchers at CU Boulder have collected new measurements
that help to reveal the cause of those colorful displays: an
eruption that occurred thousands of miles away on a Russian
volcano called Raikoke.

Around the same time that Randall was taking his photos, the team
of atmospheric scientists used a high-altitude balloon to detect
particles created by that eruption in Earth's stratosphere. These
particles, or aerosols, scatter sunlight as it passes through the
air, which in combination with the absorption of light by the
ozone layer, gives sunrises and sunsets that purple tint.

There's no cause for concern, said Lars Kalnajs, who led the
balloon team. But the purple skies show that even
seemingly-isolated volcanic eruptions can have global
consequences.

"A really big eruption would have a major impact on humanity, so
it's something we need to be ready for," said Kalnajs, a research
associate in the Laboratory for Atmospheric and Space Physics
(LASP).

The year without summer

Such big eruptions have happened before. In 1815, for example,
Mount Tambora in modern-day Indonesia ejected a historic volume
of ash and sulfur dioxide high into the air. The plume lingered
in the atmosphere, shading the planet and disrupting weather
around the world.

"The year after in history is known as the year without summer,"
said Kalnajs, also of the Department of Atmospheric and Oceanic
Sciences. "There were crop failures all over the world, and there
was ice in rivers in Pennsylvania that didn't melt until June."

It's the sort of disaster that he and his colleagues from NASA,
the U.S. National Oceanic and Atmospheric Administration and
several European institutes are ready for.

The team relies on high-altitude balloons, which can soar to more
than 20 miles above the ground, to measure natural aerosols and
occasional biproducts of volcanic eruptions in the atmosphere.

"It's really important when major eruptions happen that we get
data quickly," Kalnajs said. "We need to figure out if this is
going to be the kind of thing that impacts hundreds of thousands
of people around the world, or is going to be to be more minor?"

Raikoke gave them a good test for their skills. The volcano,
which sits in the Kuril Islands off the eastern coast of Russia,
erupted on June 22, 2019. Early data from NASA suggested that the
explosion injected sulfur dioxide gas, which can lead to the
formation of aerosols, into Earth's stratosphere—a layer of the
atmosphere that begins about 7.5 miles above the surface.

Kalnajs and his colleagues wanted to see if they could find hints
of that eruption in the stratosphere. In August, the team
released a balloon near Laramie, Wyoming, and hit paydirt.

Based on the group's preliminary data, which it will publish
later this year, some aerosol layers in the stratosphere were 20
times thicker than normal in the wake of the eruption.

"It makes you realize that you don't have to put a whole lot of
aerosols into the stratosphere to change its composition,"
Kalnajs said. "This was a relatively small volcanic eruption, but
it was enough to impact most of the northern hemisphere."

It could also explain why, at the same time, observers with keen
eyes like Randall—whose wife, Cora, is a professor in atmospheric
and oceanic sciences at CU Boulder—were noticing purple skies
across the U.S. Such light displays likely haven't been seen
since 1991 when Mount Pinatubo in the Philippines erupted in
1991.

Kalnajs noted that the effect won't last for long and is subtle.
You'll need the right weather conditions and a bit of luck to
spot the phenomenon. But, he said, it's a reminder that
scientists will need to keep an eye out for the next Mount
Tambora.

"It will happen at some point, whether that's in one year, five
years or 100 years," Kalnajs said. 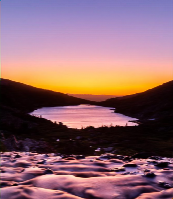 Australian photographer Michael Marsten caught this image of a
"rainbow" behind a Qatar jet. This happens when the ice crystals
formed behind a high-flying aircraft are aligned at just the
right angle with the sun. From bit.ly/2ksWZN4 ...

Last weekend's full moon over the Bismarck Sea. From
bit.ly/2kRZdpo ...

Sand under a microscope. From bit.ly/2kosuaV ... 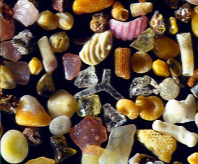 An imitating poison dart frog. "When tadpoles hatch, they need to
be transported to water. Imitating dart frog dads do this one by
one!" From bit.ly/2mlKzHf ... 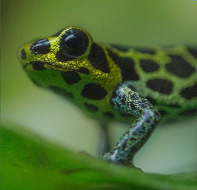 The Hubble Space Telescope captured a fresh portrait of Saturn
while it was near the closest point to Earth. This is one of the
most detailed views of Saturn available since the termination of
the Cassini mission in 2017.

Our painting of the week is "Late Summer Meditation" by Dana
Levine. From bit.ly/2kmuNeA ... 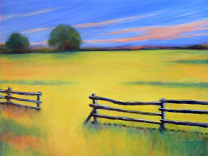 Blog post about the JOOK listening site (in Japanese):
http://www.kyoto-inf.com/2019/01/09/posted-yase_rajioto/