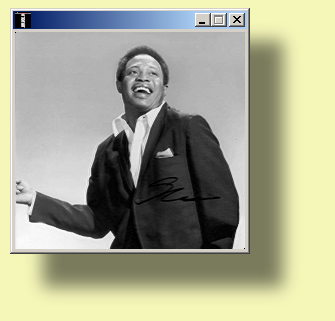 Welcome to program 121 of Shortwave Radiogram.

After several initial failures, a giant floating boom designed to
collect trash from the ocean is finally working.

The Ocean Cleanup Project, created by a 25-year-old Dutch
university dropout, has begun collecting items ranging in size
from as large as commercial fishing nets to as small as 1
millimeter pieces of plastic from the area known as the Great
Pacific Garbage Patch located halfway between California and
Hawaii.

The 600-meter-long free-floating boom has a tapered 3-meter-deep
screen that acts like a coastline to trap the estimated 1.8
trillion pieces of plastic that form the patch, while allowing
marine life to swim under it.

An underwater parachute anchor was added to the boom after it
failed to trap any trash in the sea last year. The anchor slowed
down the boom to allow it to passively catch the trash while
moving with the currents.

Using sensors and satellites, the boom communicates with
scientists to let them know when it is time to send out a boat to
pick up the collected trash for recycling.

The environmental nonprofit Ocean Conservancy estimates between
600,000 and 800,000 metric tons of fishing gear is abandoned or
lost in the oceans every year. Another 8 million metric tons of
plastic trash such as bottles, bags and toys flow annually into
the ocean from beaches, rivers and creeks.

Slat said the next move will be to design a bigger, stronger boom
that will be able to collect trash for a year or more before a
ship is sent out to empty it.

"There's a lot of work still ahead of us," he said.


Image: An increase in the size of the cork line now allows Ocean
Cleanup to capture large and small debris ... 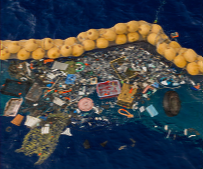 Into the great unknown: The Soviet Union's secretive Venera 7
probe

As our next-door neighbor and the focus of science fiction
writers imagining a world beneath the cloud tops brimming with
jungles, oceans and dinosaurs, Venus held a certain allure for
astronomers throughout the 20th century. When American probes
began skimming past the planet during the early stages of the
space race, they quickly put to rest any hopes of an inhabitable
environment, but this did little to deter a secretive Soviet
ambition to get up close and personal with the second planet from
the Sun.

Venera, (Russian for Venus), was the name given to the series of
space probes the Soviet Union built between 1961 and 1984 to
study Venus, both its surface environment and atmosphere. This
meant some were designed to observe it from afar and some were
designed to land on the planet’s surface, a feat that had never
been accomplished at the program’s outset.

Venera 1VA was the Soviets Union’s first attempt to visit Venus
in 1961 and failed to leave Earth orbit, though the world was not
to know that at the time. The country’s preference was to keep
its space exploits in-house until they amounted to success, and
so the failed Venera 1A mission was publicly given the name of
“Heavy Sputnik,” an apparent successor to the world’s first
artificial satellite famously launched in 1957.

While the probes to immediately follow the doomed Venera 1A are
believed to have actually reached Venus, their telemetry failed
long before then. It wasn’t until 1967 and the launch of Venera 4
that the Soviet Union began to reap some reward for its efforts.
That probe became the first spacecraft to relay data back to
Earth from another planet’s atmosphere, before it crumbled under
the intense pressures on Venus’ surface soon after.

A couple more atmospheric probes would follow, until the Soviets
got serious about building a spacecraft to withstand the harsh
realities of life on Venus. This meant engineering a machine to
endure pressures of 180 atmospheres and temperatures of 540° C
(1,004° F).

Venera 7 was constructed as a single spherical shell using
titanium and lined with shock-absorbing materials. This, the
Soviets hoped, would enable the lander to survive the landing and
remain on Venus, from where it could continue to relay new
information about its surroundings.

Weighing 490 kg (1,080 lb), the probe was a sizeable one for the
time and was actually launched alongside an identical aircraft in
August 1970, the Kosmos 359, which didn’t make it beyond Earth
orbit. Venera 7, however, successfully reached its target planet
four months later, thanks to a couple of course corrections along
the way.

Slipping into the nightside atmosphere on December 15 of that
year, Venera 7 deployed its 2.5-sq-m (26.9-sq-ft) parachute at an
altitude of 60 km (37 mi) with the intention of drifting safely
down to the surface. Six minutes in, the parachute ripped.
Twenty-nine minutes later, the probe smashed into the surface of
Venus at a speed of around 60 km/h (37.3 mph), which was not part
of the plan, but not entirely fatal to the mission either.

Venera 7 managed to survive this impact, and to even relay a
full-strength signal for one second before failure. But computer
processing of the radio signals at a later date revealed that the
toppled-over Venera 7 probe continued to transmit a weak signal
for a full 23 minutes after impact. Data revealed a temperature
of around 475° C (878° F) at the surface, along with a pressure
of 92 bar and wind speeds of 2.5 meters per second (5.6 mph).

This was the first time a spacecraft had ever transmitted data
back to Earth from another planet, a momentous achievement but
just a harbinger of scientific discovery on part of the Soviet
Union’s Venera probes. In 1975, during a 53-minute transmission,
Venera 9 sent back the first ever pictures of another planet’s
surface, stunning scientists with its abundance of sharp-edged
rock formations.

“Even the moon does not have such rocks,” Soviet scientist Boris
V. Nepoklonov said in an interview with local broadsheet
newspaper Izvestia in response to the imagery. “We thought there
couldn't be rocks on Venus, they would all be annihilated by
erosion, but here they are, with edges absolutely not blunted.
This picture makes us reconsider all our concepts of Venus.”

In 1982, Venera 13 joined the party and would perhaps return the
biggest scientific loot of the Venera probes. This included
panoramic photographs and the first ever color photos of another
planet’s surface. It also drilled into the surface and analyzed
the soil inside an airlock using an X-ray fluorescence
spectrometer.

Three more probes were launched as part of the Venera program
until it wrapped up in 1984, including a final pair of orbiting
spacecraft to map the surface. Other spacecraft from different
agencies have since flown by and orbited Venus for various
purposes, but we haven’t been back to the surface since.


Image: A 1968 stamp from the Soviet Union depicting the Venera 4
probe in transit ... 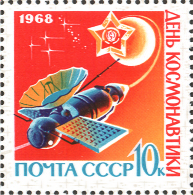 
India's Chandrayaan-2 lunar lander crashed, but its orbiting
spacecraft continues to provide detailed images of the lunar
surface. From bit.ly/2pZSOup ... 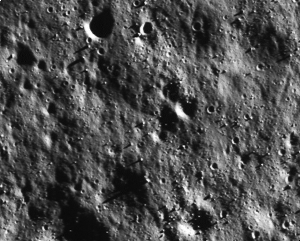 The Studebaker Fountain, first installed in South Bend, Indiana,
in 1906, has been restored with modern lighting effects. From
studebakerfountain.org ... 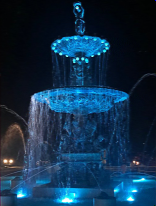 From a Deutsche Welle pictorial on the top ten landmarks in
Berlin: the Berlin television tower, opened by GDR authorities in
1969. From bit.ly/2OBUk0e ... 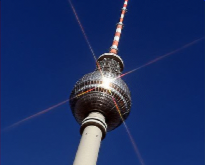 A man carrying an umbrella is seen through a window covered with
rain drops in Colombo, Sri Lanka. From bit.ly/2VC7Ylu ...

A firefighter battles a forest blaze at Pekanbaru, Indonesia.
From bit.ly/2olBvnl ... 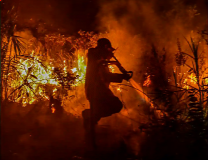 Our painting of the week is by Nova Scotian artist Maud Lewis.
From bit.ly/33hkBow and see sonyclassics.com/maudie/ ... 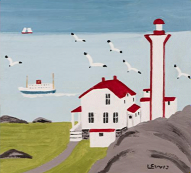