Welcome to program 123 of Shortwave Radiogram.

Some birds make beautiful chirps and tweets. Some sing sweetly.
Some sound like they're laughing, and some are talented enough
that they can mimic other birds and even human speech. But the
white bellbird is in a class of its own, blasting an obnoxious
"song" so loud that it sounds almost digital. Now, researchers
have measured just how ear-splitting that sound is – and crowned
it the loudest bird call ever recorded.

The white bellbird lives in the mountains of the Amazon, in
northern Brazil – and it's not shy about making its presence
known. The males of the species give off the telltale shrieks,
which can be heard for miles, to attract females.

But the story doesn't end once an interested lady bird comes
knocking. Not only do the males save their loudest calls for when
a female is checking them out, but they turn their head to aim
the audible assault directly at them. In a way, it's hard not to
see it as a perfect metaphor for masculinity.

"While watching white bellbirds, we were lucky enough to see
females join males on their display perches," says Jeff Podos,
co-author of the study. "We would love to know why females
willingly stay so close to males as they sing so loudly. Maybe
they are trying to assess males up close, though at the risk of
some damage to their hearing systems."
The world's loudest bird

While the calls themselves are well-known – how could they not
be? – the researchers say they're the first to accurately measure
how loud they can get. According to the study, the white bellbird
can belt out a song at an intense 125.4 decibels.

For reference, that level of noise is in the realm of a rock
show. It's more thunderous than a thunderclap, cacophonous than a
chainsaw, and even edges into the range of a jet engine during
take-off. It's far beyond the volume that begins to cause damage
to human hearing – 85 dB – and is over the point that would be
painful at close range.

That also makes it three times louder than the next loudest bird,
the screaming piha. But the team notes a trade-off – the louder
the song gets, the shorter its duration. That probably comes down
to the birds' respiratory system having a limit to its ability to
control airflow to create sound.

That said, the bird is known to have pretty well-developed ab
muscles and rib bones, helping it project to the back row.

The researchers plan to continue studying the bird to find out
more about how and why its song is so loud – and just how the
bellbirds can sing like that without deafening themselves or
their prospective mates.

The research was published in the journal Current Biology.


Next: The call of the white bellbird, followed by a photo ... 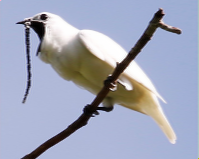 Germany should try to send an astronaut to the moon as a
part of the US-led mission in 2024, according to the
influential BDI business association. It wants the state to
ensure conditions for a "private spaceport."

A "massive" boost in state investment is needed for Germany to
keep up with space technology, members of the Federation of
German Industries (BDI) said on Friday.

"The strength of Germany as a high-tech country is not reflected
in the state investment into space travel," BDI chair Dieter
Kempf said in a press release.

Germany, according to Kempf, invests only €285 million ($317.5
million) per year into its space program, or about 0.05% of the
national economic output. France invests more than double that
amount. In order to keep step with space technology as it grows
ever-more commercial, Berlin should at least match the French
level of spending, Kempf said.

This recommendation is one of eight points listed in the BDI's
"Berlin Space Declaration" presented during the "Space Congress"
event in the German capital. The gathering brings together
politicians, industrialists, BDI representatives, and even
astronauts. The leader of the European Space Agency, Jan Wörner,
also attended the Friday event.

The BDI also urges the German government to create conditions for
building a private cosmodrome on German soil. Politicians should
facilitate the development of a German-made cargo rocket that
would be capable of carrying minor loads into space.

"If Germany does not create these possibilities, other European
countries will create new systems," said the BDI's Kempf.

'One small step for Germany'

Another point of the "Berlin Space Declaration" urges Germany to
send an astronaut to the moon. The move would be achieved in
cooperation with the US, where NASA is already working on a
mission to once again land humans on the moon by 2024.

German Economy Minister Peter Altmaier, who attended the Berlin
congress, was reluctant to pledge a windfall in state funding.

"I cannot promise you that we will move many extra billions," he
was quoted by the news agency dpa as saying. "But I can promise
you this: we will place this subject in the center of the public
debate."

German businesses believe that space technology and space travel
are becoming more and more commercialized. This development has
already been dubbed "New Space."

The BDI noted that some concepts of commercial space exploration,
such as exploiting raw materials from other planets or asteroids,
are still beyond humanity's reach. However, "based on rapid
technological innovation, the production of raw materials in
space is edging into the realm of possibility," the association
said.

The association of German businesses urged a system of
international regulations for future space mining. 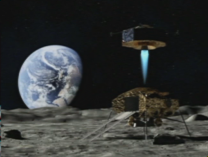 
This 1942 built Whirley Crane has been restored and is on exhibit
at the Baltimore Museum of Industry. From bit.ly/35Z9VNw ...

In Duluth, Minnesota, the 611-foot museum ship William A. Irvin
passes through a pedestrian bridge with seven inches to spare on
each side after repairs in dry dock. From bit.ly/31KixUM ... 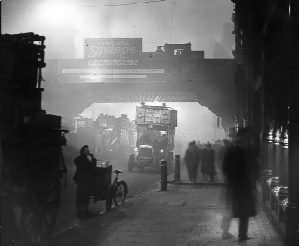 The moon rises behind One World Trade Center in New York on 15
October. From cnn.it/2pMHUZ2 ... 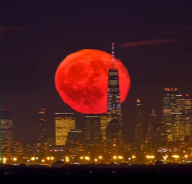 A male deer in a field in the Nalibokski Nature Reserve near
Kozliki, Belarus. From bit.ly/2qHAVkv ... 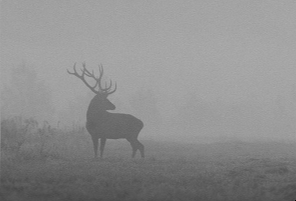 A colorful tree along the Mount Vernon Trail near Washington DC.
From wapo.st/2MJchss ... 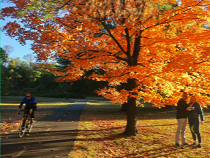 Fall colors in Bethesda, Maryland, on Monday. From
wapo.st/2N5D2Gi ...

Our painting of the week is "Trio of Pumpkins" by Tammie
Dickerson. From bit.ly/2BDV2Ca ...