Welcome to program 124 of Shortwave Radiogram.

The solar system may have a new smallest dwarf planet: Hygiea

The asteroid belt object known as Hygiea may be the new baby of
the dwarf planet family.

Hygiea, currently classified as an asteroid, already met three of
four requirements for dwarf planet status: It orbits the sun. It
isn't a moon. And it hasn't swept its orbital path clear of other
space rocks, the way fully fledged planets are able to. Now, new
telescope images reveal that Hygiea is nearly spherical, which
checks the last box to qualify as a dwarf planet.

If officially reclassified by the International Astronomical
Union, Hygiea would join the handful of dwarf planets, including
Pluto, in our solar system. About 430 kilometers across, Hygiea
would unseat Ceres, with its 950-kilometer diameter, as the
smallest dwarf planet discovered in our solar system, researchers
report online October 28 in Nature Astronomy.

High-resolution images from the Very Large Telescope in Chile
confirmed that Hygiea is about as round as Ceres - and that its
surface isn't marred by a huge impact basin. That was a surprise
for the researchers, led by astronomer Pierre Vernazza of the
Laboratoire d'Astrophysique de Marseille in France. They had
expected to see an enormous crater from a collision billions of
years ago that formed Hygiea's entourage of over 6,800 small
asteroids. By comparison, the asteroid Vesta sports a huge scar
from the formation of its own, smaller asteroid swarm.

Computer simulations run by Vernazza's team offer a possible
explanation: More than 2 billion years ago, a space rock about
100 kilometers across completely shattered Hygiea's parent body.
When most of the remnants clumped back together into the space
rock now known as Hygiea, they formed the smooth, spherical body
seen today. By contrast, Vesta - about three times as massive as
Hygiea and struck by 65-kilometer object - merely had some of its
material carved out, leaving behind a big divot.

Image: High-resolution telescope image of Hygeia shows its round
shape ... 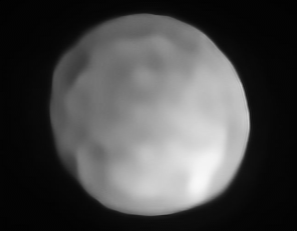 Carbon capture might not be such a great idea

Capturing carbon from the air is one proposed method for reducing
carbon dioxide (CO2) levels in the atmosphere—and reducing the
risk of climate change.

"All sorts of scenarios have been developed under the assumption
that carbon capture actually reduces substantial amounts of
carbon. However, this research finds that it reduces only a small
fraction of carbon emissions, and it usually increases air
pollution," says Mark Z. Jacobson, a professor of civil and
environmental engineering and a senior fellow at Stanford
University's Woods Institute for the Environment

Jacobson examined public data from a coal with carbon capture
electric power plant and a plant that removes carbon from the air
directly. In both cases, electricity to run the capture
technology came from natural gas. He calculated the net CO2
reduction and total cost of the carbon capture process in each
case, accounting for the electricity needed to run the carbon
capture equipment, the combustion and upstream emissions
resulting from that electricity, and, in the case of the coal
plant, its upstream emissions. (Upstream emissions are emissions,
including from leaks and combustion, from mining and transporting
a fuel such as coal or natural gas.)

Common estimates of carbon capture technologies—which only look
at the carbon captured from energy production at a fossil fuel
plant itself and not upstream emissions—say they can remediate
85-90% of carbon emissions.

Once Jacobson calculated all the emissions associated with these
plants that could contribute to global warming, he converted them
to the equivalent amount of carbon dioxide in order to compare
his data with the standard estimate. He found that in both cases
the equipment captured the equivalent of only 10-11% of the
emissions they produced, averaged over 20 years.

The researchers also looked at the social cost of carbon
capture—including air pollution, potential health problems,
economic costs, and overall contributions to climate change—and
concluded that those are always similar to or higher than
operating a fossil fuel plant without carbon capture and higher
than not capturing carbon from the air at all.

Even when renewable electricity powers the capture equipment,
Jacobson concludes that it is always better to use the renewable
electricity instead to replace coal or natural gas electricity or
to do nothing, from a social cost perspective.

Given this analysis, Jacobson argues that the best solution is to
instead focus on renewable options, such as wind or solar,
replacing fossil fuels.

This research is based on data from two real carbon capture
plants, which both run on natural gas. The first is a coal plant
with carbon capture equipment. The second plant is not attached
to any energy-producing counterpart. Instead, it pulls existing
carbon dioxide from the air using a chemical process.

Jacobson examined several scenarios to determine the actual and
possible efficiencies of these two kinds of plants, including
what would happen if the carbon capture technologies ran with
renewable electricity rather than natural gas, and if the same
amount of renewable electricity required to run the equipment
were instead used to replace coal plant electricity.

While the standard estimate for the efficiency of carbon capture
technologies is 85-90%, neither of these plants met that
expectation. Even without accounting for upstream emissions, the
equipment associated with the coal plant was only 55.4% efficient
over 6 months, on average.

Due to the high energy needs of carbon capture equipment,
Jacobson concludes that the social cost of coal with carbon
capture powered by natural gas was about 24% higher, over 20
years, than the coal without carbon capture. If the natural gas
at that same plant were replaced with wind power, the social cost
would still exceed that of doing nothing. Only when wind replaced
coal itself did social costs decrease.

Renewables will 'always be better'

For both types of plants this suggests that, even if carbon
capture equipment is able to capture 100% of the carbon it is
designed to offset, the cost of manufacturing and running the
equipment plus the cost of the air pollution it continues to
allow or increases makes it less efficient than using those same
resources to create renewable energy plants replacing coal or gas
directly.

"Not only does carbon capture hardly work at existing plants, but
there's no way it can actually improve to be better than
replacing coal or gas with wind or solar directly," says
Jacobson. "The latter will always be better, no matter what, in
terms of the social cost. You can't just ignore health costs or
climate costs."

This study did not consider what happens to carbon dioxide after
capture but Jacobson suggests that most applications today, which
are for industrial use, result in additional leakage of carbon
dioxide back into the air.

People propose that carbon capture could be useful in the future,
even after we have stopped burning fossil fuels, to lower
atmospheric carbon levels. Even assuming these technologies run
on renewables, Jacobson maintains that the smarter investment is
in options that are currently disconnected from the fossil fuel
industry, such as reforestation—a natural version of air
capture—and other forms of climate change solutions focused on
eliminating other sources of emissions and pollution. These
include reducing biomass burning, and reducing halogen, nitrous
oxide, and methane emissions.

"There is a lot of reliance on carbon capture in theoretical
modeling, and by focusing on that as even a possibility, that
diverts resources away from real solutions," says Jacobson. "It
gives people hope that you can keep fossil fuel power plants
alive. It delays action. In fact, carbon capture and direct air
capture are always opportunity costs."

The study appears in Energy and Environmental Science. 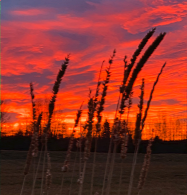 The Walloon town of Dinant sits on the banks of Belgium's River
Meuse, around 90 kilometers southeast of Brussels. From
cnn.it/2BXM5nK ... 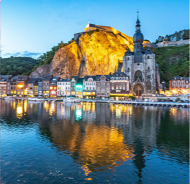 A firefighter monitors the Kincade Fire as it burns in
Geyserville, California. From wapo.st/2NqZdXD ... 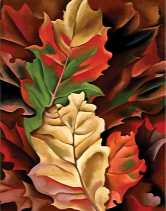 BBC Doc: Music For Misfits: The Story Of Indie - The DIY movement
https://www.youtube.com/watch?v=Zz36_a0G7gk