Welcome to program 130 of Shortwave Radiogram.

International broadcasters are increasingly concerned about their
ability to reach audiences in Iran as the authorities there crack
down on journalists working for foreign media outlets and hamper
access to the Internet, the president of RFE/RL said in an
interview with its Persian-language service, Radio Farda.

"We are very concerned about the targeting of our journalists
here at Farda," RFE/RL President Jamie Fly. "Our colleagues in
VOA Persian, the BBC, Deutsche Welle, and other international
broadcasters ... are [also] facing this situation."

Fly's comments come in the wake of sometimes-violent mass
protests across Iran following a government decision to raise
gasoline prices. During the protests, Tehran shut down access to
the Internet for several days.

"I think some of it is probably just a function of how fragile
the regime feels that the situation is," Fly said. "A reaction to
the protests, a moment of crisis, this sense that they need to
clamp down."

"The thing we are watching very closely is -- is this just a
recent development related to the protests, this uptick in
pressure, or is this the new normal?" Fly said. "Is this the way
that the regime is going to go after those brave Iranians who are
trying to bring fact to the Iranian people?"

He said RFE/RL is part of the Open Technology Fund, which is
funded by the U.S. Agency for Global Media and the U.S. Congress,
in order to develop "innovative solutions" for reaching audiences
in countries where the governments are actively restricting
access to the Internet.

"It's not the sort of problem that is just facing the Iranian
people," Fly said. "It's facing those in Russia, China, and
elsewhere."

"We will be working very closely [with the Open Technology Fund]
to make sure that we can use the tools that they develop to help
get our news and information into Iran, whatever the regime
does," he said.

One of the world's largest shipping lines, MSC Mediterranean
Shipping Company (MSC), has opted to begin using biofuel blends
to power some of its fleet, becoming the first major ocean
carrier to do so.

The decision by MSC follows successful trials with biofuel blends
earlier this year. The trials were completed using a 10 percent
blended bunker fuel. However, following further trials, the
company will now use a much higher blend consisting 30 percent
biofuel.

The blended fuel will, as of now, only be made available to MSC
vessels calling in Rotterdam, the Netherlands.

"We are pleased to see these trials completed successfully and
look forward to now using biofuel on our vessels as a routine
matter," said Bud Darr, Executive Vice President, Maritime Policy
& Government Affairs, MSC Group. "When using such blended fuel,
we can expect an estimated 15-20% reduction in absolute CO2
emissions. The potential CO2 reduction in the bio component of
these fuels could reach 80-90%, which we will monitor and confirm
over time."

MSC says that by using responsibly-sourced biofuels, it will help
provide an alternative solution for it to meet the International
Maritime Organization's 2030 CO2 emission reduction target and
"significant progress" towards the IMO's 2050 levels of ambition.

According to MSC, using biofuel on container ships will help it
meet its sustainability goals and could significantly help reduce
emissions and improve air quality.

"MSC's decision to use biofuel is complementary to the company's
broader strategic approach to sustainability," MSC said in a
statement. "The company remains committed to implementing
concrete plans to modernise its green and efficient fleet via the
largest container shipping investment program in the industry."

MSC's biofuel commitment comes as new data was released Monday by
the NGO Transport & Environment showing that MSC was responsible
for about 11 million tonnes of CO2 emissions in 2018, ranking it
as one of the top ten biggest polluters in the EU.

Image: The MSC Gülsün of the Mediterranean Shipping Company ...

The world's first successful flight of an all-electric commercial
aircraft was completed today as a modified six-passenger DHC-2 de
Havilland Beaver took to the air from the Fraser River at Harbour
Air Seaplanes terminal in Richmond, British Columbia with Harbour
Air CEO and founder Greg McDougall at the controls. Operated by
Harbour Air and equipped with a by a 750-horsepower (560 kW)
magni500 propulsion system built by magniX, it is the first in a
planned fleet of all-electric commercial seaplanes.

Electric propulsion has been very much in the news in recent
years as everyone from the builders of tiny drones to NASA have
looked into how to make an all-electric propulsion system that
can compete on some level with conventional commercial aircraft.

The idea may at first seem as odd as a horse-drawn zeppelin, but
electric aircraft have many potential advantages. Aside from
producing zero emissions and much lower noise levels, they also
promise lower maintenance costs because of their simpler design
with fewer moving parts.

However, they still suffer from relying on very heavy batteries
and having a very limited range. And while that may be a
deal-breaker for many commercial applications, it can be very
attractive for short-haul airlines that land and take off at
frequent intervals, such as in Puget Sound on the North American
west coast, where island hoppers are common.

This year, Harbour Air, the world's largest seaplane airline,
entered into a partnership with Redmond, Washington-based magniX
to produce an all-electric commercial seaplane fleet based on
magniX's high-power density magni500 propulsion system, which was
retrofitted to a standard Beaver seaplane. According to Harbour
Air, today's flight will be followed by starting the process to
certify the modifications and the propulsion system for regular
service before going on to retrofitting the rest of the Harbour
Air fleet.

"Today, we made history," says Greg McDougall, CEO and founder of
Harbour Air Seaplanes. "I am incredibly proud of Harbour Air's
leadership role in re-defining safety and innovation in the
aviation and seaplane industry. Canada has long held an iconic
role in the history of aviation, and to be part of this
incredible world-first milestone is something we can all be
really proud of."

A child plays on a swing as the sun sets at Lhoknga beach in Aceh
province, Indonesia. From bit.ly/2E5B9FB ... 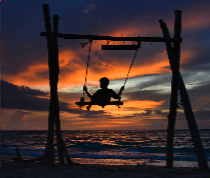 A swan swims on Lake Constance (Bodensee) before sunrise in
Constance (Konstanz), Germany, 6 December. From bit.ly/347U9ha
...

The Volcan de Fuego (Volcano of Fire) is seen in Acatenango,
Guatemala, on Saturday, 30 November. From cnn.it/2PFiE03 ... 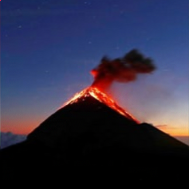 Cumulonimbus clouds at sunset in Jackson, Wyoming. From
bit.ly/2Ebwzpo ...

A great grey owl and her chicks Kamloops, British Columbia. From
bit.ly/34bCN33 ... 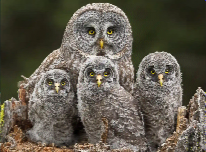 A new Christmas-themed mural by street artist Banksy in
Birmingham, UK. From bit.ly/35aZTbq ...

Spectators watch a Christmas lights display in the Minato
district of Tokyo, 6 December. From bit.ly/347U9ha ...

Our art of the week is "Fir Tree," a palette knife oil
painting on canvas by Leonid Afremov. From bit.ly/2ElrVFr ... 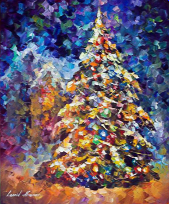