Welcome to program 133 of Shortwave Radiogram.

The Guinness Book of World Records has awarded the Japan
Aerospace Exploration Agency (JAXA) the official record for the
lowest altitude achieved by an Earth observation satellite.
During its mission from December 23, 2017 to October 1, 2019, the
Super Low Altitude Test Satellite (SLATS) “TSUBAME” reached a
suitably super-low altitude of 167.4 km (104 mi).

Earth observation satellites are excellent platforms for learning
more about our planet, but what makes them so effective is also
one of their major disadvantages. Because they sit in low-Earth
orbit at up to 2,000 km (1,200 mi), they can observe large areas
of the Earth's surface. Unfortunately, being at such an altitude
means that the resolution of the images that can be captured is
limited.

The TSUBAME mission was designed to test the feasibility of
placing satellites in super-low altitudes between 200 and 300 km
(120 and 190 mi), where they can capture high-resolution images.
The problem is that the highly tenuous atmosphere at that
altitude produces a thousand times more atmospheric drag than
higher altitudes, and the atomic oxygen present can cause
spacecraft to quickly deteriorate.

To overcome this, TSUBAME was made out of special
oxygen-resistant materials and was equipped with an ion engine
and gas-jet thrusters to help it maintain orbit and precise
positioning so it could capture surface images and measure oxygen
concentrations.

During its mission, TSUBAME started at an altitude of 271.5 km
(168.7 mi) before lowering to the record 167.4 km, which it
maintained for seven days. It managed to both withstand exposure
to the atmosphere and capture the desired test images.

"I think we managed to create this unprecedented satellite that
is able to maintain orbit in super low altitude, not only because
of the systematic and fundamental technologies that we possess to
develop and operate artificial satellites, including our many
years of experience of the ion engine and the tracking & control
technologies, but also because of the high level of science and
technology we have in Japan," says Sasaki Masanori, SLATS Project
Manage. "I would like to make use of this achievement toward the
future science, technology and satellite utilization, and
contribute toward helping to solve as many of our social issues
as possible."

Newseum, A Tribute to Journalism, Shuts Its Doors

WASHINGTON -- Hundreds of people began arriving outside 550
Pennsylvania Avenue in the U.S. capital shortly after 9 a.m. on a
drizzly late December morning.

As they walked toward the line that stretched at times out the
door, they glanced at the front pages of U.S. newspapers
published on December 30 around the country.

The visitors were hoping to get their last -- or in some cases,
their first -- look inside a museum dedicated to the importance
of a free press and the First Amendment before it shuts its
doors.

It was the museum industry's equivalent of a wake.

Newseum, sandwiched nearly equidistantly between the White House
and Capitol Hill, officially closed at the end of business on
December 31 amid financial difficulties after an 11-year run.

The closure is symbolic, many have said, of the newspaper
industry's own woes.

More than 2,000 newspapers have closed around the United States
over the past 15 years as their traditional business model has
been disrupted by the Internet and social media.

Companies that once advertised in newspapers have reallocated
their spending toward online platforms like Google and Facebook,
where people spend more of their time.

Subscription revenues for many papers have also fallen as people
seek out free online news sites.

The closure of Newseum also comes at a time when trust in the
media is being undermined by the spread of disinformation and
criticism from politicians.

U.S. President Donald Trump, a Republican, has repeatedly called
the media the "enemy of the people" at his sold-out rallies and
on Twitter, where he has 65 million followers.

More than half of Democrats believe the news media try to report
the news accurately and without bias whereas that number is below
40 percent for Republicans, according to the 2019 state of the
First Amendment nationwide survey, which is conducted by the
education arm of the museum.

The number of Americans that believe First Amendment freedoms
have gone too far has risen from 23 percent last year to 29
percent this year.

Jonathan Thompson, vice president of marketing and public
relations at the Newseum, said the parallels between the museum
closing and newspaper closing doesn't run deep.

"We are not the media industry. The reason for our closing is not
the same as the reason newspapers and other publications are
having such a challenge," he said.

Newseum's new, $450 million, state-of-the-art building with a
facade of Tennessee pink marble got off to an unlucky start.

Conceived during the boom years of the 2000s, its doors opened
just months before Lehman Brothers filed for bankruptcy in
September 2008, triggering a global financial collapse and the
worst U.S. recession since the 1930s.

The museum, which charges adults $26.45 after tax -- the cost of
movie tickets for two -- had to compete for visitors with other
city attractions, many of which are free.

"It has been more expensive to operate than we initially
projected. It is also a real challenge to operate a paid museum
in Washington, D.C., when we have fantastic Smithsonian Museums
-- which of course are free -- literally across the street," he
said.

Jennifer Rowland, a 24-year-old graduate, was among those rushing
to visit the museum on December 30 before it closed.

Rowland, who moved to Washington a year ago, said she had focused
on visiting the free museums in town first.

"There are a lot of free things to do [in Washington], which is
why I think this museum gets overlooked," she said.

Rowland said the closure wasn't a huge surprise, considering the
impact technology is having on the media industry. "It is a
little bit expected with the digital age, unfortunately. We don't
have as many newspapers anymore," she said.

The Newseum has seen about 10 million visitors since 2008,
Thompson said. The spacious museum has seven levels with 15
galleries, 15 theaters, and some eye-catching exhibits.

A KXAS-TV helicopter hangs from the ceiling above the lobby. The
museum holds one of the largest pieces of the Berlin Wall outside
Germany.

A wall that pays tribute to journalists who were killed carrying
out their professional duties, including reporters for RFE/RL,
stands as a separate exhibit.

Terry Bryant, a former broadcast journalist who is now a lecturer
at American University's School of Communication in Washington,
said that exhibit as well as a map of the state of press freedoms
around the world was one of the "most emotional" on display at
the museum.

Bryant has been taking his classes to the museum for the last few
years and said it served a "terrific purpose" and "made an
impact" on his students.

Visitors can also try their skill as a television reporter,
reading the news out loud before a camera, hear how journalism
affected historical events, and see artifacts belonging to
reporters, such as the notebook and case of Austin Tice, the
American freelance reporter kidnapped in Syria in 2012.

Jack Shafer, a former editor-at-large at Slate, criticized the
opulent project, describing it in an April 2008 article as a "Taj
Mahal for journalism" with trivial artifacts.

"Fascinating curios, for sure, but gazing upon them tells you
what about journalism? Repeat this lesson 6,214 times, and you
get my drift. The story of journalism is not the story of the
surviving relics," he said, recommending people avoid the museum
and its big fee.

Newseum won't disappear. Freedom Forum, its main funder, is
seeking a new location that will presumably be more modest.

The museum's unwinding will take about six months as the
artifacts are either stored or -- if on loan -- returned to their
owners, Thompson said.


Image: The Time Warner World News Gallery at the Newseum ... 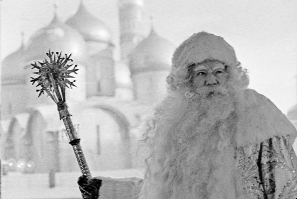 Sunrise at the Tidal Basin in Washington DC. From wapo.st/35gshIe
...

It's dark this time of year in Longyearbyen, Svalbard, the
northernmost inhabited place in the world. From nyti.ms/36eRMLo
... 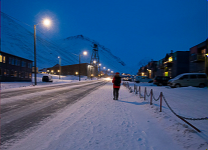 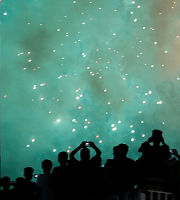 A low-in-the-sky mid-winter rainbow was seen in the Washington DC
area on 30 December. From bit.ly/2thpmBO ...

A man walks on a frost-covered railway track in the outskirts of
Srinagar, India. From bit.ly/39uRh1V ...

Our painting of the week is "Conversation With Jackson Pollock
No.41" by George Sanen. From bit.ly/37qr2Yr ...

Wishing everyone a happy and peaceful 2020!