Larry Hoppen of the pop-rock group Orleans was born January 12,
1951.


Welcome to program 134 of Shortwave Radiogram

As there is a slowdown in the western Canadian oil industry, a
new player is picking up the slack, helium.

In the universe, helium is the second most common element after
hydrogen, but that's in the universe. Here on Earth, helium is
somewhat rarer and as world reserves decline, the price is going
up. That's spurred new interest in Canada's prairie provinces of
Saskatchewan and Alberta.

Helium is the result of the decay of uranium and thorium, both of
which are present in Saskatchewan. The resulting gas gets trapped
deep underground in sedimentary rock when conditions are right.

While it may be a source for party balloons for most people, the
declining reserves are critical in other areas such as research
where it is used as a coolant in superconductors due to its
ability to remain liquid at extremely low temperatures. It's
also used in rocketry and in plasma welding.

The world market is expanding as the U.S government which has
heavily influenced world markets sells off its own strategic
reserves and leaves the market to the private sector by 2021.

Several new wells have been drilled and plans may include a new
liquefaction plant. An American firm has already built a
$10-million helium separation plant in the southwest corner of
Saskatchewan.

The U.S currently supplies about 10 per cent of global demand,
but companies exploring in the Canadian west expect they'll be
ready to fill that demand as American wells decline.

Image: Helium may be best known for party balloons, but it's a
critical resource in research and medicine and its value is
increasing ... 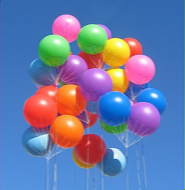 Sky lanterns are simple, festive, and beautiful, but can
also be dangerous. Authorities in various countries banned
their use after several fires were blamed on the floating
lights.

A simple wooden or metal frame, a paper shell, and a source of
flame are all you need to create a sky lantern. They first took
to the sky as military signals above the battlefields of ancient
China, and are sometimes still called Kongming lanterns after a
legendary 3rd century Chinese general who first put them to use.
Today, people all around the world view them as good luck
symbols.

Still, not everyone is a fan of the floating lights. Authorities
in various countries believe them to be a fire hazard, a source
of pollution, and possible disruption to air traffic.

A sky lantern works like a hot air balloon. The candle flame
bellow the shell warms up the air inside it, causing the lantern
to float up and stay airborne until the candle is extinguished.
Stiff edges near the bottom of the shell are meant to keep the
flame away from the potentially flammable material. However, the
lantern can malfunction or be swept by wind, bringing it into
contact with dry vegetation or flammable materials on the ground.

In 2013, a man in US state of Washington started a 500-acre
(202-hectar) wildfire after his sky lantern floated into a
hillside. In the same year, 13 UK firefighters were injured in a
huge fire which saw 100,000 tons of plastic recycling material
burst into flames in Birmingham. At the time, authorities said
the blaze was caused by a lantern landing in the depot. In 2018,
UK farmers, animal rights activists, and lawmakers decried the
use sky lanterns after one of them landed on a horse and set its
tail on fire. Most recently, German investigators said that
floating lanterns caused a New Year's Eve fire which killed
monkeys and apes in the Krefeld Zoo.

The German state of North Rhine-Westphalia, where Krefeld is
located, banned the use of sky lanterns in 2009. Nearly all other
German states have also imposed similar restrictions. According
to Wildlifetoday online portal, 30 US states have also made sky
lanterns illegal. Australia, Spain, Brazil and several other
countries have enacted nationwide bans.

In addition to fire risks, the lanterns' wire frames also pose a
risk to the environment and animals. Animal rights activists
claim birds often get entangled by metal components, while larger
animals try to eat the remains. Bits of metal can end up in
cattle feed, killing the animals, according to the Royal Society
for the Prevention of Cruelty to Animals (RSPCA).

Air traffic experts also warn of risk to aircraft – according to
Irish Aviation Authority (IAA), the flight path of sky lanterns
are hard to predict, and the items could become "a risk to
aviation" if sucked into a plane engine.

Irish officials say that the risk of collision is "small" but
urge the public not to release sky lanterns within 10 nautical
miles (18 kilometers, 11.5 miles) of an airport. The items should
also not be tied together or launched in groups of more than 20. 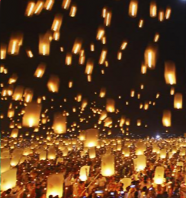 Ice on Earth's rivers is in rapid decline

The amount of ice in the Earth's rivers has declined rapidly over
the past three decades, and the trend is likely to continue,
researches report.

Rivers that seasonably freeze over drain more than a third of the
Earth's land mass. Examining more than 400,000 satellite images
over the past 34 years, researchers found that the overall amount
of river ice has declined, and will almost certainly continue to
do so as global temperatures continue to rise.

For every degree of increase in global temperature, there will be
about 6 days less of ice per year on rivers that freeze, the
researchers found.

"We found that 56% of Earth's rivers are seasonally affected by
river ice, which amounts to a much greater proportion of rivers
than previously thought," says George Allen, assistant professor
of geography at Texas A&M University.

"We found that almost all the river ice is located in the
Northern Hemisphere with only rivers in southernmost portions of
New Zealand, Patagonia, and Australia. It is important to note
that we only observed rivers with widths over 300 feet, so it is
likely that there a lot of smaller rivers and streams that also
freeze but we did not detect them."

Rivers are natural hotspots for greenhouse gas emissions to the
atmosphere, and these emissions typically slow down or completely
stop when rivers freeze, Allen says. The finding that the
occurrence of ice is declining suggests that the global river
network contributes more and more to the atmospheric greenhouse
gas emissions.

"The anticipated acceleration in the decline of river ice is not
evenly distributed around the world," Allen says. "In the United
States, river ice is expected to decline most rapidly in the
Rocky Mountains and in the Northeast.

"If you've lived in Texas for a long time, you probably haven't
thought that much about the importance of river ice," Allen says.
"However, in many parts of the world, river ice plays important
roles in transportation and in ecosystems.

"For example, during the winter, many remote Arctic civilizations
rely on frozen rivers as ice roads. In the spring, during river
ice breakup, ice jams can cause unpredictable and hugely
disruptive floods, but these floods actually benefit ecosystems
by distributing nutrients across floodplains."

Two recent technological developments made the study possible,
Allen says. One is the first global map of river location and
width from optical satellite images, and the second is Google
Earth Engine-provided cloud-based data that makes processing
hundreds of thousands of satellite images relatively easy.

The study appears in Nature. Additional researchers are from the
University of North Carolina. The NASA/CNES Surface Water and
Ocean Topography (SWOT) satellite mission, planned for launch in
September 2021, funded the work. Researchers expect the mission
will provide unprecedented observations of Earth's rivers and
lakes.


Farmland blanketed in smoke from a bushfire in Cobargo, NSW,
Australia, 6 January. From reut.rs/2Fv92An ...

A red sky from the smoke of the Snowy Valleys bushfire, on the
outskirts of Cooma, NSW, Australia on January 4. From
bit.ly/2QWosmq ... 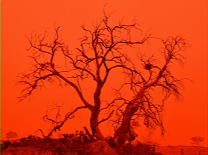 A boy slides down a snow covered slope in Kabul, Afghanistan.
From bit.ly/2uzr6aj ...

A view from Mogshade Hill in the New Forest, Hampshire, England.
From bbc.in/306kg80 ...

Sunset from the Mull of Kintyre, Scotland, looking over to
Ireland. From bbc.in/30912OP ... 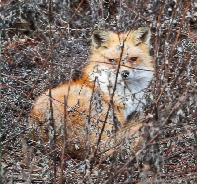 Our painting of the week is a self-portrait by Rembrandt. From
bit.ly/2FwgJGo ... 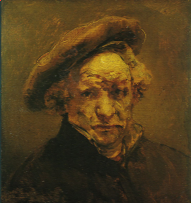