Welcome to program 136 of Shortwave Radiogram.

US Experts: Last Decade was Hottest Ever Recorded

The last 10 years were the hottest decade ever measured on Earth,
last year was the second warmest ever and NASA says "you haven't
seen anything yet."

The National Oceanic and Atmospheric Administration said
Wednesday that the average global temperature in the 2010s was
14.7 degrees Celsius, with eight of the 10 hottest years ever
recorded.

Parts of Africa, Asia, Australia, Europe and South America had
record-high temperatures in 2019. Alaska's average temperature
was above freezing for the first time in recorded history.

Many climate scientists who have seen the study said there was no
other explanation for the record-breaking warming than human
activity.

"This is going to be part of what we see every year until we
stabilize greenhouse gases," said Gavin Schmidt, head of NASA's
Goddard Institute for Space Studies. "We crossed over into more
than 2 degrees Fahrenheit warming territory in 2015 and we are
unlikely to go back. This shows that what's happening is
persistent, not a fluke due to some weather phenomenon."

Experts say natural causes of a warmer atmosphere, including more
heat from the sun and climate variations, are not big enough to
explain the long-term temperature rise.

For those who still question global warming, the scientists say
all one has to do is look at melting ice sheets, more powerful
storms, floods in some parts of the world and drought in others
as clear evidence.

For the first time, an asteroid has been found nearer to the sun
than Venus

For the first time, an asteroid has been found orbiting closer to
the sun than Venus - a neighborhood where asteroids are thought
to be rare and tricky to find.

The space rock, designated 2020 AV2, orbits the sun once every
151 days along an elongated trajectory that keeps it between the
orbits of Mercury and Venus. Such asteroids - known as Vatiras -
were first predicted in 2012, but until now, no one had ever
found one.

Asteroid 2020 AV2 was found January 4 by researchers at the
Palomar Observatory in southern California. Following an alert by
the International Astronomical Union's Minor Planet Center,
observers around the world confirmed and refined the asteroid's
orbit.

Asteroids that live inside Earth's orbit are notoriously
difficult to find because they spend most of their time close to
the sun. Astronomers can therefore look for such objects only
during brief periods of twilight.

According to computer simulations, Vatiras are rare, making up
only 0.22 percent of so-called near-Earth objects. Vatiras
probably start their lives in the main asteroid belt between Mars
and Jupiter and end up between Mercury and Venus after a series
of close encounters with rocky planets. Simulations suggest that
Vatiras typically don't remain in orbit around the sun for long -
continued gravitational tugs from nearby worlds and uneven solar
heating eventually send most crashing into a planet or grazing
the sun.


Image: Asteroid 2020 AV2 (arrow) appears as a white dot in this
image from a telescope in Italy ... 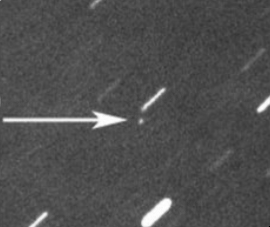 North of Silicon Valley, protected by the Point Reyes National
Seashore, is the only operational ship-to-shore maritime radio
station. Bearing the call sign KPH, the Point Reyes Station is
the last of its kind.

KPH is divided between two physical stations: one, knows as the
voice, is responsible for transmitting; the other half of the
station, known as the ears, was where human operators listened
for incoming messages. The voice is located 11 miles north of
Point Reyes in the small town of Bolinas, Calif., and the ears
reside within the Point Reyes National Seashore boundary nestled
in pastures full of cattle and backdropped by the Pacific Ocean.

Stations like this once riddled the California coastline as part
of a radio communication network. The operators who ran them were
charged with watching over the Pacific Ocean airways, relaying
messages to the sailors at sea.

Dillman, who was never an employee of KPH, but rather a
self-described "groupee and radio-obsessed person," says the
operators had to adapt to anything. "They were the best there
were. They are our heroes and heroines."

But once satellite communication became cheaper than paying radio
operators, telegraphy became obsolete, and the network of radio
stations became all but lost, as they were abandoned, sold and
scavenged for parts.

Marin County Congressman Clem Miller saved KPH from this fate by
writing and introducing the bill for the establishment of Point
Reyes National Seashore. The bill preserved the land from
development after operations ended.

The communications industry in the U.S. has seen several waves of
disruption. The first significant innovation was sending a
message by transmitting electrical signals over a wire.

In 1843, Samuel Morse, the father of Morse code, received funding
from Congress to set up and test his new communication wire from
Washington, D.C., to Baltimore. Upon completion, he sent the
first official telegraph saying, "What hath God wrought." What it
wrought was money.

Morse received enough funding to string wire across an unsettled
American landscape. From 1843 to 1900, wired telegraphy reigned
until a new technology disrupted the communication monopoly of
Western Union.

For almost 100 years, Morse code was used to communicate with
ships at sea. By 1999 the industry had switched over to the
cheaper and more efficient satellite communication systems.

The Point Reyes KPH station ended operations on June 30, 1997.
The last day of U.S. commercial use of Morse code was July 12,
1999. The final message sent was the same as Morse's first: "What
hath God wrought."

'This was the end'

"It's just beeps in the air," says Dillman. "That is all Morse
code is. And yet it was so impactful and emotional to these
people," he says about the operators and sailors he was with
during the last day of Morse. "Because here they are seeing their
career, their way of life, their skills disappearing. This was
the end of the line. It used to be that you could take your
license and telegraph key and move onto the next station, get a
job, no problem. This was the end."

After the last day of Morse in 1999, two years after KPH shut
down, Richard and a few other radiomen drove up to the shuttered
KPH station to assess how harsh the elements had been in the two
years since it closed.

"Here it was, our life's work, just handed to us," Dillman says.
"Because here are the ears, in Point Reyes, still living. The
voice in Bolinas - dark and cold, but existing. So all we had to
do was convince the park service that [restoring the station] was
worth doing, and we were the guys to do it. And we are still
amazed that they bought our story, and we have not turned back."

Dillman and the rest of the radio squirrels that hang around KPH
can be found every Sunday and more than welcome visitors. 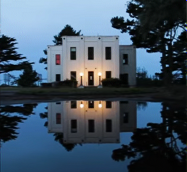 A scene from last week's extreme snowfall in St. John's
Newfoundland. From bit.ly/2Gfv36y ...

It looks like a flower, but it's really the reaction of a
combination of strains of E. coli (green) and Acinetobacter
baylyi (red) bacteria growing on agar. From bit.ly/2RjaMn2 ... 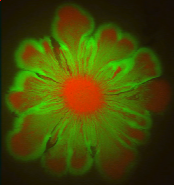 One of the digital presentations of "Machine Hallucination" by
Turkish artist Refik Anadol at Artechouse in New York City.
From bit.ly/2GbQ567 and see bit.ly/2Ggxfus ... 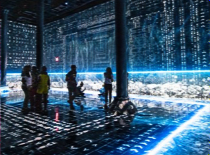 A man walks through a rainbow created by prisms at the
Smithsonian National Museum of the American Indian.
From wapo.st/38qHto6 ...

Lanterns hung on a tree ahead of the Chinese Lunar New Year
celebrations in Beijing. From bit.ly/3azua6B ... 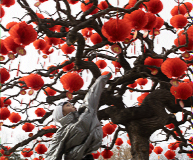 Our art of the week is a newly issued German postage stamp
honoring press freedom. From bit.ly/37nscEw ... 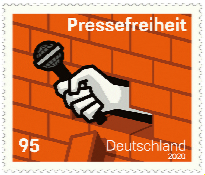 Sackville 10" EP "The Principles of Science" on Constellation Records:
http://cstrecords.com/artist/sackville/