Welcome to program 142 of Shortwave Radiogram.

Two unmanned commercial satellites have docked in orbit for the
first time. On February 25, Northrop Grumman's Mission Extension
Vehicle-1 (MEV-1) linked up with the Intelsat 901 (IS-901)
communication satellite at an altitude of 22,416 mi (36,076 km)
above the Earth as part of a project to extend the service life
of satellites that are running low on propellants.

The building and launching of satellites is extremely expensive,
so it's more than just frustrating when a perfectly good
spacecraft has to be disposed of or abandoned simply because it
has run out of the propellants needed to keep it in its proper
orbit and pointed at Earth. There have been a number of solutions
proposed for this problem – in this case Northrop's MEV-1 is
designed to match orbits with aging satellites, dock, and take
over the job of maintaining orbit and attitude.

MEV-1 was launched on October 9, 2019, and then executed a series
of orbital maneuvers to rendezvous with IS-901, 180 mi (290 km)
above geosynchronous orbit. Northrop says the target
communication satellite was removed from service last December
after over 19 years of service and its customers transferred to
other Intelsats.

MEV-1 approached the stern of IS-901 and used a drogue mechanism
to capture the satellite and pull itself in to dock over the
satellite's now-inoperative main thruster. The combined
spacecraft is currently undergoing system checks before MEV-1
takes over attitude and orbital maintenance in March.

If the test is successful, MEV-1 will remain docked for five
years before sending IS-901 into its final decommissioning
trajectory. MEV-1 will then undock and proceed to another aging
satellite. In all, MEV-1 is expected to remain in service for 15
years. Meanwhile, MEV-2 is slated to launch in March 2020 and
rendezvous with another Intelsat.

Eventually, Northrop and its subsidiary SpaceLogistics LLC plan
to send up a fleet of such maintenance craft to not only extend
satellite service life, but also for refueling, servicing, and
robotic assembly of spacecraft.


Image: MEV-1 moves towards IS-901 (pictured) to prepare for
proximity operations ...

WASHINGTON - China is threatening to retaliate against the United
States over its decision to limit the number of state media
personnel allowed to work in the U.S.

Hua Chunying, a spokeswoman for the Foreign Ministry, issued a
far more ominous warning on her Twitter feed, saying "Now the US
kicked off the game, let's play."

Chinese citizens working for other media organizations in the
U.S. are not affected by the cap.

The five entities are determined by the U.S. as "explicit
propaganda organs of the Chinese Communist Party (CCP)" and had
been previously designated by the State Department as foreign
missions of the Chinese government.

"Our goal is reciprocity," said Secretary Pompeo in a statement.
"As we have done in other areas of the U.S.-China relationship,
we seek to establish a long-overdue level playing field. It is
our hope that this action will spur Beijing to adopt a more fair
and reciprocal approach to U.S. and other foreign press in
China."

A senior State Department official said even after this cap is
implemented, the five Chinese state media groups continue to
employ more Chinese personnel in the U.S. than foreign reporters
at all U.S. media outlets in China, combined.

The U.S. has issued 3,000 I-1 visas to Chinese nationals working
in the United States since 2015, said another senior Trump
administration official. "By contrast, U.S. news outlets have
only about 75 American or other non-Chinese citizens working for
them inside of mainland China."

I-1 visas are issued by the U.S. government for representatives
of foreign media to work in the United States.

The U.S. decision comes after the Foreign Correspondents' Club of
China (FCCC) published its annual media freedoms report,
"Control, Halt, Delete: Reporting in China Under Threat of
Expulsion," an in-depth examination of media freedoms in China in
2019.

"The U.S. is taking this action in order to clearly communicate
the severity of our concerns about the abusive, unfair and
non-reciprocal treatment of international press in China," said a
senior State Department official on Monday.

The FCCC report finds Chinese authorities have weaponized visas
against the foreign press, issuing truncated press credentials to
a dozen journalists in 2019, and expelling four correspondents
from China since August 2019.

A spokesperson for China's Foreign Ministry said the FCCC report
was "inappropriate," and that China does not recognize the
organization.

The U.S. announcement Monday also comes after China expelled
three Wall Street Journal reporters, a move seen as a punishment
for a recent opinion piece published by the U.S. newspaper.

In the past few weeks, Chinese citizen journalists who have been
chronicling the coronavirus outbreak and seen as defiant to the
Beijing government were said to have "disappeared."

On Feb. 28, outspoken Hong Kong publisher Jimmy Lai and two
prominent opposition politicians were charged with illegal
assembly over a pro-democracy gathering in 2019. Lai, who has
made financial contributions to Hong Kong's pro-democracy
demonstrators, was later released on bail.

On Feb. 24, China sentenced book publisher Gui Minhai, a Swedish
citizen who disappeared in 2015 and was believed to have been
abducted by Chinese agents in Thailand, to 10 years on charges of
"providing intelligence" overseas.

"We're witnessing an assault on free speech inside of China that
goes even beyond what it was a decade ago," said a senior Trump
administration official on Monday.

The five Chinese state media groups' U.S. operations will have to
disclose their personnel rosters, as well as hiring and firing
decisions, according to the State Department. In addition, they
are required to register properties that they rent or own in the
U.S.

U.S. officials have said there is "an awakening" to what they
call Chinese propaganda outlets operating on U.S. soil. For
example, CGTN, formerly known as China Central Television America
(CCTV America), was once warmly welcomed to the State Department
in an event in 2013, but now faces scrutiny as a Chinese foreign
agent.

At the State Department podium, Ma Jing, director general of CCTV
America, touted CCTV as a bridge between the U.S. and China to
promote knowledge and understanding.

Water pours down the dam wall of Wet Sleddale Reservoir, Cambria,
UK, in the wake of heavy rain from Storm Dennis.
From cnn.it/32T7pHx ...

The sun rises behind the railway viaduct across the Ruhr valley
in Herdecke, Germany. From cnn.it/32T7pHx ...

A spring flower on S Street NW in Washington DC. From
wapo.st/39tzWFW ...

The Danish team competes in the Men's Team Pursuit qualifying at
the UCI track cycling World Championship in Berlin. From
bit.ly/2ToCHmn ...

Lightning strikes behind the chapel of Panagia Gorgona on the
island of Lesbos, Greece, Februry 27. From bit.ly/32Tnih9 ...

High winds blew water from Lake Erie (usually frozen this time of
year) onto homes along the shore, causing scenes like this in
Hamburg, New York, February 29. From bit.ly/39t9SuS ...

Our painting of the week is "Crocuses" by an unspecified
Ukrainian artist. From bit.ly/2TJKKsS ...

RNEI plays some recent pop tunes from N. Europe countries, and includes
a playlist in MFSK64 embedded in one of the songs! A 30min "express"
edition of TIAMS follows in the second half of the hour.

The How "Dreaming of Lily" live in SF 2010:
https://www.youtube.com/watch?v=ZtdqMwJslh4

Opening of "What Will They Think Of Next", opening played by David McLey
https://www.youtube.com/watch?v=LuE_Jrohnbc (noted synth-legend Laurie Spiegel in the YT comments!)

Hello everybody,
(Note, Emoji flags are only known to work on Tivar!)

Thank you for listening and decoding, I hope you enjoyed the show!

This Is An Express Music Show
March 2020

The Three Suns - Breath of Spring

Oh No The Modulator, clips of a perfomance in Toronto, 2002:
https://www.youtube.com/watch?v=3a0-7j0YFuE

We want to start this post off by thanking all of you heavily! We expected maybe 1 or 2 people would listen and send in a report and maybe they’ll also send feedback … we didn’t expect the amazing response we received! To all of you who wrote in with suggestions, nice comments and feedback, we can’t thank you enough, it brightens our day when we read them!

We’ll start with a final summary of RNEI #1 and then a very exciting announcement for RNEI #2 (hint, it involves TIAMS!)

We received over 40 emailed reception reports which was unexpected and loads of them had wonderful and encouraging comments. We had people in Japan staying up until the early hours of the morning to hear RNEI, a Canadian catching us on their receiver in Newfoundland and so many more listeners than we could have ever predicted. Thank you for all of your support!!

The MFSK 64 was a half-success, most people got some of it which isn’t bad!
Here are some of the decodes people managed to get and send in: 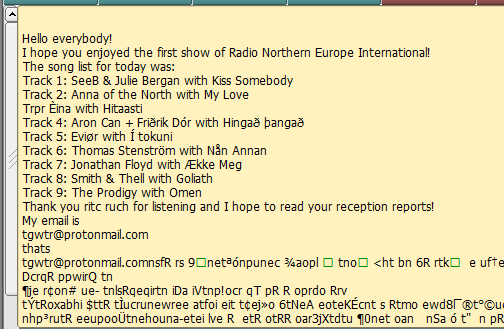 A listener of ours has put together this look at our MFSK section:
http://www.rhci-online.net/radiogram/SW_Radiogram_2020-02-15.htm#RNEI

The song list for show #1 was:
Track 1: SeeB & Julie Bergan with Kiss Somebody

Track 2: Anna of the North with My Love

Track 9: The Prodigy with Omen

Now for the exciting news!

Radio Northern Europe International has worked with This is a Music Show to make a broadcast consisting of 30 minutes of RNEI and 30 minutes of TIAMS, that’s 1 hour of great music!
We really love what TIAMS has made for us and we can’t wait to share it with you!!

Radio Northern Europe International show #2 will have music from Iceland, Norway, Ireland, Sweden, Denmark and Finland this month, I really love the music we are playing and we hope to introduce you to some new music this month!
Songs 4,5 and 6 are my favourites this show!

Broadcast Times:
We have good news to those of you not in Europe and those of you nearer the transmitter, multiple times throughout the month! RNEI #2 will broadcast 5 times on 6070KHz at the following times:

Digital modes:
In RNEI Show #2 the final song will have the MFSK32 embedded into it. This time: text, Emoji and some Icelandic art! (Note, an app like TIVAR shows the emoji!)
TIAMS’ contribution will contain some MFSK64 text and an MFSK64 image!
Many thanks to one of our listeners for suggesting our final MFSK song!

Audio Processing:
This show Daz has been working hard making an audio processor to try and expand the audio range of RNEI! We have decided on trying to broadcast a flat signal to combat the noise floor. This means that the highs might come across a bit too bright and the bass might feel bit lacking.
Don’t worry, a little bit of EQ on the receiver should reverse it ending up with a better frequency range than before! Most standalone radios should already apply a high frequency reduction however SDRs can omit this!

You can send your reception reports, feedback and suggestions for RNEI to qsl@rnei.org!
Wishing you good reception conditions and all the best,
-Roseanna