Welcome to program 23 of VOA Radiogram.

Next is another sample of VOA Chinese text. If the Chinese

characters appear as blocks in your decoding software, try

copying the blocks to a word processor or another application to

see if the characaters appear. You could also download the East

that may one day help law enforcement officials and emergency

It was designed by researchers at Johns Hopkins University's

The robot is a versatile moving platform with a humanoid

attachment that looks like a modern day centaur. It can turn in

and even manipulate them with human-like hands.

But Robo Sally was not initially designed for sentry duties.

Program, said, "The purpose of that program is to develop

prosthetic arms that have all the capability of your natural

arms, and you do all the complex motions that we can do with the

natural arm - with the robot. We had this idea if we did this for

prosthetics for humans, we could also put these on robotic

platforms and enable the robots to go out into dangerous

It was a complex task. McLoughlin said the device not only had to

have many small motors to mimic the flexibility of the human

hand, it needed human-like strength. The thumb was especially

difficult because it allows the hand to grasp objects. And

everything had to fit into a space about the size of a hand.

The next problem, McLoughlin said, was to figure out how to

control the artificial hand. "So we had to figure out how to make

the connection between the brain and this arm. We've done that

for spinal injury patients, where we can actually interface with

the brain and use the patient's thoughts to control the arm."

Of course, for search-and-rescue duties, Robo Sally will be

operated by wireless remote control, through special gloves and

glasses. The glasses allow the operator to see the robot's hands

and enables him to finely control their movement.

McLoughlin said robots like this could be used in "dull, dirty or

dangerous" situations where human dexterity is a requirement.

"So, for example, opening a door, or turning the valve or, you

know, going to a factory or a power plant like Fukushima, that

was all designed for humans. You need to be able to go in and

McLoughlin said the technology is not ready for practical

application, but he predicts that within five years we will see 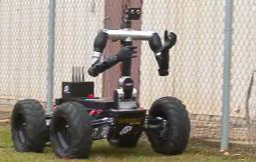 NASA is ending its attempts to restore the Kepler Space Telescope

to full working order. The US space agency will now focus on

analyzing the data collected over the past four years as the

spacecraft searched for Earth-like planets around other stars in

Launched in 2009, Kepler's mission was to find Earth-sized

planets in or near the habitable zone, the region around a

planet. The mission's principal investigator said Kepler has been

"At the beginning of the mission, no one knew whether Earth-sized

planets were abundant or rare in our galaxy. Now at the

completion of the Kepler observations, we know that our galaxy is

filled to the brim with planets," William Borucki said. "It's

covered with stars, most of the stars have planets."

with a wide range of sizes and orbital distances. Most of these

The four-year mission was extended in 2012, but ended last week

"The wheels are sufficiently damaged that they cannot sustain

spacecraft pointing control for any extended period of time,"

With its observational capability compromised, the Kepler team is

looking into whether the space telescope can conduct a different

type of mission, potentially including an exoplanet search, using

the two operational reaction wheels and thrusters. NASA has

called on the science community for ideas.

said. "They are suggesting ideas and we look at them [and ask],

now focusing on data collected by the spacecraft over the past

four years, which Borucki expects will yield hundreds if not

analysis we will be able to answer the questions that inspired

the Kepler mission: Are Earths common or rare in our galaxy?" he

Borucki sees Kepler's journey is a "critical first step in the

exploration of our galaxy." NASA is scheduled to launch a

follow-up mission to Kepler in 2017. The Transiting Exoplanet

closer to our solar system than Kepler did.

:tt:51 Remembering When Right Was Right and Left Was Wrong

:sb:51 Remembering When Right Was Right and Left Was Wrong

Growing up in the southern Kazakh village of Temirlan, Dina got

used to a series of daily corrections.

She'd pick up a fork with her left hand. Someone would move it to

her right. At school, she'd work on a lesson holding a pencil in

her left hand. Her teachers, worried, would urge her to switch to

"I was also trying to write with my right hand, but it didn't

work," she says. "I was the only one in my school who was

left-handed. So it was a hard time, because everyone was calling

me a lefty. 'Solaqay' - that's in Kazakh. It literally means a

person who writes with their left hand, but at that time it did

have some negative connotations."

"sinistral," or predisposed to using their left hand, rather than

their right, for writing and most manual functions.

percent of the human population.

But as the world marks International Left Handers Day on August

13, some say the real number is in fact far higher, and that many

lefties have been forced to switch hands because of unfounded

fears that left-handers were somehow disabled, odd, or simply

The stigma was especially widespread in the former Soviet Union,

"It was simply a lack of knowledge that played a role," says

simpler when a child writes with his right hand. So it's easier

to put something in his right hand and say, 'Write.' That's how

it was in the Soviet Union."

But some say everything from language to religion has added to

the longstanding cultural preference for right over left.

In many languages, of course, the word for "right" is not only

used to designate a direction but to signify correctness,

truthfulness. By contrast, the word "left" in languages such as

Russian is often used to connote something fake or of poor

By extension, it is traditionally the right arm that is used in

hand-on-heart pledges, military salutes, and making the sign of

the cross. In Islam, standard etiquette dictates that a person

must enter a house or mosque right foot first, but use their left

foot to enter a lavatory.

With such traditions in mind, it might seem reasonable to

encourage left-handed children to switch to the right.

Science, however, provides its own compelling argument for

leaving left-handers alone. The brain, after all, is divided into

two hemispheres, each with its own distinct function and each

directing the motor functions of the body's opposite side.

In short, the left side of the brain - the hemisphere responsible

for language, math, and rational thought - controls the right

cause considerable chaos as the brain struggles to establish new

communication paths with the body.

According to Chichkanov, tampering with the formula can have

devastating consequences on a child's ability to learn.

"If a lefty writes with his right hand, it's bad, because we're

he says. "So a child who has had his hand changed is more prone

to distraction; he absorbs information more poorly. As a result,

he can become more irritable. That kind of process simply doesn't

improve his chances of success at school."

Any lingering doubts about left-handers is easily dispelled by a

look at some of the world's most accomplished people. Famous

There is even speculation that Russian President Vladimir Putin

is a closet leftie. Although the Russian leader writes with his

right hand, he also wears his watch on his right hand --

making the sign of the cross with his left.

This article originally appeared in the RFE/RL web site:

Remembering When Right Was Right and Left Was Wrong 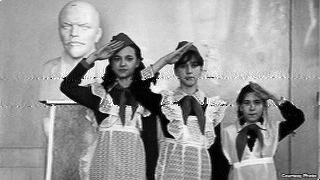