Welcome to program 39 of VOA Radiogram from the Voice of America.

Biomedical researchers have only recently started using
supercomputers in their research, but the results already are
showing.

Scientists at the University of Tennessee and Oak Ridge National
Laboratory's Joint Institute for Computational Sciences, using a
supercomputer specialized for bioresearch, have identified a
molecular 'switch' that may turn on and off the bad behavior of
disease-causing bacterium.

The world's second most powerful supercomputer, called Anton,
showed that a pair of amino acids called Phe396 helps the E. coli
bacteria move and pass information to proteins inside the cell
about the local environment.

Supercomputer Anton can create models of the actual activity of
proteins so far known only through their static appearance,
produced by X-ray crystallography. So far, not much has been
known about their ability to interact with other molecules.
Scientists say that exchange of signals between complex molecules
is a dynamic process that can hardly be understood using only
their pictures.

The researchers now plan to look for clues about how the new
discovery can be employed to find more effective disease-fighting
drugs.

Results of the research were published in the journal Nature
Communications.

The European Space Agency this week successfully launched the
star-mapping satellite Gaia on a mission that will take it more
than a million kilometers from Earth - to create the first
three-dimensional (3D) map of our galaxy, the Milky Way.

The two-ton satellite, launched from the European Space Agency's
center in French Guiana aboard a Russian Soyuz rocket, reached
the initial orbit and deployed a 10-meter circular sunshield to
keep the instruments on-board, including a telescope, cool. In
order to focus on very distant and faint stars, Gaia has to be
mechanically and thermally stable, so it has almost no moving
parts.

Mark McCaughrean, the mission's chief scientist, says, "It will
measure the positions of a billion stars but also their speeds,
their motions. And with that we can run a movie of the Milky Way.
We can run it forwards, into the future, how the Milky Way will
develop by looking at all the stars and how they move. But we can
run it backwards as well, and we can see how the Milky Way
actually formed in the first place."

Gerard F. Gilmore, a professor at Cambridge University's
Institute of Astronomy, says the three-dimensional picture will
eventually cover half of the Milky Way and provide new knowledge
about what keeps it together.

"And the particular interest that I have in here, locally, is in
the nature of dark matter," he said. "What is dark matter made
of? Dark matter is most of the weight in the Milky Way. It is
dark matter that holds the Milky Way together. If there weren´t
all this dark material, our sun would fly off...away from the
galaxy. The whole galaxy would fall apart."

The Gaia satellite will be moved to a distance of 1.5 million
kilometers from Earth, to a gravitationally stable point called
L2, where it will start its five-year mission of taking
approximately 70 images of each star in our galaxy, building a
catalog of about one billion stars.

L2 is also designated as the parking space for NASA's
supersensitive infrared James Webb Space Telescope, scheduled for
launch in 2018.

The overal cost of the Gaia mission is around $1.3 billion.

Next, an image of the ESA Gaia satellite... 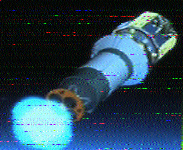 Scientists say they were able to forecast the size and location
of an earthquake using GPS to study changes in the Earth's shape.

The Georgia Institute of Technology researchers say they
predicted the magnitude 7.6 Nicoya earthquake that shook Costa
Rica in 2012.

The Nicoya Peninsula in Costa Rica is one of the few places where
land sits atop the portion of a subduction zone where the Earth's
greatest earthquakes take place. That makes it a good spot for
learning how large earthquakes rupture.

Subduction zones are locations where one tectonic plate is forced
under another one and can often be the sites of devastating
temblors. The magnitude 9.0 earthquake off the coast of Japan in
2011 was due to just such a subduction zone earthquake.

Because earthquakes greater than about magnitude 7.5 have
occurred in this region roughly every 50 years, with the previous
event striking in 1950, scientists have been preparing for this
earthquake through a number of geophysical studies. The most
recent study used GPS to map out the area along the fault storing
energy for release in a large earthquake.

"This is the first place where we've been able to map out the
likely extent of an earthquake rupture along the subduction
megathrust beforehand," said Andrew Newman, an associate
professor in the School of Earth and Atmospheric Sciences at the
Georgia Institute of Technology.

Through a series of studies starting in the early 1990s using
land-based tools, the researchers mapped regions where tectonic
plates were completely locked along the subduction interface.
Detailed geophysical observations of the region allowed the
researchers to create an image of where the faults had locked.

The researchers published a study a few months before the Nicoya
earthquake, describing the particular locked area with the
clearest potential for the next large earthquake in the region.
The team projected the total amount of energy that could have
developed across that region and forecasted that if the locking
remained similar since the last major earthquake in 1950, then
there was likely enough energy for an earthquake on the order of
magnitude 7.8 there.

"It occurred right in the area we determined to be locked and it
had almost the size we expected," Newman said.

The researchers hope to apply what they've learned in Costa Rica
to other environments. Virtually every damaging subduction zone
earthquake occurs far offshore.

"Nicoya is the only place on Earth where we've actually been able
to get a very accurate image of the locked patch because it
occurs directly under land," Newman said. "If we really want to
understand the seismic potential for most of the world, we have
to go offshore."

Because of limits in technology and scientific understanding
about processes controlling fault locking and release, scientists
cannot say much about precisely when earthquakes will occur.
However, earthquakes in Nicoya have occurred about every 50
years, so seismologists had been anticipating another one around
2000, give or take 20 years, Newman said.

Scientists have been able to reasonably map portions of these
locked areas offshore using data on land, but the resolution is
poor, particularly in the regions that are most responsible for
generating tsunamis, Newman said. He hopes that his group's work
in Nicoya will be a driver for geodetic studies on the seafloor
to observe such Earth deformation. These seafloor geodetic
studies are rare and expensive today.

"If we want to understand the potential for large earthquakes,
then we really need to start doing more seafloor observations,"
Newman said. "It's a growing push in our community and this study
highlights the type of results that one might be able to obtain
for most other dangerous environments, including offshore the
Pacific Northwest."

The study was published online Dec. 22, 2013, in the journal
Nature Geoscience.


The following VOA News story is in Flmsg format...

MONTGOMERY COUNTY, MARYLAND - Mark Mills quit his steady job as a pastry chef for the unsteady life of
a farmer.

Although the United States is one of the world's leading agricultural powers, few Americans are
farmers, just two percent of the population. In recent years, more small farms have popped up to serve
the growing demand for locally produced food. Like Mills, the people running these ventures often have
no experience in farming.

Mills majored in history in college and what he knows about producing food comes from gardening and 26
years working in restaurants.

That love of food has become nearly a national obsession in recent years. Here's one indicator: the
number of farmers' markets has more than doubled in the past decade.

Sarah Miller with the Department of Economic Development says it worked better than they expected.

"Boy, we didn't even know how many we would get," Mills said. "We thought maybe one or two would be
great, but I don't think that we expected four."

"They provided the connection with the landowner, so I could actually have the land to farm on, which
is key," Mills said. "Then, certainly, they provided the financing for the deer fence and the
irrigation, some basic things to get going."

They connected him with a mentor: farming veteran Woody Woodroof.

"The big thing to work with him on now is season extension," Woodroof said, "helping him to do the
things that will allow him to harvest crops deeper into the fall and early winter."

The hardest part has not been growing the crops, he says. It's been selling them.

"I won't say that I broke even. It would be nice," Mills said. "I probably put five grand [thousand
dollars] of my own money in. I'm probably going to walk away with four, four-and-a-half."

Luckily, his wife's non-farm job will keep them afloat financially for now. Experts say many new
farmers need to support themselves with another source of income.

Despite the challenges, Mills has no regrets.

"If it's really something you want to do, if the opportunity comes along you've got to take it," he
said.

Data on just how many other novice farmers are taking that opportunity will be detailed in a U.S.
Department of Agriculture report early in 2014.

VOA Radiogram now changes back to MFSK32 for closing
announcements...