Welcome to program 41 of VOA Radiogram from the Voice of America.

All content will be press releases from the Broadcasting Board of
Governors, parent bureaucracy of the Voice of America and other
entities of US government funded international broadcasting:

Washington, D.C. – Programming across the Broadcasting Board of
Governors' global media networks reached an estimated 206 million
people per week in 2013, including large audiences in countries
that are strategically critical for U.S. foreign policy.

The 206 million weekly reach reflects the combined TV, radio,
Internet, and mobile audiences of Voice of America, Radio Free
Europe/Radio Liberty, Radio and TV Martí, Radio Free Asia and the
Middle East Broadcasting Networks (Alhurra TV and Radio Sawa) and
is a net increase of nearly 31 million from last year's total, as
detailed in the BBG's 2013 Performance Accountability Report. For
the first time, TV audiences have surpassed radio, with the TV
audience measuring 110 million and radio reaching 109 million
people per week. The Internet audience has grown substantially
from last year, with 22 million reached online. Some of the
increase represents data from countries that were not surveyed
previously.

"Our journalists produce high quality programming, and we're
finding fresh ways to innovate in content delivery. This makes it
possible for the networks supported by the BBG to reach these
record-breaking audiences," said BBG Chairman Jeff Shell.
"Through these means, we help to nurture and sustain free, open,
democratic societies by supporting free press and free
expression, and by conveying the American democratic experience
to countries where the media are not free. This research data is
critical in helping us navigate challenging media environments,
and connecting with audiences on the platforms that they prefer."

The BBG strongly believes in meeting audiences on their media of
choice. As such, the BBG employs diverse distribution models
across its broadcast regions, ranging from syndication by placing
an Alhurra TV program on a popular channel in Egypt, to Radio
Free Asia and VOA's shortwave programs in tightly-controlled
countries such as North Korea.

The BBG's largest audiences are in Indonesia (21.6 million),
Nigeria (20.7 million), Mexico (14.9 million), and Iran (14.5
million), all countries in which the BBG has made strides in
innovative programming.

--In Indonesia, drawing on an affiliate-based strategy, VOA
content is carried on six of the top national TV networks as well
as on FM radio stations across the country. VOA also seeks
digital distribution opportunities, particularly on mobile
devices, ownership of which is growing rapidly in Indonesia.

--In northern Nigeria, where the terrorist group Boko Haram has a
foothold, VOA added weekend programming and a new SMS mobile
service in the past year to provide breaking news updates. In
2013, the BBG expanded its overall broadcast reach in Africa by
installing FM transmitters in Bamako, Mali, Juba, South Sudan,
and N'Djamena, Chad.

--In Mexico, VOA has partnered with high-profile affiliates to
successfully place its Spanish Service's "U.S. Bureau"
programming on networks where audiences most want to see it.

--In Iran, the BBG has achieved success with a multi-platform,
multi-network model. Programs are available on direct-to-home
satellite television, as well as online and on mobile phones, 24
hours a day. VOA Persian and RFE/RL's Radio Farda recently
launched a program collaboration in the form of Radio Farda's
first TV program on VOA's and RFE/RL's satellite channels.

The data for the 2013 audience estimate come from surveys of
adult (age 15+) populations in more than 90 countries conducted
around the world over the past 5 years. More than 80% of these
surveys were conducted with the previous two years.

For further facts and figures as well as information on research
methods, please refer to
http://www.bbg.gov/blog/2013/12/16/u-s-international-media-reach-record-audiences-with-tv-overtaking-radio/

Kim's comment: "U.S. International Media" is the unofficial
"brand" of the various activities of the entities under the
Broadcasting Board of Governors. 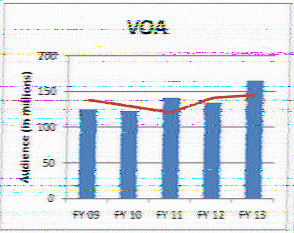 WASHINGTON, DC – Measuring impact, supporting experimentation,
defining a clear vision and motivating staff to drive change were
topics highlighted in a technology panel hosted by the
Broadcasting Board of Governors and featuring Netflix CEO Reed
Hastings.

"The story of Netflix has many parallels to our challenges here,"
said BBG Chair Jeff Shell in introducing Hastings. "It started
out as a physical DVD-by-mail company, and now, Netflix is one
of, if not the largest, streaming media company in the world. The
parallels to the challenges of this agency as we transform, makes
Netflix a great company to try to learn from."

The discussion with industry leaders was part of the BBG's fresh
approach to help the agency navigate media's evolving landscape
and build audience engagement.

Hastings noted, "Having a clear vision of your long-term goal
helps move an organization forward."

He also provided examples of rapidly evolving overseas
technology, saying, "When you look at the rate of smart phone
adoption, it's pretty easy to see that Internet connectivity via
phone devices is going to be almost ubiquitous."

After an opening conversation with Shell, Hastings was joined by
Macon Philips, Coordinator of the State Department's Bureau of
International Information Programs, and Tom Cochran, Chief
Technology Officer at Atlantic Media, for a panel discussion on
managing international media organizations in the digital age.
The panel, moderated by the BBG's Director of Innovation, Robert
Bole, covered a variety of topics from recruiting talent to
utilizing engagement data.

When asked about how to attract and keep talent, Cochran, who
prior to joining Atlantic Media served as Director of New Media
Technologies for the White House, explained that the key is
selling the mission. "Engineers want to solve big problems," he
said. "We have to sell them [engineers] on the mission of media.
We have to sell them on the fact that they can help change the
world, the way news and information is consumed, and that's
important."

Passion for an organization's mission, and the freedom to take
risks, the panel concluded, will also drive internal innovators
to collaborate and try to solve complex problems and overcome
obstacles.

"One of the advantages of being in business rather than
government is that mistakes are encouraged," Hastings added. "In
business, we say fail a lot, fail fast, and figure it out ... our
fundamental mantra for employees is ‘Freedom and Responsibility'.
Our employees can do almost anything, but we educate them on
responsibility."

Macon Phillips, who was instrumental in the development and
implementation of the "We the People" online petition platform as
the then Director of Digital Strategy at the White House, argued
that media and technology are not just tools for informing
people. Instead, media should be thought of as means of engaging
audiences and giving them a stake in the endeavor. Thanks to
digital, audiences are "more powerful. They have access to more
information and they can organize themselves. They don't need
governments and businesses as much." Rethinking strategy for
engagement, therefore, is crucial, he concluded.

Understanding your audience is also a key to adapting
successfully, the panelists agreed. "Without quantitative data,
you can't tell if you are succeeding," Cochran explained. Using
engagement metrics to understand not only who you are reaching,
but how they are interacting with your content is especially
important.

The panel discussion was streamed line online and is available
for viewing at bbg.gov.


Television and Mobile Ubiquitous in Vietnam

Washington, DC — Ninety-eight percent of Vietnamese households
own a television, and nearly nine in 10 have a mobile phone in
their household.

These are among the findings issued today by the Broadcasting
Board of Governors (BBG) and Gallup from a nationally
representative, face-to-face survey of Vietnamese adults about
media use habits in their country. In addition to questions about
programming and media, the survey asked respondents to name
issues that were important to them. Topics that were found to be
most of interest included the weather, environmental concerns,
and territorial issues with China.

"It is vital for us on the Board to have this kind of research,
and this partnership with Gallup," said Governor Michael Meehan
of the BBG. "This is the kind of information we need in order to
prioritize and set policy on how to best connect with people in
more than 100 countries across the world."

Overall, Vietnamese are avid news consumers; nine in 10 (89.8%)
say they access news at least daily, while nearly 94% do so at
least once a week. Access to TV news varies little by gender,
education or urban vs. rural residence. This in part reflects the
finding that televisions are ubiquitous throughout the country,
including in both urban (98.6%) and rural (97.0%) households.

"Vietnam has a vibrant television market," said Jinling Elliott,
Digital Media Research Analyst at the International Broadcasting
Bureau. "People may have a tiny house, they may not have
furniture, but they do have a TV."

Television ownership is nearly universal in Vietnamese
households; however other media are increasingly being used to
also access news and information.

"Vietnam is changing very rapidly. Traditional media remains
dominant, but new media is being pushed forward, especially by
youth and educated populations. We see Google as the number one
non-television source for news for the Vietnamese people," said
Betsy Henderson, Director of Research, Training, and Evaluation
at Radio Free Asia.

But due to restrictive laws pertaining to activity online,
roadblocks remain to engaging with audiences. "People are
cautious about sharing hard news on social media to begin with,
and the Vietnamese government is increasingly proactive in
cracking down when it does happen," Henderson noted.

The data find that nearly nine in 10 (87%) have a mobile phone in
their household, and more than three-quarters of adults (77.6%)
say they personally own a mobile phone. Although most of these
are low-end phones without Internet capability, 27.5% of mobile
owners (21.3% of all Vietnamese adults) do have web-capable
phones. Past-week Internet use was highest with Vietnamese under
age 25 (58%) and those with a post-high school education (60%).
Internet-capable phones are also most likely to be owned by those
under 25.

"What matters to our audiences? The BBG is committed to
supporting free and democratic societies by fostering a free
press and free expression. In order to connect with audiences
around the globe, we have to understand them," said Bruce
Sherman, Director of Strategy and Development for the BBG.

The Voice of America and Radio Free Asia reach Vietnam using a
multi-platform approach, including satellite television, radio,
and multimedia, interactive websites. The Broadcasting Board of
Governors also deploys Internet anti-censorship tools to many
markets, including Vietnam.

The research brief from this event can be found via this page:
http://www.bbg.gov/blog/2013/12/11/television-and-mobile-ubiquitous-in-vietnam/ 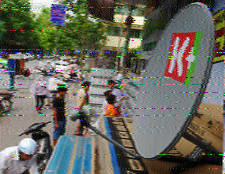 This is VOA Radiogram on the Voice of America.

Thank you for decoding this all-MFSK32 edition of VOA Radiogram.

Here are some pictures of two European stations from the Mediterranean region received in the last days @ 14233 kHz/USB: