Welcome to program 42 of VOA Radiogram from the Voice of America.

Here is the lineup for today's program...

Activists in South Korea, including some North Korean defectors
who were soldiers when they lived in the North, sent
propaganda-loaded balloons over the border into North Korea on
Wednesday, defying Pyongyang's past threats of retaliation
against the launches.

The helium-filled balloons were stuffed with DVDs and leaflets
documenting human rights abuses in the North. They also contained
1,000 U.S. $1 bills and small USB drives loaded with the
Korean-language version of Wikipedia.

Thor Halvorssen of the U.S.-based Human Rights Foundation, which
helped organize the launch, called the balloons "controversial,"
but said it is crucial North Koreans be allowed to access
information the rest of the world already enjoys.

North Korea has lashed out at previous balloon launches,
threatening to shell South Korea in response to such actions,
which it calls deliberate provocation by Seoul that could lead to
war. Seoul maintains that it has nothing to do with the launches.

Some analysts have said North Korean leaders could carry out
another nuclear or long-range missile test in order to build
internal unity. 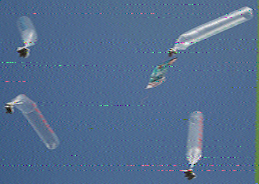 Ten Years of Roving Around Mars

WASHINGTON - The U.S. space agency, NASA, is celebrating the 10th
anniversary of its Mars Exploration Rover Mission (MER), which
began with the arrival of its robotic vehicles Spirit and
Opportunity on the red planet in 2004. The anniversary event,
held at the National Air and Space Museum, in Washington,
featured a panel of NASA scientists discussing the achievements
of the vehicles that have landed on Mars so far, and the future
plans for exploring the planet.

A golf-cart sized vehicle named Spirit landed on Mars on January
4, 2004, while its twin, Opportunity, touched down three weeks
later on the opposite side of the planet.

Although designed to operate for only 90 Martian days (Martian
days are about 40 minutes longer than days on Earth), both rovers
functioned much longer, and provided mission scientists huge
amounts of information about Mars. Geologist John Grant, who was
involved with the mission, said the rovers greatly enhanced
scientists' understanding of the planet's geologic history.

"What we essentially get is a field geologist on Mars. Something
that can move around on the surface, interrogate the rocks, tell
us something about the geologic setting, the environments that
were there in the past, but more specifically - what the role of
water was in shaping those environments," said Grant.

NASA lost communication with Spirit in March 2010, but
Opportunity remains active, sending scientific data after
traveling more than 38 kilometers around the Martian surface. The
most significant discovery was evidence that Mars once had water,
said Steve Squyres, the mission's principal investigator.

"I did not expect that the evidence for liquid water at and below
the surface of Mars was going to be that compelling, that much in
our face, you know, when we first landed," recalled Squyres.

David Lavery of NASA's Mars Exploration Program said the
technologies developed for the Mars rovers are now making their
way into everyday life here on Earth.

"I think we've all heard at this point about the Google
autonomous cars that are now traversing the highways. The
technology that is used onboard there, in fact some of the people
who developed that technology, have common roots back in
technologies that were actually flown on the Mars rovers," said
Lavery.

In August 2012, NASA landed the rover Curiosity on Mars. The size
of a small car, it is powered not by batteries but a small
nuclear reactor, which should allow it to operate for years.
Curiosity will be joined by another rover in 2020, as the U.S.
space agency looks ahead to an eventual visit by humans.

Astronomers have discovered what they're saying is the first
planet outside our solar system, or exoplanet, with the same mass
as Earth. But although its weight is similar to Earth, the planet
is 60 percent larger in diameter.

KOI-314c, which likely has a thick gaseous atmosphere, orbits a
dim red dwarf star and is about 200 light-years away. The
astronomers said it circles its star every 23 days and that its
temperature is around 220 degrees Fahrenheit, too hot for life as
we know it.

"This planet might have the same mass as Earth, but it is
certainly not Earth-like," says David Kipping of the
Harvard-Smithsonian Center for Astrophysics (CfA), lead author of
the discovery. "It proves that there is no clear dividing line
between rocky worlds like Earth and fluffier planets like water
worlds or gas giants."

KOI-314c is only 30 percent denser than water. This suggests that
the planet is enveloped by a significant atmosphere of hydrogen
and helium hundreds of miles thick. It might have begun life as a
mini-Neptune and lost some of its atmospheric gases over time,
boiled off by the intense radiation of its star.

Weighing such a small planet was a challenge. Conventionally,
astronomers measure the mass of an exoplanet by measuring the
tiny wobbles of the parent star induced by the planet's gravity.
But this method is extremely difficult for a planet with Earth's
mass. The previous record holder for a planet with a measured
mass (Kepler-78b) weighed 70 percent more than Earth.

To weigh KOI-314c, the team relied on a different technique known
as transit timing variations (TTV). This method can only be used
when more than one planet orbits a star. The two planets tug on
each other, slightly changing the times that they transit their
star.

Using this technique, the astronomers actually found two planets.
The second planet in the system, KOI-314b, is about the same size
as KOI-314c but significantly denser, weighing about 4 times as
much as Earth. It orbits the star every 13 days.

The discovery was serendipitous, as the team was looking for
exomoons, not exoplanets.

"When we noticed this planet showed transit timing variations,
the signature was clearly due to the other planet in the system
and not a moon. At first we were disappointed it wasn't a moon
but then we soon realized it was an extraordinary measurement,"
said Kipping.

Kipping presented this discovery, which was based on data from
NASA's Kepler spacecraft, at the 223rd meeting of the American
Astronomical Society.

This is VOA Radiogram in MFSK64L...

The discovery of a three-star system may yield clues that help
scientists define the true nature of gravity.

The system, which consists of two white dwarf stars and a
superdense pulsar, all packed within a space smaller than Earth's
orbit around the Sun, could help resolve outstanding problems
with Einstein's Theory of General Relativity.

"This triple system gives us a natural cosmic laboratory far
better than anything found before for learning exactly how such
three-body systems work and potentially for detecting problems
with General Relativity that physicists expect to see under
extreme conditions," said Scott Ransom of the National Radio
Astronomy Observatory (NRAO).

Using the exact timing of the pulsar's lighthouse-like beams of
radio waves, astronomers were able to calculate the geometry of
the system and the masses of the stars with unparalleled
precision.

The pulsar, which is 4,200 light-years from Earth, spins about
366 times per second. Pulsars are formed when a massive star
explodes as a supernova and its remains collapse into a
superdense neutron star, some of its mass is converted into
gravitational binding energy that holds the dense star together.

Scientists say that the system could offer the best opportunity
to discover a violation of a concept called Equivalence
Principle. This principle states that the effect of gravity on a
body does not depend on the nature or internal structure of that
body.

The most famous experiments illustrating the equivalence
principle are Galileo's reputed dropping of two balls of
different weights from the Leaning Tower of Pisa and Apollo 15
Commander Dave Scott's dropping of a hammer and a falcon feather
while standing on the airless surface of the Moon in 1971.

"While Einstein's Theory of General Relativity has so far been
confirmed by every experiment, it is not compatible with quantum
theory. Because of that, physicists expect that it will break
down under extreme conditions," Ransom explained. "This triple
system of compact stars gives us a great opportunity to look for
a violation of a specific form of the equivalence principle
called the Strong Equivalence Principle," he added.

"By doing very high-precision timing of the pulses coming from
the pulsar, we can test for such a deviation from the strong
equivalence principle at a sensitivity several orders of
magnitude greater than ever before available," said Ingrid Stairs
of the University of British Columbia. "Finding a deviation from
the Strong Equivalence Principle would indicate a breakdown of
General Relativity and would point us toward a new, correct
theory of gravity," she added.

"This is a fascinating system in many ways, including what must
have been a completely crazy formation history, and we have much
work to do to fully understand it," Ransom said.

DETROIT, MICHIGAN - U.S. automakers have much to celebrate at this year's North American International Auto Show in Detroit.

Fueled by growing sales and increased production, the industry has made a dramatic turnaround since hovering on the brink of collapse less than five years ago.

Facing bankruptcy in 2009, Chrysler was grappling with the fate of its assets, including the Sterling Heights Assembly Plant where Charles Archard worked.

"Me and my wife both worked in the plant," Archard said. "She took the buyout. I stayed there. But there was a 50/50 chance that it could have went bankrupt. I
took that chance."

It paid off. Chrysler not only reversed its decision to close Sterling Heights, but also added another shift. At this year's North American International Auto
Show, the company announced that workers like Archard will soon be building a new mid-size sedan at the plant, which will offer job security for the foreseeable
future.

"And then we found out a billion dollars is going to be put into the plant for new vehicles and everything, so it was great," Archard said.

Democratic Senator Debbie Stabenow represents the state of Michigan and says the Chrysler announcement is an example of how the U.S. auto industry's success is
reflected in this year's auto show.

"We're back. This auto industry, the home team from Michigan, is back," Stabenow said. "Today we are seeing not only fuel economy, but great engineering, design,
technology."

One example of the change was evident at an event for General Motor's Chevrolet brand. Instead of showcasing smaller, fuel-efficient cars, the automaker rolled out
a new version of the snazzy Chevrolet Corvette, a high performance car that consumes a lot of gas and carries a high price tag.

"I think you're going to find that we definitely are profiling our newest, latest, greatest, but that doesn't mean that we don't have a lot of emphasis on fuel
efficiency across the board," said Christi Landy of General Motors.

In fact, Landy says sales of fuel-efficient compacts like the Chevrolet Spark and Sonic are up 10 percent this year from last year.

At a news conference for Chevrolet's competitor, Ford, CEO Alan Mulally predicted an even greater market for such vehicles.

"We expect small vehicles to represent more than half of our total global sales by the end of this decade," Mulally said, "with nearly one third of all of our
sales coming from Asia Pacific."

That's good news for Ford workers. But the state of Michigan, home of the U.S. auto industry, still has one of the highest unemployment rates in the country about
9 percent.

While some jobs are returning as the industry rebounds, it's only a fraction of the number of jobs lost during the region's long economic decline. 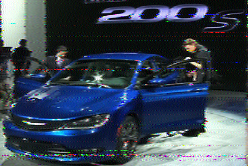 Thanks to colleagues at the Edward R. Murrow transmitting station
in North Carolina.


Thank you for decoding the modes on VOA Radiogram

Here are some pictures of two radio amateurs received yesterday.