Welcome to program 43 of VOA Radiogram from the Voice of America.

Here is the lineup for today's program (all centered on 1500 Hz
except where indicated):

The International Monetary Fund is predicting the world economy
will advance at a faster pace this year.

IMF economic counselor Olivier Blanchard said Tuesday in
Washington that the global economy will grow by 3.7 percent in
2014, up from last year's 3 percent rise. He said the world's
advanced economies will grow by 2.2 percent this year, with
emerging market and developing economies moving ahead by 5.1
percent.

"The basic reason behind the stronger recovery is that the brakes
to the recovery are progressively being loosened. The drag from
fiscal consolidation is diminishing, the financial system is
slowly healing, and uncertainty in various dimensions, is
decreasing."

Still, Blanchard said global recovery is "weak and uneven." He
said economic improvement is stronger in the United States than
in Europe. He said the core northern countries in the 18-nation
euro currency bloc and Great Britain are advancing faster than in
southern Europe, which he described as a "worrisome part of the
world economy."

The IMF predicted 2.8 percent growth in the U.S. this year,
although many economists think the figure will top 3 percent.
Blanchard said the rate of Japan's economic growth will be 1.7
percent for the second year in a row.


VOA Radiogram continues with two simultaneous MFSK16
transmissions, one centered on 700 Hz and the other on 2000 Hz...

This is VOA Radiogram in MFSK64.

The next VOA News story is in Flmsg format...

WASHINGTON - A decision this week by a U.S. federal appeals court to strike down so-called net neutrality may not only have major ramifications for Internet users
in the United States.

It could also have ripple effects overseas.

Experts say the ruling could be a boon to other countries if innovation is hampered in the U.S.

But it could be bad news, too, for Internet users outside the U.S. because other governments could adopt similar rules and regulations.

<a href="http://www.cadc.uscourts.gov/internet/opinions.nsf/3AF8B4D938CDEEA685257C6000532062/$file/11-1355-1474943.pdf">The ruling</a> by the United States Court
of Appeals in the District of Columbia struck down a Federal Communications Commission's (FCC) order from 2010, which imposed net neutrality on broadband Internet
service providers (ISPs).

The FCC regulates interstate and international communications by radio, television, wire, satellite and cable" in the U.S.

According to the 2010 FCC order, ISPs "shall not block lawful content, applications, services or non-harmful devices, subject to reasonable network management." It
also said ISPs "shall not unreasonably discriminate in transmitting lawful traffic over a consumer's broadband Internet access service."

Opponents of the ruling say the decision could lead to an Internet that is vastly different from what American surfers are used to today, particularly because ISPs
could charge extra for certain content or slow down the content delivery of competitors.

Verizon, one of the larger ISPs, led the challenge to the net neutrality order and welcomed the court ruling.

"One thing is for sure: today's decision will not change consumers' ability to access and use the Internet as they do now," wrote Verizon's General Counsel and
Executive Vice President - Public Policy, Law & Security Randal Mich in a <a href="http://publicpolicy.verizon.com/blog/entry/verizon-reiterates-its-commitment-to-
the-open-internet">blog post</a>.

"The court's decision will allow more room for innovation, and consumers will have more choices to determine for themselves how they access and experience the
Internet," he wrote. "Verizon has been and remains committed to the open Internet that provides consumers with competitive choices and unblocked access to lawful
websites and content when, where, and how they want. This will not change in light of the court's decision."

The court's decision is not the final word, however.

FCC Chairman Tom Wheeler said the commission could appeal the court ruling. Also, the FCC could adopt new rules that would reclassify broadband providers. The U.S.
Congress could too get involved and change the 1996 telecommunications law to give the FCC greater regulatory powers over broadband Internet.

What the outcome will mean for U.S. Internet users as well as those outside the country is uncertain.

"This could have several impacts internationally," said Jennifer Yeh, a policy counsel at Free Press, a Washington-based public interest group which advocates for
an open Internet. "Content companies overseas who are trying to reach U..S Internet users may not be able to, if an ISP decides to block them."

Still, the ruling could be a boon to startups outside the United States.

Andrew McDiarmid, a senior policy analyst for the Center for Democracy and Technology, said the lack of net neutrality could deter American innovation as startups
could face a tougher time getting to market as "ISPs can cut deals that distort the competitive environment."

"If innovators or startups here are disincentivized to create new services or applications, that may affect users abroad by limiting supply of new content and
innovations," said Yeh. "Or, we could see those same innovators and investment dollars move for better opportunities elsewhere."

The world is watching.

Neelie Kroes, the European Union's commissioner for the digital agenda <a href="https://twitter.com/NeelieKroesEU/status/423418068161687552">tweeted</a> "Maybe I
shd [should] invite newly disadvantaged US startups to EU, so they have a fair chance."

Many experts believe the biggest effect of the lack of net neutrality in the U.S. to non-Americans would be the example it sets.

"Other countries may be watching to see how this plays out and may decide to follow suit, which could mean fewer protections for Internet users abroad," said Yeh.

McDiarmid said the ruling will likely ripple across the globe.

"I think it's a case that the U.S. remains a model for Internet policy for the world," he said. "Not having it here may make it less likely to have it in other
places." 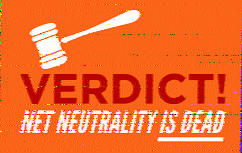 According to the China Internet Network Information Center
(CNNIC), which "operates and administers country code top level
domain of .cn and Chinese domain name system," the cause was due
to malfunctions with the servers that manage the .cn name system.

China's state run news service, Xinhua, hinted that the problem
could have been caused by hackers because Chinese web surfers
were rerouted to an IP address associated with Dynamic Internet
Technology (DIT), a company that provides, among other things,
software to help Chinese web surfers get around the co-called
Great Firewall.

The company was founded by Bill Xia, a practioner of Falun Gong,
a banned group in China. Xia emigrated to the United States and
started DIT. The Voice of America is a client of DIT.

The latest outage was the second major disruption in five months.
Last August, a denial-of-service attack caused large portions of
the Chinese Internet to go dark in what in what Beijing called
the "largest ever" hack attack on Chinese sites.

"China Internet Network Information Center no doubt learned some
valuable lessons as a result of the August 2013 outage, where
they found that it was internal Chinese hacking competition which
disrupted the .cn domain," said Christopher Burgess, CEO of
Prevendra, Inc., an Internet security firm.

"In this instance, speculation of a 'foreign hand' will be high,
as the outage was caused by Domain Name Service changes which
rerouted traffic to a company, Dynamic Internet Technology, well
known for their anti-censorship web services tailored to evade
the 'The Great Firewall of China'," he said.

Chinese Foreign Ministry spokesman Qin Gang said during his
regular news briefing that he "noted" reports of Falun Gong
involvement in the hacking, but said he did not know who was
responsible.

"I don't know who did this or where it came from, but what I want
to point out is this reminds us once again that maintaining
Internet security needs strengthened international cooperation.
This again shows that China is a victim of hacking."

However some think the problem stems from the Great Firewall
itself.

"This is the result of China's DNS hijacking system," said Xia in
an email. "This system is part of China's Great Firewall."

He said the system is used to block domains the Chinese
government disapproves of.

"This time, the DNS hijacking system targeted all domains
instead, for a few hours, thus the break down," he said.

Greatfire.org, a website that monitors web censorship in China,
also said theories that DIT was behind the outage had little
merit.

Instead, the website said the outage was likely caused by what
they call "DNS poisoning," which is used to block users from
certain addresses. In essence it scrambles the numbers during the
process of converting a website name into IP numbers, sending
people to the wrong website.

"One hypothesis is that [the Great Firewall] might have intended
to block the [DIT] IP but accidentally used that IP to poison all
domains," the group wrote in a blog post.

"The bogus response," the group wrote, "could only have been
returned by [the Great Firewall]."

Thanks to colleagues at the Edward R. Murrow shortwave transmitting station in North Carolina.

Here are some pictures of two radio amateurs received in the last days: