Welcome to program 57 of VOA Radiogram from the Voice of America.

LOS ANGELES - The Queen Mary, an ocean liner that once sailed the
North Atlantic, is now permanently berthed in Long Beach,
California, where it's a tourist attraction and hotel. In one of
the rooms aboard the ship, the tradition of ship-to-shore
wireless operations is continued and visitors are introduced to
the hobby of ham radio.

A young visitor recently got an introduction to Morse code, the
system of dots and dashes once used for wireless communication.
Amateur radio operators, called "hams," still use it today.

The Queen Mary was the pride of the Cunard Line after its 1936
launch, and is now a popular tourist attraction.

"And not only did they carry several transmitters for
transmitting the ship's business, they also, even in 1936, had
radio-telephone service," said Hoard.

Today, volunteers from the local amateur radio club show off old
equipment and operate new gear, as they talk to hams around the
world.

"Just chit-chat, back and forth, some of them for hours at a
time, many on voice, some of them even on Morse code," said
wireless room manager David Akins.

Volunteer Kurt Freitag said the wireless station is popular with

"When we get out there and say, this is W6RO, our call letters,
we get a pile up. People go, that's the Queen Mary, and they all
jump in, talk to me, talk to me, no talk to me," said Frietag.

Ham operators help with communications in disasters, from
earthquakes and hurricanes to winter ski accidents.

The man who helped create the ship's ham radio operation, Nate
Brightman, said helping in emergencies is an important part of
the hobby.

"That's the big reason that the government is so nice to amateur
radio operators and gives us all these frequencies to use,
because we serve the public. It's a hobby and it's a lot of fun,
but it's also very valuable to the country," said Brightman.

These volunteer radio operators are continuing the heritage of
seaborne communication on board the Queen Mary, reaching out to
visitors to the ship and radio enthusiasts worldwide. 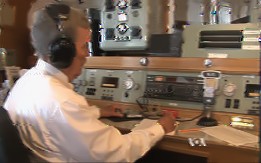 'Cloudsource to Ukraine' to Boost Country's IT Sector

WASHINGTON - Even before the current standoff with Russia, the
nation of Ukraine has been in dire need of economic expansion.

Now, some leaders in Internet technology say they have a solution
that could help lift Ukraine economically, and at the same time,
knit it more closely to Europe and the U.S.

Called "Cloudsource to Ukraine," the plan is designed to convince
major European and American companies to move their IT operations
to Ukraine through the Internet.

"This is one of the booming sectors in Ukraine," Pavlo Sheremeta,
Ukraine's minister of economic development, said earlier this
month. Sheremeta said his goal is to turn the beleaguered
Ukrainian nation into "the Silicon Valley of Europe."

Global IT outsourcing is a thriving economic field, generating an
estimated $250 to $300 billion dollars of activity each year.
Historically, India and Brazil have been among the leaders in the
industry, due to their large, well-educated populations and
extensive IT infrastructure.

But Ukraine has these assets as well, said Alex Konanykhin, who
heads the IT outsourcing firm Transparent Business.

Konanykhin's firm is assisting Ukrainian officials in making the
case that Ukraine is a good place to do business. Ukraine has
long been known for having a very tech-savvy, young population.

Konanykhin believes multi-national firms can outsource their IT
needs to Ukraine at less cost than well-established locations
like India.

But with parts of Ukraine under siege from pro-Russian
separatists, that could prove a difficult sell, analysts say.

In general, the conflict between Kyiv and Russian-leaning
separatists has destabilized Ukraine's economy as a whole. The
threat of possible military action by Russia doesn't help
matters.

Jeffrey Car, CEO of the IT security firm Taia Global, said Russia
installed and still may have control over large portions of
Ukraine's data and communications networks.

"After the break-up of the Soviet Union, Russia made a point to
organize and install the communications systems of the newly
independent states," Carr said.

"They pretty much own much of Ukraine's Internet," he said. "If
they wanted to shut it down, or just significantly slow it up, it
would be no problem."

Still, Ukraine - unlike Georgia in 2008 for example - doesn't run
its electronic traffic through lines and servers to Russia. Much
of Western Ukrainian data traffic flows through lines coming from
Europe, which could prove much harder to shut down.

And analyst Konanykhin said that ultimately, economics will make
the case for Ukrainian outsourcing, not geo-politics.

"Many business leaders are disturbed with Putin threatening
political and economic stability of the world, but they don't
know how they can influence the situation," he said.

"Our message is that they can help simply by selecting Ukraine
for their IT outsourcing needs," he said. "They can increase
profits and support democracy at the same time.

Image: Logo of SupportUkraine.us, which advocates the outsourcing
of IT jobs to Ukraine...

50th Anniversary of a Language That Changed the World

May 1 marks the 50th anniversary of a special computer language
aimed at enabling college students not trained in mathematics to
use computers. The birth of BASIC is now seen as a major step
toward the era of personal computers.

50 years ago, computers were owned primarily by governments,
businesses and universities, operated by programmers who wrote
pages of instructions that consisted of mathematical formulas.

Hoping their school's computer could be used by students from
other departments, two mathematics professors at Dartmouth
College, John Kemeny and Thomas Kurtz, developed a simpler set of
instructions. It was called Beginner's All-Purpose Symbolic
Instruction Code, or BASIC.

"We deliberately invented a language that was almost devoid of
many of the technical details that were present in other
languages," said Kurtz.

BASIC translated English commands, such as IF…THEN, or GO...TO,
into the numerical language computers could understand.

Kurtz said the response was overwhelming.

"Not only our students loved getting onto the computer any time
they wanted to, for whatever purpose they wanted to, but even the
faculty got interested. Of course not everybody, but many of
them," he said.

That happened just as computers became fast enough to execute
many commands at the same time, says Peggy Kidwell, Curator of
Mathematics at the Smithsonian National Museum of American
History.

"Now, that whole notion that anybody could run a computer
permeates the whole world. And I would say that is not the
immediate legacy of BASIC but it is a part of what was involved
in building up on BASIC," said Kidwell.

Kurtz and Kemeny released BASIC to the public, free of charge, so
the language quickly became widespread. Kurtz says they hoped it
would solve what they saw as a major upcoming problem.

"That is to say, the computer is going to be very important in
the world and most people didn't know anything about it because
it was in the hands of experts," he said.

The rapid development of computers was followed by many improved
versions of BASIC... and other easy to use languages.

Today, BASIC is used only by enthusiasts, but personal computers
owe their existence to the first programing language that anyone
could speak.

A group of U.S. lawmakers is seeking to overhaul the country's
international news and programming broadcasts, saying they should
be consistent with and supportive of the country's foreign policy
objectives.

House Foreign Affairs Committee Chairman Ed Royce, a California
Republican, says the body that oversees U.S. foreign broadcasting
operations, the Broadcasting Board of Governors, is "badly
broken" and should be replaced.

Voice of America is overseen by the BBG. If the new legislation
passes, it would be governed by a new supervisory body, to be
called the U.S. International Communications Agency.

Royce said Wednesday the reorganization is necessary to bolster
U.S. broadcasting in the face of growing competition from
Russian, Chinese and other foreign international broadcasters.

VOA Director David Ensor said the organization does not comment
on pending legislation. "VOA continues to carry out its important
mission providing reliable, accurate and comprehensive news. It
currently reaches an estimated 164 million people around the
world each week."

Royce and the Democratic and Republican lawmakers co-sponsoring
the legislation are seeking to consolidate some half-dozen U.S.
international broadcasting agencies into just two. Their
legislation says VOA should focus on coverage of the United
States and international developments that affect the U.S.

The bill said VOA should air newscasts that promote and are
consistent with "the broad foreign policies of the United
States."

Currently, VOA operates under a 1976 charter that requires that
it serve as a "consistently reliable and authoritative source of
news" that is "accurate, objective and comprehensive." The
charter also requires that VOA present a balanced and
comprehensive projection of significant American thought and
institutions.

The measure also says U.S.-funded broadcasting overseas should
not duplicate the activities of American commercial broadcasters.

The legislation calls for the existing BBG governors to complete
their terms as governors of the new International Communications
Agency. However, a new chief executive would be appointed to
oversee the agency's day-to-day operations.

The three U.S. broadcasting arms that target specific regions of
the world -- Radio Free Europe/Radio Liberty, Radio Free Asia and
the Middle East Broadcasting Network -- would be merged into a
new "Freedom News Network." The network would focus on providing
uncensored local and regional news and analysis to countries
where free media do not exist.

The bill would leave VOA as "the flagship brand" of the new
agency, offering "accurate, objective and comprehensive" news of
the United States, its policies, its people and international
developments of interest to the U.S. The Office of Cuba
Broadcasting, which operates Radio and TV Marti, would continue
its current activities "within" VOA.

The Foreign Affairs Committee started consideration of the
reforms Wednesday, but the overall fate of the legislation is
uncertain. Even if it is passed in the House of Representatives,
it would have to be approved by the Senate and signed by
President Barack Obama.

Over the years, numerous U.S. officials have sought to reorganize
the government's international broadcasting operations, often
debating whether the United States should provide an independent
source of news to countries without a free press or be more an
arm of U.S. diplomatic efforts.

One critic was former Secretary of State Hillary Clinton, who is
considering whether to seek the Democratic nomination for
president in 2016. Before she left office in early 2013, she
described the Broadcasting Board of Governors as "practically
defunct in terms of its capacity to tell a message around the
world."

Here are some pics of F6ATH  (Henri Cathala, Narbonne, France) received in the last days on 14233 kHz: