The prize is a Tecsun PL-660 LW/MW/SW/FM/Air receiver.

See the contest rules at...


Welcome to program 58 of VOA Radiogram from the Voice of America.

Many college students have long abandoned taking class notes by
hand in favor of typing on laptop or tablet computers. But
scientists from Princeton University and the University of
California say that method is less effective.

According to a study published in the journal Psychological
Science, taking notes by hand is much better for long-term memory
of conceptual information.

Computers may be distracting because they offer opportunities for
quick exchanges of messages, checking sports results, browsing or
even shopping.

Even without Internet access, though, scientists say computers
may be harming academic performance.

Students who type notes tend to take down what the professor says
verbatim, without thinking about what they are writing. Although
these electronic notes contained more words, scientists say it
leads to "mindless transcription."

Those taking notes long-hand need to process the information they
hear so they can summarize it in fewer words.

In the study, students listened to a lecture, then took a test.
Those taking notes by typing were as good at recalling facts as
students taking notes by hand, but they did significantly worse
when they were asked conceptual questions.

Scientists acknowledge that students probably will not abandon
their laptops and tablets in class, but suggest some of the
available technologies for writing notes by hand on computer
screens might be an efficient compromise. 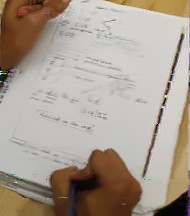 The number of Internet users worldwide continues to rise,
according to the United Nations' telecommunications agency, which
says there will be almost three billion users by the end of this
year. Two-thirds of those users will be in developing countries.

In a statement released Monday, the International
Telecommunication Union, or ITU, also says the number of
mobile-cellular subscriptions will be even higher, reaching
almost seven billion by the end of 2014.

At the same time, the number of fixed-telephone subscribers
continues to fall, with the ITU predicting there will be 100
million fewer landlines this year than in 2009.

The developing world is pushing up the number of mobile-cellular
subscriptions, mostly in the Asia-Pacific region; but, the ITU
says the global growth rate of 2.6 percent indicates that the
cellular phone market may be reaching its peak.

The ITU predicts that by the end of this year, 44 percent of
households worldwide will have Internet access. It says nearly
one-third of households in developing nations will have an
Internet connection, compared with 78 percent in the developed
world.

The agency's statistics are considered to be the most reliable
and impartial and are used by many government agencies and
private companies.

This is VOA Radiogram on the Voice of America


Earth Bacteria Could Hitchhike to Mars

Forget little green Martians invading Earth. Scientists are now
concerned bacteria from Earth may be hitching rides to Mars on
the many probes that have landed on the Red Planet.

According to NASA, the invading organisms "have the potential to
contaminate other celestial bodies, making it difficult for
scientists to determine whether a life form existed on another
planet or was introduced there by explorers."

In order to reduce the potential of contamination, scientists say
they need to better understand which kinds of organisms could
survive the flight. Recent studies show that certain microbes are
tougher than expected, with the ability to survive an
interplanetary journey.

"If you are able to reduce the numbers to acceptable levels, a
proxy for cleanliness, the assumption is that the life forms will
not survive under harsh space conditions," explains Kasthuri J.
Venkateswaran, a researcher with the Biotechnology and Planetary
Protection Group at NASA's Jet Propulsion Laboratory and a
co-author of three papers on the topic in a statement.

NASA said spore-forming bacteria could present the greatest risk
as they can "withstand certain sterilization procedures and may
best be able to survive the harsh environments of outer space or
planetary surfaces."

Spores from Bacillus pumilus SAFR-032 are proving to have the
ability to resist the techniques to clean spacecraft, like
ultraviolet radiation and peroxide treatment.

These spores, NASA said, were able to survive 30 minutes in a
simulated Martian environment, whereas normal spores only survive
30 seconds.

Another test was done in space when the spores were exposed to
outer space for 18 months aboard the European Technology Exposure
Facility (EuTEF), a test facility mounted outside the
International Space Station.

"After testing exposure to the simulated Mars environment, we
wanted to see what would happen in real space, and EuTEF gave us
the chance," says Venkateswaran. "To our surprise, some of the
spores survived for 18 months."

NASA said the surviving spores showed increased levels of
proteins associated with UV radiation resistance, as well as
higher resistance when "revived and re-exposed on Earth."

Another experiment showed that the spores of Bacillus pumilus
SAFR-032 and another spore-forming bacteria, Bacillus subtilis
168 were also very tough. They were dried on pieces of spacecraft
and subjected for 1.5 years to the vacuum of space as well as
various types of extraterrestrial radiation and temperature
changes on the EuTEF.

The spores were also exposed to a simulated Martian atmosphere on
EuTEF.

NASA said most of the organisms didn't survive, but that when UV
rays were filtered out and the samples kept in the dark, 50
percent or more of the spores survived.

That, NASA says, "makes it likely that spores could survive a
trip on a spacecraft to Mars if they are sheltered against solar
radiation, perhaps in a tiny pocket of the spacecraft surface or
underneath a layer of other spores."

A final study put rock-colonizing cellular organisms in the EuTEF
for 1.5 years, to test if living organisms might move from one
planet to another on rocks, a process known as lithopanspermia.

In another finding, organisms from Earth that live in extreme
conditions proved they might be able to survive the arduous
journey through space. However, they weren't able to replicate
exact conditions as such a journey would possibly last up to
millions of years.

The research, scientists hope, will lead to methods of minimizing
the risk of microbial hitch hikers. Furthermore, they would help
identify the kind of microbes that could originate on Earth.


Image: Electron micrographs of Bacillus pumilus SAFR-032 spores
on aluminum before and after exposure to space conditions....

Next is a news item from VOA Spanish...

Broadcasting Board of Governors press release
May 2, 2014

To commemorate World Press Freedom Day (May 3), reporters from
around the globe, leaders of U.S. international media, and other
staff of the Broadcasting Board of Governors today released an
interactive presentation containing video testimonials that
underscore the importance of press freedom.

BBG-supported news and information programs reach an estimated
206 million people each week in more than 100 countries where the
media face significant restrictions.

"Our audiences rely on our journalists for timely and accurate
coverage of events affecting them,' said BBG Chairman Jeff Shell.
"And given the diminished state of media freedom today, our
mission is more important than ever. I applaud the men and women
of U.S. international media for speaking out on this occasion,
and for their hard work every day."

In their testimonials, staff for the Voice of America, Radio Free
Europe/Radio Liberty, the Martís, Radio Free Asia and Middle East
Broadcasting Networks speak from experience about the impact of
media freedom, and the heads of the networks underscore the
importance of safeguarding journalists and promoting freedom of
information.

In a just-released report, the non-governmental organization
Freedom House found that global press freedom has fallen to its
lowest level in a decade. Their 2013 Press Freedom Rankings
reveal that only one person in seven lives where the media are
free. Despite positive developments in several countries,
particularly in sub-Saharan Africa, Freedom House indicated
declines in every region of the world, particularly in the Middle
East, Ukraine and East Africa. The trend toward repression has
included increased physical attacks on reporters, censorship and
intimidation.

The BBG promotes media freedom through the unbiased news coverage
of its networks, programs to combat censorship on the Internet,
journalism training programs and partnerships with local
affiliates. Information on threats that BBG journalists face and
repressive tactics they encounter in countries that lack press
freedom can be found at
http://www.bbg.gov/broadcasters/threats-to-journalism/


Thank you for decording the modes on VOA Radiogram.