NASWA, the North American Shortwave Association, has shared
information about shortwave radio since 1961. We focus on
domestic and international broadcasts on shortwave frequencies
between 2 and 30 MHz. We are the premiere organization in North
America for shortwave listeners and DXers.

Thanks to The Mighty KBC


Welcome to program 59 of VOA Radiogram from the Voice of America.


Looking ahead: VOA Radiogram for the weekend of 31 May and 1 June
will include an image in the EasyPal (DRM) format. Please
download the EasyPal software from vk4aes.com. For practice,
EasyPal images are often transmitted on 14233 kHz.

The monument, located in the heart of the city's National Mall,
was shaken by the August 23rd earthquake, whose epicenter was
about 145-kilometers southwest of Washington. Falling mortar and
pieces of stone struck visitors inside causing minor injuries.
Everyone was safely evacuated.

A post-quake assessment revealed cracks, spalls (breaks or
splintering) and displacement of stones and joints, forcing its
closure to the public. The structure was covered by scaffolding
as it underwent repairs at a cost of $15 million. Half the repair
cost was paid for by businessman and philanthropist David
Rubenstein.

"Most of the earthquake damage that this building sustained back
in 2011 was at the upper levels of the monument, and that
required a very elaborate scaffolding system and expert stone
masons, who could come and do the repairs here," said James Perry
of the National Mall and Memorial Parks, an administrative unit
of the National Park Service, which oversees the capital city's
national memorials.

New exhibits have been installed at the Washington Monument and
visitors can once again ride an elevator to the top, the highest
point in the federal city.

Construction of the monument, a tribute to George Washington, the
nation's first president, began as a private venture in 1848. The
construction faced many difficulties. First, funds ran out, and
later on the Civil War interrupted building efforts until
Congress authorized resumption of construction in 1876. The
monument was finally completed in 1884 and dedicated the
following year.

It was the world's tallest structure until completion of the
Eiffel Tower in Paris in 1889, and attracts about 800,000
visitors a year. 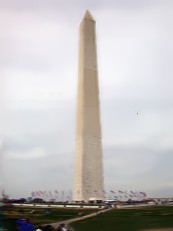 Just when it looked like electronic components could not get
smaller, scientists in the United States announced that they have
created the first transistor that - for all practical purposes -
has only two dimensions. Such transistors could someday be used
for building flexible high-resolution displays that need very
little energy.

An atom is only about one-tenth of a billionth of a meter wide,
so a layer of any material that thin may be considered
two-dimensional.

Two groups of scientists - at Argonne National Laboratory outside
Chicago and at the University of California Santa Barbara -
report they have successfully built transistors only a few atoms
thick, with materials that have better electronic properties than
silicon.

According to Dimitris Ioannou, an electrical engineering
professor at George Mason University outside Washington, the
traditional transistor has been refined as much as it can be, so
researchers have been looking for new materials with important
advantages, such as transparency and flexibility.

"If the layers are very thin the transistor can become flexible,
so it doesn't have to be rigid, like it would be in a silicon
chip. So people can think of applications like wearable
electronics, like, you know, television screens and other
things," said Ioannou.

These new transistors can also carry higher current and switch
much faster, which is important for high-definition screens.

Ioannou says the achievement could have far-reaching
consequences.

"This is the first time every layer is a single [atom] layer,
more or less, and that's the novelty of it. Now, how good and how
useful it will be, it's still in research phase, but it
certainly is an advance," he said.

Scientists say there is no good method for printing a large
number of these new transistors on the same substrate, but this
proof-of-concept shows that someday it may be possible.

Image: Concept art of a schematic view of an AB-stacked graphene
film... 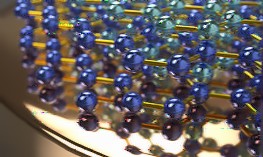 
This is VOA Radiogram from the Voice of America

The first private firm to successfully launch a reusable cargo
space capsule, Space X, says its reusable booster rocket --
Falcon 9 -- will dramatically lower the cost of launching space
vehicles. NASA and the French space agency CNES, however, say it
may not be a good idea.

Speaking at a recent space conference in Paris, officials from
NASA and CNES said their experience in reusing booster rockets
shows technical and economic obstacles are too costly.

NASA Deputy Associate Administrator Dan Dumbacher said his agency
found that the space shuttle's main engines required so much
refurbishment after flight that it simply was not worth trying.

In April, Space X successfully landed its Falcon 9 booster rocket
in the Atlantic but it eventually was lost due to a strong storm.
The company now plans another attempt to soft land the rocket in
water and later even on dry ground.

Space X says refurbishing the rocket after landing in water may
take two months, while doing so after landing on ground may take
only a day.

A substance found in the shells crustaceans and parts of insects
could provide the world with an abundant and environmentally
friendly way to replace many plastics.

It's called chitosan, a resilient form of chitin, which
researchers at Harvard's Wyss Institute for Biologically Inspired
Engineering say is the "the second-most abundant organic material
on Earth."

Chitin is a tough polysaccharide found in the shells of
crustaceans.

After Wyss announced its progress making chitosan-based materials
in March, they were approached by a variety of companies and
entrepreneurs eager to learn about it and explore possible
commercial uses, said Javier Fernandez, a lead researcher on the
project.

One example, a simple drinking cup, could be made from about 200
grams of shrimp shells, about a handful, Fernandez said.

To put that in perspective, Fernandez said that one species of
plankton-sized crustaceans, the copepod, is estimated to produce
billions of tons of chitin each year.

"That means that they have produced in the last 12 months roughly
the same amount of chitin than the worldwide plastic production
since 2009," he said in an email.

According to the Wyss Institute, humans manufacture about 34
million tons of plastic waste per year, recycling a mere seven
percent. The remaining 93 percent ends up in landfills and
oceans.

Wyss said that plastic in landfills could take up to 1,000 years
to degrade, and that there is an estimated 100 million tons of
plastic swirling around in the world's oceans.

"There is an urgent need in many industries for sustainable
materials that can be mass produced," Wyss Director Donald E.
Ingber said in a statement. "Our scalable manufacturing method
shows that chitosan, which is readily available and inexpensive,
can serve as a viable bioplastic that could potentially be used
instead of conventional plastics for numerous industrial
applications."

While there are several bioplastics on the market, they are
commonly made of cellulose, a plant-based material. These, Wyss
researchers say, have only been made into "simple containers for
food or drinks."

While Harvard researchers have made cups and food containers from
chitosan, they say it could also be used to make trash bags,
grocery bags, packaging materials and diapers that are
biodegradable and release nutrients for plants.

Fernandez said shrimpers around the world, particularly in
Vietnam, India and Honduras, are always looking for economically
viable ways to discard shrimp cells.

Chitosan-based material could make the waste another revenue
source, said Fernandez, adding that would be an important step in
mass producing chitosan.

Currently, the majority of shrimp shells are discarded, used in
fertilizers, or for cosmetics and dietary supplements.

Finally, those who suffer from shellfish allergies need not worry
about food packed in a chitosan container, said Fernandez. The
part of the shrimp that causes allergies is in the musculature,
not the shell, he said.

Image: Cups and egg containers made of shrimp shell derived
plastic are seen In this photo provided by the Wyss Institute... 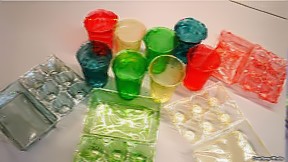 
Thank you for decoing* the modes on VOA Radiogram.