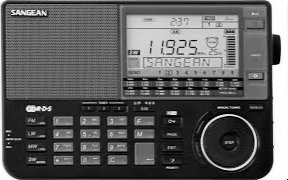 The excellent Sangean ATS909X is available at the KBC Shop...


Welcome to program 62 of VOA Radiogram from the Voice of America.

Please send reception reports to radiogram@voanews.com -- and
this weekend also to the HFCC, organizer of the International
Radio for Disaster Relief exercise: info@hfcc.org .

The Trial of International Radio for Disaster Relief (IRDR)
is/was during the Media Summit on Climate Change, ICTs and
Disaster Risk Reduction, 5-6 June 2014, in Jakarta, Indonesia

The following statement is from HFCC, the global association for
the coordination of shortwave broadcast frequencies:

From its infancy since 1920s shortwave radio has been associated
with its potential of being a communication tool in emergencies.
This use of shortwave radio is still very much present among
amateur radio enthusiasts for example, who discovered its long
distance properties early in the twentieth century. Amateur radio
provides a means of communication on shortwaves and other
frequencies "when all else fails". This role of amateur radio is
well recognised, valued and appreciated both by the public and by
the world institutions managing and regulating the use of the
radio spectrum.

In contrast the huge technical potential of international
shortwave broadcasting that operates transmitter facilities tens,
or hundred times, more powerful than those of amateur radio,
remains almost unused in emergencies. At the moment when local
and even regional communication and information networks are
needed most, they are destroyed or overloaded and the population
suffers from an information blackout. Shortwave radio is capable
of remaining the only source of information.

Although the life-saving role of radio broadcasting is widely
recognised by the public, and confirmed by surveys conducted
after the recent disasters - and even acknowledged by world
leaders - no concrete projects have been ever designed and no
regulatory framework has been developed.

The Trial is held on the occasion of the Media Summit on Climate
Change, ICTs and Disaster Risk Reduction that is taking place
from 4 to 5 June 2014 in Jakarta, Indonesia.. Twelve important
international radio broadcasters are taking part in the Trial.

The shortwave Trial programmes that the participants of the
Jakarta Media Summit will be able to tune in will be in fact the
first practical test of the project that has been developed by
the HFCC - international Radio Delivery association in
cooperation with Arab States and Asia-Pacific Broadcasting
Unions.

The project would not be possible without the system of the
global online co-ordination of frequencies developed in
accordance with International Radio Regulations. There are ten
international shortwave bands. In spite of some transmission cuts
many bands are still overloaded. The aim of the project has been
to identify and select dedicated frequency channels completely
free from interference.

Two frequency channels have been exclusively dedicated for the
present Trial of the disaster relief project in the 0200-1130 UTC
Trial period. In other words the channels are outside the regular
programme and frequency schedules of all participating stations.
Any station that volunteers in the disaster relief Trial can use
them but naturally the time-slots have to be coordinated.

The use of shortwave transmissions as a delivery platform has
some important advantages: For example the transmitter of All
India Radio located at Bangalore that is also taking part in the
Trial, and its transmitting antenna pointing in the South-East
direction is capable of covering Malayan peninsula, Indonesia,
Southern Phillipines, then down towards New Guinea and North-West
part of Australia.

The antenna and transmitter facilities of other participants in
the Trial are going to provide comparably large shortwave
coverage areas. What is equally important, the transmitting
facilities can be far removed by hundreds or even thousands of
kilometres from the disaster zone suffering from the total
communication and information blackout.

Earthlings have long fantasized about flying saucers from Mars,
but in a strange twist, it may be humans that end up launching
one to the Red Planet.

Early this month, the U.S. space agency NASA will test what it
calls the Low Density Supersonic Decelerator mission, or LDSD.
The test will take place high in the Earth's atmosphere, at
altitudes that most resembles the thin Martian atmosphere.

The saucer shaped craft could be the key to future exploration of
Mars as it would allow heavier payloads to be delivered to our
planetary neighbor.

"Future robotic missions to Mars and even future human
exploration will require more massive payloads than previously
sent to the surface of the Red Planet," NASA said in a statement.

The inspiration for the LDSD came, oddly enough, from a sea
creature, the Hawaiian pufferfish.

When threatened, the pufferfish is able to rapidly inflate,
something NASA researchers hope the LDSD can do to slow heavy
cargo as it speeds through the thin Martian atmosphere.

NASA said the current technology for landing spacecraft on Mars
dates back to the 1970s and the Viking missions.

"That same technology is still being used and most recently
delivered the Curiosity rover to Mars in 2012," the agency wrote.

For the test, NASA plans to use a balloon to take the LDSD
120,000 feet into the air. At that altitude, the balloon will
have swollen to 34 million cubic feet, or large enough to "fit a
professional football stadium inside it."

At that point, the balloon will detach and a rocket engine will
fire the craft up to 180,000 feet at a speed of four times the
speed of sound.

From 180,000 feet, the LDSD will begin a free fall. At this point
the pufferfish concept will be tested when the the Supersonic
Inflatable Aerodynamic Decelerator (SIAD) is deployed. The SIAD
is a kevlar tube that inflated rapidly, slowing the spacecraft.

Once the disc reaches a safe speed, it will deploy a new kind of
supersonic parachute which will allow for a safe landing in the
ocean.

NASA has identified several dates early this month to conduct the
test from the Pacific Missile Range Facility in Hawaii. 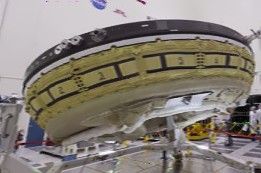 Scientists have discovered an exoplanet they're dubbing a
"mega-Earth."

Kepler-10c is a rocky world weighing as much as 17 Earths,
according to researchers at the Harvard-Smithsonian Center for
Astrophysics (CfA) in Cambridge, Massachusetts.

"This is the Godzilla of Earths!" said CfA researcher Dimitar
Sasselov, director of the Harvard Origins of Life Initiative in a
statement. "But unlike the movie monster, Kepler-10c has positive
implications for life."

What makes Kepler-10c so unusual is that scientists thought any
planet that big would "grab hydrogen gas as it grew and become a
Jupiter-like gas giant."

Kepler-10c has a diameter of about 18,000 miles, 2.3 times as
large as Earth, researchers said. The massive world is 560
light-years away from Earth in the constellation Draco. It
circles its star every 45 days.

Kepler-10c was spotted indirectly by NASA's Kepler spacecraft
using the transit method, which measures the amount a star dims
when a planet passes it. While they were able to calculate the
size of the planet, scientists were not able to determine if it
was rocky or gassy.

Using the HARPS-North instrument on the Telescopio Nazionale
Galileo in the Canary Islands to measure the mass of Kepler-10c,
scientists realized it weighed 17 times as much as Earth, meaning
it must not be a gassy world.

"Kepler-10c didn't lose its atmosphere over time. It's massive
enough to have held onto one if it ever had it," said Xavier
Dumusque of the Cfa, who led the data analysis and made the
discovery. "It must have formed the way we see it now."

The Kepler-10 system is 11 billion years old, according to
researchers, meaning it was formed less than 3 billion years
after the creation of the universe.

Since the early universe only contained hydrogen and helium, the
heavier materials needed to form planets had to have been created
in the earliest stars. When those stars died and exploded, "they
scattered these crucial ingredients through space, which then
could be incorporated into later generations of stars and
planets."

That process, researchers said, "should have taken billions of
years, but Kepler-10c shows rocky planets were able to form
despite the scarcity of heavy elements.

"Finding Kepler-10c tells us that rocky planets could form much
earlier than we thought. And if you can make rocks, you can make
life," says Sasselov.

That such an old star system has an Earth-like planet means
researchers can also look for potentially habitable planets in
those systems as well.

The team's finding was presented today in a press conference at a
meeting of the American Astronomical Society (AAS).

SpaceX unveiled its Dragon V2 spacecraft, which the company hopes
will one day take astronauts to and from the International Space
Station.

Dragon V2 could "land anywhere on Earth with the accuracy of a
helicopter," Musk said.

He added that the craft could be used up to 10 times before
needing servicing.

The craft could also be turned around quickly after landing under
propulsion on land, he said.

"As long as we continue to throw away rockets and spacecraft, we
will never have true access to space," Musk said adding that
continuing to do so "will always be incredibly expensive."

Meanwhile SpaceX competitor Virgin Galactic announced it had
signed an agreement with Spaceport America and the U.S. Federal
Aviation Administration, which the company says will help "clear
the path for commercial flights" on its SpaceShipTwo.

According to Virgin Galactic, the agreement "sets out the
parameters for how "routine space missions launched from
Spaceport America will be integrated into the National Airspace
System."

"Our team is working hard to begin routine and affordable space
launches from Spaceport America and this agreement brings us
another step closer to that goal," said Virgin Galactic CEO
George Whitesides in a statement. "We are grateful to the FAA and
New Mexico for their partnership to achieve this milestone."

Virgin Galactic currently has agreements with Edwards Air Force
Base and the FAA's Joshua Control Facility for test flights in
California.

The company said the agreements "provide coverage for the
company's airspace needs through the remainder of the test flight
program in California and into commercial service in New Mexico."

The company is planning to begin commercial flights by the end of
the year and says more than 600 people have already agreed to pay
$250,000 for the trip.

Please send reception reports to radiogram@voanews.com -- and
this weekend also to info@hfcc.org .

Here are some pics of EA3DAH - Josep Ibern Prats, Mataró [city of the comarca of the Maresme, in the province of Barcelona, Catalonia Autonomous Community, Spain]