Twelve important international broadcasters took part in the
International Radio for Disaster Relief trial on 5 and 6 June
2014. The Trial transmissions were the first practical test of
shortwave radio for disaster risk reduction by international
broadcasters operating high-power transmitters and directional
antennas. There is a need to raise awareness in the world
community about the project since the on-going cuts of shortwave
installations might make its future uncertain.

Thanks to The Mighty KBC

Welcome to program 63 of VOA Radiogram from the Voice of America.

Once a luxury item, salmon is now among the most popular fish
consumed in North America, Europe and Japan.

Since 1980, production of farmed raised salmon has tripled,
accounting for 70 percent of the world market.

Salmon is big business, and fishery managers want to keep those
stocks healthy.

Mapping its genome will improve salmon production in a
sustainable way, says Steinar Bergseth, who chaired the
International Cooperaton to Sequence the Atlantic Salmon Genome
(ICSASG) that did the work.

"In the sequence, in the genetic material are the codes for
determining its health, its look, its utilization of food and so
on and so forth," said Bergseth, "so to be able to understand
this relation between the genetics and the biology then we need
to sequence the salmon."

While the size of its genome is about the same as a human's, the
salmon's genetic code is more complicated. Instead of two copies
of each gene, the salmon has four.

"And of course that is quite obvious that makes some challenges,
not only some, but rather big challenges to understand what you
are sequencing relating to these four copies," Bergseth said.

And the very long repeated sequences made the work even more
arduous.

Bergseth says now that the genome is sequenced, the work to
understand salmon biology is just beginning.

"We could understand, for instance, the sex determination in the
salmon and produce sterile salmon, which would be very beneficial
for this interaction between the escaped farmed salmon and the
wild salmon," he said. "And of course then this problem with
cross breeding between the farmed and the wild will disappear."

The sequence is also certain to trigger work on other species
closely related to Atlantic salmon like the Pacific salmon, trout
and char.

The five-year $10 million project is a collaboration among
government and industry partners in Canada, Norway and Chile.

The annual report by Cisco Systems Inc. – a California-based firm
that makes networking equipment and analyzes devices, connections
and data – predicts that by 2018 global Internet Protocol (IP)
traffic for fixed and mobile devices will reach an annual usage
rate of 1.6 zettabytes. (According to TechTerms.com, a single
zettabyte contains a billion terabytes – itself an
almost-incomprehensible figure.)

The report, released Tuesday, also says video is expected to grow
from 78 percent of current U.S. Internet traffic to 84 percent by
2018. That raises questions about whether Internet service
providers should prioritize traffic, a controversial issue.

Cisco's report comes as the Federal Communications Commission
debates legislation on Internet traffic, or "net neutrality,"
that could allow telecommunications companies the right to
prioritize some traffic.

Consumer groups and some businesses have criticized the proposed
revisions, saying they would create "fast lanes" for companies
that pay up and slower traffic for others.

Cisco's vice president of government and community relations,
Jeff Campbell, told Reuters that "as the FCC looks at rewriting
its net neutrality rules, it is important that we allow for
things like managed services and specialized services that can
provide new applications for consumers."

Not all Internet traffic will be the same, according to the
report. Internet-connected medical devices, for example, would
have a different data profile than video streaming and a higher
speed urgency.

By 2018, the report forecasts, most Internet traffic "will
originate from devices other than personal computers," with Wi-Fi
overtaking wired devices and high-definition (HD) video
surpassing standard definition.

The FCC voted 3-2 last month to offer a plan that could allow
major Internet service providers such as AT&T and Comcast to make
deals with companies such as Google and Facebook that would
enable faster content delivery for consumers.

Upon releasing its proposed "net neutrality" rules May 15, the
FCC set a 120-day period for public comment, with 60 days for
initial comments and another 60 days for responses.

PC World reported last week that the FCC had received more than
64,000 comments, with 45,000 in May. It said thousands appear to
have been generated by a comedic piece skewering the FCC and
broadband providers. First airing on HBO's "Last Week Tonight
with John Oliver," it got more than 1.6 million hits on YouTube.

Some information for this report was provided by Reuters. 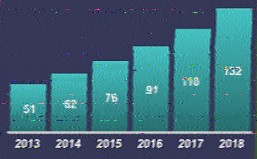 HONG KONG - Chinese authorities have increased online censorship
in the past few weeks, a sensitive time that coincides with the
25th anniversary of the Tiananmen crackdown.

VOA spoke with the editor behind Pao-pao.net, a Chinese language
news website whose entire conent is hosted on Amazon's web
services and encrypted in a way that makes it difficult for
Chinese censors to block access to it. The editor asked that his
name not be used.

Has the recent increase in online monitoring by Chinese
authorities affected your website?

"Right before the June 4 [Tiananmen] anniversary I contacted our
IT partner back in Beijing, the GreatFirewall people. They have
informed me that so far nothing had happened to Pao-pao. But
right afterwards I saw Pao-pao's mirror site, which is hosted on
Amazon cloud, has been very unstable. We haven't been able to
confirm if it's a consequence of the June 4 anniversary or
something else."

What is Pao-pao's editorial goal and how do you manage to
keep it functioning within China?

"The editorial direction of Pao-pao is trying to make it a
platform that could inform the Chinese netizens of the online
security and the Internet development situation in China and
around the world. Because of the technology, which is dubbed as
"collateral freedom," we can do uncensored news, we can do honest
reporting about these issues. Pao-pao uses this technology,
which we host on international cloud services, that the Chinese
government don't dare to take down because of the vast amount of
economic interests invested on them. So we can see how far this
model could go."

What problems do international Internet companies face as
they expand their business into China?

"I think that international companies now are in a dilemma, they
are hitting a difficult spot because if they want to continue or
start doing business in China they have to comply with the
Chinese government request, which basically means they have to
block or take down information that the Chinese government think
is too sensitive for the Chinese public. On the other hand, you
see Chinese Internet companies they have been actively complying
with the Chinese government's requests: taking down accounts,
keeping records of their users. A lot of Chinese tech companies
are happy that foreign companies, like Google and Microsoft, are
backing out of China. I think it is a joint effort by the
government and these companies to push them out so they can
provide market for domestic companies."

Pao-pao relies on technology hosted on Amazon. Do you worry
that as Amazon increases its business in China, they might
be more willing to comply with stricter rules and disallow
cloud services for websites like Pao-pao?

"So far, it's unforeseen. It's our sincere hope that Amazon will
be an ethical company, that will try to keep the Internet free
and neutral so every voice can be expressed on their services.
If they do receive pressure to block Pao-pao and websites like
that we are also prepared for that and we are expanding to other
cloud services as well.

Just in time for World Cup 2014 in Brazil, Voice of America is
introducing a new soccer program and two new blogs to enable its
global audiences to better enjoy the world's game.

The new program is called Penalty Box. It features ardent soccer
lovers from VOA's language services, diehard fans from Asia,
Africa, Europe and the Americas, all of whom will be rooting for
their native teams. With its different hosts and many different
perspectives, Penalty Box offers a broad range of analysis and
opinions – and plenty of passionate debate. The show is recorded
in a small makeshift studio – "It really is a box," says Penalty
Box creator Amish Srivastava – and the set is also rather
makeshift, being decorated with soccer jerseys, trophies, and
other memorabilia donated by VOA staffers. In addition to
English, the show is also recorded in Bangla, Pashto/Dari,
Portuguese, and Swahili, making it just about as international as
the game itself.

Even before the World Cup began, Penalty Box was making quite a
splash, with several affiliates picking up the weekly segment,
including DESH TV in Bangladesh, and Radio Television Afghanistan
(RTA) in Afghanistan. Penalty Box episodes are also available
online and on mobile.

Soccer fever in Africa is running high this World Cup with teams
from Cameroon, Ivory Coast, Ghana, Nigeria and Algeria vying to
advance further than any other Africa team ever has. VOA's Africa
and English Divisions have caught the fe n£o. They have
launched two mobile sites exclusively dedicated to covering the
Cup. The sites feature original reporting from Brazil by VOA
French sports journalist Nicolas Pinault as well as plenty of
soccer facts and figures about the World Cup. The French and
English sites target younger soccer fans with on-the-go stories
tailored to the mobile lifestyle, so they can follow all things
Brazil 2014 on VOA.