This is a digital text transmission from Radio Martí.


For the next few days, Radio Martí is transmitting a minute of
MFSK16 centered on 2500 Hz, daily, according to the following
schedule:

Each transmission is 57 seconds.

You will probably hear noise on the frequency.

Thanks to The Mighty KBC.

Welcome to program 79 of VOA Radogram from the Voice of America.

Here is the lineup for today's program (all MFSK32 except
surprise mode):

Norway tops the list of countries that offers the best social
policies for people over 60. Afghanistan is rated the worst. The
rankings appear in the new Global Age Watch Index. Help Age
International published the index of 96 countries that are home
to 790 million people 60 and older.

Chief Executive Officer Toby Porter said, "For too long, older
people have been excluded from international and national
development planning." He blamed much of that on – what he calls
– "exceptionally poor data" on older people.

"We have a world which is ageing fast. And what the index does is
compares and ranks countries from best to worst countries in the
world to grow old," he said.

"Health, income, what we call capability - ability to carry on
contributing employment. And then the final one about enabling
environment – what do older people think about the environment
that they live in."

Porter said that many older people are not financially secure.

"The focus on the report this year is on pensions – on retirement
income that older men and women can expect."

The index reports only one in four older people over 65 in low
and middle income countries have any kind of retirement saving.
Help Age lists the best pension system as a universal basic
payment that is available to everyone once they are old enough.

Norway gets the highest ranking in the index. Rounding out the
top 10 are Sweden, Switzerland, Canada, Germany, the Netherlands,
Iceland, the United States, Japan and New Zealand. Afghanistan is
at the bottom of the list following many years of conflict.

There are 10 African countries on the index – all near the
bottom. South Africa ranks the highest among them at 80. However,
Porter said South Africa is doing some positive things.

"South Africa has introduced and continues to support and grow a
basic universal pension entitlement for all of her older
population. And this is terrific. And we've seen some very
encouraging public statements from President Zuma and from other
senior politicians in South Africa that they recognize the
contribution and the importance of supporting their older
population. South Africa is actually showing a really good model
to the rest of the continent that it is possible to introduce
pensions," he said.

South Africa is one the so-called BRICS nations – countries with
strong emerging economies. Other members include Brazil, ranked
58 – Russia, ranked 65 – India, 69 and China, 48.

Porter said, "A lot of the impetus behind China introducing
pension provision for all of her older citizens was to provide an
incentive for them to start using their purchasing power earlier
in their lives in spending money rather than saving it for a
pension."

The African countries of Ghana, Morocco, Nigeria, Rwanda, Zambia,
Uganda, Tanzania, Malawi and Mozambique all rank below South
Africa on the Global Age Watch Index. In fact, Mozambique is just
above Afghanistan on the list.

HelpAge International recommended African nations begin providing
pensions when people turn 60. However, if countries are poor, it
said they might not be able to institute a pension system to
every eligible person at once – or they could require a higher
eligibility age for a time.

Another factor is Africa's youth population, which is much
greater than most parts of the world. Therefore, governments are
already hard pressed to provide education and jobs. Porter said
foresight is needed.

"Let's not make this a competition between generations. Firstly,
in an individual's lifetime he or she is going to be a youth and
an older person. We know many instances whereby older people
receiving pensions have allowed children in poor and marginalized
households to go to school."

HelpAge reported the cost of pensions is "much less than often
assumed." It cites research in 50 countries that found that "the
cost of a universal pension -- for all people over 65 at 20 per
cent of average income -- would range from less than half a
percent of Gross Domestic Product in Burkina Faso to 1.8 percent
in China."

Some pensions may not amount to much money, but HelpAge said it
can offer some independence and enough to buy essentials, like
medicine. 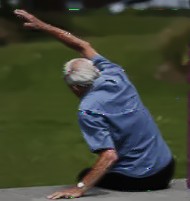 Stories of people snapping up multiple units of the new iPhone 6
and smuggling them to China where they are sold for huge profits
have circulated ever since a video showed people camped out in
front of an Apple store in New York days before the phones went
on sale.

Because Apple has yet to set a launch date for the new iPhone in
China, the phones initially fetched up to $1,500 on the gray
market there, according to the Quartz website. Time magazine said
the phones could be worth $3,000.

That's a considerable profit on a phone that sells for $750
without a 2-year contract and much less with a contract.

Nearly everyone camped out at the various Apple stores in New
York, where the video was filmed, appear to be Chinese. Many of
them are old and don't appear to speak English. Many of them
slept in plastic bags on cardboard.

The crowds were so big, the New York Police Department was
called. One woman is seen being arrested in the video.

According to the video, most of those who waited to get the new
phones bought two. Many of them were later filmed handing them
off to others who appeared to be collecting larger quantities.

Those handing over their phones appeared to receive cash. It was
unclear how much, but according to Time, those waiting for the
new phones in Singapore received $130 for their troubles.

According to Linda Sui, an analyst at Strategy Analytics, the
buyers were likely from less affluent areas of inner-city
Chinatowns.

"They need money. Most of them are low-income people," Sui told
Time.

Some suspected the Chinese mafia could be behind the market, but
experts say there is likely little structure to the scheme.

But the easy money would not last, as the price of the phones has
been plummeting, according to Quartz. That's because the Chinese
gray market has become flooded with an estimated 5 million phones
brought in from Hong Kong, Japan and the U.S.

Bringing the phones back to China is illegal, and authorities
have intercepted many, including a 600-phone haul heading from
Hong Kong to the mainland.

The phones that make it in might not even work.

Carl Howe, an analyst with 451 Research LLC told Time that there
are many different models of the iPhone 6, depending on the type
of wireless networks available in the country where they were
intended to be used. If the same types of networks aren't
available in China, the smuggled phones won't work.


Image: Customs officers show smuggled iPhone 6 sets, which were
seized at a port in Shenzhen, China... 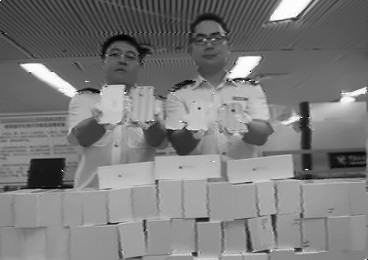 As pro-democracy protests continue in Hong Kong, the state-run
media in Myanmar, also known as Burma, have thus far been silent
on the events in the former British colony.

Information Minister Ye Htut Wednesday told VOA's Burmese service
that it is the government's editorial policy not to intervene in
the internal affairs of other countries.

"According to our editorial policy, state-owned media didn't
report on some affairs which may intervene in the internal
affairs of other countries," he said. "Even though we are going
to transform public service media, we are still a state-owned
one. So if we report on this news, it sometime means [the
government] are assumed to agree with this."

But according to Kyaw Min Swe, Chief Editor of Rangoon's The
Voice, anti-government riots in Thailand were covered during the
time of previous minister.

"I think it depends on the new minister himself," he said.

Under previous ministers, "[state-owned media] reported some
international news like [in] Thailand's case," he added. "They
reported on unhealthy food and cosmetic of Chinese imports and
some other international news during the period of the minister
Aung Kyi."

Even though Myanmar's state-run media have been silent on the
Hong Kong protests, the country's growing private media have
featured extensive coverage of the events.

This report was produced in collaboration with the VOA Burmese
service

For more about events in Hong Kong and China, see...

President Vladimir Putin says Russia is not planning to limit
access to the Internet or put it under "total control," but will
need to ensure the stability and security of its Russian segment.

Putin, speaking at a meeting of his presidential Security
Council, said Russian Internet domains had faced a growing number
of cyberattacks.

Putin said the security services had detected constant growth in
the number of cyberattacks, particularly in the last six months
-- the period when the crisis in Ukraine worsened.

He added that the intensity of the attacks "depends on the
current international situation."

"It is obvious that today we need to elaborate and implement a
range of additional measures in the area of information
security," he said, adding that Russia did "not intend to limit
access to the Internet" or "to put it under total control."

The Russian leader appeared to be trying to defuse speculation
about possible Internet restrictions amid escalating tensions
with the West over Ukraine.

The Russian daily "Vedomosti" reported on September 19 that the
government may require Russian Internet service providers to
install equipment that would make it possible to sever Russia's
access to the global Internet in situations deemed by the
authorities as "extraordinary."

The Kremlin has denied the report, but said on September 30 that
Russia was "rehearsing responses should our esteemed partners
decide to switch us off from the Internet."

According to experts, the more domestic service providers a
country has, the more difficult it is to completely switch off
the Internet.

Domestic providers offer web access after purchasing connectivity
from another provider outside the country.

There are more than 300 domestic service providers in Russia that
have purchased connectivity from outside the country, and the
government would have to force them all to shut down to fully
sever access.

However, there are several precedents. Egypt shut off the
country's Internet for five days in 2011 during the Arab Spring
protests.

Syria's Internet was shut off three times in 2011. Nepal and
Myanmar have briefly disconnected, and China shut off access to
the mostly ethnic Uighur region of Xinjiang amid unrest in 2009.

An alternative to shutting down the Internet completely is
filtering content. Russia has already blocked several opposition
sites and passed a law requiring registration by some bloggers.

Russia also has indicated that foreign Internet companies will
have to comply with its laws.

According to a September 26 report in the "Izvestia" daily,
Russia's media regulator, Roskomnadzor, has notified Facebook,
Twitter, and Google that they must comply with a law requiring
registration with the agency, and store six-month archives of
metadata for their users at a location within Russia.

With reporting by Reuters and TASS


See also:
Can Russia Disconnect From The Internet?
http://www.rferl.org/content/can-russia-disconnect-from-the-internet/26617176.html