At the time I am writing this, there are no program details
at the global24radio.com website, except that "the EU News
Network would be providing several hours of original news and
reporting."

If you decoded this, write to Eric: themightykbc@gmail.com

Welcome to program 83 of VOA Radiogram from the Voice of America.

Here is the lineup for today's program (MFSK32 except where
indicated):

Broadcasting Board of Governors press statement:

In response to a recent increase in the number of Cubans
attempting to migrate to the United States, the Office of Cuba
Broadcasting has produced a 60-second Spanish-language Public
Service Announcement that will air on TV and Radio Martí several
times per day.

“The goal of the PSA is to clarify U.S. immigration policy and
discourage Cubans from attempting the dangerous journey,” said
OCB Director Carols García-Pérez.

In 2013, Cuba reduced travel restrictions and began allowing
Cubans to travel internationally without an exit permit. However,
they must still have a valid passport and are subject to U.S.
immigration laws. The U.S. Coast Guard reports that in FY 2014
3,277 immigrants have been rescued from the waters near Florida,
up from 1,082 in 2010.

Video of the PSA at:

Wednesday's successful launch of a Russian space vehicle taking
supplies to the International Space Station was in sharp contrast
to the explosion of a private U.S. cargo space craft shortly
after it's Tuesday launch on a similar mission. But U.S. space
agency NASA, which contracted the private firm to supply the
space station, says the program will move forward, with more
launches to come.

Under a $1.9 billion contract with NASA, Orbital Sciences
Corporation, based in Virginia, has sent two cargo vehicles to
the International Space Station without a hitch.

This time, their Cygnus spacecraft, powered by an Antares rocket
was carrying more than two tons of water and food and also some
classified equipment.

But several seconds after the launch the rocket blew up, before
the new second stage motor was able to ignite.

The explosion completely destroyed the cargo and damaged the
launch pad, but no injuries or loss of life were reported.

At a press conference at Wallops Island launch facility Executive
Vice President and General Manager at Orbital Sciences
Corporation, Frank Culbertson, said the Antares program will be
put on hold.

"We will not fly until we understand the root cause and the
corrective action necessary to insure that this doesn't happen
again," said Culbertson.

"It's a setback, a short-term setback, but Orbital, they have
still four more launches to go to the International Space Station
and we anticipate those to be a huge success," said Stallmer.

"Because not only was this a major source of revenue for the
company, this commercial cargo contract, but we don't know yet
how much damage has been done to the launch pad and it's the only
pad from which the Antares vehicle could be launched," said
Logsdon.

NASA has a similar contract with another private firm, Space X
Corporation, based in California, and their cargo vehicle is
scheduled to launch in December.

For now the U.S. is only sending unmanned flights into space.
but that will change. Space X and Boeing have both signed
contracts with NASA and manned space flights are planned as soon
as 2017.

Image: The malfunctioning Antares rocket was detonated to prevent
it from crashing in an inhabited area (KD4EBM photo) ... 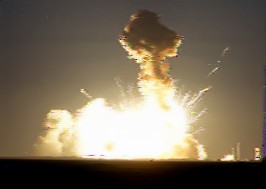 By 2018, a large solar power plant in the Tunisian part of the
Sahara desert may start sending power to energy-hungry Western
Europe. The company running the plant says once it is fully
operational it will generate almost twice as much electricity as
an average nuclear plant and supply two million homes in Europe.

According to the European Commission's Institute for Energy, just
0.3 percent of the Saharan Desert's intense solar energy can
provide Europe with all the electrical power it needs.

A company called Nur Energy plans to capture some of it by
building a solar plant similar to an Israeli one in the Negev
desert that uses heliotropic mirrors. This technology, unlike
photovoltaic cells, can generate energy even when the sky is
overcast or at night.

Thousands of mirrors, spread over 100 square kilometers, will
concentrate sunlight to a tower where it heats and melts a
special salt.

"You can then store that heat very easily, so you can continue
producing electricity after the sun goes down," said Sara.

In a heat exchanger, the molten salt turns water into steam for
turbines that turn electrical generators.

Sara said the project could significantly decrease use of fossil
fuels in Europe.

"We could gradually decarbonize the European grid using desert
power, using this solar energy with storage from the Sahara
desert and linked to Europe with high-voltage DC cables which are
very, very low in their losses," said Sara,

The cable link to Europe is another interesting part of the
project.

Instead of the usual alternating current transmission, Nur Energy
plans to send the power by a dedicated direct current underwater
cable. Power being sent through the cable has a loss rate of just
3 percent per 1,000 kilometers. In addition to being cheaper,
this technology requires no synchronization between different AC
transmission systems.

"A lot of this equipment can be manufactured by local Tunisian
companies, and that will create employment and employment
opportunities for the Tunisian youth," said Sara.

The construction of the solar plant in southwestern Tunisia is
expected to start by the end of 2016, with the first kilowatts
being delivered by late 2018. 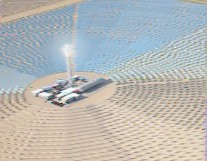 ACCRA - For years, poor Ghanaians have been burning old
electronics in the open air to extract precious metals and sell
them as scrap. But a new recycling center may mean the end of
e-waste burning in Ghana.

On the shores of a trash-clogged lagoon in Ghana's capital Accra,
scrap dealers set gutted electronics ablaze. Fire melts the
plastic that stands between the scrap dealers and precious metals
like copper.

Black smoke belches from the Agbogbloshie neighborhood across the
city. The lead levels in the soil around the site are off the
charts, up to 100 times above normal. Another study tied the
presence of industrial chemicals in women's breast milk in Accra
to pollution from Agbogbloshie.

For years, the burning of electronic waste in the neighborhood
has continued unabated. Most of the men doing the burning are
from Ghana's impoverished north. Sumani Abdul Karim has been
working here since 1998.

"The reason why they burn, they do not know how they will remove
the wire and leave the copper," said Karim. "So normally that is
why they gather it, go and put it down where they find fire from
it, burn it and go on and weigh it.

But the burning may be coming to an end. Environmental group
Green Advocacy Ghana recently opened a recycling center at
Agbogbloshie. The center is equipped with industrial wire
strippers to safely separate copper from plastic.

When it is fully operational, GreenAd's executive director Yaw
Amoyaw-Osei says it will put a stop to the burning.

"They know of the harm the burning practices is doing to them.
So they were all eager to see some change," said Amoyaw-Osei.
"They could not stop because they thought it was just a matter of
livelihood, they needed to survive. But with this facility they
realized there is no justification to continue burning and harm
themselves."

Many of the scrap dealers at Agbogbloshie have grown cynical
about the prospects of change coming to the bare windswept plain.
Some of the young men who man the fires have turned against the
recycling center, fearing it will harm their livelihood, Karim
says.

Greater Accra Scrap Dealer's Association chairman Abdul Rahaman
Abdulai says many organizations have come to the scrap yard over
the years, promising to help. Few have delivered on their
promises, but this recycling center may actually work, he says.

"We cannot hide the burning, because first of all, we did not
have the machines, but now we have the machines so that we stop
burning so that things will go fine for us," said Abdulai.

On a Monday afternoon, black smoke was still billowing up into
the air, across the lagoon and towards Accra's downtown. The
recycling center is not fully operational yet, and lacks wire
strippers for smaller diameter cables.

Ameyaw-Osei says more equipment and personnel are on their way.
Until then, burning continues.