Welcome to program 86 of VOA Radiogram from the Voice of America.

Here is the lineup for today's program (all in MFSK32 except
where indicated):


Fly Us to The Moon, UK Space Mission Asks Public

LONDON - A British space venture is giving ordinary citizens the
chance to leave their mark on the moon in a decade's time while
helping scientists scout a possible location for a permanent base
there.

Lunar Mission One launched a crowdfunding drive on Wednesday to
cover its start-up costs. By mid-morning organizers had raised
around 74,000 pounds, according to the Kickstarter website,
towards an initial target of 600,000 pounds ($940,000) they aim
to reach within a month.

More than 750 people signed up within hours, with funders asked
to pledge at least 60 pounds for a digital memory box in which
their messages, pictures, videos and - via a strand of hair - DNA
will be carried into space and then buried in a capsule on
earth's nearest neighbor.

Organizers will need several orders of magnitude more to recoup
the total estimated project costs of 500 million pounds, the bulk
of which they hope to raise by the same method.

"Governments are finding it increasingly difficult to fund space
exploration that is solely for the advancement of human knowledge
and understanding as opposed to commercial return," said mission
founder David Iron, a former Royal Navy officer who advises on
space and technology projects.

"... Anyone from around the world can get involved for as little
as a few pounds."

Established by engineers and scientists with backing from
University College London and science broadcaster Brian Cox, the
mission aims to send its unmanned module to the moon's unexplored
South Pole within 10 years to see if it might be suitable for a
base.

Should it go ahead, the project will drill deeper into the moon's
surface than ever before.

Last year a Chinese unmanned spacecraft touched down on the moon
in the first such "soft-landing" since 1976.

Rendition of the lander setting down on the moon ...

WUZHEN, CHINA- Chinese officials called on Wednesday for controls
on the Internet to preserve stability, saying its model for
cyberspace regulation can be the framework for spawning
commercial successes like Alibaba Group Holding Ltd.

The comments, made at the start of the World Internet Conference
(WIC), show China is unlikely to loosen its tight grip on the
medium even as it has begun a transformation of its economic
model.

"This place is crowded with tourists, who are perfectly orderly,
and cyberspace should also be free and open, with rules to follow
and always following the rule of law," Lu Wei, China's Internet
chief and director of the State Internet Information Office, said
at the conference.

Lu was referring to China's eastern tourist town of Wuzhen,
roughly 75 miles from Shanghai, which is hosting the three-day
conference.

They already got a taste of China's intent when on Tuesday the
Chinese government blocked access to a swathe of websites in what
an Internet monitoring group said was a blunt censorship
campaign.

With a population of 1.4 billion and 632 million people online,
China is a market no one wants to miss out on. But it also has
the world's most sophisticated online censorship system, known
outside the country as the Great Firewall.

China's own Internet firms have seen huge success on their home
turf. Alibaba, which made a record-breaking $25 billion listing
in New York earlier this year, Tencent Holdings Ltd and Baidu Inc
are together worth more than $500 billion in market
capitalisation. All three of China's biggest Internet companies
were in attendance at the conference.

"The Internet is a double-edged sword," said State Council Vice
Premier Ma Kai at the conference.

"Well used, it's Alibaba's treasure. Poorly used, it's Pandora's
box. Cyber security is a shared challenge faced by human society.
Effectively dealing with it is a shared responsibility for all
governments," said Ma.

Multiple Problems Cause Congestion at Busiest US Port Complex

LOS ANGELES - The Christmas season is the best time of year for
Liang Liang's wholesale business in Southern California — if he
has merchandise to sell.

His customers are asking for merchandise now, but he can't get
it. "I feel very helpless," he said.

Liang is still waiting for cargo that arrived at the Los
Angeles-Long Beach port complex at the start of the month. It
usually takes two days to a week to receive it. But now he has no
idea when the goods will clear the port.

The Long Beach and Los Angeles ports make up the busiest
container port complex in the U.S. Port officials say there are
several reasons why it is experiencing congestion. One problem
involves the wheeled frames called chassis that hold the shipping
containers.

Port of Long Beach spokesman Lee Peterson said the chassis
haven't been where they need to be for trucks to move the
containers.

Another reason for the congestion: Cargo ships up to 50 percent
bigger than those of a few years ago are arriving with more
containers, but there are fewer truck drivers to haul the
containers away, said Craig Merrilees of the International
Longshore and Warehouse Union.

"The conditions are so bad, the pay is so low, and the problems
are so serious for these workers that they're quitting,"
Merrilees said.

"It's hard for drivers to make money in here," he said.

Solis said it usually takes two to four hours to drop off and
pick up cargo at the port. On a recent day, though, it took nine
hours.

He said the port congestion is made worse by contract
negotiations between the Pacific Maritime Association — the
organization that represents shipping companies — and the union
for West Coast port workers.

The shipping companies said the union has refused to dispatch
hundreds of skilled workers to the Los Angeles and Long Beach
ports. The union's Merrilees said that's not accurate.

"Those are exaggerations and distortions — trying to point the
finger at the union when in fact the industry and employers have
been responsible for massive congestion problems," he said.
"People are frustrated. They're upset. They feel they're being
scapegoated, and I can imagine why in some cases they may not
feel like they owe their employer 100 percent."

The Pacific Maritime Association said there are also union
slowdowns in other West Coast ports just before the holiday
shopping season. Port officials said that by this time of year,
most of the holiday cargo is already in warehouses and stores.
But Liang is still waiting for his holiday merchandise.

"The cargo I want can't get here," he said. And when the season
is over, he can't sell off his merchandise.

Liang can do nothing but wait as contract negotiations continue
and the other problems persist at the ports.

Image: Containers stacked on the Ever Conquest (Evergreen
Container Ship) at the Port of Los Angeles ... 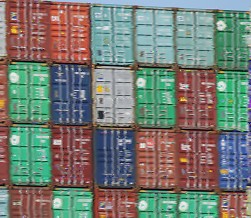 The BBG's networks draw a record-high audience of 215 million
people each week, according to a new report released today. This
includes noteworthy increases in competitive media markets, on
television and online.


Full text and link to report:

Image: Six people who are probably no longer part of the radio
audience for U.S. International Media ...