".....The Mighty KBC will not transmit the usual minute of MFSK64 this weekend. The MFSK64 will return next weekend."

Welcome to program 88 of VOA Radiogram from the Voice of America.

The International Broadcasting Bureau transmitting station in
North Carolina, from which you are receiving this VOA Radiogram,
is evaluating a new Orban 9300 Digital Optimod-AM audio processor
on its transmitter GB-5.

The engineers in North Carolina "would be very interested in any
listener comments regarding fidelity and the ability to overcome
less than ideal propagation while using the new audio processor."

Here is the schedule:

These are normal voice broadcasts, with some music, not digital
text modes! You may notice co-channel noise from Cuba on the
Radio Martí frequencies.

Send reception reports to our usual address,
radiogram@voanews.com, and I will forward them to North Carolina.

The fifth annual meeting of the Colombian-Vernezuelan DX
listeners -- V Encuentro Diexista Colombo-Venezolano 2015 --
will take place 9-10 January 2015 in San Cristóbal, Táchira,
Venezuela. If you comprehend Spanish and can be in Venezuela
during those dates, email to encuentrodiexista@gmail.com for
details. And see...

VOA Radiogram will send greetings to the Encuentro on 10-11
January.

Also on the subject of DX meetings, interviews from the European
DX Council (EDXC) conference held in September will be transmitted
by the Rhein-Main-Radio-Club via shortwave broadcast transmitters
on 13 and 15 December ...

WASHINGTON - A growing number of nations are increasingly
censoring parts of the Internet and passing laws to allow for
greater surveillance of what people do and say online, according
to a new report issued by Freedom House.

The report released Thursday and titled "Freedom of the Net
2014," is an annual survey of 65 governments and their policies
regarding the filtering or censoring of online content. It also
looks at the types of electronic surveillance they conduct and
how they may punish citizens whose online activities they
disapprove of.

"The most dramatic declines were in Russia, Turkey and Ukraine,"
said Laura Reed, a Freedom House research analyst and co-author
of the report. "And similar to past reports, the countries that
really rated the worst overall again are Iran, Syria and China."

Of the 65 nations surveyed, 36 were rated lower on measures of
Internet freedom than in the previous year, while only 12 saw
their measures of freedom tick upward.

Among those nations seen to be doing better were Myanmar,
Tunisia, Cuba, and India. Iran also was rated marginally more
free because of a slight easing of censored content, despite the
author’s conclusions that Iran remains one of the worst offenders
globally of violating users' free expression and privacy.

Nations deemed to be less free than previously include chronic
rights offenders such as Saudi Arabia, Zimbabwe and Vietnam, as
well as the United States, where the report authors charted minor
increases in "limits of content" and "violation of user rights."

The conflict in Ukraine, beginning last year with the Euromaidan
protests, were seen as the major causes for both Russia's and
Ukraine’s significant slide in allowing free online expressions.

In Ukraine, the surveillance of protesters by the Yanukovych
regime, as well as the targeting of journalists publishing work
on the web, made that nation significantly less free online, Reed
told VOA.

Meanwhile, she said, Russian authorities have significantly
stepped up the censorship of critical voices and independent
media.

"In March, they used a new law that was actually passed in
December," Reed said. "This new law allows the prosecutor general
to issue orders to block online content related to extremism or
calls for unsanctioned public protests.

"So this law was then used quite quickly to block independent
media outlets within Russia that were either reporting on events
in Ukraine or that had been critical of the Kremlin," she said.

Complete text of this VOA report:

Image: Map showing the countries listed as not free in the
Freedom On the Net 2014 report ... 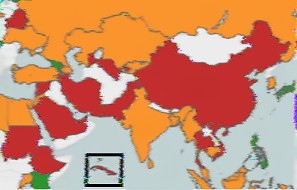 No one had ever seen, or named, the most abundant material on
Earth — until now.

Bridgmanite has finally been sampled and named in honor of Nobel
Prize-winning physicist Percy Bridgman.

According to the International Mineralogical Association, a
mineral cannot be given a name before the physical proof of its
existence is obtained.

Scientists believe that about 70 percent of Earth's lower mantle,
or about 36 percent of the planet's total volume, is made of an
extremely dense magnesium iron silicate, now named bridgmanite.
That region of Earth's crust starts at 670 kilometers (416 miles)
below the surface and is therefore inaccessible with today's
drilling technology.

But instead of pulling a sample of bridgmanite from down below,
scientists found it within a meteorite that was subjected to
short but intense pressure, similar to what is felt hundreds of
kilometers deep inside the Earth's crust.

Even if they could drill deep enough to reach the bridgmanite
layer, scientists say, they would be unable to study it because
its structure would be unstable when relieved of the enormous
pressure under which it exists.

Scientists from the University of Nevada-Las Vegas described
bridgmanite in the journal Science.

Image: Bridgmanite is the black material seen in a vein on the
right side of this meteorite ...

NEW YORK - Turquoise, coral, opal and silver are tools in the
hands of master Navajo jewelers. The Yazzie family has been
making contemporary Navajo jewelry for decades and now their work
is being celebrated in a museum in New York. The exhibition
comes as President Obama opens the 2014 White House Tribal
Nations Conference in Washington.

For generations the Yazzie family has been using traditional
Navajo techniques to make jewelry in America's Southwest. The
concho, the squash blossom and the sun are traditional imagery
found in many of their pieces.

The National Museum of the American Indian in New York is
showcasing four decades of work by brothers Lee and Raymond
Yazzie. They are elders the famous jewelry-making family, whose
work has been - up to now - dispersed among private collections.

Lee is known for his silversmithing, which was introduced to the
Navajo centuries ago by Spanish colonists. He uses silver to
encase the jewels, which in Navajo tradition have a spirit.

"Many times my father would tell my mother to respect this work.
It is sacred, you know the turquoise was sacred," said Lee.

Ray, who has been making jewelry since his early teens, is
renowned for his stone work. He focuses on Hozho, a Navajo
concept that prizes balance and beauty in art and life.

"It takes a long time to get everything together especially the
different color coral. It takes a few months or even a couple of
years to get all the different colors together," said Ray.

The museum exhibit, which includes works owned by 50 private
collectors, is called "Glittering World: Navajo Jewelry of the
Yazzie Family." Glittering world refers to the Navajo name for
the realm of light and sun in which all beings live.

"This is an influence directly on their jewelry and the colors of
the landscape, the light. Navajo belief about light and color,"
said Curator Kathleen Ash-Milby.

Collectors pay a lot for Yazzie artwork. Abby Kent Flythe has
been enamored with Navajo jewelry since she was just seven. Now
she is a dealer.

"Because of the materials and the time it takes them to make and
the skills they've developed over the years it can go quite
high," she said. "Up in the ... over the hundred-thousand range."

Dozens of Yazzies came to New York City for the gallery opening,
which coincided with an award from their home state of New
Mexico. For Ray, the experience was overwhelming.

"You go through life and you put pieces together and because they
go into collections, then the public never really gets to see the
pieces that you make and so through the years I always wondered
when am I going to get the recognition that I want, you know?
When are people going to see what I can do," she asked.

The 300-piece exhibit will be on display for one year. The
curator says the show is just one part of the larger,
contemporary American Indian story. 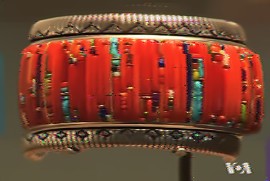