Radio amateurs throughout the world will participate in the ARRL
10 Meter Contest this weekend until Sunday 2359 UTC.
Frequencies are 28 to 29.7 MHz and the modes are CW and voice
(mostly USB).

During the contest, an ARRL 100th anniversary station will be
operating from the Voice of America Amateur Radio Club, K3VOA,
using the call W1AW/3.

Thanks to The Mighty KBC...

Welcome to program 89 of VOA Radiogram from the Voice of America.

This weekend until 2359 UTC on Sunday is the American Radio Relay
League (ARRL) 10-meter Contest. The contest is in CW (Morse code)
and phone (voice) modes. Propagation conditions on 10 meters
(28-29.7 MHZ) can be very good, or very bad.

During the contest, an ARRL 100th-anniversary station will be
active from the Voice of America Amateur Radio Club, K3VOA, using
the call W1AW/3. I will be operating phone from this contest
station Sunday around 1400-1600 UTC.


SSTV from the ISS

"The Russian ARISS team members plan to activate SSTV from the
ISS on Dec 18 and 20. Expected mode will be PD180 on 145.800 MHz
with 3 minute off periods between transmissions. A total of 12
different photos will be sent during the operational period.
Start time would be around 14:20 UTC on December 18 and 12:40
UTC on December 20. The transmissions should terminate around
21:30 UTC each day. Space-X 5 will be launching the same week and
delays in the launch could adjust SSTV operational times."

MultiPSK is one of the programs that can receive the PD180 SSTV
mode:
http://f6cte.free.fr/

Shortwave in the News

I will try to include details about these experimental HF
technologies in future editions of VOA Radiogram.

Home to one of the most spectacular marine habitats in the world,
the rocky reefs and kelp forests of coastal California's ocean
ecosystem are threatened by human population growth, global
warming, pollution, and overfishing.

In fact, these same factors have imperiled coral and rocky reefs
worldwide, according to the U.S. National Oceanic and Atmospheric
Administration.

"I have seen the kelp go from really thick to really, really
thin," says Erica Fellins of the international nonprofit Reef
Check. "It is important to monitor it."

Fellins and Reef Check are part of a growing "citizen science"
movement in the United States. She and hundreds of other
volunteer divers are trained to track the health of kelp forests,
as well as coral and rocky reefs found around California.

Citizen scientist Stephen Campbell, who monitors the rocky reefs
around the Channel Islands, off the coast of Santa Barbara, says
the health of a given reef can provide critical information about
the large marine ecosystem.

"Reefs are really sensitive to temperature and ocean acidity," he
says. "So, with global climate change happening, you having
rising sea levels happening, warmer water, and increased
acidification. It just serves as a proxy for marine health."

The Channel Islands are a Marine Protected Area, which means
people can dive, kayak, or snorkel in the area, but fishing is
prohibited during certain times of the year. Volunteers monitor
reef conditions year round, noting, for example, any changes in
its size or shape.

"You are characterizing the relief of the reef, which is like the
variation in depth along the transects," says Campbell. "And you
are also characterizing what is on the reef. So it might be
algae, invertebrate, or there might not be anything. So you note
that down, and the last thing you're characterizing is if it's
reef, cobble, boulder, or sand. And that is just how coarse the
grains are."

Reef Check works with non-profit organizations and government
agencies. With more than 1600 kilometers of coastline to cover,
rough seas, and limited government staff for underwater surveys,
Campbell and the other citizen scientists are filling a gap.

"In California, doing things like this, surveying the reefs so we
know what the reef diversity is, and then giving that data to
people in management and policy so they can actually use the data
and say, ‘We need to protect these areas if species diversity is
declining,'" he says. "I think that is sort of catching on now."

He said California is at the forefront of preserving marine
ecosystems.

Despite the decline in fish life, a recent report from Reef Check
also revealed encouraging signs of recovery in California's
network of Marine Protected Areas.

Image: Screen capture from the video version of the VOA News
story ... 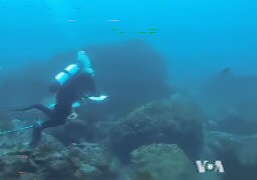 Both Beijing and Washington released reports in the past week
that weighed-in on the longstanding dispute over who owns the
scores of reefs, small islands and surrounding waters of the
resource rich South China Seas.

A U.S. State Department report examined the historic, geographic
and legal basis for China's vast claims in the strategic region,
concluding that they do not accord with the international law of
the sea, based on the U.N. treaty that China has signed.

That drew a sharp response from China's foreign ministry.

US to take no sides

Spokesperson Hong Lei said China's rights and claims in the sea
are formed by history and upheld by Chinese governments. Hong
said the U.S. report violates its commitment of taking no sides
in the South China Sea issue.

China's territorial claims in the South China Sea are outlined in
maps containing the so-called nine-dash line, a boundary that
encloses water, islands and other features of the resource-rich
sea.

This includes territory that has long been claimed by other
nations, including Vietnam and the Philippines.

The Philippines has appealed for international arbitration in the
dispute under the U.N. Convention on the Law of the Sea (UNCLOS).

China has until December 15 to defend its position, but Beijing
has already signaled that it will not participate in the process.

In a government report published Sunday, Beijing made the case
that the territorial disputes must first be worked out between
the nations before any international arbitration can move
forward.

China has long rejected having the United Nations or other
international body help adjudicate the dispute, preferring to
deal with the disagreements one-on-one with other nations.

The study by the U.S. State Department's Bureau of Oceans and
International Environment and Scientific Affairs (OES), said
China, in backing its claim, is using maps that date back to
1947, but the maps "lack precision" and are too inconsistent to
form as the basis for its historical claim to the waterway.

The study also said there is no "Chinese law, declaration,
proclamation or other official statement describing and putting
the international community on notice of a historical claim to
the waters within the dashed line."

It said that China's historical claim fails to meet the legal
tests used in international law for addressing these kinds of
disputes.

Carl Thayer, a professor at the Australian Defense Force Academy,
said while the Chinese paper seeks to influence judges in the
arbitration case without direct engagement, the U.S. study
presses China forcefully for clarification on its territorial
claims.

"China can take out lines, they can add them as they have,
around Taiwan, the 10th line," Thayer said. "So these lines are
not as fixed as China would like us to believe. So the U.S. has
set the ball rolling in helping push the legal argument further." 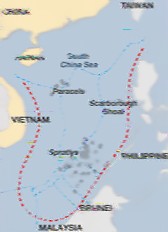 When the clock strikes midnight on New Year's Eve this year,
audiences in the Siberian city of Tomsk will likely lose a
familiar, independent source of information.

Tomsk TV-2, which is widely seen as one of the most respected and
professional regional television stations in Russia for the last
23 years, has been informed by the city's state-monopoly
television broadcast center that it will cease transmitting the
channel's signal as of January 1.

Although the reasons behind the threatened shutoff remain murky,
it comes against a background of state pressure against
activists, nongovernmental organizations, and nonstate media in
Russia by both national and local authorities.

The announcement by the Tomsk Regional Broadcasting Center
violates the terms of the contract with TV-2 itself, as well as
Russian antimonopoly legislation, says the station's lawyer,
Anastasia Olgovskaya.

The station has said it will appeal the decision. But Melani
Bachina, a Tomsk TV-2 presenter and producer who is also a
freelance correspondent for RFE/RL's Russian Service, says she
suspects this may come to nothing.

"No one is trying to be in contact with us," she says. "No one is
making any effort to talk to us about anything. No one has given
us any argumentation for why this is happening." The lack of any
effort to resolve the issue makes her feel the decision to close
down TV-2 "has already been made."

TV-2 representatives do not know what the reason for the
transmission center's decision is, but they are convinced the
impetus for the impending closure came from someone else.

"It is perfectly clear that the transmitters are only the
middlemen in this, that someone else stands behind this
decision," Bachina says. "But who is it? Of course, we have
suppositions, but since we have no facts or evidence, there is
nothing that we can do and we cannot appeal to those people or to
that person."

TV-2 editor Viktor Muchnik agrees. "Our story, like so many
stories in our country, is unfortunate in that the person acting
against us is anonymous," he says. "We are always dealing with
some sort of intermediary who says: 'I don't know anything. They
tell me from above what to do and I do it.' We can only guess who
is pulling the strings. But I know that the mere existence of
this channel over the years has been a problem for many people."

Earlier this year, the transmitter stopped broadcasting TV-2's
signal for about six weeks, claiming that some TV-2 equipment had
damaged equipment belonging to the transmission tower. That
blackout prompted the Russian Justice Ministry's national media
register to warn TV-2 that it would lose its license if it did
not resume broadcasting. Although the dispute was resolved,
activists saw it as a warning to the channel.

Bachina says she has no idea what will become of the station's
300 employees, adding that there is little chance TV-2 could
switch to cable or Internet broadcasting.

"The majority of our audience is elderly. They are people who
have been watching TV-2 for years," she says. "These are people
who, in one way or another, become the subjects of our reports.
These are people who do not even have cable TV -- they receive us
through terrestrial broadcasting. So, what is the point in
talking about switching to the Internet? These people will be
deprived of this source of information."


Image: From this Tomsk TV2 report about its history,
http://www.tv2.tomsk.ru/video/vospominaniya-ob-avguste-1991-v-sudbe-tv-2

a screenshot of its transmitting tower ...

I could hear the RMRC-broadcast on December 13th, although I was in the F2-Skip zone of 11690 kHz.
Fortunately, there were sporadic-E conditions between Germany and the Baltic States. The reflection points were located in the southern Baltic and Poland.
Here's a short audio recording with typical Sporadic-E-Fading (as in the summer Sporadic-E propagation in the VHF-II range): 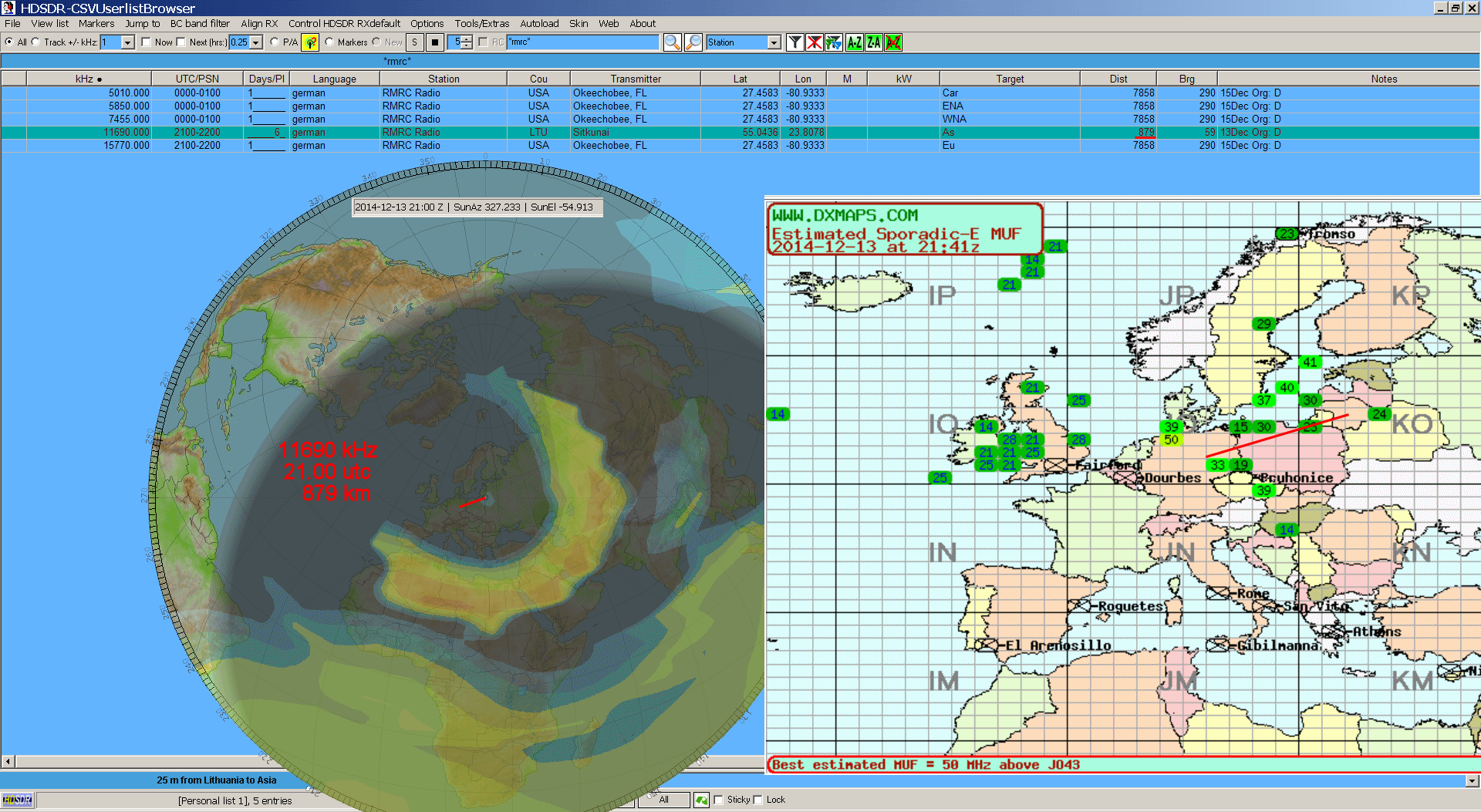