Welcome to program 101 of VOA Radiogram from the Voice of America.

** For Flmsg to work with Fldigi, in Fldigi: Configure > Misc >
NBEMS: Under "Reception of flmsg files" click "Open with Flmsg"
and under that indicate where your flmsg file is located.

We start with an image.

Here is the typical VOA Radiogram listener decoding the modes ...


Please put on your white laboratory coat, because this will be a
very experimental edition of VOA Radiogram.

The first experiment is to determine whether reducing the audio
level into the computer and Fldigi will lessen the tendency of
the RxID to set an incorrect audio frequency, e.g. near 1140 Hz
rather than the correct 1500 Hz.

In the following VOA News item, the RSID will be transmitted at
the beginning and four additional times during the story. Start
with your normal settings, then reduce the audio level into
Fldigi. Observe if the Fldigi's RxID places the audio frequency
on the correct 1500 Hz (plus or minust a few Hz) ...

LYONS, COLORADO - Trying to accurately forecast whether the day
ahead will be sunny or stormy sometimes bamboozles even
forecasters with the most sophisticated meteorological equipment.
An observation system called CoCoRaHS is working to improve
weather science, thanks to thousands of volunteers like Bunny
Pfau, who measure precipitation in their own backyards, then
share their data through the Internet.

"I think there's something kind of exciting about collecting
information that would, you know, if you collect it for enough
years, it represents climate data," said the Lyons, Colorado,
homeowner, who has been gathering such data for 15 years.


In September 2013, during a week of historic rainfall, when local
rivers overflowed and nearby buildings were swept away, Pfau
stayed home and checked her rain gauge.

"The night when the flooding began, there was about
three-and-three-quarters inches of rain that fell here in my yard
that day," she recalled. That was "the largest amount of rain, by
far, that I've ever recorded in a 24-hour period."

Measuring precipitation as it falls

CoCoRaHS, which stands for the COmmunity, COllaborative, Rain,
Hail and Snow network, began in 1998 at Colorado State
University. Its founder, Colorado's state climatologist, Nolan
Doeskin, explained that while radar and satellite data can
predict regional weather, they don't provide accurate
on-the-ground detail. That comes from the 20,000 CoCoRaHS
volunteers.

"By giving that ground validation, we can then improve the
relationships between what we're seeing from space or from a
remote transmitter, and relating it to what's happening at our
point, in our town, our city, our county or state," Doeskin said.

CoCoRaHS is the largest provider of daily precipitation
observations in the U.S. Still, Doesken said there's room for
more.

"We see that rainfall varies on a mile-to-mile, actually a
block-to-block basis, and if we had one citizen to do a
measurement in every square mile of the entire country, it
wouldn't be too many," he said.

Pfau and the other backyard weather watchers enter their
measurements on the CoCoRaHS site, where each entry appears as a
dot on a map. The dots, thousands each day, are color-coded to
indicate the amount of precipitation from gray for no rain,
through various shades of purple, blue and green, to red for a
downpour.


Meteorologist Matt Kelsch coordinates a two-county region of 200
CoCoRaHS volunteers, and he said the information they provide is
invaluable.

"Citizens can get a tremendous amount of information about rain
and snow that falls or rain and snow that doesn't fall. And
certainly it benefits the meteorological community, like the
community I am in," he said from his office at the University
Corporation for Atmospheric Research in Boulder, Colorado. "But
it also greatly benefits hydrologists, water resource managers,
even people that aren't trained as scientists that are dealing
with water resources."

There are four official National Weather Service sites in his
two-county region, Kelsch said, but they're too far apart to
account for what can be highly variable local conditions.
Fortunately, his volunteers send in a wealth of data from many
different sites.


"On a typical rainy or snowy day, we could get 100 reports from
CoCoRaHS in the two-county area," he said.

CoCoRaHS also has volunteers in most of the Canadian provinces,
Puerto Rico and, later this month, the U.S. Virgin Islands.


Image: A rain gauge used by a CoCoRaHS volunteer ...

Our second experiment today is the resumption, after several
months, of news in Flmsg format ...

LONDON&#8212;A newly published report indicates Iran and the United States have increased their cyberattacks on each other,
even as their top diplomats are working toward an agreement to guarantee Iran does not develop a nuclear weapon and to free
Iran from international sanctions. The development is part of a growing global trend.

Top U.S. and Iranian diplomats have been holding almost weekly meetings to try to finish the accord by their deadline at the
end of March. But behind the scenes of collegiality, an active cyberwar is raging.

The report says Iran learned from a virus called Stuxnet that was inserted into its nuclear program, allegedly by U.S. and
Israeli intelligence services in 2012.

That incident may have shown Iranian leaders the value of cyberwar capabilities, as compared to expensive, controversial and
highly deadly nuclear weapons, according to cyberwar expert David Stupples of City University London.

Iranians "have now realized they have a much stronger weapon at hand," he said. "If they pour resources into that, they can
continually attack and continually get payoffs from their activities, quite cheaply."

A basic form of cyberattack is shown in a video produced by Stupples&#8217; team from an actual incident.

The website services each incoming requests, "and you see the answers going back. Where it goes to start being bright, it
means the website is becoming quite heavily loaded," said Stupples. "So all the requests are coming in, but nothing is going
back. Essentially, the website is completely closed down."

Such overload, or "denial of service" attacks, are irritating. But real problems come when cyberattacks steal or destroy
data, as happened in the attack on Sony Pictures last year, allegedly by North Korea. Such attacks also could put people at
risk by overheating power plants or taking services like highway signals or air traffic control off line.

A year ago, the new head of the U.S. National Security Agency, Admiral Mike Rogers, told Congress cyber warfare is here to
stay.

"Clearly, cyber will be an element of almost any crisis we are going to see in the future," said Rogers. "It has been in the
past. I believe we see it today in the Ukraine, we've seen it in Syria, Georgia. It increasingly is becoming a norm."

There also is concern that terrorist groups could move into the cyber domain, said Rachel Briggs, an analyst with London&#82
17;s Institute for Strategic Dialogue.

"We know that extremists are trying to use technology in the same way that they use wires and batteries," Briggs said. "They
have not ... as far as we know been successful. It will only be a matter of time."

Cyberattacks are inexpensive, secret, deniable and, while frequent, are largely unknown to the public potentially making
them more attractive to terrorists and governments than conventional or nuclear weapons.

WASHINGTON/MIAMI - The White House has propt Radio
Marti, a U.S. government-controlled broadcaster created in part
to undermine communist rule in Cuba, into a separate entity as
Washington seeks rapprochement with Havana.

The proposal, buried in the federal budget released last month,
was made some six weeks after the United States and Cuba agreed
on December 17 to embark on an effort to restore diplomatic ties
and normalize relations after more than 50 years of enmity.

U.S. officials said the proposal was unrelated to the Cuba
outreach and aimed at modernizing the broadcaster.

However, it has troubled critics of the thaw with Cuba, who view
the proposed change as part of what they regard as the White
House's abandonment of the fight against the authoritarian Castro
government, a congressional aide said.

More details on the proposal will be unveiled on Wednesday, when
the administration releases an additional budget document.

A legacy of the U.S. Cold War effort to reach out to people
living under Communism and erode support for their rulers, Radio
Marti, which beams radio, TV and online news to Cuba, has been
accused of anti-Castro bias and is deeply resented by Havana.

Under the plan, the Miami-based broadcaster, which is part of the
Broadcasting Board of Governors, an independent federal agency,
would become a separate entity along with unspecified parts of
Voice of America's (VOA) Spanish-language service.

The entity would cease to be part of the U.S. government, though
it would become a "grantee" receiving federal funding.

The proposal does not specify how it would be structured beyond
that it would a "private, nonprofit organization."

The proposal would have to be approved by the Republican-led
Congress, where some members critical of U.S.-Cuban detente say
Washington appears to be giving up its leverage over Havana by
easing sanctions without getting sufficient commitments to
improve human and political rights in return.

"There is no connection between the proposal in the budget and
the policy changes announced December 17 or the Cuban
government's position with respect to Radio/TV Marti," said a
senior U.S. official who declined to be identified, adding that
the aim was "to make it more effective in carrying out its
mission."

Asked for the reasoning behind the proposal, BBG spokeswoman
Letitia King said the idea was to give the broadcaster greater
flexibility on contracting, acquisitions and administration by
removing it from regulations that govern the federal government.

King said that if the change were approved by Congress, the
transition would take at least two years.

Philip Seib, a professor of journalism and public diplomacy at
the University of Southern California, said he doubted that
Congress will go along with the proposed changes to Radio and TV
Marti, despite what he called the stations' ineffectiveness.

"I don't know that Congress is going to be eager to do anything
that changes that status quo," particularly since many
Republicans oppose Obama's opening to Cuba, said Seib, who has
written extensively about international broadcasting.

Kim's note: If Radio and TV Mart become a "grantee," their
organization and structure would be similar to that of Radio Free
Europe/Radio Liberty Inc and Radio Free Asia Inc, both of which
are US government funded corporations.

In other news about U.S. international broadcasting, see this
Broadcasting Board of Governors announcement about the
resignation of Andy Lack, the BBG's first CEO, after six weeks on
the job. Mr. Lack is reportedly returning to NBC ... 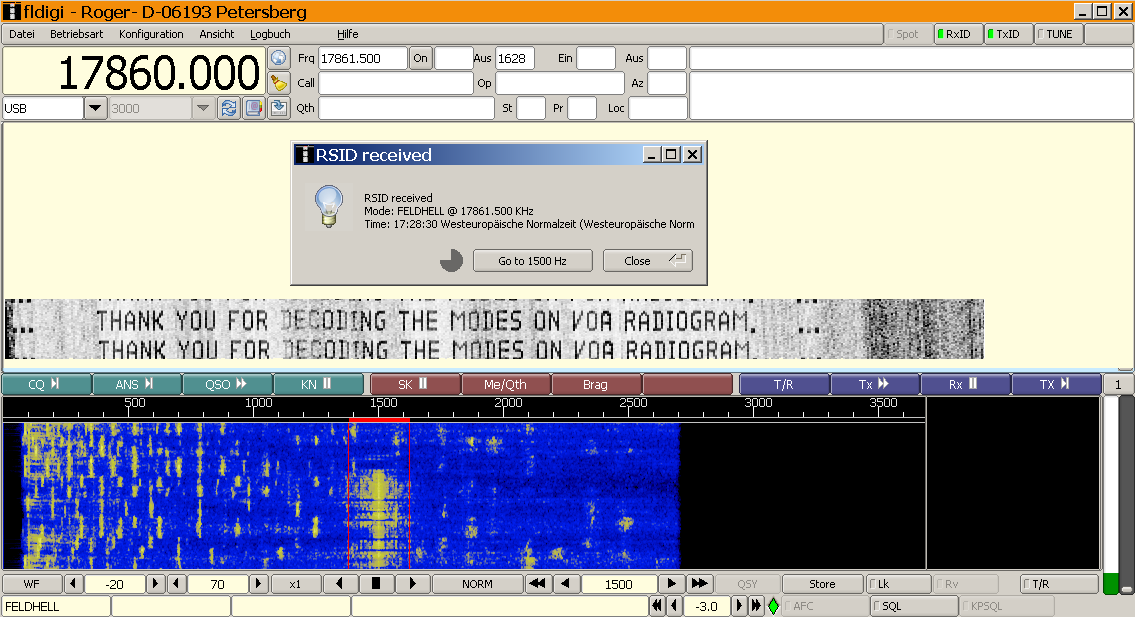