Welcome to program 109 of VOA Radiogram from the Voice of
America.

A new report says worldwide working conditions for the news media
have fallen sharply to their lowest point in more than 10 years.
The study says journalists are facing more restrictions from
governments, militants, criminals and owners of the media.

While the spread of smartphones and the internet means news is
easier than ever to access, journalists are finding themselves in
courtrooms, behind bars, intimidated, even silenced, according to
a report by the independent watchdog organization, Freedom House.

"Unfortunately, the news is very bad. Press freedom suffered a
global decline in 2014. It is the worst decline in a decade.
Things are getting bad and they are getting bad even faster than
they have in the past," said Vice President for Analysis Vanessa
Tucker.

The worst offenders on the organization's ranking of 199 nations
or territories were North Korea, Uzbekistan, Turkmenistan,
Belarus, Cuba, Syria, Iran and Crimea. Norway, Sweden and
Belgium topped the list.

Overall, Freedom House says just 14 percent of the world's
population lives in free countries "where coverage of political
news is robust, the safety of journalists is guaranteed, state
intrusion in media affairs is minimal, and the press is not
subject to onerous legal or economic pressures."

The report attributed the decline in press freedom to an increase
in restrictive laws against the press. It said these laws were
often passed ostensibly for national security reasons.

Another reason cited for the deterioration of media liberties was
the inability of local and foreign journalists to physically
access and report freely in areas such as protest sites and war
zones.

While much of North America was rated as having a free press,
much of Latin America was either partially free or not free.

According to Freedom of the Press 2015, Mexico intimidated
journalists and passed a controversial communications law.

The report also noted rollbacks in freedom in Honduras, Peru,
Venezuela, and Ecuador. Press freedom was also ranked poorly in
Cuba, despite the U.S. move to re-open diplomatic relations with
the Communist country.

"[Despite] the resulting release of over 50 political prisoners
in late December, journalists were still behind bars during 2014,
and official censorship remained pervasive, leaving Cuba as the
worst performer in the region with a score of 91," it noted.

The United States was criticized for the rough treatment of
journalists by police during protests in Ferguson, Missouri.

The report also said "press freedom advocates remained concerned
about certain practices and policies of the federal government,
including the Obama administration's relatively rigid controls on
the information coming out of the White House and government
agencies."

In the Asia-Pacific region only five percent of the population
had access to free media, while the rest were split evenly
between partly free or not free.

China's scored its lowest since the 1990s, as authorities jailed
journalists and tightened control over media outlets.

"One of the areas that we noted that is a real problem globally
and regionally right now is the impact of actors like China on
their neighbors. So we saw that actions that China took had a
negative impact, of course, in Hong Kong, in Taiwan and some of
the other neighboring countries," said Tucker.

Myanmar, also known as Burma, experienced a reversal in press
freedoms in 2014, a trend that follows several years of
improvement following the end of direct military rule in 2011.

"This year we saw a number of journalists who were not only
arrested or detained but also received prison terms. Some foreign
journalists also encountered harsher visa restrictions," said
Sarah Cook, a senior East Asia research analyst for Freedom
House.

The report was largely negative about developments in the Middle
East and North Africa, where a wave of street protests, referred
to as the Arab Spring, has produced little results in the way of
increased freedom.

"After historic gains in the Middle East in 2011, only one
country has continued to make progress toward fulfilling the
promise of the Arab Spring. Tunisia registered the best score of
any Arab country in over a decade, although it remained Partly
Free," the report said.

Only two percent of those living in the Middle East and North
Africa have a free press environment, Freedom House estimates. It
particularly highlighted declines in Egypt, Libya, Syria, and
Iraq - countries that have seen increased militant activity in
the past year.

In sub-Saharan Africa only three percent of the population is
exposed to information from free media.

More than half of the press is partly free and nearly 40 percent
are not free.

Sub-Saharan Africa was the only region to show improvement in
press freedom in 2014, although the report said "most countries
that earned improvements started from a low baseline, such as
Central African Republic and Guinea-Bissau."

The Freedom House report says the Eurasia region's average score
remained the worst in the world.

More than 80 percent of the media was judged as not free and less
than 20 percent partly free.

In Russia, the report says, there was a crackdown on independent
voices inside the country and in neighboring nations.

"One of the big areas of troubling impact that we saw was in
propaganda. So completely fabricated propaganda such that people
inside of Russia have essentially no idea what is going on in
conflicts like that in Ukraine," said Tucker.

Europe was the group's highest-ranking region, although it noted
that the region experienced the second-largest decline over the
past decade.

Freedom House says the growing threats to the media are a stark
challenge to democratic values around the globe.

In response to the aftermath of the earthquake in Nepal, the BBC
World Service is now broadcasting additional programming on
shortwave in both Nepalese and in English.

Liliane Landor, Controller of World Service Languages, says:
"Information is vital and we are doing all we can to make sure
that our audiences in the affected areas receive their local and
regional news as well as 'Lifeline' programming designed to give
practical information to help deal with the aftermath of the
earthquake."

The Nepali language programme is available on shortwave as
follows:

The availability of World Service English on short wave to
Northern India and Nepal has been extended with the service now
starting one hour earlier than normal at 23.00 GMT.

A recent report underscores the proliferation of cell phone use
in sub-Saharan Africa.

According to the Pew Research Center survey, Africa has all but
skipped the "landline stage of development."

The growth has been exponential.

In 2002, only one tenth of the populations of Tanzania, Uganda,
Kenya and Ghana owned a mobile phone, said Pew.

"Across the seven countries surveyed, roughly two-thirds or more
say they own a cell phone," according to Pew. "Ownership is
especially high in South Africa and Nigeria, where about
nine-in-ten have a cell phone."

Mobile phone penetration in South Africa and Nigeria, in fact,
rivals that of the U.S., where 89 percent of American adults own
a cell phone. Over 7,000 Africans were surveyed in Ghana, Kenya,
Nigeria, Senegal, South Africa, Tanzania and Uganda from April to
June last year.

African mobile phone owners use them mostly to sent text messages
and to take pictures or video, the survey revealed. In some
countries, such as Kenya, Uganda and Tanzania, the survey found
that mobile banking was a popular use of cellphones.

Additionally, the survey found that accessing social networks was
a popular use of mobile devices, particularly in Nigeria and
South Africa.

Smartphones are less common, but are gaining ground, according to
Pew. About one third of South Africans reported having a
smartphone, compared to about one in four Nigerians. Sixty-four
percent of Americans have a smartphone, the survey said.

"Three-quarters of Ugandans who speak or read at least some
English own a mobile phone, while only about half of those with
no English language skills own one," according to Pew. "And
one-third of English-speaking Nigerians own a smartphone,
compared with 2 percent of Nigerians who do not have the ability
to read or speak at least some English."

Landline penetration, by comparison, "is close to zero," the
survey revealed. Only about 2 percent reported having one. In the
U.S. 60 percent of Americans have a landline.

As every computer owner knows, when their machines run a complex
program they get pretty hot. In fact, cooling the processors can
be expensive, especially when you're dealing with huge banks of
computer servers. But what if that energy could heat private
homes? A Dutch energy firm aims to do just that.

Data centers of large Internet firms, such as Google, Apple,
Microsoft and others, contain thousands of computer servers. As
they process information they generate enormous amounts of heat
requiring cooling towers that dissipate it into the atmosphere.

A Dutch firm thinks paying for electricity to run the servers and
then paying again to cool them is a waste of energy.

Boaz Leupe, CEO of the start-up Nerdalize, says it's actually
quite simple.

"We don't actually have to build the data center, which saves a
lot of costs in infrastructure and we don't have the cooling
overhead, plus that you have the environmental benefit, that the
kilowatt hour you are using is used twice, once to heat the home
and once to compute the clients task without the cooling
overhead," says Leupe.

The company developed what it calls an e-Radiator, a computer
server that also works as an alternative heating source. Leupe
says that five Dutch homeowners are experimentally using them in
their homes.

"We reimburse the electricity the server uses, and that we can do
because of the computer clients on the other side, and, in that
way, home owners actually get heating for free, and computer
users don't have to pay for the overhead of the data center,"
says Leupe.

One of the participants in the year-long experiment, Jan Visser,
says the amount of heat produced by e-Radiator depends on the
work being done by the server's processors so it cannot be used
as the primary source. But he is ready to try it.

"If it gives good enough warmth, you can use less of your
existing central heating, and there is the chance for a home
owner to pay less bills."

Nerdalize says e-Radiators generate temperature of up to 55
degrees Celsius and could save up to $440 in annual heating
costs. 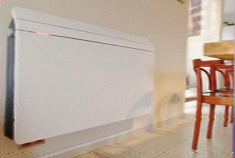